Past present: Patriarchy and women by Mubarak Ali

Dr. Mubarak Ali - PhD (on Mughal Period, India) from Ruhr University, Bochum, Germany. Former head of history department of Sindh University - Pakistan. He was the director of the Goethe Institute in Lahore, until 1996. 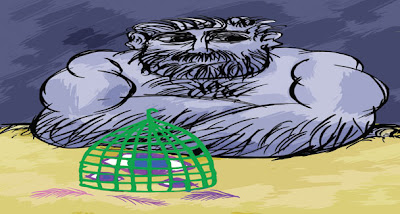 ‘With the patriarchal family we enter the field of written history.’ — Marx & Engels.

Simply defined, patriarchy is the rule or control of the father over the women of the family. Maria Mies in Patriarchy and Accumulation on world scale extends the definition of patriarchy by saying that today male dominance goes beyond this rule of the father to include husbands, male bosses, and ruling men in most societal institutions and in politics and economics. She contends that historically patriarchal systems were developed at a particular time, by particular people in particular geographical regions. Their main mechanisms of expansion were robbery, warfare and conquest.

There are two interpretations regarding the emergence of patriarchy: the Marxist and the Feminist. Friedrich Engels points out that the emergence of surplus and development of the idea of male inheritance transformed the relationship between men and women. The system of private property transformed women’s role ‘from an equal partner to a subordinate wife’. Class exploitation and sexual repression emerged together to serve the interests of propertied class. Strongly influenced by evolutionist thinking, Engels separates earlier stages as pre-history from actual human history, which, according to him, begins only with civilisation. This means that it begins with full-fledged class and patriarchal relations.

On the other hand, the feminist interpretation is that patriarchy is the outcome of a historical phenomenon. It contests the Marxist view by saying that the social relations of patriarchy emerged when the mother gave birth to a child and fed him/her which was a truly human, i.e. conscious, social activity.

Patriarchal relations developed with men and women’s relation to nature. Women’s relationship with nature was productive while that of men was destructive. Tools such as spear, bow and arrow, axe and hammer, used by men were purely for killing purposes, whereas women used tools such as a hoe or a digging stick to cultivate land and to gather plants.

Historically, with the emergence of patriarchy the social status of women became subordinate to men. Historical evidence suggests that men dominated women with their coercive weapons. The introduction of private property completely enslaved women; they became responsible for producing heirs to the property and keeping the family line in continuity. Their job was to procreate, nourish and train the male issues for the sake of the family; they were regarded as cattle, as breeders. It is plausible that the establishment of harems, the kidnapping and raping of women, the patriarchal lines of descent and inheritance were part of the new mode of production. The agriculturists used female slaves as they were productive in two ways: as agricultural workers and as producers of more slaves. The feudal and capitalist systems modified the means of violence and replaced them with institutions like the patriarchal family and the state, the manager, and also powerful ideological systems. Above all patriarchal religion, law and medicine have defined women as part of nature to be controlled by men. As the lands that were properties of feudal lords so did the bodies of women not belong to themselves but to their lords. Women were the inexhaustible reservoir of human energy. Under patriarchy the socio-cultural and religious customs were developed to further family interests, to exploit women and to use them politically.

Therefore, practices of hetaerism, prostitution and adultery coexisted within monogamous marriage. Women were accused, despised and regarded as outcasts. At the same time adultery became an unavoidable social institution that was denounced, severely penalised, but was impossible to suppress.

The institution of marriage was fully utilised for the sake of the preservation of the family where girls were forced into undesirable marriages to maintain amiable relations with an enemy’s family. This was possible because of the various sacrifices made by women. However, these sacrifices failed to raise the status of women; they remained subordinated. History is replete with examples of royal princesses being married to the conquerors after defeat in order to maintain diplomatic relations. For example, Babur’s sister, Khanzadah, was married to the Uzbek ruler Shaibani Khan in a deal to allow the besieged Babur to escape from Samarqand. Also, Mary Louis, the Austrian princess married Napoleon against her wish to save the kingdom from his hands. Women were also given away as gifts; conquered tribes often presented their girls to the victors. In the Eskimo tribes there was a custom to allow the guests to sleep with the host’s wife.

Patriarchy moulds itself according to respective cultures and communities. Patriarchy also creates a division between the public and the private, between ‘world’ and ‘home’. It is actually a gender division, the public world being male and the private world being female and it is one which affects women most profoundly. Patriarchy underestimates the capabilities of women. It pays them less for doing the same work. It tells them that girls are different from boys in every way, not only biologically but also temperamentally. It also places a high value on virginity and purity, and imposes chastity in women as the highest virtue. And yet it is patriarchy that tells men that they can beat, abuse and rape women. In fact, it tells women that it is their own fault if they are raped, beaten or abused.

Patriarchy has established a system of control over the world that places more men than women in positions of power and authority. Patriarchy is visible in the structures of the institutions that guide and govern our lives —within the family, at school and universities, in the church, temple and mosque; in marriage and the work place, in the factories and in the fields, in the state and in the institutions of local government; in the armed forces and in the civilian defence squads; in the mass media, in the courts of law (Ibid).

Patriarchy socialises women so that they accept hierarchies and other structures of power and control without ever daring to question them. Patriarchy uses violence and the threat of violence in many overt and covert ways in order to maintain its hold on power (Ibid).

However, it would be encouraging to have an optimistic approach towards the struggle against patriarchy. “Patriarchy enables us to link our present struggles to a past and thus can also give us hope that there will be a future. If patriarchy had a specific beginning in history it also has an end,” writes Maria Mies.