2009: KARACHI: MQM Quaid Altaf Hussain has said that his party respects the Supreme Court judgment on the National Reconciliation Ordinance. “We respect the Supreme Court judgment and we believe in the freedom of judiciary,” he was quoted as saying in a short statement issued here by the party’s Rabita Committee. MQM leader Mohammad Anwar told The News from Dubai that others should also respect the verdict. Meanwhile, Sindh Minister for Local Bodies Agha Siraj Durrani said he was ready to face all the cases against him, adding his name was wrongly placed on the NRO list. When Federal Minister for Ports and Shipping Babar Ghauri was asked to comment on the issue, he said the MQM Coordination Committee will issue an official statement from London. REFERENCE: MQM respects SC judgment, says Altaf Fasahat Mohiuddin Thursday, December 17, 2009 http://www.thenews.com.pk/TodaysPrintDetail.aspx?ID=213782&Cat=2&dt=12%2F17%2F2009 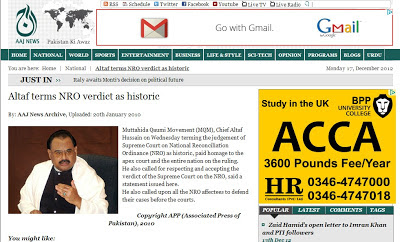 2007: Altaf wants CJ to tender resignation: KARACHI, May 12: Muttahida Qaumi Movement chief Altaf Hussain on Saturday asked Chief Justice of Pakistan Iftikhar Muhammad Chaudhry to resign from his post for violating his oath of office. “Mr Chief Justice, you had breached the oath taken under the Constitution by taking another oath under the Provisional Constitutional Order. I demand that you make an apology to the whole nation for this act, tender resignation and then come forward for the cause of the independence of the judiciary,” he said while addressing a rally called by the party against what was described as political jugglery in the name of the independence of the judiciary. Mr Hussain was of the view that opposition political and religious parties were using the issue of CJ for dissolution of the government. “This should be stopped forthwith as solidarity of Pakistan lies in a true democratic government,” he added.A large number of people reached M.A. Jinnah Road to take part in the MQM rally. Mr Hussain, who was sad and grieved over the loss of lives on Saturday, said that no untoward incident had taken place in any part of the city but with the landing of CJ’s flight at Karachi Airport the situation started deteriorating. “After noon when the CJ’s plane landed in Karachi, terrorists started targeting MQM rallies in different areas by firing indiscriminately.” He informed the participants that over a dozen workers of the MQM were targeted while hundreds of workers and supporters were injured. However, he declared that nothing could stop the struggle of the MQM for the rights of the oppressed people. The MQM leader said that the Sindh Home Department requested the CJ to cancel his visit to Karachi on the basis of certain intelligence reports but he did not accede to the request. “I believe now you [the Chief Justice] are feeling relaxed after so many people lost their lives due to your programme.” “Mr Chief Justice, kindly recognise political jugglers around you. On the occasion of your arrival, miscreants and enemies of the country killed innocent people,” he said. He wondered why the participants of a procession in Punjab to welcome the CJ in Lahore were raising the slogans of “Go Musharraf Go” instead of “Go Military Go”. REFERENCE: KARACHI: Altaf wants CJ to tender resignation May 13, 2007 Sunday Rabi-us-Sani 25, 1428 http://archives.dawn.com/dawnftp/72.249.57.55/dawnftp/2007/05/13/local3.htm

2010 : MQM retreated on NRO on US, UK pressure KARACHI: Muttahida Qaumi Movement (MQM) took back its support of government for NRO on pressure from the US and Britain, according to a cable leaked by WikiLeaks. According to a US State Department cable released by WikiLeaks, Interior Minister Rehman Malik suspected that the “establishment” was out to get President Asif Zardari and that the Muttahida Qaumi Movement (MQM) was being influenced by the US and the UK. In a meeting held on November 9, 2009, Malik claimed to then US ambassador to Pakistan Anne Patterson that the MQM had repeatedly stated that both the US and the UK had urged the party to oppose the National Reconciliation Ordinance (NRO)  a move that led the government to withdraw the legislation from parliamentary consideration and placed the future of Zardari at risk. In a November 9 meeting with Ambassador Patterson, Interior Minister Rehman Malik requested that the USG (United States government) issue a public statement in support of Pakistani democracy.

He suggested that such a statement would be useful in protecting President Asif Ali Zardari from military-induced pressure for Zardari to leave office. In addition, it would help dispel persistent charges from the Muttahida Quami Movement (MQM) that the United States and the United Kingdom had urged it to withdraw support for the National Reconciliation Ordinance, thereby placing Zardari at risk. Malik assessed that Saudi Arabia and the Pakistan Muslim League-Nawaz (PML-N) were cooperating with the military and MQM to bring down President Zardari. Despite these charges, Malik was optimistic that the Supreme Court would not/not strip Zardari of his presidential immunity and suggested that even if it did, the government would simply cease prosecution of Zardari`s cases, thereby allowing him to continue to hold office. Interior Minister Rehman Malik met on November 9 with Ambassador Patterson to provide a read-out of his meetings with senior officials of the Muttahida Quami Movement (MQM) in Dubai. Throughout the meeting, Malik was clearly nervous that the USG was distancing itself both from him and President Zardari. Malik claimed that during the course of his Dubai meetings, the MQM had repeatedly stated that both the United States and the United Kingdom had urged the party to oppose the National Reconciliation Ordinance (NRO) — a move that led the government to withdraw the legislation from parliamentary consideration and placed the future of President Zardari at risk. Malik claimed that the MQM stated it had received this message during the Sindh Governor`s recent trip to the United States and that Altaf Hussain had been approached by the British government in London.

Ambassador strongly denied these allegations, stating that the USG had not/not had any such discussions with the Sindh Governor. Minister Malik inquired as to whether the Ambassador was aware that the “establishment” — local short-hand for the military and the intelligence services — was involved in working against the NRO and for President Zardari`s departure. Ambassador told Rehman that we were aware of such allegations. Minister Malik reported that the MQM had told him directly in the Dubai meetings that the military was involved, although Malik personally did not/not believe that Chief of Army Staff (COAS) Ashfaq Pervaiz Kayani was involved in the plotting. Malik also claimed that the MQM was meeting regularly with the Pakistan Muslim League – Nawaz (PML-N) and that PML-N leader Nawaz Sharif was, in turn, pressuring Chief Justice Iftikhar Chaudhry to disqualify President Zardari. Malik also assessed that Saudi Arabia was working to unseat President Zardari. Malik intended to visit Prince Muqrin bin Abdul Aziz, Chief of Saudi General Intelligence, in Saudi Arabia and then travel on to London to meet with MQM Convener Altaf Hussain. Malik suggested that the best way to deal with military pressure would be for President Zardari to make internal changes within the military hierarchy. Malik proposed that Zardari recreate the Deputy Chief of Army Staff position and move Inter-Services Intelligence (ISI) Director General Ahmad Shuja Pasha into that position in March 2010. Zardari could then commit to elevating Pasha to COAS in October 2010 on the expiration of Kayani`s term. Malik suggested that Kayani could then be moved to Chairman of the Joint Staff. Comment: Malik seemed to believe that ISI DG Pasha was unilaterally behind the push to oust Zardari — which we know is not/not the case. Despite these concerns, Malik reiterated the government`s line that Zardari is not in any real danger on expiration of the NRO. He asserted that the Chief Justice would not/not revoke Zardari`s presidential immunity. Even if he did, Malik claimed that the Interior Minister can instruct prosecutors to dismiss charges in any court case. He shared that, in one of his own corruption cases, this had been done, and that in another case, the Supreme Court had ruled his imprisonment illegal. Malik also added that President Zardari had the ability to pardon anyone. Malik pressed the Ambassador for issuance of a strong statement from the United States. Ambassador inquired as to the content and the audience. Malik suggested that it be a public statement saying that the United States supported democracy in Pakistan. Malik was clearly worried that President Zardari and his inner circle of advisors — including Malik — had lost the support of the international community. Malik appeared to believe that such support was essential for their survival in the face of military plotting against them. Malik`s view that ISI DG Pasha is behind the moves against President Zardari and that COAS Kayani is not involved is either naive or intentionally misleading. It would be impossible for Pasha to move without Kayani`s acquiescence. Malik`s views on Zardari`s legal troubles presuppose that Chief Justice Iftikhar Chaudhry will be bound by normal interpretations of the law and precedent. Such an assumption ignores Chaudhry`s penchant for ignoring both in recent rulings and his personal animosity towards Asif Ali Zardari. REFERENCES: MQM retreated on NRO on US, UK pressure December 05, 2010 http://www.thenews.com.pk/article-6580-MQM-retreated-on-NRO-on-US,-UK-pressure Ansar Abbasi on Altaf Hussain 2 Feb 2009 Daily Jang WikiLeaks episode III: ‘Britain, US pressing MQM to oppose NRO’ http://tribune.com.pk/story/85786/wikileaks-episode-iii-britain-us-pressing-mqm-to-oppose-nro/ MQM took back NRO support on US, UK pressure: WikiLeaks | The Nation December 05, 2010, http://www.nation.com.pk/pakistan-news-newspaper-daily-english-online/international/05-Dec-2010/MQM-took-back-NRO-support-on-US-UK-pressure-WikiLeaks
Posted by Aamir Mughal at 12:13 AM