Military Operation 2013 against Terrorists in Karachi 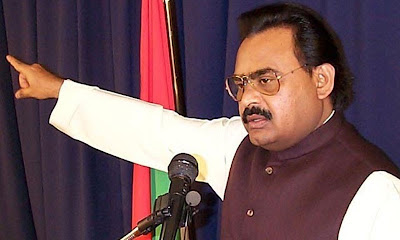 KARACHI: Muttahida Qaumi Movement (MQM) chief Altaf Hussain demanded Tuesday that the administration of Karachi should be handed over to army personnel, DawnNews reported. In a statement issued from London, Hussain said the situation of Karachi was worsening day by day and prime minister Nawaz Sharif should hand over responsibilities of the city to army personnel. Hussain said the Sindh government, which was led by the Pakistan Peoples Party (PPP), had failed to provide protection to residents of Karach’s Lyari neighbourhood despite the fact that the area was steeped in violence and gang-wars and several people had died due to terrorist attacks. Earlier this month, Pakistan's president-elect Mamnoon Hussain indicated in a TV program that the army’s assistance could be sought for restoration of peace in Karachi. Mamnoon moreover said if MQM was a patriotic party, it would not have objections to seeking army persons for provision of security in Sindh’s metropolis. The president was of the view that extreme measures would have to be adopted in order for peace to prevail in Karachi. Karachi is home to multiple conflicts that frequently turn violent, including gang wars, ethnic and political rivalries. Militants are said to use the city as a hiding place and a source of funds obtained through bank heists, extortion and kidnapping for ransom. Moreover, political parties have increasingly started using the city as a battleground for their conflicting interests. REFERENCE: MQM chief demands handing over Karachi to army 2013-08-27 11:38:40  http://dawn.com/news/1038700/mqm-chief-demands-handing-over-karachi-to-army

The Constitution of the Islamic Republic of Pakistan

(1) [650] The Armed Forces shall, under the directions of the Federal Government, defend Pakistan against external aggression or threat of war, and, subject to law, act in aid of civil power when called upon to do so.

(2) [651] The validity of any direction issued by the Federal Government under clause (1) shall not be called in question in any court.

(3) A High Court shall not exercise any jurisdiction under Article 199 in relation to any area in which the Armed Forces of Pakistan are, for the time being, acting in aid of civil power in pursuance of Article 245:

Provided that this clause shall not be deemed to affect the jurisdiction of the High Court in respect of any proceeding pending immediately before the day on which the Armed Forces start acting in aid of civil power.

(4) Any proceeding in relation to an area referred to in clause (3) instituted on or after the day the Armed Forces start acting in aid of civil power and pending in any High Court shall remain suspended for the period during which the Armed Forces are so acting. REFERENCE: Part XII: Miscellaneous Chapter 2: Armed Forces. http://www.pakistani.org/pakistan/constitution/part12.ch2.html
The Constitution of the Islamic Republic of Pakistan http://www.pakistani.org/pakistan/constitution/


MQM Condemns Nawaz Sharif on Military Courts in... by SalimJanMazari

Wednesday, January 04, 2012 - Karachi—Sindh Minister for Commerce & Industries Rauf Siddiqui has strongly condemned Nawaz Sharif’s statements in which he said that his party would again establish military courts in Sindh if voted to power in the next general election. In a statement Mr. Rauf Siddiqui said that Nawaz Sharif has made the statement just for the lust of power.He said he was surprised to see Nawaz Sharif statement about military courts and asked him on whose direcyives he is making such promises. Rauf Siddiqui said that Nawaz Sahrif’s own cases should be taken up in the Military Courts. He said Sharif is not changed despite the fact that he has lost a lot due to his non-democratic behavior. Rauf Siddiqui demanded that Nawaz Sharif should be punished for making the announcement to establis military courts in Karachi. ISLAMABAD: The statement of Pakistan Muslim League-N President Nawaz Sharif in connection with formation of military courts came under detailed discussion on Tuesday in the National Assembly where it was severely criticized by the treasury benches, Geo News reported. However, PML-N MNAs defended the statement of their leader. Muttahida Qaumi Movement's Haider Abbas Rizvi wondered 'what enmity Nawaz Sharif harboured against Karachiites that he wants to have military courts in the city'. "Who is responsible for the blood of MQM workers who were extra-Constitutionally hanged by military courts," he asked. PML-N's Mehtab Abbasi said he deemed it inappropriate of the statement being associated with Nawaz Sharif, who had waged a long struggle against dictatorship in the country. Abid Sher Ali of PML-N said for the past nine years MQM had its Governor in Sindh. "Is the Governor ready to accept responsibility of 4500 people murdered during this period?" he asked. —Online MQM condemns Nawaz statement on militray courts MQM condemns Nawaz statement on militray courts and http://www.pakistantoday.com.pk/2012/01/03/news/national/mqm-condemns-nawaz-statement-on-military-courts/ Military courts hanged workers extra-judiciously: Rizvi 04 January 2012 MQM Deputy Parliamentary Leader Haider Abbas Rizvi strongly condemns Nawaz Sharif's Statement regarding Military Courts for Karachi. Added by CC on January 3, 2012 at 9:23pm http://www.allaboutmqm.org/photo/mqm-dy-parlimentary-leader-strongly-condemns-nawaz-shareef-s

ISLAMABAD: Muttahida Qaumi Movement (MQM), a major opposition party in the National Assembly having an electoral mandate from Karachi, on Tuesday called upon the government to invoke Article 245 of the Constitution for handling the prevailing law and order situation in the city. “The situation in Karachi is worsening. Killings, robberies, kidnappings for ransom and other crimes have paralysed the city. Criminals are being patronised and the situation has gone beyond control,” claimed Dr Farooq Sattar, MQM’s parliamentary leader in lower house of the parliament. REFERENCE: MQM urges govt to invoke Article 245 in Karachi 2013-08-27 19:32:26 http://dawn.com/news/1038726/mqm-urges-govt-to-invoke-article-245-in-karachi 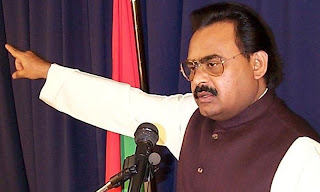 LONDON, Oct 12: Muttahida Qaumi Movement chief Altaf Hussain has asked the army chief and the its leadership to restore democracy in the country at the earliest. "This (restoration of democracy) is in the interest of the country as well as the army," Mr Hussain told Dawn while commenting on the dismissal of Nawaz Sharif government in Pakistan. The MQM chief held former Prime Minister Nawaz Sharif responsible for the current situation and said that his "autocratic and dictatorial attitude" forced the army to step in. "Nawaz Sharif had left no choice for the army," he added. He said the foremost task of any government installed in Pakistan should be to hold accountability of all corrupt politicians who have looted the national wealth. He said the army should move fast towards restoring democracy, adding that the army had been forced to take the action, which was not liked by democracy-loving people like him. Asked whether he would favour holding of fresh elections within 90 days, he said he would support the restoration of democracy in the country as well as demand accountability of those who looted the national wealth, suppressed the judiciary and subjugated the national press. He said Nawaz Sharif had resorted to extra-constitutional measures to suppress the opposition parties, particularly the MQM in Sindh. "He (Nawaz Sharif) must be tried for extra-judicial killings that took place during his tenure in Pakistan in general and Karachi in particular." Asked whether he would support a caretaker government set up for a year or two to hold across the board accountability of all politicians before holding the next elections, he said it was too early to say that. "I am waiting for the speech of the army chief," he said. "But whatever decision will be taken, will be by the central coordination committee and not by me." REFERENCE: Altaf asks army to restore democracy Week Ending : 16 October 1999 Issue : 05/42 DAWN WIRE SERVICE https://dl-web.dropbox.com/spa/zohkohb0i282t94/Area%20Studies/public/SouthAsia/SAserials/Dawn/1999/16oct99.html#alta 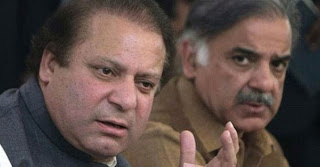 KARACHI: The legal battle between the main opposition Pakistan Muslim League (N) and key partners in the ruling coalition, the Muttahida Qaumi Movement, further intensified Saturday when an MQM lawmaker submitted a petition in the Supreme Court, calling for the Sharif brothers and their family members to be declared ineligible to contest the next general elections. The petition filed in the SC’s Karachi registry by MQM National Assembly member Advocate Iqbal Qadri calls for a probe into alleged irregularities in the Sharif family’s assets both in and outside Pakistan. The application also asks the court to make public the details of decades-old bank loans that were written off, making both the State Bank of Pakistan (SBP) and the National Accountability Bureau parties in the case. The Lahore High Court is hearing petitions seeking quashment of three corruption references relating to the Hudaibya Paper Mills, Ittefaq Foundries and Raiwind assets – prepared by NAB against PML-N chief Nawaz Sharif and his family members. According to NAB, the Sharif family is a defaulter of Rs3.8 billion http://dawn.com/news/755282/sharif-family-defaulted-on-rs3-8bn-loan in one of the three corruption references against it. MNA Iqbal Qadri’s petition also states that, during former Prime Minister Nawaz Sharif’s tenure, the establishment of military courts in Sindh and the extra-judicial killings of several Karachi citizens during his government should also be probed. The petition filed Saturday appears to be a tit-for-tat move by the MQM after the PML-N also filed a case in the SC earlier this week challenging the party command and control by MQM chief Altaf Hussain http://dawn.com/news/760842/pml-n-challenges-altafs-credentials on grounds that he was a foreign national and forbidden under the law to become a member of the parliament. The timing of both petitions is significant as general elections in Pakistan are just around the corner. REFERENCE: MQM files petition calling for Sharifs’ disqualification 2012-11-03 15:18:15 http://beta.dawn.com/news/761277/mqm-files-petition-calling-for-sharifs-disqualification 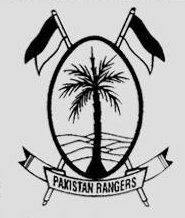 During the hearing, Chief Justice (CJ) Iftikhar Chaudhry demanded to know how the citizens could be protected when the forces could not protect themselves. Summoned by the court, DG Sindh Rangers Rizwan Akhtar blamed the unrest on armed wings of political parties, which he said were on a killing spree. He said it was necessary to eliminate these for peace in the city. Akhtar told the court that the Rangers had limited powers. They could arrest criminals, but not investigate the crimes properly. He added that those arrested were soon bailed out of prison. “In the past ten months, 28 Rangers personnel have been killed and 55 seriously injured in clashes,” he said. REFERENCE: Karachi unrest: SC summons reports from Rangers, AG 2013-08-28 17:43:49 http://dawn.com/news/1038927/karachi-unrest-sc-summons-reports-from-rangers-ag

1. (S) Summary: The police in Karachi are only one of several armed groups in the city, and they are probably not the most numerous or best equipped. Many neighborhoods are considered by the police to be no-go zones in which even the intelligence services have a difficult time operating. Very few of the groups are traditional criminal gangs. Most are associated with a political party, a social movement, or terrorist activity, and their presence in the volatile ethnic mix of the world,s fourth largest city creates enormous political and governance challenges.

2. (S) The MQM is an ethnic political party of the Urdu speaking community (known as “Mohajirs,” which is Arabic for immigrants) that migrated from India at the time of partition; Mohajirs make up around fifty percent of the total population in Karachi. MQM is middle-class, avowedly secular, and anti-extremist (the only party to publicly protest the recent Swat Nizam-e-Adl regulations). It has a long history of clashes with the Pakistan People,s Party (PPP), which controls the Sindh province in which Karachi is located, and with the Awami National Party (ANP), which represents MQM,s rival ethnic Pashtuns.

3. (S) MQM's armed members, known as “Good Friends,” are the largest non-governmental armed element in the city. The police estimate MQM has ten thousand active armed members and as many as twenty-five thousand armed fighters in reserve. This is compared to the city's thirty-three thousand police officers. The party operates through its 100 Sector Commanders, who take their orders directly from the party leader, Altaf Hussain, who lives in exile in the United Kingdom. The Sector Commanders plan and monitor the activities of the armed elements. MQM's detractors claim these armed men are involved in extortion, assassination of political rivals, shootings at campaign rallies, and the murder of people from other ethnic communities.