Recently I got the opportunity to attend Khudi’s annual Festival of Ideas in Lahore. Khudi is a progressive youth organization working for countering extremist mindset and for raising awareness about democracy. I had been following this organization on social media over the past few years and I grew to admire the remarkable work they are doing. Khudi works on various themes ranging from peace building, rights of minorities, gender issues and civic and political education. This time I applied for the annual Festival of Ideas and was luckily selected among limited number of delegates from across the country. I occasioned a remarkable hospitality upon my arrival and the organizers cordially welcomed the participants. In the matter of few minutes I started feeling like a part of the event wholeheartedly. The developments of the first day of the three-day event clearly indicated that I was among a very well organized community and a team of devoted folks who were working continuously for the better service and management of every activity. 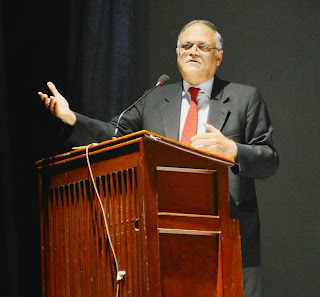 The orientation session started with a lecture of a leading intellectual and public figure Mr Javed Jabbar, who delivered a beautifully crafted lecture on the idea of Pakistan and the issues that we are confronting in the contemporary age. Mr Jabbar spoke in detail about our identity crisis and ways to face the challenges posed by it. By the end of this interactive lecture followed by very interesting questions & answers session, I had realized that the event is not going to betray any of the high ideals and anticipation which it portrayed; a 10 out of 10 from my side. After that we had a brilliant Mushaira, a session of poetry, featuring young zealous poets expressing their inner feelings through their splendid verses on romantic themes. As the Mushaira moved forward and veteran poets took the stage, I was fascinated to see that the notion of romanticism of the young poets was replaced by grave issues of life, suffering, death and the existential quests. Reference: Khudi Festival of Ideas: Learning for a Way Forward by M. Fahad Ur Rehman Nov - 13 - 2013 http://www.laaltain.com/khudi-festival-of-ideas-learning-for-a-way-forward/ 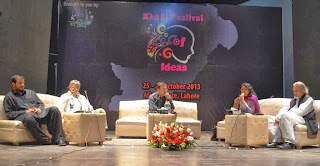 Former Khyber Pakhtunkhwa minister Mian Ifthikhar Hussain of the Awami National Party (ANP) delivered the keynote speech on counter-militancy and Talibanisation. He discussed the government’s policy of dialogue with the Taliban. About the Pakistan Tehreek-i-Insaf (PTI) contribution, he said, “[PTI chief Imran] Khan so far has not taken a step for the dialogue. His party’s government has approached none of the 53 factions of the Taliban.” “If ordinary people can point out where the Taliban are hiding, how can the government be unaware of where to find them?” he questioned. He said the narrative on militancy and extremism needed to changed. “If it doesn’t, the sacrifices of 850 ANP workers will go in vain,” he said. Speaking at a panel discussion, Haider Farooqi Maududi said, “The exploitation of religion for political purposes has made Pakistan hell.” He said “Pakistan had not emerged from a religious conflict but a political one.” He called for separation of religion from state matters. Other speakers in the panel Tanveer Jahan, Tahir Wadood Malik and Sulaiman Mandran agreed with him. At a panel discussion titled Democratic Transition: Hopes and Fears Tahir Mehdi, Fahd Husain and Taimur Rehman said democracy is not only a form of governance but also a way of life. “To bring true democratic change, a democratic culture has to be established at all levels, including in our homes and workplaces,” the speakers said. REFERENCE: Youth forum: ‘Democracy, too, is a way of life’ October 27, 2013 http://tribune.com.pk/story/622977/youth-forum-democracy-too-is-a-way-of-life/ 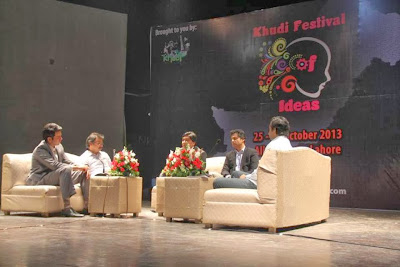 In another panel discussion, Haider Farooq Maududi, the son of founder of Jamaat-e-Islami Maulana Abu al Ala Moududi said, “The misuse of religion has made Pakistan a hell”. He said “Pakistan was not result of a religious conflict but that of a political one.” He also explained why there was a need to separate religion from state matters. The other speakers including Tanveer Jahan, Tahir Wadood Malik and Sulaiman Mandran agreed. Earlier, a panel discussion titled ‘democratic transition: hopes and fears’, which consisted of Tahir Mehdi, Fahd Husain and Dr Taimur Rehman stressed that democracy was not only a form of governance but it’s a code and a way of life. “To bring a true democratic change, the democratic culture has to be established at all levels including homes and workplaces,” they were of the view. Towards the end the audience was divided into four committees to discuss various regional and international conflicts that Pakistan faces. The committees discussed in detail civil-military, Pak-India, and Pak-US relations, along with issue of militancy. Reference: Youngsters share ideas at festival October 27, 2013 ARSHAD BHATTI http://www.nation.com.pk/lahore/27-Oct-2013/youngsters-share-ideas-at-festival 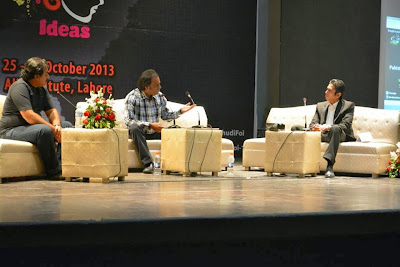 Journalist and discussion moderator Mubasher Bukhari said the Pakistani press faced great pressure to censor facts from stories that challenged the established narrative. “In all my years as a journalist, I have been under pressure to censor reports, whether from political or religious parties or the establishment,” he said. Journalists often practised self-censorship, he said. This particularly applied to blasphemy cases, which often went unreported. “With such practices in place there is no space left for counter narratives,” he said. And self-censorship was not just restricted to the press, he said. “Forget media reports, even governments exercise self-censorship by not releasing reports on sensitive issues in their entirety,” he said. Lawyer Yasser Latif Hamdani advocated a separation of the state and religion. “If we want to see Pakistan as a progressive state, we have to separate state from religion,” he said. Islam’s privileged status in the Constitution meant that it was always at the centre of public discourse. Even viewed in the legal paradigm, he said, one had little room to exercise religious and individual freedoms. In a society bent on establishing a single religious practice, there was no tolerance for alternative discourse, he said. Distorted history textbooks further strengthened the resolve not to tolerate differing views, he added. History books were not written to establish facts and context, he said, but to establish people’s roles as either ‘good’ or ‘bad’. “Why must we have a history that identifies characters as heroes or villains?” Research analyst Amir Mughal said Pakistani society was content to avoid issues by pretending they don’t exist. “Every topic deemed sensitive or controversial is brushed under the carpet by our government,” he said. Society’s natural response had been programmed such that anything varying from the established norms and narratives was either banned or censored. He questioned the ban on YouTube. But the media was not blameless, he said. “The media is quick to criticise civilian governments, but what about the security establishment?” he asked. The media also played a part in the assassination of Salmaan Taseer. “Nowadays, the easiest thing for anyone to do is to label liberals or secular people as traitors,” he said. REFERENCE: Censorship in public discourse: ‘Dogma has bred denial, killed dissent’ Published: October 28, 2013 http://tribune.com.pk/story/623371/censorship-in-public-discourse-dogma-has-bred-denial-killed-dissent/ 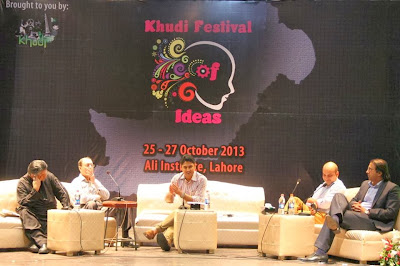 “We are looking at a modern world through a pre-modern lens,” said lawyer and columnist Saroop Ijaz, speaking at the third session – titled ‘Pakistan on the global stage: hopes and fears’ on the last day of the Khudi Festival of Ideas. Ijaz said when seen in a global perspective, it seemed that “Pakistani history” taught people to be xenophobic. He stressed the need for alternative narratives, but acknowledged that these would make people uncomfortable. “When what you have believed for so many years is challenged, there is bound to be a certain degree of discomfort,” he said. This was the reason that there were such contrasting views on Malala Yousafzai within the country, he said. “Malala’s narrative makes us uncomfortable because it does not conform to what we have in mind as the role of a 15-year-old girl in Pakistan,” he said. Ijaz also called for greater discourse between those termed conservatives and those called liberals in Pakistan. “At some stage, liberals and seculars will need to come out of their comfort zone and engage with conservative ideologies, which are far more popular than their own,” he added. Former Radio Pakistan director general Murtaza Solangi said Pakistan’s current woes were in large part due to the deficiencies of the education system, which discouraged critical thinking. “We are not standing at a sensitive juncture in history, we are in fact in an existential crisis,” he said. The focus on parliamentarians’ fake degrees, he said, was misplaced. “I find this not to be the issue. The real issue is the presence of [people getting] genuine degrees without any knowledge,” he said. Solangi said that the country’s political institutions had performed better in the last few years. “Confusion is the first step to wisdom. That is when you start seeking and that is when single narratives are challenged,” said Dr Daanish Mustafa, who teaches at the geography department at King’s College, London. He called for greater investment in various disciplines, particularly the performing arts, so as to encourage cultural diversity and create alternative narratives. These alternative narratives needed to be taken to a broader audience in order to challenge the old narrative. Dr Mustafa said he was hopeful that the country would move forward. “All is not lost. I don’t see suicidal tendencies in the young. They are hopeful,” he said. Writer and activist Dr Mubarak Haider said Pakistan could either change itself, or the world would change it. The latter, he said, seemed more probable. “The Muslim Ummah and specifically the Pakistani nation is narcissistic, and the more you try to tell them that the more they deny it,” he said. Dr Haider said the country had no global partner. “Even countries like Saudi Arabia do not completely stand by us. We are isolated as a nation on a global platform,” he said. Because of insecurities about religion, Pakistan seemed always to be preoccupied with trying to defend the faith. The country’s supreme governing body, he said, was not parliament but the Council of Islamic Ideology. He said: “Why are we so frightened that something may happen to our religion? Why do we feel so threatened?” REFERENCE: Pakistan on global stage: ‘We’re taught to be xenophobic’ By Aroosa Shaukat Published: October 28, 2013 http://tribune.com.pk/story/623369/pakistan-on-global-stage-were-taught-to-be-xenophobic/ 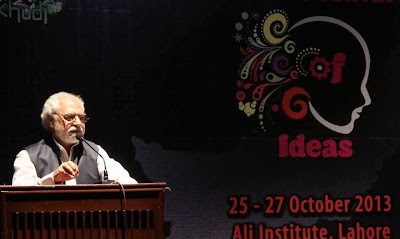 The current state of the country is not the fault of ‘maulvis’, but of a “secular class” of political and military leaders, said writer and politician Ayaz Amir in his concluding address at the Second Khudi Festival of Ideas on Sunday. “[The maulvis] have never been so powerful that they could bring the country to this state,” Amir said. From the dismal state of education to social unrest, the “secular class” was largely to blame, he said, addressing a gathering of some 300 young people from across the country who participated in the festival. Amir, who was a member of the ruling Pakistan Muslim League-Nawaz before throwing his support behind the Pakistan Tehreek-i-Insaf ahead of the May general elections, lamented the quality of leadership in the country since the death of Muhammad Ali Jinnah. “One after the other, we have been getting worse and worse leaders and that has been Pakistan’s ill fate,” he said. The current prime minister, he said, looked like “a nervous young student” at his recent press briefing alongside US President Barrack Obama at the White House. “Why is our leadership so insecure? Why do they lack the confidence to speak in front of the world?” Amir said unless the nation got the right leadership, it would get nowhere. “Those in a command position can either lead the nation in the right direction or lead it to its destruction. Unfortunately, we lack the leaders to steer it in the right direction,” he said. REFERENCE: Khudi Festival of Ideas: ‘Secular class to blame for our fate, not maulvis’ By Our Correspondent Published: October 28, 2013 http://tribune.com.pk/story/623373/khudi-festival-of-ideas-secular-class-to-blame-for-our-fate-not-maulvis/
Posted by Aamir Mughal at 3:44 AM