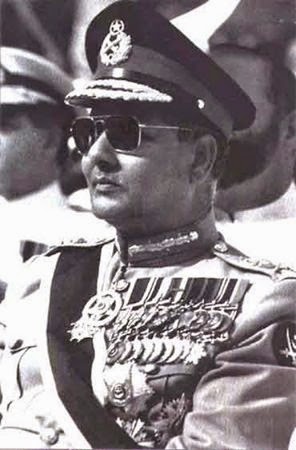 Chesterton had said, “I would hate to see a man in uniform make a speech, more so, if it is a good speech.” ‘Sir Walter Scott had said, “However disciplined and valiant a soldier he never be trusted.” H G Wells had said, “A professional military mind is by necessity an inferior and unimaginative mind; and no man with talents willingly imprison his gifts in such a calling.” Bertrand Russell had said, “All Generals are narcissistic and they have no sense of history.” Bernard Shaw said, “Soldiering is the art of the coward of hitting mercilessly when strong and getting out of the harms when weak.” Tolstoy had said, “The greatest Generals I have met were all stupid and absentminded men”. Napoleon had said, “The more vicious the man the better the soldier.” He again said, “I had picked up my Marshals from the mud and gutter”. Johnson had said, Soldiers and priests have been the corrupter of the earth.” On 21 September 2014 former Army Chief of Pakistan, General ® Mirza Aslam Aslam Beg while giving an interview to a Private TV Channel in Pakistan opined that behind these Protests of Dr Tahirul Qadri and Imran Khan , there is an International Conspiracy and involved USA, UK, Canada, Vatican, and last but not the least Iran without bothering about the history of his own statements which he issued in the past. 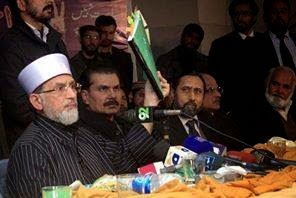 Not in a very distant past the same Mirza Aslam Beg convened a meeting at the residence of Qazi Hussain Ahmed (Former JI Ameer) and met with noted JI Leaders, PTI Leaders and even PML-N leaders as well as noted Journalists and Retired Generals and last but not the least Roedad Khan (who recently joined the Fascist Brigade of Imran Khan) to discuss the Misrule of PPP and how to get rid PPP govt by writing a letter to former Army Chief Kayani and that is not the end , this group was hell bent to create a situation to make judiciary pass an order to army to enforce its writ via using article 190 of the constitution and establishing a caretaker setup for a limited period (no such thing exist in the Law and Constitution of the Land). I wonder what the key journalist was thinking when he interviewed the General? Because the same anchor and journalist used an example for the General in 2011 which I cannot even mention here, the whole interview was one big sick joke with the nation and TV Channel made a circus of itself by pulling a stunt like this. Pakistan since decades has been facing severe surge in Sectarian Killing and rapidly vanishing space for diversity and pluralism yet General Aslam Beg has the audacity (and Anchor didn’t even contest him) to mainstream the Extremist Takfiri mindset by saying that “people are maligning those who follow correct interpretation of Islam by labeling them as Takfiris”. General should have read ISPR Press Conferences on Zarbe Azb and news as how these Takfiris in KPK and FATA played havoc with Pakistan. Pakistan’s relations with Iran due to our alleged strategic depths of using Sectarian Mullahs, are at the lowest ebb and General involved Iran behind Dr Tahirul Qadri and Imran Khan without any giving cogent evidence whereas in the past the same General was the biggest supporter of Iran , so much so that he advised Iran to attack Israel if Iran is Attacked. General Beg had conveniently forgotten what he himself wrote on Iran by praising the took over by Mullahs as Islamic Revolution and now Mr Beg is trying to define “Correct beliefs of Islam”, please do note that General Mirza Aslam Beg and General Hamid Gul have been part of a Rabidly Sectarian outfit Difa-e-Pakistan Council and even participated in their rallies despite the presence of most wanted terrorists in those rallies. 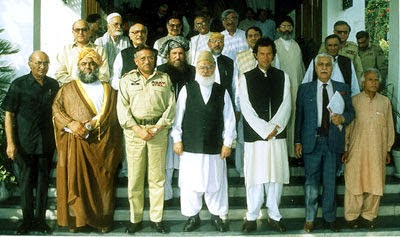 Since 1979 thousands of people died in Pakistan due to Afghan Fiasco and particularly after 911 Pakistan gave sacrifice of 50,000 lives due to War on Terror and its consequences and one of the reason of this loss is the alleged Strategic Depths of General Mirza Aslam Beg but he has the audacity to condemn Secular Class of Pakistan by involving them in the same International Conspiracy which is his very own brain child. Recently and even during the peak of Movement against General Pervez Musharraf, he always suggested that Musharraf be provided a safe exit and also opined that any Trial against Musharraf would be detrimental and army won’t allow it and even when the several Upright Ex-Military Officers support the trial against Musharraf , Beg always takes a quick and silent exit from any such commitment but he time and again blame Musharraf for the several disaster in Pakistan since 1999 and one of the issue is of Dr A Q Khan and Nuclear Proliferation and what tragedy we have that he is blaming and involving Iran in a conspiracy against Pakistan whereas he and Dr A Q Khan were blamed for passing out Nuclear Technology to Iran (check the references in the end). More ironic is when he blames MMA (Alliance of Religious Parties and allies of Mushharaf from 2002 to 2007 ) that this was created by General Pervez Musharraf and Mr Beg Conveniently meet with the same MMA Leaders like Qazi Hussain Ahmed, Senator Khursheed Ahmed . I wont be quoting on Mehran Bank Scandal because enough has been written on it and matter is Subjudice but would say that a man like General Mirza Aslam Beg could have been better for Pakistan , had he restricted himself to his professional duties in 1988 and wrapped up the mess created by General Zia (whose son blames General Mirza Aslam Beg for his father’s death) but General added fuel to the fire by sabotaging the democracy in Pakistan by using MQM against PPP in Sindh and by involving Institutions like ISI in Domestic Politics and that too in a worse possible way that it has become a topic of newspapers/media all over the world because when you suggest to a sitting Prime Minister that you need permission to smuggle drugs to support covert operation then what else you expect other than condemnation and Infamy. General Beg often claims that he was one of those officers who were trained by the US CIA to defeat communism! If that was the training then I must say that Langley should review their Training Manual.

General Zia: His Winged Death And The Aftermath by Sayid Ghulam Mustafa Shah

THE OTHER COLUMN: I Beg to differ —by Ejaz Haider http://archives.dailytimes.com.pk/editorial/26-Sep-2004/the-other-column-i-beg-to-differ-ejaz-haider

THE OTHER COLUMN: Succeeding at failure —by Ejaz Haider http://archives.dailytimes.com.pk/editorial/02-Jan-2005/the-other-column-succeeding-at-failure-ejaz-haider

South Asia : Pakistan lays down the agenda for the US By Seema Sirohi Dec 25, 2004 http://www.atimes.com/atimes/South_Asia/FL25Df01.html

'We have tapes of Azim Tariq and Imran Farooq from the MQM meeting an Army commander in Hyderabad before the incident, showing there was total connivance. We know too that the curfew was broken with the aid of local commanders and army trucks were used to transport snipers' - authors interview with Tariq Rahim about the Pucca Qila massacre - Waiting for Allah : Another Pakistan http://takhalus.blogspot.com/2012/03/waiting-for-allah-another-pakistan.html