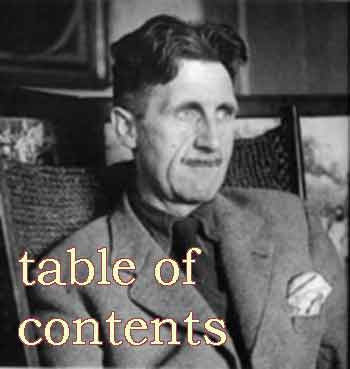 Nineteen Eighty-Four (sometimes abbreviated to 1984) is a classic dystopian novel by English author George Orwell. Published in 1949, it is set in the eponymous year and focuses on a repressive, totalitarian regime. Orwell elaborates on how a massive Oligarchial Collectivist society such as the one decribed in Nineteen Eighty-Four would be able to repress any long lived dissent. The story follows the life of one seemingly insignificant man, Winston Smith, a civil servant assigned the task of perpetuating the regime's propaganda by falsifying records and political literature. Smith grows disillusioned with his meager existence and so begins a rebellion against the system that leads to his arrest and torture. The novel has become famous for its portrayal of pervasive government surveillance and control, and government's increasing encroachment on the rights of the individual. Since its publication, many of its terms and concepts, such as "Big Brother", "doublethink", and "Newspeak" have entered the popular vernacular. The word "Orwellian" itself has come to refer to anything reminiscent of the book's fictional regime. Read George Orwell's 1984 free online! Click on any of the links on the right menubar to browse through 1984. [Courtesy: http://www.george-orwell.org/1984] [Courtesy: http://en.wikipedia.org/wiki/Nineteen_Eighty-Four]

Punishment for indecent SMS and emails By Syed Irfan Raza Monday, 13 Jul, 2009 07:06 AM PST http://www.dawn.com/wps/wcm/connect/dawn-content-library/dawn/the-newspaper/front-page/punishment-for-indecent-sms-and-emails-379
ISLAMABAD, July 12: The government announced on Sunday that sending indecent, provocative and ill-motivated stories and text messages through e-mails and mobile telephone Short Messaging Service (SMS) was an offence under the Cyber Crime Act (CCA) and its violators could be sent behind bars for 14 years. An official announcement by the interior ministry said that the government was launching a campaign against circulation of what it called ill-motivated and concocted stories through emails and text messages against civilian leadership and security forces.

The announcement does not elaborate what is meant by ill-motivated e-messages, but it is believed that the ‘civilian leadership’ meant President Asif Ali Zardari, Prime Minister Yusuf Raza Gilani, Interior Minister Rehman Malik and other politicians. A senior official of the ministry said: “Sending indecent message is a crime under the Cyber Crime Act and liable to punishment.” He said that some elements had been trying to malign the political leadership and security forces engaged in a military operation in Malakand and some areas in Fata. The government has tasked the Federal Investigation Agency’s Cyber Crime Cell to block or trace such emails and mobile telephones’ SMS.

Under the Cyber Crime Act, violators could be jailed for 14 years, besides confiscation of their property. Similarly, any Pakistani living abroad and violating provisions of the act may be charged and will be liable to deportation to Pakistan. Under the campaign, all Internet Service Providers would be checked physically by the FIA on a daily basis. The directive said the campaign would also target proscribed organisations which had been using internet for malicious propaganda against security forces. The Director General of FIA, Mr Tariq Khosa, has been instructed to monitor and check stories and messages and take necessary action under the CCA.

An FIA official said that strict action would be taken against all culprits in the next few days and the agency had already done a lot of work in this regard. “Interpol/Lyon has also been requested to identify those email addresses and websites registered abroad which are being used for such stories,” the official said.
Posted by Aamir Mughal at 3:00 PM