Yesterday Kamran Khan lied through his teeth by saying that Dr. Shahid Masood’s words against Sindhi Culture were Unintentional. When something goes ON AIR you [GEO TV] better own it that these were the Real Intentions of GEO TV. 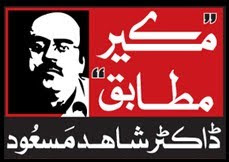 Lets assume that these words [Insulting Comment on Sindhi Cap] were unintentional then how would you define the article columns on similar Hateful Lines appeared in the parent organization of the GEO TV i.e. Daily Jang and The News International which were written by Dr Shahid Masood [in Urdu and English both REFERENCE: GEO TV/JANG GROUP: Sindhi Cap, National Dress & General Musharraf http://chagataikhan.blogspot.com/2009/12/geo-tvjang-group-sindhi-cap-national.html] and Irfan Siddiqui in Jang [Irfan is a former Columnist of weekly Magazine Takbeer]. If words slipped out of mouth unintentionally then how come words came out of pen unintentionally, where were the editors, sub editors, and proof readers of Daily Jang and The News International. REFERENCE: GEO TV/JANG GROUP's Message of Hate for Pakistan. http://chagataikhan.blogspot.com/2009/11/geo-tvjang-groups-message-of-hate-for.html]. World Sindhi Congress, SANA and Sindh Democratic Front should raise this issue with PPP-ANP AND MQM legislators for raising it in Sindh and National Assemblies to move a resolution against Jang Group [involved in inciting ethnic clashes in the past as well]. WSC, SANA and SDF should write letters to Reporters without Borders http://www.rsf.org/ [RSF] and CPJ http://www.cpj.org/ AND Human Rights Watch to keep the check on such Irresponsible Journalism by the Jang Group of Newspapers. Kamran Khan intentionally forget to mention that this “Fire Against Sindhi Culture” is basically ignited by THE GROUP EDITOR, SHAHEEN SEHBAI of The News International – Jang Group of Newspapers. REFERENCE: Shaheen Sehbai, Jang Group & Sindh Card of Zardari. http://chagataikhan.blogspot.com/2009/11/shaheen-sehbai-jang-group-sindh-card-of.html
Posted by Aamir Mughal at 10:53 AM