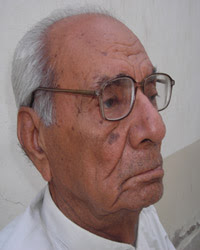 Sobho Gianchandani is a prominent Sindhi revolutionary who remains a source of inspiration for many generations of activists, writers and social reformers. Mr. Gianchandani, known lovingly as Comrade Sobho, has been associated with many political parties and campaign groups, including the Indian National Congress and Khudai Khidmatgar and is the founder of many progressive, democratic and nationalist campaigns in Sindh. After the partition, Pakistani authorities pressured him – like millions of other Sindhi Hindus -- to leave Sindh and migrate to India, but Sobho refused, and in consequence he was forbidden to travel abroad until 1998. Sobho was imprisoned for more than a year during the British rule, and after the partition, he fell under the wrath of Pakistani establishment and has many jail sentences to his credit, including one in 1971 for opposing military sponsored genocide in Bangladesh. Comrade Sobho and Mr. G. M. Syed were close associates and comrades in different aspects of the Sindhi rights movement. The G. M. Syed Memorial Lifetime Achievement Award is bestowed on Mr. Gianchandani in appreciation of his life-long struggle for emancipation for Sindhis and other oppressed peoples of South Asia and in recognition of his grass-roots efforts to promote tolerance, justice and peace. REFERENCE: G M Syed Memorial Committee September 22, 2005 http://www.sindhudesh.com/gmsyed/awards/gmsyedawardann2005.pdf
Face To Face
"I've never doubted that Pakistan would overlook my contribution"
Comrade Sobho Gianchandani
SANA Convention Karachi Sindh Comrade Sobho Gianchandani

URL: http://www.youtube.com/watch?v=nSz2YoUXGmM
Courtesy: Mr. Mazhar Lakkho
THE Academy of Letters, Islamabad, while expanding the area of its literary awards for the year 2004, this time chose the noted Sindhi writer Sobho Gianchandani for its lifetime achievement (Kamal-i-fan) award. In a press release, the academy praised Sobho for his contribution to Sindhi literature and culture and for the intellectual guidance he has provided to the younger generation. Sobho’s life long sacrifices in the cause of landless agricultural labour and the marginalized sections of society were also mentioned. Those who welcomed the academy’s decision included both Urdu and Sindhi language writers — Prof Saher Ansari, Dr Mazharul Haq Siddiqi (vice-chancellor, Sindh University), Agha Salim, Qamar Shahbaz, Prof Ayaz Gul, Taj Baloch and Shamsherul Haidery. Karachi’s Fiction Group, an important literary body, struck a sour note, saying the Academy literary award should have gone to a literary person. It is perhaps unaware of the services Sobho Gianchandani has rendered to the enrichment of Sindhi language, literature and culture. REFERENCE: Pushto poet honoured August 24, 2005 Wednesday Rajab 18, 1426 http://www.dawn.com/2005/08/24/fea.htm

A best article about Mr.Sobho Gianchandani & Congratulation to Mr. Sobho on his birth day long live.