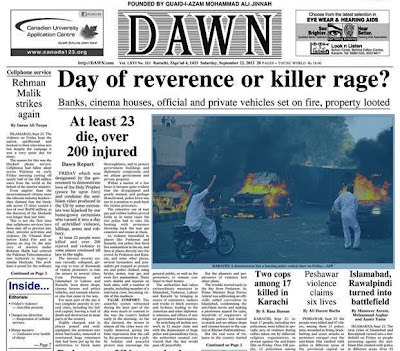 The Lord says in Holy Quran: O ye who believe! When the call is heard for the prayer of the day of congregation, haste unto remembrance of Allah and leave your trading. That is better for you if ye did but know. And when the prayer is ended, then disperse in the land and seek of Allah's bounty, and remember Allah much, that ye may be successful. (Surah Al Jummah - Chapter 62 The Friday Verse 9 and 10) - Friday 21 September 2012 Friday which was designated by the government to demonstrate love of the Holy Prophet (peace be upon him) and condemn the anti-Islam video produced in the US by some extremists was hijacked by our home-grown extremists who turned it into a day of unbridled violence, killings, arson and robbery. At least 23 people were killed and over 200 injured and violence in some places continued till late in the night. The internal security system virtually collapsed, giving way to tens of thousands of violent protesters to rule the streets in several cities, from Peshawar and Islamabad to Lahore and Karachi, burn down shops, cinema houses and police vehicles, and ransack whatever else that came in the way. For most part of the day it was complete anarchy in several cities, including the federal capital, leaving a trail of death and destruction in large parts of the country. Highly charged, and in places armed and well-equipped, the protesters tore down barricades, removed or overturned huge containers that had been put up by the authorities to block main thoroughfares, and to protect government buildings and diplomatic compounds, and set ablaze government and private property. Within a matter of a few hours it became quite evident that the ill-equipped and poorly trained, and perhaps ill-motivated, police force was not in a position to push back the violent protesters. The extensive use of tear gas and rubber bullets proved futile as in many cases the riot police had to take the beating with protesters throwing back the tear gas canisters and stones at them. As violence intensified in places like Peshawar and Karachi, riot police first fired live ammunition in the air, and then at places directly into the crowd. In Peshawar and Karachi, and some other places, several bystanders and journalists got trapped as protesters and police clashed, using bricks, stones, tear gas and even live ammunition. There were deaths and injuries on both sides, with a number of people, including member of a television crew, becoming victim of this madness.

Saudi Arabia is also an Islamic country and more Islamic than Innovative and Polytheist Islamic Country like Pakistan. Suadi Grand Mufti says this, 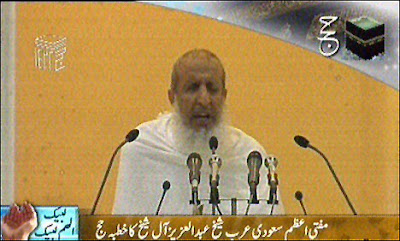 RIYADH: The Kingdom’s Grand Mufti, Sheikh Abdul Aziz Al-Asheikh, yesterday denounced attacks on diplomats and embassies as un-Islamic after deadly protests against a US-made anti-Islam film swept the Middle East. At the same time, he called on the international community to take steps to criminalize any act of abusing great prophets and messengers such as Abraham, Moses, Jesus and Muhammad (peace be upon them). In a statement issued yesterday, Al-Asheikh also appealed to world Muslims to react to any attempt to denigrate Prophet Muhammad (pbuh) by strictly adhering to the values advocated by the Prophet (pbuh) instead of unleashing violence against innocent people, the SPA reported. “Condemnation of the attempts to abuse the Prophet (pbuh) should be within the Law of Allah and Sunnah of the Prophet. The Muslims should not shed the blood of innocent people, or vandalize properties or of public institutions,” the Grand Mufti said. The mufti said the hatred of Islam through such movies would not harm the great personality of the Prophet (pbuh) or any aspect of Islam but would only backfire on the people who spread venomous ideas. "Such animosity only helps in spreading the glory of the Prophet (pbuh) with greater vigor,” he said. The mufti also warned that the enemies of the Prophet (pbuh) and Muslims achieve their goals when Muslims resort to violence. “Muslim rage is playing into the hands of their enemies when Muslims attack innocent people and set fire to public or private institutions. Such acts, in fact, damage the image of Islam, a situation the enemies of Islam seeks to create. Such acts go against the teachings of the Prophet (pbuh) and are deplorable,” the mufti said, while reminding the faithful that all Muslims are willing to sacrifice their lives and properties for the cause of their dear Prophet (pbuh). “The goal of those who abuse Islam and Muslims is to divert the energy of Muslims from building their nations and efforts for unity and development,” the mufti warned. Foreign Minister Prince Saud Al-Faisal yesterday reiterated the Kingdom’s strong disapproval of the film and also stressed the principles of interfaith dialogue in a telephone talk with the US Secretary of State Hillary Clinton. The prince condemned the attack on the US diplomatic missions. Meanwhile, the Taleban claimed responsibility for an attack on a base that killed two American Marines, saying it was a response to the film. Hundreds of Muslims took to the streets of Sydney, some throwing rocks and bottles in clashes with police. Police stormed into Cairo’s Tahrir Square and rounded up hundreds of people early yesterday after four days of clashes and demands from protesters for the US ambassador’s expulsion. Libyan authorities said they had identified 50 people who were involved in the attack in which Ambassador Christopher Stevens died. REFERENCE: Grand Mufti denounces violence against embassies ARAB NEWS Sunday 16 September 2012 http://www.arabnews.com/saudi-arabia/grand-mufti-denounces-violence-against-embassies
Posted by Aamir Mughal at 5:07 AM