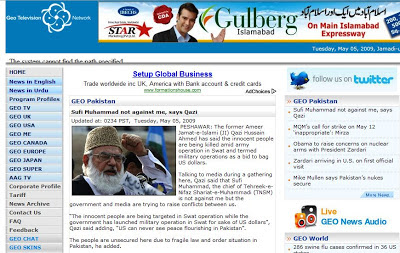 GEO TV May 05, 2009: Sufi Muhammad not against me, says Qazi PESHAWAR: The former Ameer Jamat-e-Islami (JI) Qazi Hussain Ahmed has said the innocent people are being killed amid army operation in Swat and termed military operations as a bid to bag US dollars. Talking to media during a gathering here, Qazi said that Sufi Muhammad, the chief of Tehreek-e-Nifaz Shariat-e-Muhammadi (TNSM) is not against me but the government and media are trying to raise conflicts between us. “The innocent people are being targeted in Swat operation while the government has launched military operation in Swat for sake of US dollars”, Qazi said adding, “US can never see peace flourishing in Pakistan”. The people are unsecured here due to fragile law and order situation in Pakistan, he added. REFERENCE: Sufi Muhammad not against me, says Qazi Updated at: 0234 PST, Tuesday, May 05, 2009 http://www.geo.tv/5-5-2009/41342.htm

Whereas in the same year Qazi Hussain Ahmed was of the view:) 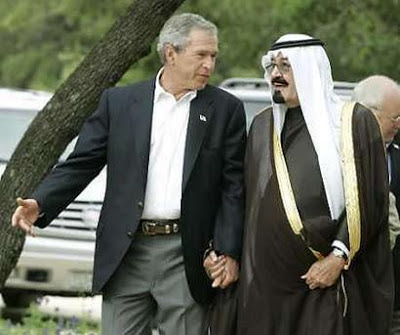 Jihad not mandatory in Kashmir: Sufi News Desk Sunday, May 03, 2009 RAWALPINDI: Chief of Tehrik Nifaz Shariat-e-Muhammadi Maulana Sufi Muhammad has said that democracy is ‘Kufar’ (infidelity) and backing democratic forces is useless. “Even I do not offer prayer under pro-democracy people,” he said in an exclusive interview with Salim Safi, to be telecast on Geo TV at 10:05pm today (Sunday). The TNSM chief said Qazi Hussain Ahmad and Maulana Fazlur Rehman were searching for Shariah in democracy. He said women were not allowed to go out of their homes except for Haj, adding there was no need for a wife’s permission in Jihad (holy war). He was of the opinion that there was no Islamic Shariah system in Saudi Arabia and Iran. He said as the Kashmiris were not demanding Shariah, but a state, therefore, Jihad was not mandatory there. “Today there is no place in the world where ‘Jihad Bil Qataal’ (holy war) is taking place,” he said, adding that Shariah has prohibited stopping vices through the use of force. REFERENCE: Jihad not mandatory in Kashmir: Sufi News Desk Sunday, May 03, 2009 http://www.thenews.com.pk/TodaysPrintDetail.aspx?ID=21884&Cat=13&dt=4%2F30%2F2009
Posted by Aamir Mughal at 1:51 AM