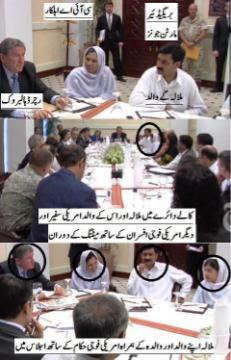 ISLAMABAD, June 5 Chief Justice Iftikhar Mohammad Chaudhry met visiting US envoy Richard Holbrooke in the Supreme Court building on Friday. “The meeting was held at the request of the visiting US envoy Mr Holbrooke who came to meet the chief justice in his chambers,” said Dr Faqir Hussain, Registrar of the Supreme Court. He said that officials of the Foreign Office were present at the meeting. “Matters relating to judicial reforms as per national judicial policy and the whole judicial structure of Pakistan were discussed,” Dr Hussain said. The meeting comes at a time when Pakistani judiciary is seized with litigations that directly involved interests of the United States. A particular case of concern to the US is that of the missing persons in which intelligence agencies have been accused of either abducting people on suspicion of terrorism or handing them over to the United States. The case of Dr Aafia Siddiqui, who was reportedly abducted from Pakistan and is now in US detention, is also pending in courts. The Supreme Court spokesman denied that the issue of missing persons came up in the meeting. When contacted, the firebrand leader of lawyers` movement and president of the Supreme Court Bar Association, Ali Ahmed Kurd, declined to comment on the meeting. PML-N spokesman Siddiquul Farooq who has a case pending in the apex court said “It was a courtesy call by Mr Holbrooke and we believe in the person of Chief Justice Iftikhar Mohammad Chaudhry and we believe that no one can derail him from the judicious path.” Immediately after the meeting, the chief justice went to the presidency to attend the oath-taking ceremony of newly appointed Federal Shariat Court Chief Justice Agha Mohammad Rafique. There he had a one-to-one meeting with President Asif Zardari. It was for the first time since his restoration that the chief justice visited the presidency and met President Zardari. Justice Iftikhar, it may be mentioned, did not accept earlier invitations from President Zardari. The last time the chief justice met Mr Zardari was at the Zardari House just before he moved to the presidency after becoming president. After becoming president, Mr Zardari publicly resisted the restoration of Justice Iftikhar Chaudhry, till the success of the long march by lawyers in March this year. One case pending before the Supreme Court and that directly affects President Zardari relates to the controversial National Reconciliation Ordinance (NRO) through which former President General Pervez Musharraf allowed the quashing of corruption charges against PPP leaders, including President Zardari. Under the new judicial policy reforms spearheaded by the chief justice, judges of the superior court are required to strictly follow the judicial code of conduct which, among other things, require them to stay away from public functions and not to assume executive offices to temporarily fill vacancies created by the president and governors going abroad. After his first restoration on July 20, 2007, Justice Chaudhry had stopped meeting the president or the prime minister and attending functions hosted by them. REFERENCE: CJ receives Holbrooke, calls on Zardari By Matiullah Jan http://archives.dawn.com/archives/41794 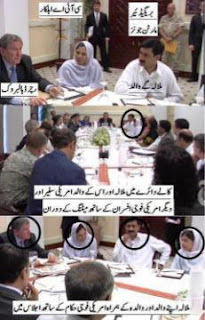 2005: Durrani meets US senator Bureau Report July 16, 2005 PESHAWAR, July 15: NWFP Chief Minister Akram Khan Durrani, who is visiting USA, met US Senator Mr Bidden in Washington on Tuesday. He also met senior policy advisor on South Asia Jonah Blank and Senator Sanatorium at Capital Hill. Earlier, Mr Durrani met Principal Deputy Assistant Secretary of Defence Peter Floury at Pentagon where he visited various sections. During his meetings with US authorities, Mr Durrani explained policies of the MMA government, said an official handout. Apart from his meetings, Mr Durrani attended several functions at various places. It may be recalled here that Dr Zia Mahmud of Global Engagement Centre of USA had, on behalf of his organisation, invited Mr Durrani to USA. Addressing members of Brooking Institution, he said that a government of the people was in place in the NWFP. He said that common man had easy access to MMA government and minorities and women were being given special care. REFERENCE: Durrani meets US senator Bureau Report July 16, 2005 Saturday Jumadi-us-Sani 8, 1426 http://archives.dawn.com/2005/07/16/nat38.htm