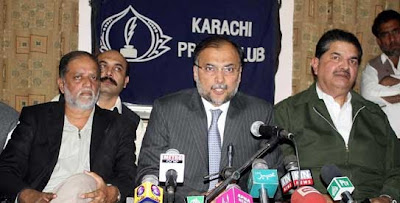 2011 PML-N hints at legal action against MQM - KARACHI: The PML-N is considering legal action against the MQM parliamentarians involved in “bad-mouthing and using un-parliamentary language” against the PML-N leadership. Ahsan Iqbal, the information secretary of the PML-N, was critical of those political parties which, in spite of being part of the coalition government, were criticising it day in and day out. The PML-N and the Muttahida indulged in a mud-slinging bout on Wednesday, slandering each other’s top leadership. “If they are really sincere, they should leave the government and do politics based on principles,” Mr Iqbal said at a press conference on Saturday. He blamed the government and its coalition partners for the worsening law and order situation. Mr Iqbal also slammed the government for the massive increase in petroleum prices, calling for a reversal of the decision. He called for removal of ‘corrupt’ officials from financial institutions, saying that new appointments should be made through a parliamentary committee. He said the economy was on its knees because of corruption. The PML-N leader said unless the government stopped wastefulness, economy would not pick up, warning that poverty would spawn anarchy and civil war.He said had President Asif Zardari acted upon the advice of Mian Nawaz Sharif, the country would not have been in dire straits. He reiterated his party’s stance that it would not be a part of the “puppet show for a mere change of face”. “My party thinks that any change should be meaningful and decisive.” REFERENCE: PML-N hints at legal action against MQM 2011-01-01 23:40:30 http://beta.dawn.com/news/595522/pml-n-hints-at-legal-action-against-mqm-2

Nawaz Sharif on MQM in London APC 2007 (ARY... by SalimJanMazari 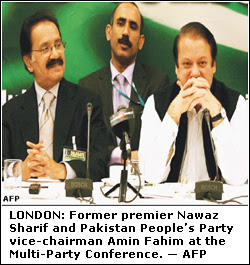 13) The APC holds General Musharraf, the Sindh governor and the provincial government, and the MQM responsible for the carnage carried out in Karachi on May 12, 2007, and demands an independent judicial enquiry by a judge of the Supreme Court to ascertain and identify the persons involved. 14) The APC condemns recent acts of terrorism in UK. It further resolves to write a joint memorandum to the UK government for initiating necessary legal proceedings against MQM chief Altaf Hussain for his alleged role in incidents of terrorism in Pakistan. REFERENCES : Text of London APC declaration Monday, July 09, 2007 http://archives.dailytimes.com.pk/national/09-Jul-2007/text-of-london-apc-declaration UK action against Altaf demanded by Rauf Klasra Monday, July 09, 2007 http://www.thenews.com.pk/TodaysPrintDetail.aspx?ID=8912&Cat=13&dt=7/9/2007 APC agrees to resist Musharraf’s re-election by Rauf Klasra Monday, July 09, 2007 http://www.thenews.com.pk/TodaysPrintDetail.aspx?ID=8911&Cat=13&dt=7/9/2007

* Rizvi refers to Nisar as ‘Mr Bean’ --- * MQM leaders accuse Sharifs of having ‘weird likes’ --- * Nisar accuses Altaf of undergoing treatment for mysterious ‘manly disease’ --- ISLAMABAD/LAHORE: The war of words between the Pakistan Muslim League-Nawaz (PML-N) and the Muttahida Qaumi Movement (MQM) on Wednesday intensified after leaders of both parties started making personal attacks on each others’ leaders, a private TV channel reported. Sitting on different talk shows on private TV channels and talking to reporters outside the Parliament House, leaders of both the parties did not even refrain from using abusive language and profanities against each other, besides hurling threats of serious consequences. PML-N leader Chaudhry Nisar said that the MQM was a party of “dacoits”, adding that a person who was sitting abroad for the past 19 years could not bring a revolution in Pakistan. He said if MQM chief Altaf Hussain was sincere with Pakistan, he should return to the country. Separately, commenting on Nisar’s comments, MQM’s Haider Abbas Rizvi said the PML-N was the first to make personal attacks on the MQM leadership. He also referred to Nisar as “Mr Bean”. He said the PML-N leaders would not find a place to stand in the country if a “Pandora’s box was opened”. He said the PML-N leaders used to meet with generals in the dark of night, adding that the PML-N chief was General Jilani’s production, General Zia’s follower and was grateful to General Pervez Musharraf. MQM’s Waseem Akhtar said Nisar was bald and had put on a wig, while Nawaz and Shahbaz both got hair transplants during their forced stay in England. He said it seemed they wanted to have “some romantic affairs”. He said the PML-N leadership had done nothing for the people of Lahore, adding that the people would beat them with shoes. The MQM leaders accused the Sharifs of having “weird likes”, as at a women’s convention, Nawaz had compared himself to Shahjahan and his wife to Mumtaz Mahal. They even went to the extent of saying that Nawaz’s daughter had left the house to force the family to get her married to her father’s ADC. They threatened that both the Sharifs would not be allowed to come to Karachi in future unless they apologised for the indecent language against their party chief. Earlier, Chaudhry Nisar, while talking to reporters outside the Parliament House, had accused Altaf Hussain of undergoing treatment for a mysterious “manly disease” in London, and said if the MQM did not stop using indecent language against the Sharifs, his party would make public the records of that rehab centre. Nisar even asked Altaf to apologise to the nation for all his political, financial and moral ills. He asked how the Sharif brothers had made property worth millions and become owners of 25 factories. He further asked which medical treatment Shahbaz received from London, adding that sex stimulants were recovered from Nawaz’s secretariat when Musharraf took over. daily times monitor/ staff report REFERENCE: PML-N, MQM tear each other apart Thursday, December 30, 2010 http://archives.dailytimes.com.pk/main/30-Dec-2010/pml-n-mqm-tear-each-other-apart 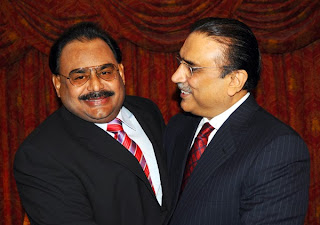 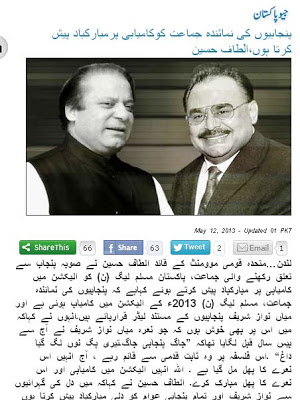