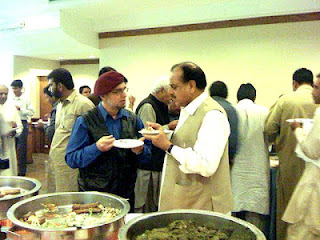 BBC: The rise of Pakistan's televangelists By Mobeen Azhar BBC World Service, Karachi 14 July 2012 Farhat Hashmi has been accused of embezzling funds from her television show and fleeing to Canada to avoid prosecution, although she denies any wrongdoing. And Mehar Bukhari, known for her political interviews, sparked outrage by declaring the politician she was speaking to was a heretic. But the best-known of all the TV evangelists is Dr Amir Liaqat. From a glossy television studio above a parade of run-down shops in Karachi, he had an audience of millions for Alim aur Alam, a live one-hour show that went out five days a week across Pakistan. The programme allowed Dr Liaqat to play the role of a religious "Agony Uncle", remedying the religious dilemmas of his audience. In September 2008, Liaqat dedicated an entire episode to exploring the beliefs of the Ahmedis, a Muslim sect which has been declared as "un-Islamic" by much of the orthodoxy. In it, two scholars said that anyone who associated with false prophets was "worthy of murder". Dr Khalid Yusaf, an Ahmedi Muslim, watched the programme with his family, and says he was shocked that a mainstream channel would broadcast this kind of material. "They talked about murder as a religious duty. A duty for 'good' Muslims." Within 24 hours of the broadcast, a prominent member of the Ahmedi community was shot dead in the small town of Mirpur Kass. Twenty-four hours later Khalid Yusaf's father, another Ahmedi community leader, was killed by two masked gunmen. Liaqat has distanced himself from the shootings. "I have no regrets because it has nothing to do with me," he says. "I'm hurt by what happened and I'm sorry for the families but it has nothing to do with me or anything that was said on my programme." REFERENCE: The rise of Pakistan's televangelists By Mobeen Azhar BBC World Service, Karachi 14 July 2012 Last updated at 00:22 GMT http://www.bbc.co.uk/news/magazine-18729683

Use and Abuse of the Blasphemy Laws http://www.scribd.com/doc/130592503/Use-and-Abuse-of-the-Blasphemy-Laws


Use and Abuse of the Blasphemy Laws by Aamir Mughal


UNHCR Report on Minorities in Pakistan 2012 by Aamir Mughal

While condemning Zaid Hamid for almost everything under the sun, the GEO TV, Jang Group and The News completely and very conveniently forgot that the same Zaid Hamid had lectured Pakistan on Islam and Allama Iqbal by appearing in one the branches of Jang Group i.e. AAG TV  http://en.wikipedia.org/wiki/AAG_TV 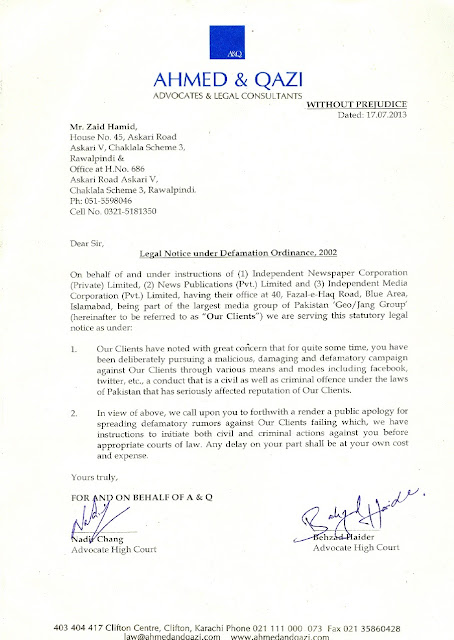 ISLAMABAD: A self-proclaimed security expert and propagandist Zaid Hamid was receiving Rs600,000 per month from the ISI and was hatching conspiracies not only against the democratic system but also against the army and judiciary. This was revealed by one Emmad Khalid, who worked closely with Zaid Hamid for many years and also received money from the ISI on behalf of Zaid Hamid. The statement of Emmad Khalid was aired in ‘Capital Talk’, hosted by Hamid Mir on Geo News on Monday night. Zaid Hamid is spreading his extremist ideology in the name of Islam and patriotism, but this is the first time that someone from his own ranks revolted and disclosed that this enemy of democracy was being patronized by some elements within ISI. Hamid Mir started his show by saying that Geo offered Zaid Hamid to give his point of view, but he sent message “I am not interested”. Hamid Mir played some video statements of Zaid Hamid in which he was openly saying that Pakistan and democracy cannot exist together. In one of his speeches just before the recent elections, Zaid Hamid said that “We must stop this election; we must not allow this election because this election will break Pakistan”. REFERENCE: Zaid Hamid is liar, blasphemer, say Mufti Qadri, Mufti Naeem Monitoring Desk Tuesday, July 23, 2013 http://www.thenews.com.pk/Todays-News-2-191739-Zaid-Hamid-is-liar-blasphemer-say-Mufti-Qadri-Mufti-Naeem 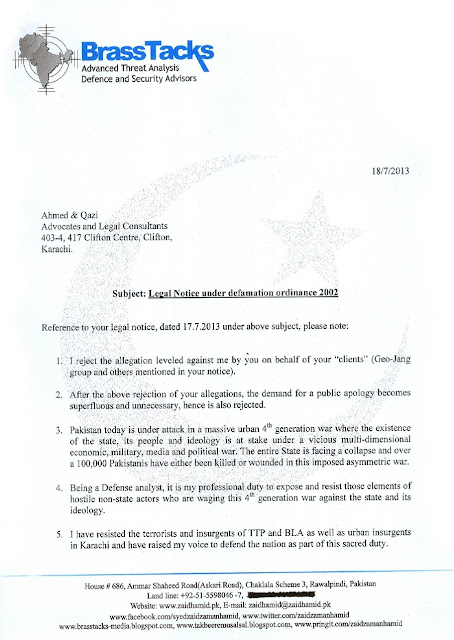 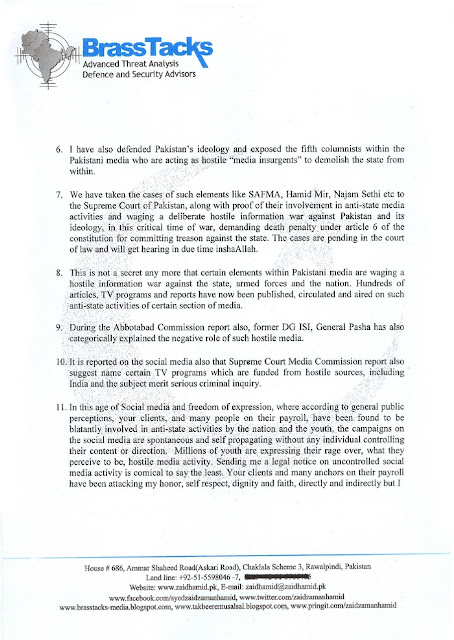 He further said that Army and judiciary should throw out democracy because all the political parties are a threat to Pakistan. Zaid Hamid, particularly, declared the PPP, ANP and MQM as enemies of Pakistan and said that he wanted to establish Khilafat in Pakistan. He claimed that many Army officers are in his contact. Hamid Mir mentioned that the MQM was a close ally of Musharraf, but Zaid Hamid never spoke against Musharraf because he was getting money from ISI when Musharraf was in power. Hamid Mir also said that Pakistan was created by the struggle of a political party and Zaid Hamid had no right to say that all political parties were dirty. Lawyer and columnist Babar Sattar condemned the statements made by Zaid Hamid and said that his anti-democracy views and incitement to violence is violation of many articles of the Constitution. He demanded that Zaid Hamid should be tried under treason charges. Journalist Salim Safi said that former head of the ISI Lt Gen Ahmad Shuja Pasha made serious allegations on media in front of Abbottabad Commission, but he must explain why ISI was giving money to people like Zaid Hamid, who are pushing Pakistan towards a civil war. Salim Safi demanded that judiciary and government must take action against all those who are declaring some journalists and media groups as traitors. He said that someone could kill me if I have been declared a traitor by someone who is a champion of patriotism. Religious scholar Tahir Ashrafi discussed the complicated religious side of Zaid Hamid. He said that Zaid Hamid was a follower of Yousaf Kazzab, who was once convicted under blasphemy charges. He also cited a book written by Yousaf Kazzab in which he mentioned Zaid Hamid as his companion. Ashrafi said that he has proofs that Zaid Hamid called Yousaf Kazzab (God forbid) Abu Bakar Siddique. He said that after Tousaf Kazzab saga this man disappeared and then again appeared as Zaid Hamid instead of his previous name Zaid Zaman. He claimed that he invited Zaid Hamid many times for a debate on his beliefs, but every time Zaid Hamid never turned up. REFERENCE: Zaid Hamid is liar, blasphemer, say Mufti Qadri, Mufti Naeem Monitoring Desk Tuesday, July 23, 2013 http://www.thenews.com.pk/Todays-News-2-191739-Zaid-Hamid-is-liar-blasphemer-say-Mufti-Qadri-Mufti-Naeem 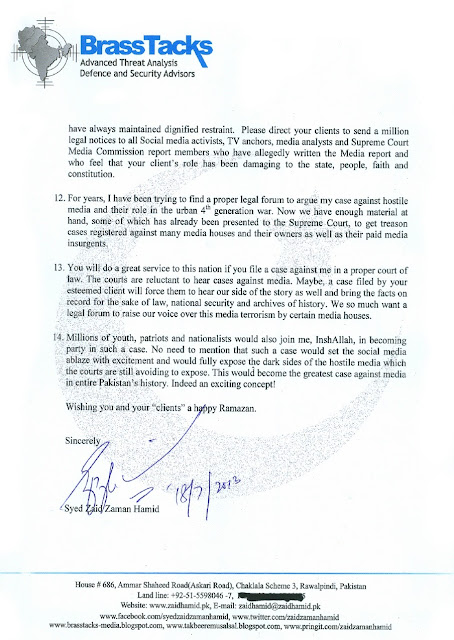 The views of Mufti Ghulam Sarwar Qadri and Mufti Muhammad Naeem about Zaid Hamid were also aired. Both declared him a liar and Gustakhe Rasool (blasphemer). Hamid Mir also discussed some allegations of Zaid Hamid against Geo TV and Jang Group. He showed the media commission report to his viewers and said that there is nothing against Geo TV in the recommendations of media commission, but Zaid Hamid is trying to twist the report according to his own agenda and saying on different TV channels that Geo is working for US and India. Hamid Mir informed viewers that Geo and Jang served a legal notice to Zaid Hamid and demanded a public apology from him; otherwise, further legal action will be taken against him. Hamid Mir also rejected the claims of Zaid Hamid that it was Geo which disclosed that Ajmal Kasab was a Pakistani. Hamid Mir showed some old clips of Geo TV after the Mumbai attacks and said that Geo tried its best to respond to the Indian propaganda against Pakistan. He claimed that citizenship of Ajmal Kasab was first disclosed by a British newspaper, and then Pakistani media followed. He said it may be a possibility that Ajmal Kasab was hired by some anti-Pakistan elements and they used him against his own country. At this stage, Tahir Ashrafi said that may be Zaid Hamid is also a new kind of Ajmal Kasab hired by some enemies and using him to spread hatred against democracy, judiciary, Army and media. During the show, a lot of viewers demanded through SMS messages that the govt must take action against the anti-democracy activities of Zaid Hamid and expose all those elements that were providing him money from national exchequer. REFERENCE: Zaid Hamid is liar, blasphemer, say Mufti Qadri, Mufti Naeem Monitoring Desk Tuesday, July 23, 2013 http://www.thenews.com.pk/Todays-News-2-191739-Zaid-Hamid-is-liar-blasphemer-say-Mufti-Qadri-Mufti-Naeem


Risky Journalism in Pakistan (Live With Talat... by SalimJanMazari The credibility of the media is at stake here: The controversy surrounding television anchor and columnist Hamid Mir refuses to go away, and for good reason. Many questions remain unanswered. A purported telephone conversation between him and an unknown militant has shocked the country and the journalistic community in particular. If the person on the line is indeed Mr Mir, an explanation is in order about his possible ties with militant organisations. He must also answer allegations that the information he ostensibly provided may have contributed to the killing of Khalid Khawaja, a former ISI official belonging to the air force who had been abducted by the Taliban. Mr Khawaja, believed by many to be a Taliban sympathiser, is repeatedly described as a CIA agent by the man who sounds uncannily like Hamid Mir. Mr Khawaja and his wife are also held responsible in part for the bloodbath at Islamabad`s Lal Masjid. The person on the phone also spews venom of the vilest kind on the Ahmadi community. Slain Taliban leaders are referred to as martyrs. Mr Mir denies most of the conversation and has served legal notice on the paper that broke the story. He claims that he and the organisation that employs him are being victimised for their consistent criticism of the PPP government and President Zardari in particular. Hamid Mir, who is not short of detractors even within the media, also maintains that the audio `recording` is the work of the Intelligence Bureau which took a voice sample and then produced an entire conversation with the help of a “special gadget.” Mr Mir has every right to proclaim his innocence but that alone will not suffice. In this digital age it is child`s play for independent experts to confirm whether or not the voice on the tape is Mr Mir`s. It is just as simple to distinguish a doctored recording from an unedited conversation. The credibility of the media is at stake here. What is needed is an investigation that is carried out with an open mind and whose outcome is accepted and acted upon by all parties. This is imperative if allegations of unethical conduct by the media and charges of dirty tricks by the government are to be laid to rest. REFERENCE: Hamid Mir saga Dawn Editorial May 20th, 2010 http://archives.dawn.com/archives/30111
Posted by Aamir Mughal at 9:24 AM