The rabab is the national instrument of Afghanistan used in ancient court music, as well as modern day art and entertainment music. It has three main strings and a number of sympathetic strings over a hollow neck and a goat-skin resonator. It has a very deep body making it a bit awkward to hold. Rababs come in different sizes depending on the region they are found. The Afghan rabab is also found in northern India and Pakistan, probably due to the Afghan rule in those regions in the 18th Century. The rabab was the precursor to the Indian sarod, which is regarded as one of India's most important instruments. Country: Afghanistan, Pakistan, Kashmir Region: Central and South Asia Type: rebab Collection: Randy Raine-Reusch - Courtesy http://www.asza.com/afganreb.shtml 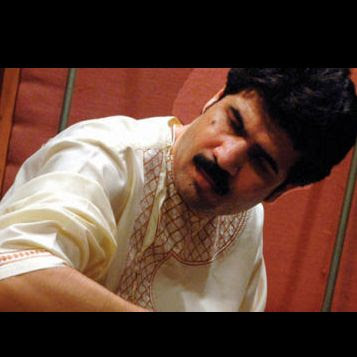 Homayun’s artistry demonstrates how an imaginative musician working within a traditional musical idiom can enrich and expand its expressive power.

Homayun Sakhi is the outstanding Afghan rubâb player of his generation, a brilliant virtuoso endowed with a charismatic musical presence and personality. During Afghanistan’s long years of armed conflict, when music was heavily controlled, censored, repressed, and, finally, totally banned, the classical rubâb style to which Homayun has devoted his career not only survived but reached new creative heights.

Homayun’s artistry demonstrates how an imaginative musician working within a traditional musical idiom can enrich and expand its expressive power while respecting the taste and sensibility passed down from master musicians of the past. Moreover, Homayun’s personal story illustrates the extraordinarily challenging conditions under which he and his fellow Afghan musicians have pursued their art.

The art music tradition of the Afghan rubâb featured on these recordings is very much a hybrid creation. Indeed, Afghan music represents a confluence of cultural influences whose sources lie to the east, north, and west of present-day Afghanistan, in the great historical empires of Persia, Central Asia, and India. Each region has contributed instruments, genres, and performance styles to Afghanistan’s diverse musical landscape. The rubâb itself is of Central Asian origin - one of a family of double-chambered lutes that includes, among others, the Iranian târ, Tibetan danyen, and Pamir rubâb. While rooted in the raga tradition of North India, the cultivated art music performed on the Afghan rubâb also has strong stylistic links to Iran. The tabla, the pair of drums that accompany the rubâb and express the music’s sophisticated rhythmic element, is indisputably Indian, but its creators seem to have drawn inspiration from older forms of Central and West Asian kettle and goblet drums. Finally, Homayun’s performance style has been shaped not only by the musical traditions to which Afghan music is geographically and historically linked, but by his lively interest in contemporary music from around the world.

Homayun Sakhi was born in Kabul in 1976 into one of Afghanistan’s leading musical families. From the age of ten, he studied rubâb with his father, Ghulam Sakhi, in the traditional form of apprenticeship known as ustâd-shâgird (Persian: “masterapprentice”).

Ghulam Sakhi was a disciple and, later, brother-in-law, of Ustâd Mohammad Omar (d. 1980), the much-revered heir to a musical lineage that began in the 1860s, when the ruler of Kabul, Amir Sher Ali Khan, brought a number of classically trained musicians from India to perform at his court. He gave them residences in a section of the old city adjacent to the royal palace so that they could be easily summoned to court when needed, and this area, known as Kucheh Kharabat, became the musicians’ quarter of Kabul. Over the next hundred years, Indian musicians thrived there, and Kabul became a provincial center for the performance of North Indian classical music. The royal patrons of this music were Afghans who were at ease with Persian culture as well as Indian and loved classical Persian poetry. To please their patrons, the Kharabat musicians created a distinctive form of vocal art that combined elements of Persian and Indian music. One of the principal Persian verse forms is the ghazal, constructed from a series of couplets that follow a
particular rhyme scheme. Ghazals provided the texts for the new style of Afghan vocal music, while the music itself was based on the melodic modes (raga) and metrical cycles (tala) of Indian music. The Kabuli style of ghazal singing later spread to other Afghan cities. Musicians in Kabul also cultivated the art of playing the rubâb, which was prominent in regional folk music. Today the rubâb is regarded with great pride by the people of Afghanistan as their national instrument.

Homayun’s study of the rubâb was interrupted in 1992, when his entire family moved to the Pakistani city of Peshawar, a place of refuge for many Afghans from the political chaos and violence that enveloped their country in the years following the Soviet invasion of 1979. In Peshawar, Homayun quickly became a popular entertainer. “I played a mixture of ragas and songs,” Homayun recalled, “and I earned a good income from music. I played on television and on the radio. Peshawar has a lot of popular singers, and I often played with these singers.”

The unofficial headquarters of Afghanistan’s émigré music community in Peshawar was Khalil House, a modern apartment building where between thirty and forty bands established offices. The building’s apartments - each one essentially a single large room - became the headquarters of a group of musicians to which potential clients came to arrange for the musicians’ participation in wedding parties and other musical events. For several years, Khalil House was a hotbed of musical activity for Afghan musicians in exile. Some musicians ran their own music schools, and informal jam sessions where young musicians competed to show off their virtuosity and technical skills were common.

Long hours and a spirit of camaraderie in Khalil House enabled the musicians from Kabul to maintain and further develop key musical skills.

Homayun rented a room in Khalil House and opened a small music school. “The people of Peshawar - the way they play the rubâb is different,” Homayun explained. “I introduced a Kabul style to them. For example, traditionally, rubâb players didn’t touch the instrument’s sympathetic strings, but I used them a lot, in addition to the melody strings. Before, players just picked down with the plectrum, but I picked both up and down. I thought these things up. I listened to violin music from different places, and to guitar and sitar music, and symphonic music. I listened to a lot of different things that I found on cassettes, and I wondered, why couldn’t I play with these kinds of techniques on the rubâb? And I started to try them. I understood that the rubâb isn’t just an instrument for backing up a singer. I worked hard and played for long hours every day to create more of a style - a complex picking style that uses rhythmic syncopation and playing off the beat.”

After the fall of the Taliban in 2001, many Afghan musicians in Peshawar returned to Kabul, but by this time, Homayun was on his way to Fremont, California. He brought with him the sophisticated and original rubâb style that he had developed during his years in Pakistan, but little else. Fremont, a city of some 200,000 that lies southeast of San Francisco, claims the largest concentration of Afghans in the United States. Afghans flocked to Fremont and nearby Hayward and Union City in the 1980s, joining an older community of émigrés from the Asian subcontinent. In Fremont, just as in Peshawar, Homayun quickly established himself as a leader of the local musical community. He opened a school to teach Afghan music to children, recorded compact discs of popular Afghan songs, and became a sought-after performer, appearing together with Toryalai Hashimi, a tabla player and well-known exponent of Afghan music who had also grown up in Kabul. But while continuing his community activities, Homayun devotes as much as eight hours a day to practicing the rubâb. His exceptional talent and unswerving dedication to his art have brought him success on the concert stage, and he maintains an active performance schedule that takes him to cities around the world. Yet Homayun never appears satisfied with his own performances. He rejected the honorific title of ustâd (master) that his fellow Afghan musicians proposed to confer on him, claiming that his abilities represented “only a drop in the vast sea of music and musical knowledge.” Asked to comment on his own music-making, Homayun says, “I am grateful to God for helping me through every step of my life, and to Him I owe whatever success I’ve achieved in performing on my instrument and developing the art of rubâb.” COURTESY: Homayun Sakhi: The art of the Afghan Rubâb http://www.akdn.org/aktc_music_homayun.asp
Posted by Aamir Mughal at 6:06 AM