US threatens airstrikes in Pakistan by Christina Lamb 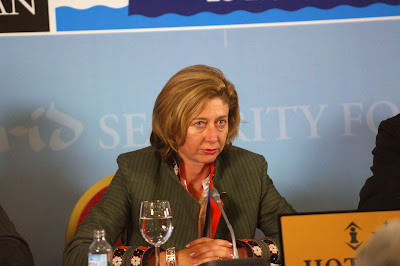 Christina Lamb is a British journalist who is currently Foreign Correspondent for The Sunday Times. Profile - http://www.christinalamb.net/pages/aboutme.html
US threatens airstrikes in Pakistan From The Sunday Times September 27, 2009

The United States is threatening to launch airstrikes on Mullah Omar and the Taliban leadership in the Pakistani city of Quetta as frustration mounts about the ease with which they find sanctuary across the border from Afghanistan.

The threat comes amid growing divisions in Washington about whether to deal with the deteriorating situation in Afghanistan by sending more troops or by reducing them and targeting the terrorists.

This weekend the US military was expected to send a request to Robert Gates, the defence secretary, for more troops, as urged by General Stanley McChrystal, the US commander there.

In a leaked strategic assessment of the war, McChrystal warned that he needed extra reinforcements within a year to avert the risk of failure. Although no figure was given, he is believed to be seeking up to 40,000 troops to add to the 68,000 who will be in Afghanistan by the end of this year.

However, with President Barack Obama under pressure from fellow Democrats not to intensify the war, the administration has let it be known that it is rethinking strategy. Vice-President Joe Biden has suggested reducing the number of troops in Afghanistan and focusing on the Taliban and AlQaeda in Pakistan.

Last week McChrystal denied any rift with the administration, saying “a policy debate is warranted”.

According to The New York Times, he flew from Kabul to Ramstein airbase in Germany on Friday for a secret meeting with Admiral Mike Mullen, chairman of the Joint Chiefs of Staff, to discuss the request for more troops.

So sensitive is the subject that when Obama addressed the United Nations summit in New York, he barely mentioned Afghanistan. The unspoken problem is that if the priority is to destroy Al-Qaeda and reduce the global terrorist threat, western troops might be fighting on the wrong side of the border.

The Biden camp argues that attacks by unmanned drones on Pakistan’s tribal areas, where Al-Qaeda’s leaders are hiding, have been successful. Sending more troops to Afghanistan has only inflamed tensions. “Pakistan is the nuclear elephant in the room,” said a western diplomat.

It is a view echoed by Richard Barrett, head of the UN Commission on Monitoring Taliban and Al-Qaeda, who believes the presence of foreign troops has increased militant activity and made it easier for the Taliban to recruit.

“If Obama sends more troops it had better be clear what they are to do,” he said.

“A few thousand more boots on the ground may not make much difference except push the fight into areas which are currently quiet because no one is there to challenge the Taliban. I cannot see any number of troops eliminating the Taliban. Obama has a really difficult decision to make.”

The debate has been intensified by the debacle of the Afghan election, which has left many European leaders struggling to justify sending soldiers to support a government that has been fraudulently elected.

According to preliminary results, President Hamid Karzai won 54.6% of the vote, compared with 27.8% for Abdullah Abdullah, his main challenger. But there have been complaints that fraudulent ballots may account for up to 20% of the 5.5m votes cast.

The Electoral Complaints Commission, overseen by a UN watchdog, has begun to recount about 10% of the disputed votes. Final results are not expected for two weeks. If Karzai is left without the 50% needed for outright victory, there must be a second round unless he agrees to form a unity government.

In the meantime, the country is in limbo and the Taliban is taking advantage, opening up new fronts in the north and west.

Al-Qaeda is also trying to capitalise on the uncertainty. Osama Bin Laden issued a call to European nations to withdraw troops from Afghanistan, and threatened reprisals with an allusion to the bombings in Madrid and London. The recording, released on Friday, seemed to be directed at Germany in the run-up to parliamentary elections today.

The Afghan election has strengthened the position of those in Washington who advocate eliminating Taliban leaders in Pakistan.

Senior Pakistani officials in New York revealed that the US had asked to extend the drone attacks into Quetta and the province of Baluchistan.

“It wasn’t so much a threat as an understanding that if you don’t do anything, we’ll take matters into our own hands,” said one.

The problem is that while the government of President Asif Zardari is committed to wiping out terrorism, Pakistan’s powerful military does not entirely share this view.

Earlier this year there was optimism that Pakistan had turned a corner after it confronted a Taliban group that had taken over the Swat valley and moved to within 70 miles of Islamabad.

There has been tacit co-operation over the use of drones. Some are even stationed inside Pakistan, although publicly the government denounces their use.

Suspicions remain among US officials that parts of Pakistan’s military intelligence agency, the ISI, are supporting the Taliban and protecting Mullah Omar and other leaders in Quetta.

It was to shore up Zardari’s domestic standing that Obama attended a Friends of Pakistan summit in New York on Thursday. On the same day, the US Senate tripled non-military aid to Pakistan to $1.5 billion a year.

The Obama administration hopes such moves will reduce anti-American feeling in Pakistan. A survey last month by the Pew Research Centre found that almost two-thirds regarded the US as an enemy.

Drone attacks on Quetta would intensify this sentiment, causing some British officials to argue that such missions would be “unthinkable”.

The Pakistani government is reluctant to take its own action, however. “We need real-time intelligence,” said Rehman Malik, the interior minister. “The Americans have never told us any location.”

Western intelligence officers say Pakistan has been moving Taliban leaders to the volatile city of Karachi, where it would be impossible to strike. US officials have even discussed sending commandos to Quetta to capture or kill the Taliban chiefs before they are moved.