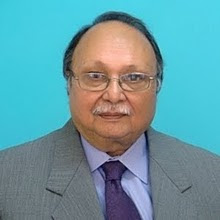 August 2012: Senior journalist Shamim-ur-Rahman passes away - He was like an Elder brother to me. A thorough gentleman. What a loss. He was Lovingly Called "Pappu". I met him during the second tenure of Mr. Nawaz Sharif in an State Function when Prince Philip of Great Britain on a Official Tour and I was on duty and out of no where Shamim Bhai approached me and asked "what is happening" I was amazed that a Senior Journalist would approach an Intelligence Officer and that too in a Public Function. I said to him, Sir, it wouldn't be advisable for any journalist to approach Spies and he laughingly replied "what's the harm in it" , you are doing your duty and I am mine and then he gave me his visiting card which is now a souvenir for me. We used to cover Sindh Assembly proceedings together from 1997 till the imposition of Governor Rule in Sindh and not even once he crossed his boundaries to appease me nor I crossed my boundaries to do him some favour (which is a norm in a Third World country i.e. links between Intelligence Agencies and Journalists for ulterior motives). I resigned from Intelligence Bureau in 2001 and he was bold and upright enough to honour me by inviting me in a function held in Karachi Press Club in memory of Late. Yasser Arafat (with whom Shamim Sahab was very close http://tribune.com.pk/story/424887/transitions-shamimur-rahman-journalist-who-once-interviewed-yasser-arafat-by-the-headlight-of-cars-passes-away-at-71/  . Another honour he bestowed upon a non entity like me, were his occasional posts for my humble blog.   (links are given below) Another interesting thing which I am still amazed at, was his signatures, once I was sitting with him he signed on some papers and his signatures were in a very artistic Urdu, I laughingly said, isn't it strange that you work in an English newspaper but your signatures are in Urdu. I don't know what happened to his book on Afghanistan on which he was working from early 2000. He was like an elder brother to me. May Allah Bless You Eternally Shamim Bhai - Rest in Peace.

Peace be on you, O’ inmates of graves. May Allah forgive us and you, you have preceded us, and we are following. {Tirmidhi}.
“Peace be on you, O’ abode of the believing people. What you have been promised with has come to you. You are tarried till tomorrow and certainly we shall reach you if Allah wills. O’ Allah, forgive the inmates of the Baqi ‘ il – Gharqad. {Muslim} 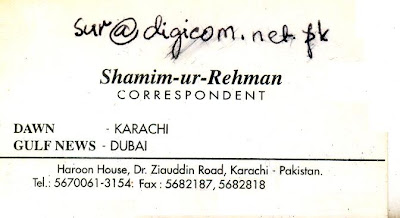 KARACHI, Aug 22: Shamim-ur-Rahman, a veteran journalist and special correspondent of Dawn, died on Tuesday morning after a long illness. He was 71. Shamim-ur-Rahman was laid to rest in a cantonment graveyard in Block 17 of Gulistan-i-Jauhar. The Namaz-i-Janaza was attended by a large number of journalists and politicians, including PPP Senators Raza Rabbani and Saeed Ghani, JI chief Syed Munawwar Hassan, adviser to the Sindh chief minister Rashid Rabbani and Special Assistant Syed Waqar Mehdi. Mr Shamim is survived by his wife, two daughters and a son. Mr Shamim was born in Patna, India, on July 4, 1941. His father Shah Anees-ur-Rehman, who was a graduate from the Calcutta University, had died in India in 1947. Mr Shamim did his graduation from Karachi’s S.M. College and masters in international relations from the University of Karachi. Syed Muzaffar Hussain Shah, a former chief minister of Sindh, and Javed Jabbar, a former federal minister, studied at the university at the same time. Mr Shamim started his career as journalist with the economic service of Pakistan Press Association. Before that he had also served for a short stint as a lecturer at Islamia College, Karachi. He also worked for Daily Sun, Karachi. But it was Pakistan Television where he was able to demonstrate his grasp over international affairs, covering the foreign office and later working as diplomatic correspondent. REFERENCE: Veteran journalist Shamim dies at 71 http://dawn.com/2012/08/23/veteran-journalist-shamim-dies-at-71/ 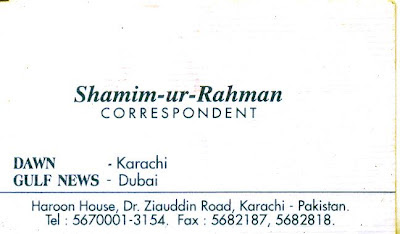 Among his notable assignments was the 1988 Geneva conference on Afghanistan. Shamim-ur-Rahman also reported on some high-profile trials like those of Asif Ali Zardari and Nawaz Sharif. Since he was a cricket lover, the PTV sometimes assigned him to international events. In that capacity he reported on some major contests, for example a triangular series between Pakistan, South Africa and West Indies in South Africa during the early 1990s. After quitting PTV he joined the AFP news agency as its bureau chief in Karachi. He also worked for the UAE’s Gulf News before switching over to Dawn as its special correspondent in 1993. Mr Shamim was with this newspaper till his death. President Asif Zardari, Prime Minister Raja Pervez Ashraf, Jamaat-i-Islami chief Munawwar Hassan, Tehrik-i-Insaaf head Imran Khan, a number of other political leaders, and Zaffar Abbas, the Editor of Dawn, condoled his death. G.M. Jamali, president of Karachi Union of Journalists, appealed to Shamim-ur-Rahman’s family and to the management of Daily Dawn to submit his stories to his organisation so that these could be published in book form. REFERENCE: Veteran journalist Shamim dies at 71 http://dawn.com/2012/08/23/veteran-journalist-shamim-dies-at-71/
Battlefield City - Part - 1 (PTV 30 Jan 2011)

I am highly thankful for the affection you have expressed towards my father, Shamim ur Rahman (late). He was indeed an asset for the people he worked with and doubtlessly for his family.Little do people know that he was an excellent father and a husband too.

His death is a loss that is irreparble for us and we are thankful to all his friends for their appreciation and love they have for my father.

Don't you remember me, I am Aamir Mughal Unlce who used to come to visit Shamim Bhai, ask Bhabi, Ayesha and Farrukh. This blog is nothing for the Great Human Being who left all of us. May Allah shower His Blessings eternally on Shamim Bhai in Jannatul Firdaus. May Allah help you and your family in this time of test and trial.

Yes I remember you well. I have answered many of your phone calls for abbu. how are you?

Its good to read to these words for him. I feel really honoured to be his daughter. And you are absolutely true about his signature. I have long been a fan of it so much that when the time came for me to have an official signautre I followed his suit to have a sign in urdu, not as artistic though but still.... like father like, daughter simply.

I am fine but very disturbed on losing a great man and mentor whose friendship was and honour for me. May Allah give Bhabi, You, Ayesha and Farrukh Courage to face this tragedy.