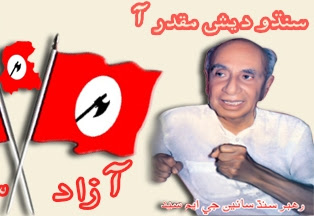 2009: Saturday, September 05, 2009: MQM was established to counter Sindhi nationalists: Beg - LAHORE: Former army chief Mirza Aslam Beg said on Friday the Muttahida Qaumi Movement (MQM) was established as a political measure to counter the Sindhi nationalist movement following the hanging of PPP founder Zulfikar Ali Bhutto. Talking to a private TV channel, Beg said the MQM did not exist before 1978 and was established on the directions of General Ziaul Haq, then military ruler, only to counter Sindhi nationalists who had lost Bhutto after Zia’s military coup. He said the caretaker government under Ghulam Ishaq Khan had decided to support the Islami Jamhoori Ittehad (IJI) to counter the PPP in order to balance the political atmosphere. “I think the formation of the IJI was a right decision at the time,” he said. Beg said the IJI were the only means that could create a strong opposition at the time. He said former president Pervez Musharraf had created and supported the Muttahida Majlis-e-Amal (MMA) and the PML-Q to prolong his term in office, but no one had pointed that out. Beg said he believed the Bahawalpur plane crash that killed Gen Ziaul Haq was “sabotage”. REFERENCE: MQM was established to counter Sindhi nationalists: Beg Daily Times Monitor Saturday, September 05, 2009 http://www.dailytimes.com.pk/default.asp?page=2009%5C09%5C05%5Cstory_5-9-2009_pg7_4 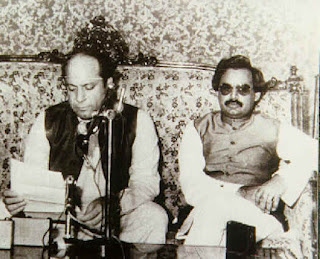 Nonetheless, after the PPP’s victory, the ISI never ceased trying to unseat Benazir Bhutto. In October 1989, at the instigation of Hamid Gul and in an operation named Midnight Jackals, the ISI tried to sway PPP members of the National Assembly to back a no-confidence vote against Bhutto and managed to convince the Mohajir Quami Movement (MQM; its name was changed later to Muttahida Quami Movement) to switch its support from the PPP to the opposition. The Mohajir Quami Movement (MQM) emerged on the Pakistani political scene in March 1984 from among the cadres of the former graduates of the University of Karachi known as the All Pakistan Mohajir Students’ Organization, which had been established in June 1978. Soon the new organization became a force to reckon with in Karachi, thanks to the availability of weapons owing to the Afghan war and the encouragement of the intelligence agencies, which were trying to curtail the influence of the PPP and Sindhi nationalists. Although it owed its political existence largely to the military and the generous support of the ISI, the MQM has also been the target of the agency at times. When it became troublesome in the urban centers of Sindh in the late 1980s, the ISI armed some of the Sindhi nationalist groups to fight the mohajirs and later managed to create a split within the MQM itself. In December 1991, three dissidents of the MQM—Afaq Ahmad, Aamir Khan, and Badar Iqbal—received the support of the ISI, then led by Lieutenant General Asad Durrani, the idea being that “the MQM could be brought to heel only by terrorizing the terrorists.” The now two MQM groups soon were at loggerheads. The split was followed soon thereafter by a direct confrontation between the Altaf faction and the army. In 1992, the army extended an operation initially aimed at dacoits (bands of armed robbers) in rural Sindh to cities known to be MQM strongholds. Subsequently the MQM was forced by the military and the ISI to withdraw from contesting the 1993 national elections. This marked the beginning of the degeneration of the organization. By 1994, the MQM was no more than a label for a number of gangs loosely hanging together. Violence constantly increased, claiming a thousand lives in 1994 alone. Peace was progressively brought back to Karachi by Interior Minister Nasrullah Babar in 1996. MQM continued to decline as a consequence. REFERENCES : ISI and the MQM: A Case Study - Reforming the Intelligence Agencies in Pakistan’s Transitional Democracy Frédéric Grare http://www.carnegieendowment.org/files/pakistan_intelligence_transitional_democracy.pdf 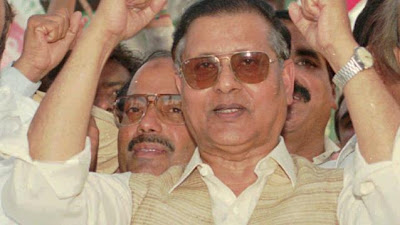 In 1990, Brig Saeed said, the MQM had quit the ruling coalition and PPP workers resorted to taking revenge from MQM for their political betrayal through the use of force. The MQM reacted even more violently through their armed political workers. PPP, MQM, PPI, JI and JSM activists were relentlessly killing each other. The daily death toll was 100-110. PSF, APMSO, IJT and JSQM had held activists of their rivals hostage and committed horrendous and inhuman atrocities on them like drilling holes in knee joints and burning their delicate parts with electric soldering machines. Brig Saeed said he had held meetings with late MQM leaders Tariq Azeem, Dr lmran Farooq and Saleem Shahzad, Prof Ghafoor of JI, Dr Hameeda Khuhro and Mumtaz Bhotto of JSF, Abdul Waheed Aresar of JSQM and Mukhtar Awan of PPI and gave them a strong message that if they did not stop killing, arson and looting, the army would be forced to step in to restore peace. Initially, the belligerent forces denied their involvement in the unlawful activities, but when irrefutable evidence of their crimes was produced, they took the warning more seriously. Within one week killings reduced drastically from 100-110 a day to 20-30, the statement said. REFERENCE: Asghar Khan case verdict: An interesting peek into minds of then military bosses http://dawn.com/2012/11/09/sc-verdict-in-the-asghar-khan-case-an-interesting-peek-into-minds-of-then-military-bosses/ 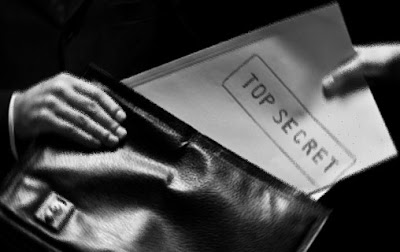 13 spymasters gather to stare at each other  ISLAMABAD, Oct 8 It was an unusual dinner hosted by Javed Noor, the chief of the Intelligence Bureau, at a “safe house” of the civilian spy agency that brought together 13 former spymasters of the country. Sources told Dawn News television channel that none of the former spymasters opened up as they were probably suspicious of each other. The dinner, in sector F-7 of the federal capital, was arranged at a time when cracks are visible in civil-military relationship over the Kerry-Lugar legislation, but one of the participants insisted that during the entire evening none of the participants discussed this issue. The sources said that all the spymasters sat on sofas in a relatively big hall. At first soup was served as an appetiser. No reason was given for this unusual gathering, but a source present at the dinner said the present Director-General of IB, Javed Noor, who is a grade 22 officer of the Police Service of Pakistan (PSP), arranged this dinner in the hope of setting a new tradition. No such get-together had happened in the IB`s 62-year-long history. The gathering brought together a number of important characters who have been privy to some of the defining moments in the nation`s turbulent past. Perhaps the most well-known among them was Brigadier (retired) Ejaz Shah, who is regarded as one of the closest friends of former president Pervez Musharraf. Many believe that he had played a vital role in bailing out Mr Musharraf in the recent past, especially in the face of calls for his trial under article six of the Constitution. Ejaz Shah`s presence at the meeting was significant for another reason — he was the man accused by the late Benazir Bhutto of hatching conspiracies against her. According to sources, Ejaz Shah spent most of his time with Col (retired) Iqbal Niazi. However, he also met Major Masud Sharif Khatak, another former IB chief who served under the second Benazir government. Mr Sharif is now being ignored by the Pakistan People`s Party simply because of criticising the party`s role during the pro-judiciary movement. When this correspondent approached Ejaz Shah, he refused to divulge any information about the dinner or his past role, saying he was bound by the official secrets act. The sources said that Masud Sharif shared a sofa with Maj-Gen (retired) Talat Munir, who served under the Musharraf government until Oct 2002 — when a civilian set-up was established after the general election. The man to succeed him was Col (retired) Bashir Wali, who was Mir Zafarullah Jamali`s nominee for the chief. The sources said Bashir Wali, who was replaced by Ejaz Shah, met all the participants, but avoided chatting up Ejaz Shah. Most of the time he was seen talking with his old friend, Col (retired) Iqbal Niazi, another ex-IB chief who had served under Nawaz Sharif. Dr Shoaib Suddle, the incumbent`s predecessor, also graced the occasion. Best known for honesty and uncompromising nature, Dr Suddle is currently serving as federal tax ombudsman. He used the opportunity by sharing memories with Chaudhry Manzoor, another spymaster who headed the intelligence bureau during the premiership of Nawaz Sharif. REFERENCE: 13 spymasters gather to stare at each other By Azaz Syed http://archives.dawn.com/archives/44377

IMTIAZ WAS THERE, TOO 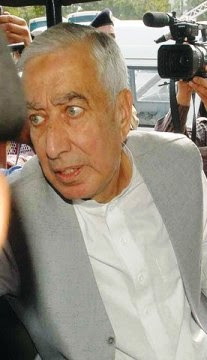 Brig (retired) Imtiaz Ahmed, aka Billa, who recently grabbed headlines by making revelations on television about the wheeling and deal during the 1990s, also attended the dinner. Imtiaz relived the past with Masud Sharif. Both of them refused to make any disclosure. Brig Imtiaz, who was IB chief during the first Nawaz Sharif government, sat beside Maj-Gen Rafiullah Niazi, the man who replaced Masud Sharif and put him behind bars. Rafiullah Niazi was probably the only individual present at the dinner who had two stints as chief of the intelligence agency _ once under Nawaz Sharif and later under Pervez Musharraf. The sources said an interesting moment came when Col (retired) Iqbal Niazi, who headed the IB when Gen Musharraf overthrew the Nawaz government on Oct 12, 1999, came across Rafiullah Niazi, who replaced the former on that fateful day. Gen (retired) Niazi is known for passing on a controversial intelligence report about the first US missile attacks in Balochistan to prime minister Nawaz Sharif and was removed later. He again took over after Mr Nawaz`s removal. Last but not least, a word about the menu. Chinese cuisine dominated the table. But rice, kebabs, chicken boti and kheer were also present to lend a local flavour. The dinner ended with the serving of green tea. Most of the invitees were seen lighting their favourite brands of cigarette. REFERENCE: 13 spymasters gather to stare at each other By Azaz Syed http://archives.dawn.com/archives/44377
Posted by Aamir Mughal at 4:41 AM