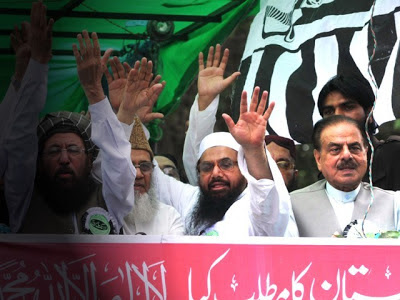 2012 ISLAMABAD, Nov 5: Gen (retd) Hameed Gul, former director-general of Inter-Services Intelligence, called on Pakistan Muslim League-N chief Mian Nawaz Sharif at the Punjab House on Monday and spent some time together. Confirming the meeting, Gen Gul told Dawn it was a long overdue courtesy call during which he inquired after the health of Mr Sharif’s ailing wife. They also discussed political issues, he added. “As a patriotic Pakistani, I expressed concern over the worsening situation in the country,” he responded when asked if anything important had come under discussion. After the Supreme Court judgment on Asghar Khan’s petition and Gen Gul’s assertion that he was behind the creation of the right-wing IJI against the PPP in late 80s, analysts believe the meeting was more than just a courtesy call. “Even if it was a courtesy call, a meeting between a former DG of the ISI and the head of a major political party will always attract media attention,” commented a political science teacher of the Quaid-i-Azam University, who requested not to be named. Moreover, he said, when the former ISI DG happens to be Gen Gul, who wouldn’t take notice of the meeting. In a TV interview last week Gen Gul admitted that he had played a role in the creation of the Islami Jamhoori Ittehad (IJI) during his term as ISI chief from March 1987 to June 1989. When asked about the reasons, he said: “I did this in my personal capacity.” “I had been a friend of former Jamaat-i-Islami chief Qazi Hussain Ahmad, Mian Nawaz Sharif (Mohammad Khan Junejo and General Fazl-i-Haq) and still am. I brought these politicians together for the sake of the country and I have no regrets for doing that,” Mr Gul said. About alleged distribution of funds among politicians by his successor, General Asad Durrani during 1990 general elections, he said he had no clue to that and refused to comment whether or not some politicians had received funds from the ISI. General Durrani, in an affidavit submitted in Asghar Khan case, has provided a list of politicians, including Mr Sharif, who were financed by the ISI in 1990 elections. Referring to Dr Abdul Qadeer Khan’s article, which appeared in an English daily on Monday and in which he described events leading to the then military establishment’s opposition to Benazir Bhutto, Gen Gul said: “My role in the creation of the IJI was natural which I had played for the safety of the country.” Dr Khan in his piece talked about the role of BB’s first government in capping uranium enrichment and supporting India against Sikh separatists. REFERENCE: Hameed Gul says his meeting with Nawaz was courtesy call BY Khawar Ghumman http://dawn.com/2012/11/06/hameed-gul-says-his-meeting-with-nawaz-was-courtesy-call/

Concerns of Benazir Bhutto by SalimJanMazari 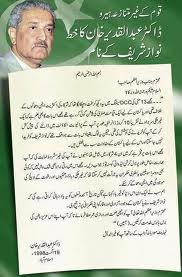 2012: Fact and fiction BY Dr A Q Khan Monday, November 05, 2012 During my long and close association with Mr Ghulam Ishaq Khan, I never once found him indulging in politics and never heard him saying anything against any politician. I never met or saw any politician with his very competent military secretary, Brig Muhammed Ajaib, who efficiently and honestly served him for five years. Concerning Gen Beg, I would like to narrate one incident here, which speaks for itself. I was in Gen Beg’s office just before the 1988 general elections when the chief election commissioner, Justice S A Nusrat, came to see him. During the talks Justice Nusrat said (probably to see what Gen Beg’s reaction would be) that Benazir Bhutto’s PPP was going to win the elections. Gen Beg’s immediate reaction was to say that if the lady wins, she will rule as per her constitutional right. Not then and not at any other time did I ever hear any adverse remarks about any politician from him. The question arises: why was it necessary to sack Benazir Bhutto’s government and prevent her from winning the next elections? My understanding is that, as soon as she came to power, widespread and reliable reports surfaced about massive corruption by Mr Asif Ali Zardari and his cronies. All the intelligence agencies were sending reports to the president and the chief of the army staff. Then one of her closest associates, a federal minister, was reported to have handed over a list of all Sikh resistance leaders (Khalistan supporters) to India, which resulted in their arrests and elimination by the Indian government. The Sikh insurgency had taken the pressure off Kashmir and the Pakistani army considered their handing over as an anti-Pakistan move. Furthermore, Benazir Bhutto had agreed to freeze the enrichment of uranium at five percent, in a move to please the Americans. In a meeting at the Presidency at which Gen Imtiaz (her military secretary) was also present, I was instructed accordingly. Nobody was happy with the decision, especially not the army and the ISI, and it was considered to be against national interests. Mr Bhutto, and later Gen Ziaul Haq, had never buckled under US and Western pressure and had kept the programme running at full speed. Later, Gen Waheed Kakar took full control of the nuclear weapons programme. Probably all these factors together led to the dismissal of her government and the efforts to stop her from winning the elections. What is intriguing here is that, during her second tenure and later on, neither she nor Nawaz Sharif nor Musharraf pursued the Asghar Khan case, while Benazir Bhutto even appointed Gen Durrani as her ambassador to Germany and Saudi Arabia. After all, Gen Durrani had played a prominent role against her government. Something doesn’t seem right. I cannot doubt the integrity, honesty and patriotism of Mr Ghulam Ishaq Khan and Gen Aslam Beg. I only knew Gen Durrani superficially, but many senior officers did not have much good to say about him. Only God knows the truth. REFERENCE: Fact and fiction BY Dr A Q Khan Monday, November 05, 2012 http://www.thenews.com.pk/Todays-News-9-141163-Fact-and-fiction 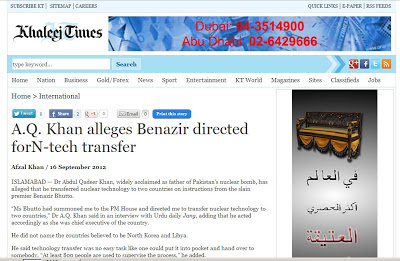 2012: A.Q. Khan alleges Benazir directed for N-tech transfer Afzal Khan / 16 September 2012 ISLAMABAD — Dr Abdul Qadeer Khan, widely acclaimed as father of Pakistan’s nuclear bomb, has alleged that he transferred nuclear technology to two countries on instructions from the slain premier Benazir Bhutto. “Ms Bhutto had summoned me to the PM House and directed me to transfer nuclear technology to two countries,” Dr A.Q. Khan said in an interview with Urdu daily Jang, adding that he acted accordingly as she was chief executive of the country. He did not name the countries believed to be North Korea and Libya. He said technology transfer was no easy task like one could put it into pocket and hand over to somebody. “At least 800 people are used to supervise the process,” he added. He said military ruler Gen. Pervez Musharraf beseeched him to publicly admit having transferred the technology saying it would save Pakistan’s nuclear programme from being eliminated by the US. Dr Khan alleged that Nawaz Sharif was reluctant to conduct nuclear tests in May 1998 in response to Indian tests for fear of US sanctions but he and some other people compelled him to do so. His delayed action, however, allowed a build-up of extreme pressure by the US and its allies. “Had he immediately decided to respond to India, there would have been no time to pressurise Pakistan whereas we had made it clear that we can conduct nuclear tests on a notice of half an hour,” he said. Dispelling impression he harboured political ambitions, Dr Khan said he had launched an outfit to preserve national unity. REFERENCE: A.Q. Khan alleges Benazir directed for N-tech transfer Afzal Khan / 16 September 2012 http://www.khaleejtimes.com/displayarticle.asp?xfile=data%2Finternational%2F2012%2FSeptember%2Finternational_September513.xml&section=international&col 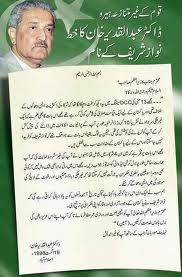 2012: Imran still politically immature:AQ Khan September 15, 2012  ISLAMABAD: Nuclear scientist Dr. Abdul Qadeer Khan said that Nawaz Sharif was not in favor of nuclear test blast, while the nuclear technology was passed on to other countries on the directive of Benazir Bhutto. In an exclusive interview to Jang correspondent, Farooq Aqdas, Dr. AQ Kahn said that the nuclear technology transfer process was not such that some one could give it to other country by just hiding it in the pocket, as it was guarded by eight hundred persons. AQ Khan said that then prime minister Benazir Bhutto had called him, gave the name of the two countries to be helped and she had given him a clear directive in this regard. AQ Khan further said that he was not self-governing instead he was bound to abide by the orders of the PM of the country and that explains he had to do it. Regarding his state TV confession of the crime during Musharraf era, he said that by doing so the nuclear program could be saved, he was told. AQ Khan said that Chaudry Shujaat was used by Musharraf for getting a confession from him. Replying to a question, AQ Khan said that he had great expectations from Imran Khan, but he was disappointed after two/four meetings with Imran. “Imran Khan’s political thinking is still immature and those having expectations from him will soon be disappointed”, he added. REFERENCE: Imran still politically immature:AQ Khan September 15, 2012 - Updated 103 PKT http://www.thenews.com.pk/article-67783-Imran-still-politically-immature:AQ-Khan 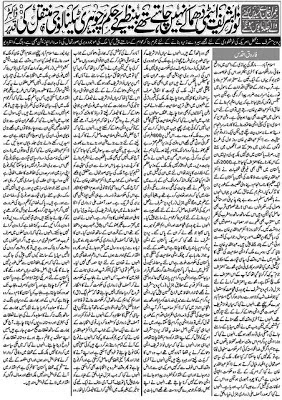 2012: Dr Qadeer calls on JI chief : LAHORE, Nov 7: On his mission of uniting ‘patriotic’ parties on a single platform, nuclear scientist-turned-politician Dr Abdul Qadeer Khan on Wednesday called on Jamaat-i-Islami chief Munawwar Hasan here. Briefing the media after the meeting, he said he was urging patriotic political parties to unite for setting up a grand alliance “to save the country from complete destruction before it was too late.” He said he would also meet PML-N leader Nawaz Sharif and PTI chief Imran Khan for the purpose. He cautioned that the masses were already deprived of Roti, Kapra and Makan, and if the things remained unchanged, they would not even get grass to eat. He said if the country got an honest leadership, it could achieve marvellous results, regretting that the present rulers were taking guidance from Washington instead of Makkah. He said the government was blaming the Taliban for the worsening law and order situation in the country but the fact was the actual responsibility rested on the people in power. It’s high time, he said, that honest and experienced people came forward to lead the nation in the right direction. He said the masses were facing countless problems and they should be wise to elect good people in the next elections. Mr Hasan said Dr A.Q Khan should have been the head of state but he could not rise to that office because he was not Mr 10 per cent. — Staff Reporter REFERENCE: Dr Qadeer calls on JI chief http://dawn.com/2012/11/08/dr-qadeer-calls-on-ji-chief/
Posted by Aamir Mughal at 3:44 AM