LAHORE: Taking a slightly different position from their traditional view point, Jamaat-i-Islami (JI) chief Syed Munawar Hasan Friday said that neither bombings (airstrikes) can help restore peace nor suicide attacks could pave way for the enforcement of Islamic Shariah. Addressing the congregation of Friday prayers at Mansoora mosque – the JI headquarters – he said that religious forces, especially Deobandi clerics should step forward and pave way for dialogue to save the country and also to prevent the emergence of a wrong image of Islam. The JI chief alleged that the Pakistan Muslim League-Nawaz (PML-N) did not hold peace talks with Tehrik-i-Taliban Pakistan (TTP) upon pressure asserted by the United States. Defending the Pakistani Taliban’s ideology, he said the notion that Taliban do not comply with law and constitution was propaganda that was being spread for some ‘special purpose’. “The government was fulfilling a longstanding wish of the US by destroying North Waziristan.” Hasan said if the religious forces did not rise at this moment, they would be driven to a blind alley and would have no way out. He claimed the religious parties had played a key role in framing the 1973 constitution, and it was their duty at this juncture to protect the country and the constitution. “A charge sheet has been issued against the religious parties and they would have to answer that.” The JI chief said that enemies had always used the differences between the Islamic sects and schools of thought as a weapon. “The need of the hour is that the Ulema (clerics) of Deobandi school of thought sit down with the Shias, the Ahle Hadith, and Ahle Sunnah to evolve an effective strategy to counter the current campaign against Islam.” Therefore, he added, it was the duty of the religious forces to go ahead with the talks with the Taliban. “Since a majority of the Taliban belongs to the Deobandi school of thought, it was for the Deobandi Ulema to take up this responsibility,” he said. REFERENCE: ‘No shariah through suicide attacks, no peace through airstrikes’ 2014-01-25 http://www.dawn.com/news/1082440/no-shariah-through-suicide-attacks-no-peace-through-airstrikes Daily Jang Friday, January 24, 2014, Rabi-ul-Awwal 22, 1435 A.H. Updated at: 2353 http://jang.com.pk/jang/jan2014-daily/24-01-2014/u8622.htm

Butchery of Taliban against the Shia Community is conveniently forgotten by the Jamaat-e-Islami, Imran Khan and all those who want to negotiate peace with these butchers --> Taliban 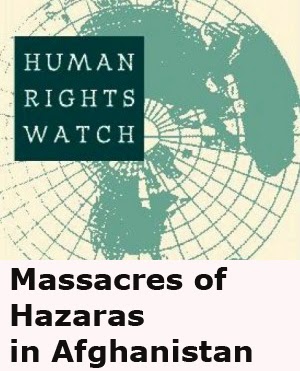 Afghanistan: The Massacre in Mazar-I Sharif: On August 8, 1998, Taliban militia forces captured the city of Mazar-i Sharif in northwest Afghanistan, the only major city controlled by the United Front, the coalition of forces opposed to the Taliban. The fall of Mazar was part of a successful offensive that gave the Taliban control of almost every major city and important significant territory in northern and central Afghanistan. Within the first few hours of seizing control of the city, Taliban troops killed scores of civilians in indiscriminate attacks, shooting noncombatants and suspected combatants alike in residential areas, city street sand markets. Witnesses described it as a "killing frenzy" as the advancing forces shot at "anything that moved." Retreating opposition forces may also have engaged in indiscriminate shooting as they fled the city. Human Rights Watch believes that at least hundreds of civilians were among those killed as the panicked population of Mazar-i Sharif tried to evade the gunfire or escape the city. NOVEMBER 1, 1998 http://www.hrw.org/reports/1998/11/01/afghanistan-massacre-mazar-i-sharif Read the report http://www.hrw.org/legacy/reports98/afghan/

The Massacre in Mazar-i Sharif 1998 by Aamir Mughal


Jamat-e-Islami say Sufi Muhammad is Kaafir and Al-Qaeda is Brother in Arms. 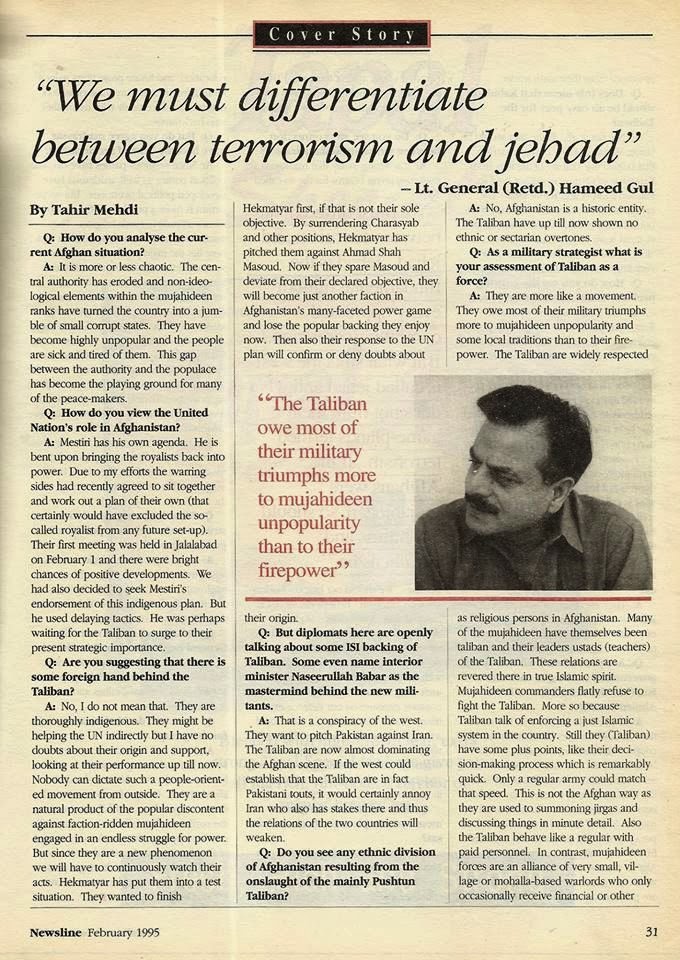 1998: How the Taliban slaughtered thousands of people - No mercy: men, women and children were murdered in their homes as Taliban gunmen took over Mazar-e-Sharif The Sunday Times , Nov.1,1998 By Michael Sheridan THE first detailed eyewitness accounts of the massacre of up to 8,000 people by Islamic fundamentalist Taliban fighters who ran amok in the northern Afghan city of Mazar-e-Sharif last August have been passed to western governments. Testimony compiled by international observers and handed to western diplomats in Pakistan reveals that hundreds of people were packed into containers where they suffocated when the doors were locked in the searing midday heat. Men, women and children were shot in their homes and on the street, and hospital patients were murdered in their beds. The massacre occurred when, during an offensive aimed at seizing full control of Afghanistan for the first time, Mazar-e-Sharif was overrun by the Taliban, who have imposed the world's most extreme interpretation of Islam, barring women from education, banning television and forcing men to wear beards. Statements made available to The Sunday Times describe a campaign of slaughter directed against a Shia Muslim minority, the Hazara. The evidence, regarded by experienced aid officials as "highly credible", paints a ghastly picture of butchery and rape as the Taliban shot and cut the throats of Hazaras. The claims are supported by the influential American group Human Rights Watch, which is due to reveal its own findings on the massacre today and will call on the United Nations to investigate what it describes as "one of the single worst examples of killings of civilians in Afghanistan's 20-year war". The detailed evidence of Taliban atrocities will embarrass western policymakers who still see the fundamentalists as useful players in a modern "great game" to keep Iranian and Russian influence out of Afghanistan and so ensure that the huge oil and gas riches of central Asia remain a prize for western multinationals. Ten diplomats from Tehran were among those who died, prompting Iran to mass 200,000 troops on its border with Afghanistan to bolster demands for the killers to be handed over for trial. Troop "manoeuvres" were due to begin yesterday. Based on eyewitness statements, The Sunday Times has pieced together an account of the nightmare that engulfed Mazar-e-Sharif when the Taliban entered the city from the west on the morning of August 8. 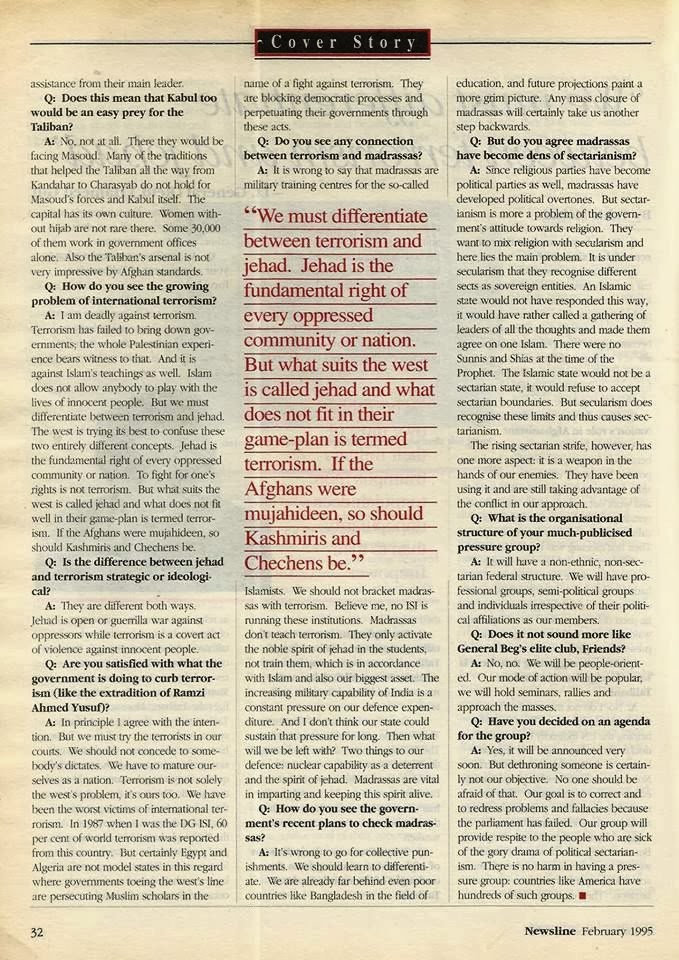 They were intent on avenging a massacre of some 2,000 of their own men in 1997, when the Hazaras and other fighters turned against them. There ensued what one witness called "a frenzy" of vengeance killing. The Taliban fighters swept through the city, firing heavy machineguns mounted on pickup trucks. One man described how the streets were covered with bodies and blood. The Taliban, he said, forbade anyone to bury the corpses for six days. On the second day, according to numerous witnesses, the Taliban began a house-to-house search for Hazara men. Hazaras, descended from Mongols, are easy to recognise by their distinctive Asiatic features compared with the ethnic Pashtuns who make up the ranks of the Taliban. They share their Shia faith with Iran, while the Taliban are Sunni Muslims. A witness whose testimony is described as "extremely reliable" by aid officials said most of the victims had been shot in the head, the chest and the testicles. Others had been slaughtered in what he called "the halal way" - by having their throats slit. One housewife, who has since fled to Pakistan, said the Taliban entered her house and shot her husband and her two brothers dead. Then they cut the men's throats in front of the woman and her children. Another piece of testimony explained why one Taliban was "very worried he might be excluded from heaven". He had personally shot people in nearly 30 houses, opting to kill them as soon as they opened the door. After killing the men in two homes, he learnt that they were not Hazara but Pashtun.  "That he had killed people in 28 Hazara households seemed not to cause him any concern at all," the witness said. Men not murdered on the spot were "stuffed into containers after being badly beaten", said another witness. He saw the doors opened on a container after all the men inside had died from suffocation. He also testified that some containers were filled with children who were taken to an unknown destination after their parents had been killed. Human Rights Watch has obtained gruesome confirmation of the Taliban's penchant for death by container. It quotes a man who was detained by the militia and saw container trucks filled with victims leaving the Mazar-e-Sharif jail several times every day. Once he watched as the Taliban opened the container doors to find three prisoners alive and about 300 dead. The Taliban drove the trucks to a desert site known as Dasht-e-Leili and ordered porters to dump the cargo of corpses in the sands. The Human Rights Watch report and other statements identify three Taliban leaders who appear to be guilty of incitement to kill victims purely because of their ethnic origin. They are: Mullah Manon Niazi, the new Taliban governor of Mazar-e-Sharif. Numerous witnesses heard him make speeches at mosques and on radio inciting hatred of Hazaras. "Wherever you go we will catch you," he said. "If you go up, we will pull you down by your feet; if you hide below we will pull you up by your hair." One witness testified that Niazi personally selected prisoners to be consigned to the death containers. Mullah Musa, the so-called director of public health. A witness said Musa toured a public hospital looking for Hazara patients to mark out for death. Later that day, the witness heard from a doctor that Musa had taken a group of gunmen to the army hospital, where they had murdered all 20 or so patients, and relatives who had been visiting them. Maulawi Mohammed Hanif, a Taliban commander who announced to a crowd of 300 people summoned to a mosque that the policy of the Taliban was to "exterminate" the Hazaras. International aid workers fear the killings are continuing following the recent fall of the central Afghan town of Bamiyan. They have said thousands of people remain unaccounted for. 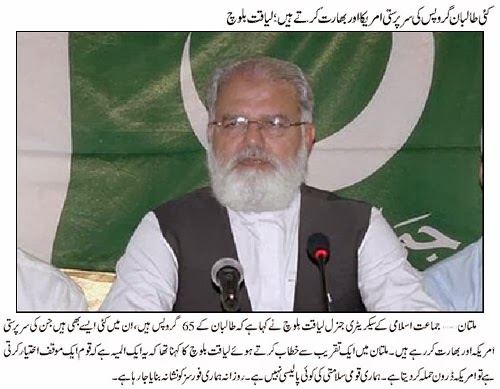 PESHAWAR: Former Ameer Jamaat-e-Islami (JI) Qazi Hussain Ahmad has said the Taliban were created by Western powers to achieve their own goals. Talking to the media in Peshawar, he said the Taliban took over as an independent force only because the US was not ready to listen to them after achieving its objectives. He said the Taliban got disappointed after they were ignored by the US and began to strengthen their force. Qazi said statements by US officials on the creation of Taliban had no weight as Hizb-e-Islami Afghanistan chief Gulbudin Hekmatyar had openly made such a statement long time ago. He said more than 500,000 people were displaced from the tribal areas and Swat and most of them were living as internally displaced people (IDP) in camps in Kacha Garhi and other places of the province. He said the situation in the country had worsened only because the Taliban had the patronage of foreign forces. Qazi said all the issues could be resolved through dialogue but the NWFP government agreed to implement the Nizam-e-Adl Regulation under pressure. Taliban created by Western powers: Qazi Monday, April 27, 2009 http://www.thenews.com.pk/TodaysPrintDetail.aspx?ID=174444&Cat=2&dt=4/27/2009 Jamaat-e-Islami says India and USA Supporting Taliban Groups Daily Jang 20 January 2014 Monday, January 20, 2014, Rabi-ul-Awwal 18, 1435 A.H. Updated at: 0150 http://jang.com.pk/jang/jan2014-daily/20-01-2014/u8166.htm
Posted by Aamir Mughal at 1:07 AM