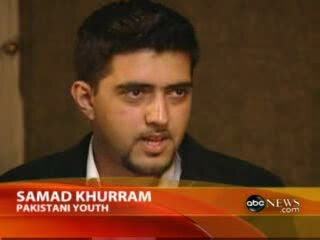 I am amazed that Mr Samad Khurram [Political Activist working for the Restoration of Judiciary's Independence in Pakistan] refused to accept award from US Ambassador Ms. Anne W. Peterson 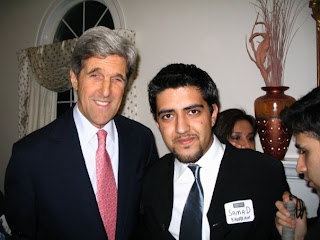 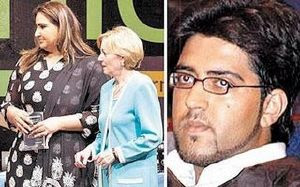 Samad Khurram rejected the US Award being offerred to him by the US Ambassador in Pakistan Anne W. Peterson 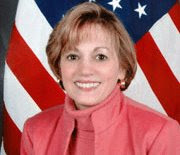 US Ambassador in Pakistan Anne W. Peterson
Whereas the same Mr Samad Khurram was the backbone for CJ Mr Iftikhar Chaudhary's Visit to the US where Chief Justice Iftikhar Chaudhry formally received the Harvard Law School Medal of Freedom during his visit to the United States in November 2008 [1] 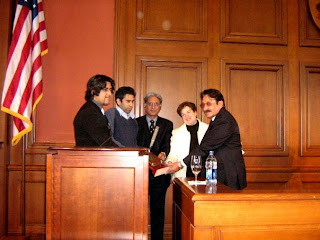 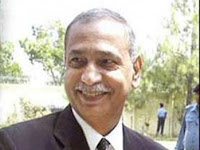 ISLAMABAD: Former Director-General of the Federal Investigation Agency (FIA) Tariq Khosa has refused to head a one-man commission to investigate the memo scandal, DawnNews reported on Saturday. The commission was set up by the Supreme Court. Khosa, who has also served as inspector general of Balochistan police, is a brother of Justice Asif Saeed Khosa and Punjab Chief Secretary Nasir Khosa. Earlier, former law minister Babar Awan had questioned Khosa’s nomination at a press conference by saying that he was a brother of the Punjab chief secretary and a judge of the Supreme Court. But those who worked with Khosa called him an ‘upright’ man and a ‘clean’ government officer. The scandal erupted when US citizen of Pakistani origin, Mansoor Ijaz, accused Pakistan’s former ambassador to the United States, Husain Haqqani, of masterminding an alleged memo sent to a senior US military official asking for help to rein in the Pakistani military after the American raid that killed Osama bin Laden in Abbottabad in May. Haqqani denied the allegation and resigned from his position of ambassador in the wake of the controversy. REFERENCES: Tariq Khosa refuses to head commission on memogate December 3, 2011 http://www.dawn.com/2011/12/03/tariq-khosa-refuses-to-head-commission-on-memogate.html •One-man commission named •PPP’s angry reaction •President, COAS, ISI chief to explain position: SC orders memogate inquiry, tells Haqqani not to go abroad December 2, 2011 http://www.dawn.com/2011/12/02/one-man-commission-named-ppps-angry-reaction-president-coas-isi-chief-to-explain-position-sc-orders-memogate-inquiry-tells-haqqani-not-to-go-abroad.html
I wonder why didn't CJ refuse to accept the award like Mr Samad Khurram did? Mr Justice Iftikhar Chaudhry [being a person who is a symbol of upholding law] should have lodged his protests to the American Media [instead of just photo session in the US] on continuing violation of Pakistan Air Space by the US Forces. 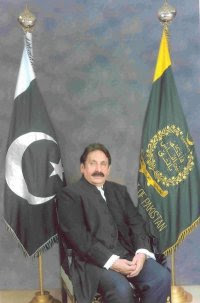 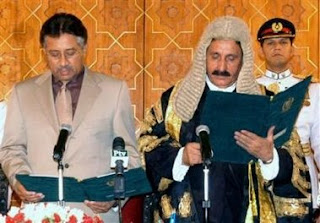 I wonder, did Mr Samad Khurram or any other born again Ram Jeth Malanis in Harvard Law School even try to meet the Former Law Graduates of Harvard Law School [and believe me these Former Graduates are the backbone of American Politics and Establishment and many amongst them are in US Central Intelligence Agency as well] to lodge even a peaceful protest against US Forces' daily violation of Pakistan's Airspace and these violation also culminates in many innocent deaths in NWFP's Tribal Belt.

Alberto R. Gonzales was the 80th Attorney General of the United States. Gonzales was appointed to the post in February 2005 by President George W. Bush.

Elliott Abrams is an American lawyer who has served in foreign policy positions for two Republican U.S. Presidents, Ronald Reagan and George W. Bush. He is widely labeled as a leading neoconservative. President George W. Bush appointed Abrams to the post of Special Assistant to the President and Senior Director for Democracy, Human Rights, and International Operations at the National Security Council on 25 June 2001.

Robert Bruce Zoellick was the eleventh president of the World Bank, a position he has held since July 1, 2007.[1] He was previously a managing director of Goldman Sachs,[2] United States Deputy Secretary of State (resigning on July 7, 2006) and U.S. Trade Representative, from February 7, 2001 until February 22, 2005.

President George W. Bush nominated Zoellick on May 30, 2007 to replace Paul Wolfowitz as President of the World Bank. On June 25, 2007, Zoellick was approved by the World Bank's executive board. He is a NEOCON AND HARD CORE PRO ISRAELI ZIONIST [CJ Iftikhar Chaudhary and Samad Khurram enjoy excellent company]

And there are many many more, just search in google.