To criticize any political government whether PPP or PML - N specifically Asif Ali Zardari one shouldn't need the crutches of International Republican Institute (IRI)'s report/survey, only law and order news and rising prices of basic utilities would be more than enough to put any government in shame. 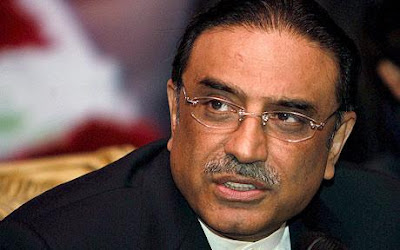 But our so-called Investigative Journalist-cum- GEO TV Political Analyst (read Tout) i.e. Kamran Khan [Correspondent of The News/Jang & Former Correspondent of The Washington Pots] and many like him are so insecure that to prove their credibility they always quote ISI, Army Sources, Unnamed Political Sources, or IRI Survey.

Dwindling faith in President Zardari’s capacity to act as a neutral, corruption-free, nationally respected leader of Pakistan waned further early this month when the Washington-based International Republican Institute (IRI), a pro-democracy group financed by the US government, reported in an in-depth survey that only about two in 10 Pakistanis carry any favourable opinion about President Zardari. As opposed to President Zardari’s terrible approval rating, the same IRI survey revealed that a big majority of Pakistanis, close to nine out of 10, hold the institution of the Pakistan Army in the highest esteem followed by the judiciary that won the support of seven out of 10 Pakistanis. Reference: Beleaguered Presidency left with single option By Kamran Khan Thursday, October 29, 2009 http://thenews.jang.com.pk/top_story_detail.asp?Id=25261

The International Republican Institute (IRI), considered the international branch of the U.S. Republican Party, and one of the four “core groups” of the congressionally created and funded National Endowment for Democracy (NED), apparently knew of the coup d’etat in Honduras against President Zelaya well in advance. IRI is well known for its role in the April 2002 coup d’etat against Venezuelan President Hugo Chávez and its funding and strategic advising of the principal organizations involved in the ouster of President Jean Bertrand Aristide of Haiti in 2004. In both cases, IRI funded and/or trained and advised political parties and groups that were implicated in the violent, undemocratic overthrow of democratically elected presidents. REFERENCE: The Role of the International Republican Institute (IRI) in the Honduran Coup The International Republican Institute talks of “coup” in Honduras, months before By Eva Golinger MONDAY, JULY 6, 2009 http://www.chavezcode.com/2009/07/role-of-international-republican.html

Let have look at the Credibility of International Republican Institute (IRI)

A brief history of the IRI is as follows: In a bid to make the world friendlier to US interests, President Ronald Reagan (a supporter of Apartheid South Africa) called for the creation of the National Endowment for Democracy in 1983. The US, he claimed, needed an organization that would "foster the infrastructure of democracy--the system of a free press, unions, political parties, universities- -which allows a people to choose their own way, to develop their own culture, to reconcile their own differences through peaceful means." As a result the National Endowment for Democracy (NED), which spawned the International Republican Institute (IRI), the National Democratic Institute for International Affairs (NDI), and United States Agency for International Development (USAID) were formed. NED receives about $50 Million from the US Congress. USAID requested a staggering $9.3 billion for 2007. Out of these three organizations, the IRI and USAID are the most active in the promotion of a world safe for US Democracy. The IRI at first "focused on planting the seeds of democracy in Latin America," according to its website. After the "Cold War, [it] has broadened its reach to support democracy and freedom around the globe." USAID states that U.S. foreign aid helps in "furthering America's foreign policy interests in expanding democracy and free markets while improving the lives of the citizens of the developing world."

Through what NED terms Consolidating Democracy, democratic principles and sovereignty are being violated. The NED, IRI and USAID attempt to unify opposition against a target government. They provide strategic and monetary support to the opposition. They also infiltrate university student organizations, women's and youth groups, trade unions, teacher associations and other sectors of civil society which they then into supporting the opposition parties that they have effectively turned into a coalition. Worse than instigating a coup (a top down mechanism of change), the IRI and USAID infect the very blood lines of the country by affecting "regime change" through civil society. Consolidating Democracy was successfully used in what the IRI refers to as the color revolutions in Ukraine (Orange), Georgia (Rose) and Kyrgyzstan (Tulip). In Haiti, democratically elected Aristide was overthrown using the same methods of unifying a rag-tag opposition and then mobilizing civil society behind it. But some countries such as Venezuela remain a failed target. The IRI's 2005 Programs in Africa webpage states that it "provided training for political parties in Angola to establish a strong and stable political party system, and reinforce the national reconciliation process." In Kenya it "worked with political parties to teach them how to develop positions and communicate them to voters." In Nigeria they "focused on strengthening and preparing political parties for the 2007 elections and fostering partnerships between the parities and civil groups". And in Liberia the IRI "sponsored the first-ever formal presidential candidate debates."

In September 2006, when receiving the IRI 2006 Freedom Award together with Laura Bush, Liberian President Ellen Johnson-Sirleaf thanked the IRI which "was particularly active in promoting [the] elections." She added that "Very quickly an office was established. They came, they did workshops. They brought political groups together. They worked with the media. They educated. They instructed. They supported. They assisted the process." She was in fact recounting the steps taken to consolidate democracy in Liberia by the foreign NGO. President Mbeki has in the past questioned to what extent South African civil society makes independent choices. This concern can be extended to the continent. For example, a Boston Globe survey "identified 159 faith-based organizations that received more than $1.7 billion in USAID prime contracts, grants and agreements from fiscal 2001 to fiscal 2005" as part of President Bush's Faith Based Initiative. The implications here are obvious. USaid has also tied acceptance of Genetically Modified food to foreign aid even in terms of disaster as in the case with Zambia in 2002. Organizations such as Oxfam have showed that GM foods in Africa would in the long run be harmful to the small scale African farmer, lead to the destruction of local food economies, create a cycle of dependency and cause more acute starvation. It was an absurd case of stopping starvation today by creating conditions for more starvation tomorrow.

And in even more direct interference with the internal economy and politics of African countries, USaid, has worked in concert with the World Bank to promote the now infamous Structural Adjustment Programs consolidated wealth for a corrupt elite while taking away education and health rights from the poor. But it is the hijacking of democratic processes by using civil society that should be of the most concern to Africans concerned with genuine democracy. The IRI and USAID don't have to win every African election they participate in – each parliamentarian and each political organization that gets a seat in the government becomes their lobbyist. In effect, they become shareholders in the new government. And as the American proverb says, "whoever pays the piper calls the tune." Reference: African Democracies for Sale By Mukoma Ngugi February 07, 2007 http://www.zmag.org/znet/viewArticle/2109