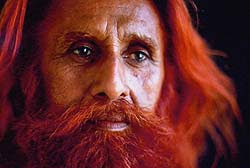 Sohrab Fakir is a Sufi singer. His full name is Sohrab Fakir Khaskhely(Reference: Maro Je Maleer Ja By: Khadim Hussain Chandio, p no. 320-21) {Another Sindhi Intellectual Mr Naz Sahito has poined that "Saaeen sohrab Fakir was not Khaskheli [by caste] .he belongs to Manganhar family, His forefathers migrated from Rajisthan to Khairpur state , his first cousins family still residing in Rajisthan'}. He was born in 1934 in Khairpur Mir's. His father, Hamal Fakir, was the disciple of Kush Khair Muhammad Fakir. Sohrab Fakir is recognized as the greatest living Sindhi folk singer in his style of music, playing the yaktaro (single stringed instrument) and chappar (wooden clappers). Sadly, a paralytic stroke recently left Saaiin Sohrab voiceless. He is spending his days at a Sufi shrine in Sindh. Aptly perhaps, the Fakir's rendering of a folk prayer asking for the intercession of the grace of Shah Latif is also included in this collection. He started singing at age of eight years with his uncles. He went to Khan Sahab Khety Khan in Rohri for more musical education. He sung his first song at shrine of Kush Khair Muhammad, was Kadhy Kadam Kaya Khan Bahar Ker. He started his career on Radio Pakistan, Khairpur with famous Raag (song) of Gamdil Fakir, Galiyan Prem Nagar Diyan, and he became famous everywhere in country. He performed in overseas, e.g. London, Norway, Belgium, Germany, Holland, France, Italy, Denmark, Switzerland, Saudi Arabia, Dubai, Iran, India and many countries of the world. Soharab Fakir was given the Sachal Award for his achievements. He passed away in Talpur Wada village near Thari Mirwah on Friday [23 Oct 2009] after protracted illness. Oh Surs & Ragas! Suhrab Faqir is dead
By Mansoor Mirani Saturday, 24 Oct, 2009 04:59 AM PST http://www.dawn.com/wps/wcm/connect/dawn-content-library/dawn/the-newspaper/national/oh-surs-ragas-suhrab-faqir-is-dead-409 صوفی گلوکار سہراب فقیر نہ رہے
علی حسن Saturday, 24 October, 2009, 00:09 GMT 05:09 PST http://www.bbc.co.uk/urdu/entertainment/2009/10/091023_sohrab_faqeer.shtml 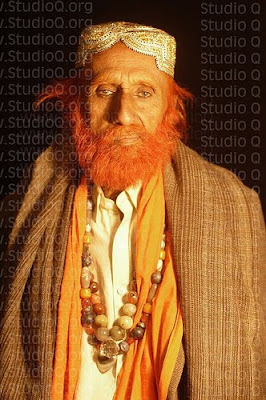 With love, all unalloyed, is dight

he flutters, he Kak, where with delight

from out his silken hair;

Show us the land, where fragrance rare

O loin-clothed, one, let us know,

the way you virgins met

Why from your eyes continuously

the tears of blood do flow?

O Sami! on us light bestow

of beauty that you found!

where love is made, they say;

Where there is neither night nor day

all shall Beloved see!

Common or uncommon, who tries

to see these eyes, is slain.

O camel, for such enterprise

master bred you with care;

With vigilance cross over now

Mumal we have to face this eve,

or when the sun doth rise;

With her consent on Kak's supplies

of blossoms you may browse.-

are robes of damsels fair...

have piled their long, fine hair.

From Beauty so entrancing, love

Their bodies all refreshed with atter

From fullsome platis sandle and musk

perfume all round the air;

of glistening gold do hold-

Today Mumal's in glorious from

Because Rano without compare,

Mumal had wounded many, lo

A pointed arrow struck her head

Although Rano not destined is

Mumal to be with thee-

This will be clear from Rano's love...

still not resentful be,

Weep not, but bear it patiently,

Be true to kinship new.

Kak could not hold those wanderers

Castles not tempt their mind...

No maid or mistresses their hearts

with magic strings could bind

For e'er Lahutis left behind

myraids of maids as these.-

Kak could not hold those wanderers

for wealth they did not care,-

It was by men of such a mould

Lahutis they could not ensnare

with all their coquetry.

They passed Kak at the corner, long

that corner turned have they...

To those who are now far away

what shall some 'Natir' do?

Ludhana is a hell mere

and left me torture here...

And Kak to me is poison sheer

the moment he is gone.

O Rano, hardly had you come,

you turned and went away

But were you not my spouse? why not

to wake me did you stay?

Then soon you would have known who lay

beside me on the bed.

Whole night my lamp did burn, but see

the dawn is breaking now;

Rano without thee I shall die-

In God's name come to me

Oh-all the crows of Kak to thee

as messenger I sent.-

I trimmed the wick, again, again,

oil is consumed at last

Weeping for Rano, night is past,

the whole of night I wept.

Orion stands above my head;

The time is past...he did not come

Rano, for whom I pined-

Fie on cursed night, without my love

it passed, and left me woe-confined-

To give me hell, he did not mind

now rests he in his dhat.-

Rano, I weep when I behold

Dust settled on beds and divans

so drab looks all and cold;

and nought but dust they hold-

Without you, trees and flowers fade

Who would bear my freaks mainfold

Continuously I watch your way,

mine eyes are at the door-

May you come back to me Rano,

I heaven do implore;

You hold my life, else many more

I did not realize my sweet,

the faults I did commit;

They now recoil on me, and hit

me justly in the face.

't was by your patience, I became

a human being dear-

't was through a whim of mine, my name,

myself, you came to know.

If Mendharo to my own house

would come as guest, to stay with me-

To flames I'd give self-consciousness

my knowledge and my ancestry;

Pride egoism I would throw

Into the stove, most certainly

My sacrifice for loved-one be

the home, parents, myself.

Who with a lion doth ally

herself, must steady be-

In Rano's wake do lie-

When resurrection day is nigh

you will of Rano think.

Go straight ahead, and look not back

nor turn this side or that,

Or else, a temple-turning smack

A messenger! in haste he is

By he is sent;

With promise: "one you love will reach

The speedy camel will not miss

to enter Kak at Dawn."

A message great and new arrived

We have received a gift divine,

from Giver of all light-

"Ask not for caste-all we invite

all are accepted here."

Where need I drive the camel? when

Glory all round is beaming?

Kak in my being doth radiate,

Of Rano sweet my soul is dreaming

Where need one drive the camel? when

great radiance reigns all round?

There is no other voice or sound

(available through your local music store in the West, I picked a copy up at Borders, or through Amazon records). As usual, the CD is evenly divided between purely instrumental pieces and vocal ones. The instrumental pieces include al-ghoza (double-barrel flute), benjo, gharro (earthenware pitcher), dholak (drums), surando (a string instrument played like a violin), etc.

But my favorite on this CD is the rendering of 'Raarno' by the masterful Sohrab Fakir recorded on his trip to Germany. Mercifully, the piece is 17min long so one can get a good feel for the depth and mood of the music, rather than short 5-6min snippets which are more typical in recent recordings. Sohrab Fakir's strong, melodious voice set in a Sur composed by Shah Latif, brings out the powerful imagery of the Katho Upanishad, woven in the context of a Sindhi folktale (Muumali-Raarno), and saturated with the perennial message of the spiritual search of Union. Sohrab Fakir is recognized as the greatest living Sindhi folk singer in his style of music -- playing the yaktaro (single stringed instrument) and chappar (wooden clappers). Sadly, a paralytic stroke recently left Saaiin Sohrab voiceless. He is spending his days at a Sufi shrine in Sindh. Aptly perhaps, the Fakir's rendering of a folk prayer asking for the intercession of the grace of Shah Latif is also included in this collection. Let us hope that he will once again have the opportunity to sing, even as his voice continues to enrich our lives. Courtesy: Heritage: New Sindhi CD, Katho Upanishad, and Sohrab Fakir by Gul Agha آغا گلَ جي ويراڳي اوطاق تي سنڌيءَ ۾ روح رهاڻ http://shikarpuri.wordpress.com/ http://clipmarks.com/clipper/Gul+Agha/tag/sindh/ Open Systems Laboratory http://osl.cs.uiuc.edu/people?user=agha