A nuclear power's act of proliferation by R. Jeffrey Smith and Joby Warrick 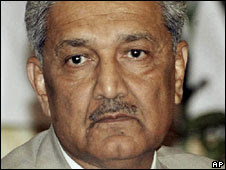 In 1982, a Pakistani military C-130 left the western Chinese city of Urumqi with a highly unusual cargo: enough weapons-grade uranium for two atomic bombs, according to accounts written by the father of Pakistan's nuclear weapons program, Abdul Qadeer Khan, and provided to The Washington Post.

The uranium transfer in five stainless-steel boxes was part of a broad-ranging, secret nuclear deal approved years earlier by Mao Zedong and Prime Minister Zulfiqar Ali Bhutto that culminated in an exceptional, deliberate act of proliferation by a nuclear power, according to the accounts by Khan, who is under house arrest in Pakistan.

U.S. officials say they have known about the transfer for decades and once privately confronted the Chinese -- who denied it -- but have never raised the issue in public or sought to impose direct sanctions on China for it. President Obama, who said in April that "the world must stand together to prevent the spread of these weapons," plans to discuss nuclear proliferation issues while visiting Beijing on Tuesday.

According to Khan, the uranium cargo came with a blueprint for a simple weapon that China had already tested, supplying a virtual do-it-yourself kit that significantly speeded Pakistan's bomb effort. The transfer also started a chain of proliferation: U.S. officials worry that Khan later shared related Chinese design information with Iran; in 2003, Libya confirmed obtaining it from Khan's clandestine network.

China's refusal to acknowledge the transfer and the unwillingness of the United States to confront the Chinese publicly demonstrate how difficult it is to counter nuclear proliferation. Although U.S. officials say China is now much more attuned to proliferation dangers, it has demonstrated less enthusiasm than the United States for imposing sanctions on Iran over its nuclear efforts, a position Obama wants to discuss.

"Upon my personal request, the Chinese Minister . . . had gifted us 50 kg [kilograms] of weapon-grade enriched uranium, enough for two weapons," Khan wrote in a previously undisclosed 11-page narrative of the Pakistani bomb program that he prepared after his January 2004 detention for unauthorized nuclear commerce.

"The Chinese gave us drawings of the nuclear weapon, gave us kg50 enriched uranium," he said in a separate account sent to his wife several months earlier.

China's Foreign Ministry last week declined to address Khan's specific assertions, but it said that as a member of the global Non-Proliferation Treaty since 1992, "China strictly adheres to the international duty of prevention of proliferation it shoulders and strongly opposes . . . proliferation of nuclear weapons in any forms."

Asked why the U.S. government has never publicly confronted China over the uranium transfer, State Department spokesman Philip J. Crowley said, "The United States has worked diligently and made progress with China over the past 25 years. As to what was or wasn't done during the Reagan administration, I can't say."

Khan's exploits have been described in multiple books and public reports since British and U.S. intelligence services unmasked the deeds in 2003. But his own narratives -- not yet seen by U.S. officials -- provide fresh details about China's aid to Pakistan and its reciprocal export to China of sensitive uranium-enrichment technology.

A spokesman for the Pakistani Embassy in Washington declined to comment for this article. Pakistan has never allowed the U.S. government to question Khan or other top Pakistani officials directly, prompting Congress to demand in legislation approved in September that future aid be withheld until Obama certifies that Pakistan has provided "relevant information from or direct access to Pakistani nationals" involved in past nuclear commerce.

The Post obtained Khan's detailed accounts from Simon Henderson, a former journalist at the Financial Times who is now a senior fellow at the Washington Institute for Near East Policy and who has maintained correspondence with Khan. In a first-person account about his contacts with Khan in the Sept. 20 edition of the London Sunday Times, Henderson disclosed several excerpts from one of the documents. [NOTE: Not in Post Article but inserted by me: REFERENCE: From The Sunday Times September 20, 2009 Investigation: Nuclear scandal – Dr Abdul Qadeer Khan - The Pakistani scientist who passed nuclear secrets to the world’s rogue states has been muzzled by his government. In a smuggled letter, AQ Khan reveals his side of the story http://www.timesonline.co.uk/tol/news/world/asia/article6839044.ece]

Henderson said he agreed to The Post's request for a copy of that letter and other documents and narratives written by Khan because he believes an accurate understanding of Pakistan's nuclear history is relevant for U.S. policymaking. The Post independently confirmed the authenticity of the material; it also corroborated much of the content through interviews in Pakistan and other countries.

Although Khan disputes various assertions by book authors, the narratives are particularly at odds with Pakistan's official statements that he exported nuclear secrets as a rogue agent and implicated only former government officials who are no longer living. Instead, he repeatedly states that top politicians and military officers were immersed in the country's foreign nuclear dealings.

Khan has complained to friends that his movements and contacts are being unjustly controlled by the government, whose bidding he did -- providing a potential motive for his disclosures.

Overall, the narratives portray his deeds as a form of sustained, high-tech international horse-trading, in which Khan and a series of top generals successfully leveraged his access to Europe's best centrifuge technology in the 1980s to obtain financial assistance or technical advice from foreign governments that wanted to advance their own efforts.

"The speed of our work and our achievements surprised our worst enemies and adversaries and the West stood helplessly by to see a Third World nation, unable even to produce bicycle chains or sewing needles, mastering the most advanced nuclear technology in the shortest possible span of time," Khan boasts in the 11-page narrative he wrote for Pakistani intelligence officials about his dealings with foreigners while head of a key nuclear research laboratory.

According to one of the documents, a five-page summary by Khan of his government's dealmaking with China, the terms of the nuclear exchange were set in a mid-1976 conversation between Mao and Bhutto. Two years earlier, neighboring India had tested its first nuclear bomb, provoking Khan -- a metallurgist working at a Dutch centrifuge manufacturer -- to offer his services to Bhutto.

Khan said he and two other Pakistani officials -- including then-Foreign Secretary Agha Shahi, since deceased -- worked out the details when they traveled to Beijing later that year for Mao's funeral. Over several days, Khan said, he briefed three top Chinese nuclear weapons officials -- Liu Wei, Li Jue and Jiang Shengjie -- on how the European-designed centrifuges could swiftly aid China's lagging uranium-enrichment program. China's Foreign Ministry did not respond to questions about the officials' roles.

"Chinese experts started coming regularly to learn the whole technology" from Pakistan, Khan states, staying in a guesthouse built for them at his centrifuge research center. Pakistani experts were dispatched to Hanzhong in central China, where they helped "put up a centrifuge plant," Khan said in an account he gave to his wife after coming under government pressure. "We sent 135 C-130 plane loads of machines, inverters, valves, flow meters, pressure gauges," he wrote. "Our teams stayed there for weeks to help and their teams stayed here for weeks at a time."

In return, China sent Pakistan 15 tons of uranium hexafluoride (UF6), a feedstock for Pakistan's centrifuges that Khan's colleagues were having difficulty producing on their own. Khan said the gas enabled the laboratory to begin producing bomb-grade uranium in 1982. Chinese scientists helped the Pakistanis solve other nuclear weapons challenges, but as their competence rose, so did the fear of top Pakistani officials that Israel or India might preemptively strike key nuclear sites.

Mohammed Zia ul-Haq, the nation's military ruler, "was worried," Khan said, and so he and a Pakistani general who helped oversee the nation's nuclear laboratories were dispatched to Beijing with a request in mid-1982 to borrow enough bomb-grade uranium for a few weapons.

After winning Chinese leader Deng Xiaoping's approval, Khan, the general and two others flew aboard a Pakistani C-130 to Urumqi. Khan says they enjoyed barbecued lamb while waiting for the Chinese military to pack the small uranium bricks into lead-lined boxes, 10 single-kilogram ingots to a box, for the flight to Islamabad, Pakistan's capital.

According to Khan's account, however, Pakistan's nuclear scientists kept the Chinese material in storage until 1985, by which time the Pakistanis had made a few bombs with their own uranium. Khan said he got Zia's approval to ask the Chinese whether they wanted their high-enriched uranium back. After a few days, they responded "that the HEU loaned earlier was now to be considered as a gift . . . in gratitude" for Pakistani help, Khan said.

He said the laboratory promptly fabricated hemispheres for two weapons and added them to Pakistan's arsenal. Khan's view was that none of this violated the 1968 Non-Proliferation Treaty, because neither nation had signed it at the time and neither had sought to use its capability "against any country in particular." He also wrote that subsequent international protests reeked of hypocrisy because of foreign assistance to nuclear weapons programs in Britain, Israel and South Africa.

The United States was suspicious of Pakistani-Chinese collaboration through this period. Officials knew that China treasured its relationship with Pakistan because both worried about India; they also knew that China viewed Western nuclear policies as discriminatory and that some Chinese politicians had favored the spread of nuclear arms as a path to stability.

But U.S. officials were ignorant about key elements of the cooperation as it unfolded, according to current and former officials and classified documents.

China is "not in favor of a Pakistani nuclear explosive program, and I don't think they are doing anything to help it," a top State Department official reported in a secret briefing in 1979, three years after the Bhutto-Mao deal was struck. A secret State Department report in 1983 said Washington was aware that Pakistan had requested China's help, but "we do not know what the present status of the cooperation is," according to a declassified copy.

Meanwhile, Chinese Premier Zhao Ziyang promised at a White House dinner in January 1984: "We do not engage in nuclear proliferation ourselves, nor do we help other countries develop nuclear weapons." A nearly identical statement was made by China in a major summary of its nonproliferation policies in 2003 and on many occasions in between.

Fred McGoldrick, a senior State Department nonproliferation official in the Reagan and Clinton administrations, recalls that the United States learned in the 1980s about the Chinese bomb-design and uranium transfers. "We did confront them, and they denied it," he said. Since then, the connection has been confirmed by particles on nuclear-related materials from Pakistan, many of which have characteristic Chinese bomb program "signatures," other officials say.

Hans M. Kristensen, director of the Nuclear Information Project at the Federation of American Scientists, said that except for the instance described by Khan, "we are not aware of cases where a nuclear weapon state has transferred HEU to a non-nuclear country for military use." McGoldrick also said he is aware of "nothing like it" in the history of nuclear weapons proliferation. But he said nothing has ever been said publicly because "this is diplomacy; you don't do that sort of thing . . . if you want them to change their behavior."