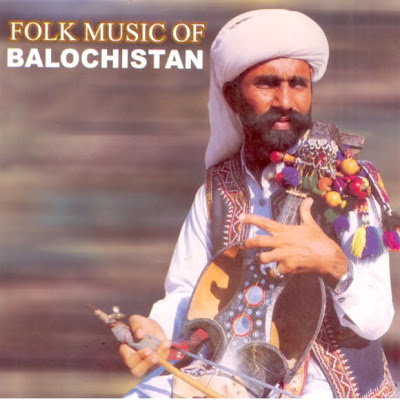 The suroz is a bowed string instrument with a long neck, similar to a fiddle or sarangi and played vertically. It is considered the national instrument of the Balochs. - "Notwithstanding the emergence of a strong nationalistic feeling among the Baloch population both in Iran and Pakistan, the existence of pahlawan (professional singers of verse narratives), and the love for suroz (a bowed instrument played as an accompaniment to narrative songs and considered to be the national instrument of the Baloch) among the educated classes, there seems to be no future for the oral tradition in Balochistan." REFERENCE: Suroz http://en.wikipedia.org/wiki/Suroz

Attired in a traditional Balochi costume and holding a decorated Suroz (a local musical instrument) in his left hand with fingers on its strings, Suchu Khan is out to conquer the world with his music. “Race, colour, language, they are no barriers for me. At my concerts abroad hundreds of youth dance on my tunes in jam-packed auditoriums. It is all very heartening,” he says. Suchu Khan is a recipient of the prestigious Tamgha-i-Imtiaz conferred on him by the president of Pakistan. His is a familiar name among folk music lovers not only in Balochistan but throughout Pakistan. Those who hear him play the Suroz do not let him go away before playing popular folk tunes for them. Suchu Khan was born in 1962 at Sui, Dera Bugti, and hails from a family famous for Suroznawaz whose male members hold the ancestral tradition of playing it for centuries. It was his uncles Zehru and Tungau who discovered the talent in Suchu at a very young age and encouraged him to learn how to play the instrument.
Suchu was also fascinated by the melody of the instrument and accompanied his uncles to performances — be it tribal gatherings, stage or radio stations. He is grateful to them for what he is today. “They were great teachers,” he says proudly. “One needs a lot of dedication and hard work to learn the Suroz. Beside that, one needs a good teacher. The Suroz is played with the help of fingertips which is not at all simple.” Encouragement from his audiences over the years has meant a lot to Suchu Khan. “Once just after my performance, Ata Shad (Baloch/Urdu poet) came on stage and kissed my fingertips. It was a great moment for me. Since then I have received many awards and appreciation but I have never been able to forget his gesture. Even today I often visualize the scene after every performance. It helps me work harder at my performances,” he says. He admits that surviving on music is tough and the journey has been a long and turbulent one. “There are many talented artistes in Balochistan who are not as fortunate. They hardly get noticed. One finds exceptionally talented musicians and singers among the Balochi nomads.”

Suchu is a widely travelled artiste. He had performed in the UK, France, Germany, Belgium, Italy, Spain, Greece, Norway, Denmark, Russia, Thailand, Philippine, Syria, Iraq, Jordan, Libya, Abu Dubai and Dubai. “Wherever I go, my pride on being a Pakistani goes with me,” he says. While abroad, he says he considers himself a cultural ambassador of Pakistan. “People ask me questions about my country, province, art, language and culture. “I tell them that Pakistan is quite rich in art and music. Suroz is a part of our heritage since time immemorial and I explain to them how this instrument is carved out of wood of the Parpuk tree that grows wild in Balochistan. They take a lot of interest and sometimes ask me to sell it to them,” he laughs. He expresses generous gratitude to all who encouraged him, specially the music production team of PTV and Radio Pakistan, Quetta. “They promoted me and my art. Without their patronage it would have been difficult. Had there been more like them, it would have been good for folk music,” he says. “I intend to set up an institute where I will teach talented youth how to play the Suroz. I want this tradition to continue and this art to live longer. It can be promoted through apprenticeship programmes under Lok Virsa or the arts councils network, provided they engage veteran musicians to pass this art on to the next generation,” says Suchu Khan. REFERENCE: Truly enchanted By Babar Baloch November 20, 2005 http://archives.dawn.com/weekly/images/archive/051120/images6.htm
Posted by Aamir Mughal at 1:35 AM