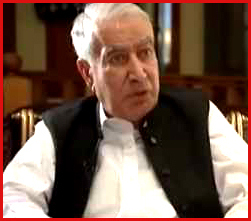 Opposing, Hating, and Differing  with Haqqani is one thing and white lies are  quite another! How people blatantly lie:) On 3rd Jan 2012 Brigadier Imtiaz while giving an interview to Dunya TV Khari baat Luqman ke Saath said that Hussain Haqqani was behind the Letter written to malign Benazir Bhutto in 1990 and ordered by Nawaz Sahrif whereas the News International Story says something different: (CJ should open the case of Mehran Bank filed by Asghar Khan) - ISLAMABAD - The man at the centre of Memogate scam, Hussain Haqqani, tried to involve Benazir Bhutto in a similar conspiracy during the first tenure of her government at the instance of Mian Nawaz Sharif, when Haqqani was media head of Nawaz government, claimed former head of Intelligence Bureau (IB) Brig Imtiaz Ahmad. In a private TV channel interview, Brig Imtiaz disclosed that Hussain Haqqani had prepared and sent a fake letter purported to be written by Benazir Bhutto as Prime Minister of Pakistan against country's nuclear programme and army. "Hussain Haqqani was the central character in a Memogate-like scandal against former Prime Minister Benazir Bhutto in 1989," Imtiaz Ahmad said, adding that at that time Nawaz Sharif was the Chief Minister of Punjab and Haqqani was head of his media team and had vast resources at his disposal. Brig Imtiaz Ahmad said that Hussain Haqqani manipulated the signature of Shaheed Benazir Bhutto on a fake letter and then photocopies were made and a campaign was launched, declaring her as anti-Pakistan and security risk. He claimed that this political campaign was the brainchild of Hussain Haqqani, who had the full backing of Punjab government. The former IB chief said despite categorical denial by Benazir Bhutto, this campaign was used as publicity tool against her. He said at that time he (Imtiaz) was holding an important position in Punjab and had expressed strong reservations over it. He said whether the present Memogate scandal is true or false, there is no doubt that WikiLeaks and Mansoor Leaks (Mansoor Ijaz) are twins of CIA. For the past one year these are being effectively used against Pakistan's defence institutions and the only purpose behind that is to weaken and destabilise Pakistan, he said. REFERENCE: Haqqani was involved in Memogate-like conspiracy against BB: Brig Imtiaz http://www.pakistantoday.com.pk/2012/01/haqqani-was-involved-in-memogate-like-conspiracy-against-bb-brig-imtiaz/ 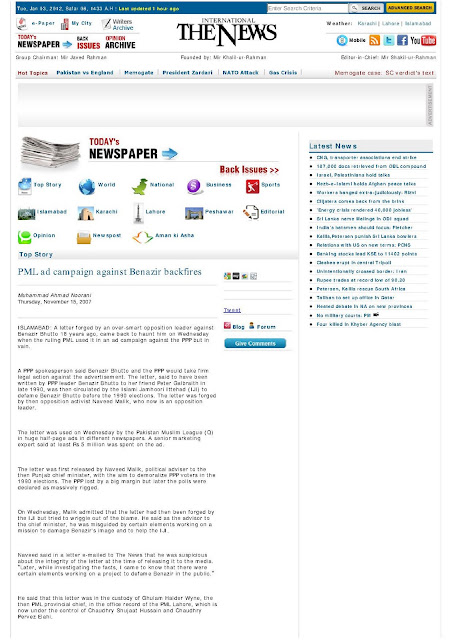 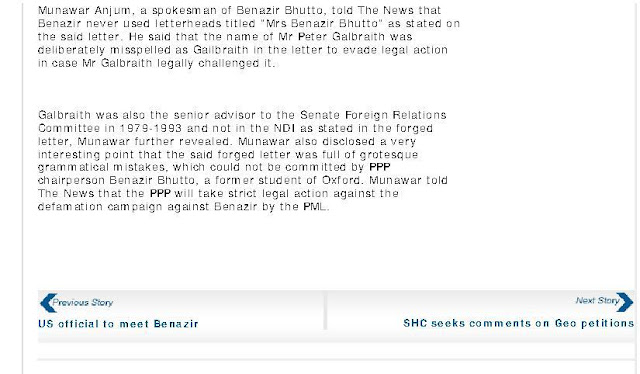 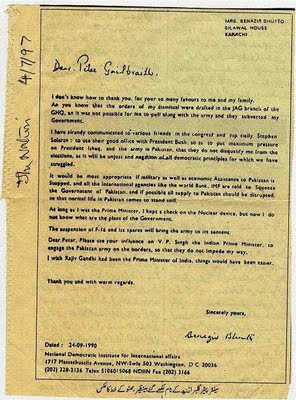 ISLAMABAD: A letter forged by an over-smart opposition leader against Benazir Bhutto 18 years ago, came back to haunt him on Wednesday when the ruling PML used it in an ad campaign against the PPP but in vain. A PPP spokesperson said Benazir Bhutto and the PPP would take firm legal action against the advertisement. The letter, said to have been written by PPP leader Benazir Bhutto to her friend Peter Galbraith in late 1990, was then circulated by the Islami Jamhoori Ittehad (IJI) to defame Benazir Bhutto before the 1990 elections. The letter was forged by then opposition activist Naveed Malik, who now is an opposition leader. The letter was used on Wednesday by the Pakistan Muslim League (Q) in huge half-page ads in different newspapers. A senior marketing expert said at least Rs 5 million was spent on the ad. The letter was first released by Naveed Malik, political adviser to the then Punjab chief minister, with the aim to demoralize PPP voters in the 1990 elections. The PPP lost by a big margin but later the polls were declared as massively rigged. On Wednesday, Malik admitted that the letter had then been forged by the IJI but tried to wriggle out of the blame. He said as the advisor to the chief minister, he was misguided by certain elements working on a mission to damage Benazir's image and to help the IJI. Naveed said in a letter e-mailed to The News that he was suspicious about the integrity of the letter at the time of releasing it to the media. “Later, while investigating the facts, I came to know that there were certain elements working on a project to defame Benazir in the public.” He said that this letter was in the custody of Ghulam Haider Wyne, the then PML provincial chief, in the office record of the PML Lahore, which is now under the control of Chaudhry Shujaat Hussain and Chaudhry Pervez Elahi. Munawar Anjum, a spokesman of Benazir Bhutto, told The News that Benazir never used letterheads titled "Mrs Benazir Bhutto" as stated on the said letter. He said that the name of Mr Peter Galbraith was deliberately misspelled as Gailbraith in the letter to evade legal action in case Mr Galbraith legally challenged it. Galbraith was also the senior advisor to the Senate Foreign Relations Committee in 1979-1993 and not in the NDI as stated in the forged letter, Munawar further revealed. Munawar also disclosed a very interesting point that the said forged letter was full of grotesque grammatical mistakes, which could not be committed by PPP chairperson Benazir Bhutto, a former student of Oxford. Munawar told The News that the PPP will take strict legal action against the defamation campaign against Benazir by the PML. REFERENCE: PML ad campaign against Benazir backfires Muhammad Ahmad Noorani Thursday, November 15, 2007 http://archive.thenews.com.pk/TodaysPrintDetail.aspx?ID=11162&Cat=13&dt=11/15/2007
Posted by Aamir Mughal at 4:13 PM