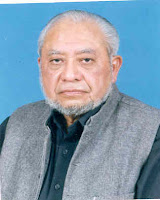 For example, after the 9/11, the former JI Amir Qazi Hussain Ahmad stated that al-Qaeda was a figment of the Americans’ imagination. On the contrary, the then JI Secretary General Syed Munawar Hassan, the current chief of the party, said that al-Qaeda leaders were our brethren (Nawa-i-Waqt, October 13, 2002). Commenting on these statements, Prof. Ahmad said: ‘There is no contradiction between the two. The Muslims in al-Qaeda are our brethren. They should be punished if they are criminals!’ He sounded mightily reluctant to hold Al-Qaeda responsible for 9/11. He even refused to give any credence to Gulbadeen Hikmatyar’s statement that Al-Qaeda was responsible for 9/11. (It may be added here that Hikmatyar is Jamaat-i-Islami’s favorite Afghan leader.) Instead, he finds “dozens of scholarly books” casting doubt on the official version more credible. REFERENCE: The Muslims in al-Qaeda are our brethren, says the top Jamaat-i-Islami ideologue Prof. Khurshid Ahmad Dec 16th, 2010 By Shakil Chaudhary and Mohammad Shehzad http://www.pol-dev.com/?p=678
Jamaat-i-Islami ideologue Prof. Khurshid Ahmad - 1 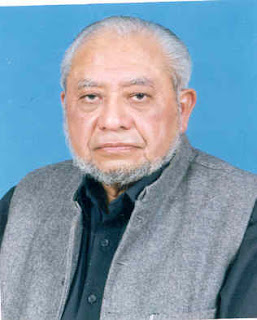 He justified the two-nation theory saying, the Hindus and the Muslims coexisted peacefully only under the Muslim rule and such an existence was otherwise impossible. ‘The colonial rule divided the Hindus and the Muslims…that resulted in the 1947 riots!’ He admitted that during the last 15-20 years, the Pakistani society had become increasingly intolerant. He conceded that the blasphemy laws were being misused, but he did not favor amending them. ‘The punishment for blasphemy is death – in Christianity, the Old Testament, the New Testament, the Quran and the precepts of the Holy Prophet Mohammad.’ The blasphemy does not apply to serious academic debate, he said. ‘It applies only to derogatory remarks.’ He dismissed the argument that the Barelvis consider the Deobandis and the Ahl-i-Hadith blasphemers. On the Kashmir jihad, Prof. Ahmad said that the JI has no organizational relationship with the Hizbul Mujahideen. ‘But of course, we do meet and whatever the Hizb is doing, it is its fundamental right.’ The JI India and JI Pakistan have different ideas on certain issues such as Kashmir though the source of inspiration for them was the same. He justified it saying that they became different and independent organization after the partition because the political situation had changed. He said that Israel was an illegitimate country, but did not support the annihilation of the Israeli Jews. In fact, he supported the idea of a single state in which the Jews and the Palestinians live together. He acknowledged that the US and NATO played some positive role in the Balkans, but they allowed the massacre of the Muslims to continue. Their intervention was aimed at preventing the revival of Islamic movements there. REFERENCE: The Muslims in al-Qaeda are our brethren, says the top Jamaat-i-Islami ideologue Prof. Khurshid Ahmad Dec 16th, 2010 By Shakil Chaudhary and Mohammad Shehzad http://www.pol-dev.com/?p=678
Saudi Fatwa on Osama bin Laden Death http://www.scribd.com/doc/100995249/Saudi-Fatwa-on-Osama-bin-Laden-Death
Saudi Fatwa on Osama bin Laden Death 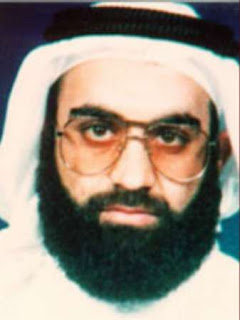 Terror mastermind captured – Terror mastermind captured – Khalid Sheikh Mohammed is thought to be the man who masterminded the attacks on 11 September. His capture in Pakistan was seen as a key success in the US fight to counter al-Qaeda. BBC News Online presents key video reports following the arrest. Tuesday, 4 March, 2003, 22:56 GMT  http://news.bbc.co.uk/2/hi/in_depth/2820179.stm  - KARACHI – Under immense pressure from the United States, a slow and gradual operation has begun in Pakistan against the strongest political voice of Islamists and the real mother of international Islamic movements, of which Osama bin Laden’s International Islamic Front is the spoiled child. In a surprise move this week, Pakistan’s federal minister of the interior, Faisal Saleh Hayat, listed a number of incidences in which members of the Jamaat-i-Islami (JI), the premier fundamentalist party in the country, had been tied to al-Qaeda, and called on it to “explain these links”. “It is a matter of concern that Jamaat-e-Islami, which is a main faction of the Muttahida Majlis-e-Amal [MMA], has neither dissociated itself from its activists having links with the al-Qaeda network nor condemned their activities,” Faisal said, adding that “one could derive a meaning out of its silence”. The MMA is an alliance of six religious parties that gained unprecedented electoral victories in national elections in 2002. One of its members is the leader of the opposition in the Lower House, while the MMA controls the provincial government in North West Frontier Province. It also forms part of a coalition government in Balochistan province. The MMA has 67 seats in the 342-seat National Assembly, with just under a third of them held by the JI. Asia Times Online predicted that the JI would be targeted (Jihadi’s arrest a small step for Pakistan , Aug 10) and now contacts confirm that moves have already started against associates of the JI in its strongest political constituency, Karachi. The next phase will most likely be in Rawalpindi and southern Punjab. Several close affiliates are believed to have been arrested by the Inter-Services Intelligence (ISI) without charges being laid against them. Pakistan turns on itself By Syed Saleem Shahzad Aug 19, 2004  http://www.atimes.com/atimes/South_Asia/FH19Df05.html  Khalid: A test for US credibility By Syed Saleem Shahzad Mar 6, 2003  http://www.atimes.com/atimes/South_Asia/EC06Df04.html  Profile: Al-Qaeda ‘kingpin’ Page last updated at 14:04 GMT, Friday, 13 November 2009 http://news.bbc.co.uk/2/hi/south_asia/2811855.stm http://www.bbc.co.uk/news/world-12964158 ‘THE MASTERMIND’ For smug KSM, federal court could be perfect arena By Peter Finn Washington Post Staff Writer Saturday, November 14, 2009 http://www.washingtonpost.com/wp-dyn/content/story/2009/11/13/ST2009111300917.html?sid=ST2009111300917
Jamaat-i-Islami ideologue Prof. Khurshid Ahmad - 3 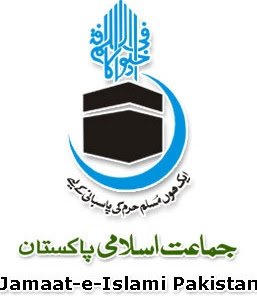 ISLAMABAD: One of the top security agencies on Wednesday picked up Raja Ehsan Aziz, a member of Tehrik-e-Islami (TI), for his alleged connections with terrorists who had attacked the Parade Lane Mosque in Rawalpindi and Moon Market in Lahore. Tehrik-e-Islami is a splinter group of the JI. Two female members of the Tehrik have already been taken into custody. Sarwat Wahid, another female member whose son’s car was used in the Parade Lane Mosque attack, is missing. Also her son, Jawad, who was studying in Faisalabad after doing A Level from Beacon House School System, is missing. Aziz, a graduate of Columbia University who also served on senior positions at the Foreign Office, is a retired professor of International Relations, Quaid-i-Azam University. His elder son is an Army doctor. Aziz was taken away from his house in G/10-3 on Wednesday evening by sleuths of the Counter-Terrorism Cell, his wife Amira Aziz told The News. Amira, an ex-MNA of Jamaat-e-Islami and now a Shura member of the Tehrik, is a religious scholar and writes columns in an Urdu daily. Aziz’s driver, Phool Zeb from Nowshera, has already been arrested as investigators found a mobile SIM allegedly used for conversation during the attacks on the Parade Lane Mosque and Moon Market, was issued in his name. Likewise, the car used in the mosque attack belonged to Jawad, the son of a Tehrik-e-Islami woman, Sarwat Wahid, a resident of I-8 Sector, Islamabad. Both of them are missing since then. Likewise, Aziz’ son, Omer, a student of Islamic International University, has not returned home for the last five days. JI splinter group leader, females held for links to suicide attackers Friday, December 18, 2009 By Umar Cheema http://www.thenews.com.pk/TodaysPrintDetail.aspx?ID=214063&Cat=2&dt=12/21/2009
Jamat e Islami Terrorist Dr. Usman was mastermind of Attack on GHQ
URL: http://www.youtube.com/watch?v=SeUXYXiAkyM&feature=player_embedded

Aziz has been picked up for the second time, his wife said, denying any links of the family with terrorism incidents. “I’m a sworn enemy of America and can pay any price for it but I strongly oppose terrorism within Pakistan,” Amira Aziz told The News. She said the intelligence operatives had been following the women activists of Tehrik-e-Islami for the last six months and harassed them. She alleged that her husband was beaten black and blue when picked up last time and kept in illegal custody for a night. Amira said her son, Omer, a heart patient, was very upset when intelligence guys kept his father in their custody for a night. A female member of Tehrik, Najma Sana, who lives in G-9/1, is already in the agency’s custody for the last 10 days. Sarwat Wahid, after being chased by the intelligence agency, left Islamabad for Karachi where she was again pursued by the police. Her sister and children in Karachi have been arrested to press for recovery of Sarwat who has gone underground there. Sarwat’s son, Jawad, is also missing. Tahira Mumtaz, another female member of the Tehrik, was twice called for investigation over her alleged assistance to Sarwat to flee the capital. Altaf Aziz Khattack, SHO, said he was not aware of any such incident. He asked this correspondent to take up the matter with the R A Bazaar police in whose jurisdiction the mosque was attacked. When contacted, officials of the concerned police station said that they had not arrested Ehsan Aziz, adding the Army was investigating the attack and the matter may be taken up with them. The DG ISPR could not be contacted. REFERENCE: JI splinter group leader, females held for links to suicide attackers Friday, December 18, 2009 By Umar Cheema http://www.thenews.com.pk/TodaysPrintDetail.aspx?ID=214063&Cat=2&dt=12/21/2009
Saudi Fatwa on Usaamah Ibn Laadin Al Khaarijee  http://www.scribd.com/doc/98399399/Saudi-Fatwa-on-Usaamah-Ibn-Laadin-Al-Khaarijee
Saudi Fatwa on Usaamah Ibn Laadin Al Khaarijee
Posted by Aamir Mughal at 2:22 AM