ISLAMABAD: Following the decision taken by the Supreme Court to form a commission on the memogate issue, it is time to tone down the rhetoric on the subject, say experts well versed in internal and external security issues. They say efforts are being made by some elements to turn the tables on those who discovered the evidence of the scandal and to put them into bad light. It is a simple case of national security, which is being politicised. Also, it was former Prime Minister Nawaz Sharif and not the ISI or the army chief who have taken the matter to the SC so as to ascertain who the real culprits are behind all this mess. “An impression is being projected by vested interests that DG ISI had personally investigated the memogate while the fact is that the DG ISI only established the authenticity of the memo and is requesting for an honest investigation so that the real perpetrators of the memo could be brought to justice,” said an expert. Meanwhile, continuous reports about sacking of senior military officials are not diminishing the impact of the crisis perpetuated by the memogate. The memogate has already stretched the tensions between the government and military, which have taken diametrically opposite views on the sensitive issue. “Now if any decision on sackings of army and ISI chief is taken despite public assurances by the prime minister, we all know that it could have dangerous consequences,” says an expert working at an Islamabad think-tank dealing with national security. He added that while the civil-military tensions had come down to some extent, the continuous appearance of such reports was keeping everybody on the edge. “It is about time we toned down such reports,” he said, adding that speculative stories were not in anybody’s interest. An authoritative source made it clear the army did have a major role in the country’s security. “The memo cannot be simply brushed aside. However, at the same time, the media hype on sackings of ISI and army chiefs should end as it is furthering the already explosive situation.” It is to be noted that any such step, while creating chaos, would also seriously damage Pakistan’s stance on the war on terror and other national security issues. REFERENCE: Time to tone down rhetoric on memogate, say experts Waqar Ahmed Monday, January 02, 2012 http://www.thenews.com.pk/TodaysPrintDetail.aspx?ID=85412&Cat=2

A Los Angeles court ruled that cricket hero-turned-politician Imran Khan was the legal father of a four-year-old illegitimate southern California girl. "Imran Khan is the father of the child," superior court commissioner Anthony Jones said on August 13, after a brief hearing. Khan, who had refused to co-operate by taking a blood test for the genetic determination of paternity, did not show up for the proceedings. His attorneys also failed to appear, so a default judgement was entered. Khan led Pakistan to a World Cup triumph in 1992. Earlier this year, he failed in his bid to become prime minister of Pakistan. "We believe the complaint, as originally filed, was ill-motivated," said Khan's New York attorney, Bernard Clair. "We believe the mother may have been the unwitting tool of my client's opponents." Sita White, who lives in Beverly Hills, had a relationship with Khan in 1987-88 and, when they met again in Los Angeles on October 2, 1991, she told him she wanted to have his baby, her attorney Gloria Allred said. "We did not request child support," Allred said. "We hope that, one day, he will open his heart to his little daughter and give her the love, respect and support every little girl deserves. "White got pregnant and Khan told her he hoped it was a boy. When he learnt the baby would be a girl, Khan expressed disappointment and said the child would not be able to play cricket. He urged White to have an abortion, but she refused," Allred said. Tyrian Jade was born on June 15, 1992, at Cedars-Sinai Medical Center. Since her birth, Khan has neither seen nor spoken to the child although he and White have spoken periodically during that period," said Allred. "He never paid any child support." During his quest to become prime minister, Khan denied having fathered an illegitimate child, which could have made him ineligible to become prime minister. "He categorically denies the paternity of this child," Clair said. "We think to use the child as a pawn in such a publicity circus demonstrates, to us at least, that the mother has other reasons for pursuing paternity." Khan, 42, said he dated and frequented night clubs during his days as a cricketer and, before that, as a student at Oxford University. But, since retiring from sports in 1992, he said he has transformed himself into a devout Muslim. He even vowed to marry a woman who observed purdah (life behind the veil). But, in 1995, he married British heiress Jemima Goldsmith. His political opponents have attacked Jemima, the daughter of the late English billionaire, Sir James Goldsmith, for her Jewish heritage. Khan says, though his wife's ancestors were Jewish, she was Protestant and had converted to Islam to marry him. UNI. REFERENCE: Imran Khan fathered illegitimate child, rules California court http://m.rediff.com/news/aug/14imran.htm 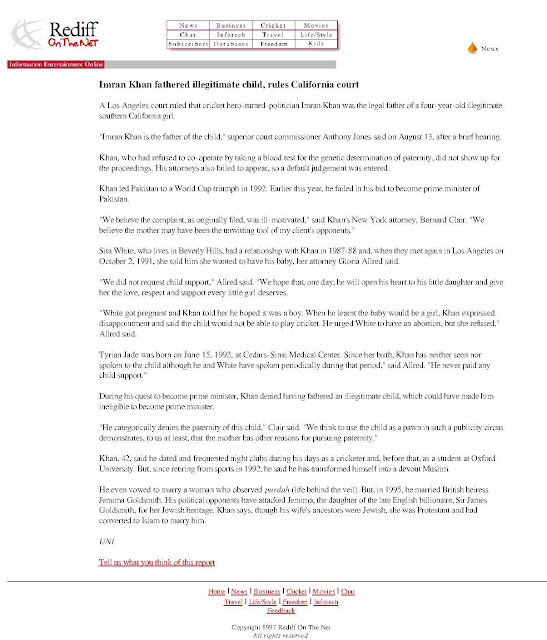 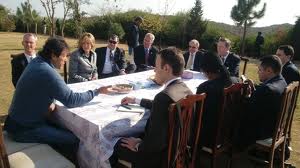 On the current security situation in Pakistan, Khan advised that the USG should use local tribes to deal with Taliban and other militant forces. He said that, in order to be able to work with tribesmen, we have to understand the "tribal character," which, he said, is primarily marked by hospitality and revenge. He denounced the use of aerial bombings and drone operations, arguing that they have created animosity and caused local tribesmen to join militant forces in order to seek revenge. (Note: Khan also pointedly stated that the GOP allows the "drone attacks" to occur, then lies to the Pakistani public that it has no control over them to deflect the public's anger. End Note.) Khan argued that such operations were radicalizing Pakistani youth, not just among the poor but also among the educated, middle classes. Dialogue, policing, and intelligence gathering should be the cornerstone of anti-militancy efforts in the tribal areas instead of the use of military force, Khan contended. Noting that he was recently in Swat, he went on to accuse the Pakistan Army of extrajudicial killings, summary executions, and "sexual humiliation" of residents in some villages. REFERENCE: US embassy cables: Imran Khan criticises 'dangerous' US policy Wednesday 1 December 2010 08.37 GMT http://www.guardian.co.uk/world/us-embassy-cables-documents/247596

Listen to internet radio with deepakchopra on Blog Talk Radio

Mansoor Ijaz - An American businessman of Pakistani Ancestry, an investment banker and media commentator, mostly in relation to Pakistan, Iraq, and Afghanistan. He is the founder and chairman of Crescent Investment Management LLC, a New York investment partnership since 1990 that includes retired General James Alan Abrahamson, former director of President Reagan's Strategic Defense Initiative. Away from Crescent's daily business affairs, Ijaz serves on the College Foundation Board of Trustees at the University of Virginia and is a member of the Council on Foreign Relations. Ijaz appears regularly on a variety of financial and political news programs for CNN, Fox News, BBC, Germany ARD TV, Japan NHK, ABC, and NBC. Mansoor Ijaz: The Invisible Hand in US-Pakistan Relations by deepakchopra Featured Host in Business Sat, Dec 31, 2011 http://www.blogtalkradio.com/deepakchopra/2011/12/30/mansoor-ijaz-the-invisible-hand-in-us-pakistan-relations

Ijaz is the same person who called for declaring the Inter-Services Intelligence (ISI) a terrorist organisation, Haqqani was quoted as telling the president. A few days later, the same person then reportedly met the head of ISI Lt. General Ahmed Shuja Pasha, Haqqani reportedly added. “What does this indicate?” he was quoted as rhetorically asking the president. Haqqani, sources added, also referred to a statement of Pakistan Tehreek-e-Insaf Chief Imran Khan on October 30, where he was implicated in the scandal for the first time. “I was summoned on November 15 … how could Imran know about it on October 30,” Haqqani was quoted as saying. REFERENCE: Memogate: Adamant ambassador set to face troika By Kamran Yousaf Published: November 21, 2011 http://tribune.com.pk/story/295132/memogate-adamant-ambassador-set-to-face-troika/ 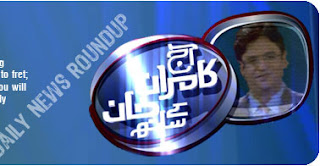 In Greek mythology, Pandora was the first woman on earth. Zeus ordered Hephaestus, the god of craftsmanship, to create her and he did, using water and earth. The gods endowed her with many talents; Aphrodite gave her beauty, Apollo music, Hermes persuasion, and so forth. Hence her name: Pandora, "all-gifted". When Prometheus stole fire from heaven, Zeus took vengeance by presenting Pandora to Epimetheus, Prometheus' brother. With her, Pandora had a jar which she was not to open under any circumstance. Impelled by her natural curiosity, Pandora opened the jar, and all evil contained escaped and spread over the earth. She hastened to close the lid, but the whole contents of the jar had escaped. If tomorrow someone even worse than Mansoor Ijaz appear on GEO TV with a bundle of manufacture story against Pakistan would Imran Khan, Mir Shakil ur Rehman, GEO TV, Ansar Abbasi, Mohammad Malick, Shaheen Sehbai, and last but not least Kamran Khan facilitate him/her against Pakistan as well like GEO did in the last few days (if anything goes wrong then Supreme court should take notice and call everybody mentioned above to prove what Imran Khan boasted in a procession without an Legal Enquiry and court proceedings because guilty by suspicion" is not a Justice and US Ambassador Cameron Munter boasted that Pakistan needs Rule of Law and Constitution while commenting on a meeting with Imran Khan in a GEO TV's Capital Talk  22 Nov 2011), the group mentioned above has prepared a case against Pakistan by giving credibility to a person who is know Anti-Pakistan Army and Nuclear detterrance as well  dated 23 Nov 2011, even Saleem Safi and Najam Sethi have raised this question in the very same newsgroup (Jang/The News International/GEO TV) who together played havoc with Pakistan Defence Assets. Pakistan is one of those unfortunate countries where the Sanctimonious Intellectuals discuss the blame on speculations and assumptions even if it is at the cost of the integrity and sovereignty of the country. Differring with PPP or any other government is one thing and putting country's fate at the stake for settling some political score is quite another and that is the usual story with the Jang Group of newspaper and their Journalists/TV Anchors particularly Shaheen Sehbai, Kamran Khan, Mohammad Malick and Ansar Abbasi despite knowing an established fact (with reference, history and footage) that Mansoor Ijaz and his Neocon Lobby had destroyed Iraq by raising False Alarm of Weapons of Mass Destruction and Mansoor Ijaz is exactly doing the same again and Jang Group of Newspapers is part and parrcel in this ugly game. During a TV Show of GEO TV "Aaj Kamran Khan Kay Sath dated 18 Nov 2011" and earlier on Bolta Pakistan of AAJ TV dated 16 Nov 2011 the resident editor of The News International, Mr. Mohammad Malick opined that raising objection on Mansoor Ijaz' credibility is of no use! Very well as Mr. Malick suggest we should apply Mansoor Ijaz "Rant" as a cardinal truth and Mr. Mohammad Malick should plead case against Pakistan in the world community particularly in UN by quoting from Mr. Mansoor Ijaz "Excellent Pieces" on Pakistan, and particularly Mansoor's Lie on WMD in Iraq, let us proceed but before proceeding to the detailed background of this Neocon War Monger i.e. Mansoor Ijaz, we must keep one thing in mind that Mohammad Malick (Resident Editor, The News International) also has several blot on his character e.g. Muhammad Malick (List of journalists given plots in Islamabad Published: November 1, 2010 http://tribune.com.pk/story/70940/list-of-journalists-given-plots-in-islamabad/ Journalist Corruption Scandal – Mohammad Malick JUNE 3, 2009 http://pkpolitics.com/2009/06/03/journalist-corruption-scandal-mohammad-malick/.
Posted by Aamir Mughal at 6:34 AM