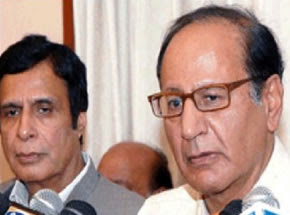 First it was Chaudhry Shujaat Hussain, who after remaining former president General Musharraf’s main ally and beneficiary for nearly eight years, declared his party’s opposition to the corruption laundering bill. It was soon followed by former prime minister Nawaz Sharif who, in the presence of some of his top party leaders, declared at a news conference that the PML-N would oppose the bill tooth and nail. - Bill not to be taken to parliament: Govt retreats on NRO spat By Our Special Correspondent Tuesday, 03 Nov, 2009 01:16 PM PST http://www.dawn.com/wps/wcm/connect/dawn-content-library/dawn/the-newspaper/front-page/bill-not-to-be-taken-to-parliament-govt-retreats-on-nro-spat-219 The major opposition parties — the PML-N and the PML-Q — and Fata members also protested in the National Assembly on bringing the NRO to parliament. “I want to ask those seven members, who voted for the NRO whether they want to legalise corruption by giving a clean chit to criminals and the corrupt.” Chaudhry Pervaiz Elahi, whose party was in the government when the NRO was promulgated, described the NRO as a black law and said it is the collective responsibility of parliamentarians to demonstrate political wisdom and maturity by rejecting the ordinance. Zardari-led dispensation throws in the NRO towel Tuesday, November 03, 2009 http://www.thenews.com.pk/top_story_detail.asp?Id=25350 President retreats on NRO issue By Asim Yasin Tuesday, November 03, 2009 - PPP decides not to table bill in parliament; allies consulted; MQM plays key role http://www.thenews.com.pk/top_story_detail.asp?Id=25349 Opposition assails NRO, stages walkout from NA By Asim Yasin Tuesday, November 03, 2009 http://www.thenews.com.pk/top_story_detail.asp?Id=25358 Nawaz threatens long march against NRO By Muhammad Anis Tuesday, November 03, 2009 http://www.thenews.com.pk/top_story_detail.asp?Id=25356

WHY THESE ACTS OF OMISSION AND COMMISSION ARE BEING IGNORED BY THE MEDIA?
QUOTE

Please explain the dirty and very dangerous advertisement campaign which was initiated by PML-Q after the death of Benazir Bhutto after her assassination in 2007. Reference : Reports said that PML of Chaudhry Shujaat Hussain had given ads, asking all the non-Sindhis living in the province to provide the details of losses they suffered during the riots following the assassination of Benazir Bhutto. The party intended to compensate their losses. After a strong reaction from all sides, the party the very next day removed the term non-Sindhis and said that Sindhis could also apply for the same. EC asked to take notice of controversial ad Thursday, January 10, 2008 By Mumtaz Alvi http://www.thenews.com.pk/daily_detail.asp?id=90407 , KARACHI: The PML-Q Punjab has amended the language of a controversial advertisement it published on riot damage compensation for non-Sindhis in Sindh, after a bad reaction from the southern province?s party leaders and workers. The advert now says Sindhis (in bold lettering) can also apply for compensation. PML-Q Punjab alters ethnically exclusive ad By Amar Guriro and Qazi Asif http://www.dailytimes.com.pk/default.asp?page=2008%5C01%5C06%5Cstory_6-1-2008_pg12_1 .

Please explain the fraudulent Ad campaign in the national newspapers against Benazir Bhutto, which was initiated by your party before her death? Reference: ISLAMABAD: A letter forged by an over-smart opposition leader against Benazir Bhutto 18 years ago, came back to haunt him on Wednesday when the ruling PML used it in an ad campaign against the PPP but in vain. A PPP spokesperson said Benazir Bhutto and the PPP would take firm legal action against the advertisement. The letter, said to have been written by PPP leader Benazir Bhutto to her friend Peter Galbraith in late 1990, was then circulated by the Islami Jamhoori Ittehad (IJI) to defame Benazir Bhutto before the 1990 elections. The letter was forged by then opposition activist Naveed Malik, who now is an opposition leader. The letter was used on Wednesday by the Pakistan Muslim League (Q) in huge half-page ads in different newspapers. A senior marketing expert said at least Rs 5 million was spent on the ad. The letter was first released by Naveed Malik, political adviser to the then Punjab chief minister, with the aim to demoralize PPP voters in the 1990 elections. The PPP lost by a big margin but later the polls were declared as massively rigged. PML ad campaign against Benazir backfires By Muhammad Ahmad Noorani http://www.thenews.com.pk/top_story_detail.asp?Id=11162

What do you have to say on the statements of Talal Akbar Bugti and Nawab Aali Bugti, son and grandson of Nawab Akbar Bugti respectively, have alleged that Shaukat Aziz, PML-Q President Chaudhry Shujaat Hussain and PML-Q Secretary General Mushahid Hussain Sayed are the real killers of the 22nd chieftain of the Bugti tribe. Reference: Trial of Shaukat, Shujaat, Mushahid sought for Bugti?s murder By Mazhar Tufail Wednesday, June 24, 2009 ISLAMABAD: Despite being sworn enemies of one another, two immediate heirs of slain Nawab Akbar Bugti have together accused former Prime Minister Shaukat Aziz and two top leaders of the Pakistan Muslim League-Quaid (PML-Q) of involvement in the killing of the veteran Baloch leader and have demanded their trial. http://www.thenews.com.pk/top_story_detail.asp?Id=22908
There was a news against you for being bank defaulter. Reference: [News Clipping is attached] More References: Top guns got Rs 54bn loans written off By Rauf Klasra Tuesday, October 23, 2007 http://www.thenews.com.pk/print3.asp?id=10768 ISLAMABAD: As the present government completes its five-year term in office on November 15, it has been officially disclosed in a secret report that the top guns of Pakistan got Rs 53.499 billion bank loans written off on the basis of a decision taken by the financial team of Gen Pervez Musharraf in October 2002. PML-N urges SC to take action on loan write-offs * Ahsan says 2 sitting CMs also beneficiaries of loan writing-off Staff Report Daily Times - Site Edition Wednesday, October 24, 2007 http://www.dailytimes.com.pk/default.asp?page=2007\10\24\story_24-10-2007_pg7_24 ISLAMABAD: The Supreme Court must take suo motu action and ask the government to make public the names of all those who have benefited through the writing off of over Rs 53 billion in loans, said PML-N Information Secretary Ahsan Iqbal. He termed the writing off of over Rs 53 billion in loans a ?plunder of public money?. In a statement issued here on Tuesday, he said, ?This is yet another mega scandal of the Musharaf regime which has come out in public.

How would you define PPP Reference against you filed in NAB when PPP was in opposition? Reference:

Daewoo Corp of Pakistan and others

1. The daily ?The News? in its publication of 19 June 2003 (Copy enclosed with the complaint) gave the details which were given by the Jamali government to the National Assembly Secretariat wherein it was revealed that an amount of Rs 18 billion was written off during the last three years (1999-2002) of the military regime.

2. The accused respondents where some of them being holders of public offices in the terms of Section 2 of the NAB Ordinance 1999 and the rest of the accused which are business enterprises had obtained loans from the different financial institutions.

Why did you approach the Lal Mosque Mullahs when your government wiped them out during Musharraf Military Regime? Reference: A dangerous game February 14, 2008 Thursday Safar 06, 1429 http://www.dawn.com/2008/02/14/ed.htm#1 DOES Chaudhry Shujaat realise what a dangerous game he is playing? He and several PML personalities have met Maulana Abdul Aziz of Lal Masjid fame and there are reports that the hard-line cleric is to be released. Whether or not he is guilty of any crime is to be decided by the court. But there are cases against him relating to his involvement in the Lal Masjid insurgency last summer. The ?deeds? of the brainwashed commandos wearing polka dotted kaffiyehs and led by him and his dead brother, Ghazi Abdul Rashid, have included arson, murder, kidnapping (including those of some Chinese nationals), illegal use of firearms, etc. Only a court can release him if it acquits him of the charges. Maulana Fazlur Rahman, too, visited him, and one of Abdul Aziz?s relations told a press conference that his family expected him to be released. On the eve of the general election?

Did ISI or General Aslam Beg offered you money for ulterior motives? Reference: Shujaat says Beg offered him massive fundsDAWN/The News International, KARACHI 23 April 2003, Wednesday, 20 Safar 1424 http://www.karachipage.com/ http://karachipage.com/news/Apr_03/042303.html ISLAMABAD: Leading politician Ch Shujaat Hussain has reopened the controversy over Army's role in politics by admitting that he and his cousin Ch Pervez Elahi were offered millions of rupees by the then Army chief General Mirza Aslam Beg in 1991 for political purposes from Mehran Bank accounts. Mehran Bank scandal had cost Rs 9.92 billion to the national exchequer. Ch Shujaat is the first politician to openly confirm that he was offered massive money for political purposes by a sitting Army chief in 1991 for political purposes.

Tell us something about Co-operative Companies Scam of 90s.

MOST IMPORTANT : TEXT CANNOT BE COPIED.

High treason case against Nawaz *From Shujaat Ali Khan Week Ending : 15 June, 1995 http://www.lib.virginia.edu/area-studies/SouthAsia/SAserials/Dawn/1995/15Je95.html
LAHORE, June 12: Former prime minister Mian Nawaz Sharif has been charged with high treason in a complaint lodged with police by the Punjab Home Secretary, Hafeez Akhtar Randhawa.Also cited as the opposition leader's co-accused are the former federal interior secretary, Senator Chaudhry Shujaat Hussain and former provincial governor Mian Muhammad Azhar.The complaint has been filed in the Qila Gujjar Singh police station, Lahore, under Section 2 of the High Treason (Punishment) Act 1973, enacted pursuant to Article 6 of the Constitution which prescribes death as the only punishment for the offence.The complaint was produced on Monday before a five-member full bench of the Lahore High Court as it took up the bail petitions of the treason case accused.

The military's alliance with some of Pakistan's most corrupt politicians has also raised serious questions over President Musharraf's pledge to fight corruption. The military regime's backing of Chaudhry Shujaat Hussain has evoked strong criticism from political parties. The Chaudhries are allegedly, not only involved in the infamous multi-billion rupee cooperative scam, but have also had numerous loans written off. Similarly, the military has propped up Imtiaz Sheikh, a notoriously corrupt former bureaucrat, to counter the PPP in Sindh. The leader of the Sindh Democratic Alliance (SDA), Sheikh is believed to be one of the most corrupt civil servants who rose to power under former Sindh Chief Minister, Jam Sadiq Ali. Sheikh is now seen as the military's candidate for Sindh's chief ministership. Reference: The General's Selection By Zahid Hussain [Monthly Newsline Oct 2002] http://www.newsline.com.pk/NewsOct2002/cover1.htm
WHAT ABOUT THESE LOAN DEFAULTERS? 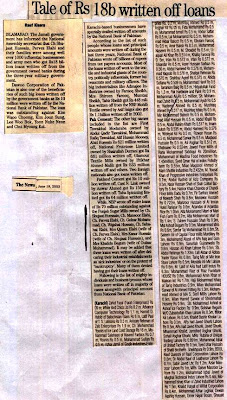 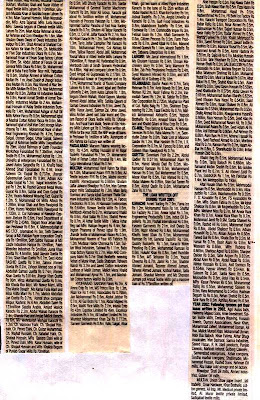 Some other facts about Chaudhry Brothers:
1. Do you know they just gave themselves an NRO in Punjab by having Ch. Zahiruddin 'elected' Chairman of Public Accounts Committee?
See: Zaheer takes on PAC to Chaudhrys’ satisfaction!
"...Over the next three-and-a-half years, the committee will scan accounts of the period when Chaudhry Pervaiz Elahi was the chief minister therefore the Chaudhrys would never want a ‘troublemaker’ as head of the PAC, says a party man...."

(Interesting Note: This story certainly puts to shame the earlier story by the very same paper.)

2. Let's not forget the ongoing scandal of the Rs 13 Billion Bank of Punjab Scam. The main accused Sheikh Afzal is the Chaudhrys' front man ("Investment Adviser") and wonder how much he got into their pockets. And it was the Chaudhrys who set up the whole scam, appointed Hameesh Khan as President, got the loans approved, etc.
(Note: Interestingly, the names of Chaudhry Brothers are not mentioned by the now "free" Supreme Court. Another person heavily involved in the scam -- former Chief Secretary Punjab and current Federal Finance Secretary Salman Saddique -- who was Chairman of the Board of Directors of the BoP at the time and heavily involved in the fraud is also not being mentioned.

3. PML-Q has accepted recently on many talk shows that the choice offered to them by Musharraf for the BB deal was either doing away with limits on third-term Prime Minister or the NRO and they chose NRO. So much for claiming "we had nothing to do with it!"