Sexual Harassment & Rampant Misogynism on Pakistani TV Channels: Now watch this Buffoon i.e. Waseem Badami [ARY ONE TV] who during a program instead of cutting the call allowed the "abusive language against a women on air" and despite listening and watching the "vulgar comment", Waseem Badami behaves as if nothing has happened and carried on - Thoughtless, Brutes and insensitive to the core and yet they talk about Aafia Siddqui - When newscasters having no background knowledge or political sense would host a politisal talk show then this is bound to happen. Shame on ARY TV. I wonder where is the brain of TV Producers? Do they even prepare the script or just go on air by reading the headlines of Daily Jang, sorry to say it is "Filthy". TV Channels recited "Marsiya" for the recent Brutality in Sialkot for full month [no doubt it was tragic] but these very TV Channels are brutalizing the society unintentionally or intentionally by not banning such "Brute" from TV permanently for not behaving like a gentleman with woman.
Sher Afgan Niazi VS Sharmila Farooqui


Latest "Tamasha" between PPP and Pakistan Tehreek-e-Insaf is worth watching. 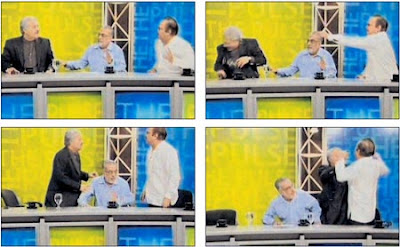 LAHORE: In a Business Plus programme, Pakistan Tehreek-e-Insaaf Sindh President Naeemul Haq threw a glass towards Sindh Chief Minister Qaim Ali Shah’s adviser Jamil Soomro. During the programme ‘The Pulse’, Haq strongly criticised Soomro’s leadership, alleging the government had failed to rule. But on receiving a defensive statement from the CM’s adviser, the PTI leader hurled a glass of water towards him. Both the political leaders got furious and started arguing with each other, while the audience was amazed at watching such an ‘action-packed’ show. It is pertinent to mention here that three weeks ago, some Indian political leaders, also in a TV programme, proved their stances after squabbling with each other on-screen. daily times monitor. REFERENCE: In a Business Plus programme Saturday, November 13, 2010 http://www.dailytimes.com.pk/default.asp?page=2010\11\13\story_13-11-2010_pg7_25
PPP V/S PTI (WWF) @ B PLUS EXCLUSIVE


The word "Bharwat - Pimping" used by Mr. Jameel Soomro was not a nice word at all - by the way PTI 's leader, Mr. Naeemul Haq is a Former Newscaster/Economist in Indus News and NEWSONE and now listen the "Racist and Extremely Prejudiced Comment" Imran Khan against an entire community, and even more shameful the way Imran Khan mock people with Black Colour and Africans.
Racist and Prejudiced Comment against a Community.

hmm great site for All indian and pakistani tv channels, bookmarked it

keep it up man!