Jang Group's Haroon Rasheed quoted Mansoor Hallaj on Osama Bin Laden whereas Osama and others like him were Ikhwanis (Jamat-e-Islami) and for them Mansoor Hallaj was an Heretic:) more shameful is the fact that Historically Mr. Haroon is wrong because there was time gap between the death of Sufi Master Junaid Baghdadi and Mansoor Hallaj and their meeting cannot be proved through any narration. (Reference: Shariat wa Tariqat by Late. Maulana Abdur Rahman Kailani) Reality of Sufism - V http://chagataikhan.blogspot.com/2008/10/reality-of-sufism-v.html  Reality of Sufism - VI http://chagataikhan.blogspot.com/2008/10/reality-of-sufism-vi.html
http://ejang.jang.com.pk/5-3-2011/Karachi/page6.asp#;
http://ejang.jang.com.pk/5-3-2011/Karachi/pic.asp?picname=06_06.gif


If you talk of Islam and Excellent books then for Guidance [Hidayat] only Two sources are Excellent i.e. Quran and Hadith [for day to day advices Riaz As Salehen, Al Lu Lu Al Marjan and Mishkat (These three books are Compilation of Authentic and Verified Hadiths] are sufficient and any other book which we cannot corroborate with Quran and Rightful Sunnah can only be called Bida’at [Innovation] Sufi books like Kashf Al Mahjub by Ali Hajweri, Ahya ul Uloom by Ghazali, Mathnavi by Rumi, Fissusl Hikm and Fathoohat-e-Makki by Ibn Arabi, Tawaseen by Mansoor Al Hallaj and last but not the least Ghunyatut Talibeen by Abdul Qadir Jeelani are full of False, Concocted, Fabricated and Weak Hadiths. 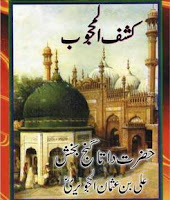 Ali Hajweri [alleged Data] arrived in Lahore on the orders of Masood Ghaznavi and Lahore was under the rule of Masood Ghaznavi [s/o Mehmood Ghaznavi] and Ghaznavis have themselves appointed Hindu Governor for Lahore. By the way Three Top Generals in Ghaznavi’s Army were hindu. Sufi Master of Al Hajweri i.e Shiekh Abul Fazal had ordered Ali Hajweri to go to “Hind” to wipe out “Idolatry and Polytheism” [Shiekh of DATA forgot to send Ali Hajweri to Banaras [Holy City of Vedanta] and Sheikh Abu Fazal also “forgot to predict” that in 21st Century Hindus and Sikh would often visit DATA DARBAR. [What happened to the mission of Sheikh Abul Fazal for which he deputed Ali Hajweri i.e. to wipe out "Idolatry and Polytheism" ]. Pakistanis wanted to Demolish “House of Idols [Buth Kada-e-Hind] whereas same Pakistan worship Muslim Idols in Pakistan. 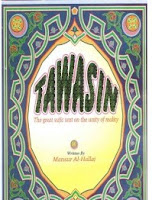 Ali Hajweri aka DATA was misogynist to the core and he used to declare that Women is responsible for every Evil in this world [this ideology is of Jews and Christians]. The alleged Data was basically a Women Hater to the core and his books are full of such Hate Speech against Woman [DATA remained bachelor all his life]. {Books of Alleged Data: Kashf Al Mahjoob, Kashf Al Asrar, Minhaj Al Deen, Al Bayan La Ahlil Ayan} These Mullahs [read Sufis] have only one Role for women while discussing women they [DATA too] forget that Women is also Mother, Daughter and Sister. DATA [Provider is only Allah], Ghaus [Is only Allah], Dastgeer [is only Allah].
Muslim Scholars of Lahore Objected on the direction of Kabah when a Mosque was being built in Lahore and Ali Hajweri through his “Miracle” arranged that the Kaabah is seen in Lahore. [Prophet Mohammad (PBUH) was a Prophet from Allah and he [PBUH] couldn’t do that during Hudaybiya Treaty and had to go back. These Sufis have made a mockery of Islam in their False Teaching.
For Reference: reading Aab-e-Kausar by Sheikh Ikram published in 1947 and 23 edition are published after partition by Darus Saqafat-e-Islamia Lahore – And on the Reality of Alleged Data read Shariat Aur Tareeqat by Abdul Rahman Kailani [you will be amazed to know the discrepancy as to how these Tazkaras and Malfoozat of Sufis are compiled without even bothering about to check the authenticity of Ali Hajweri's arrival in Lahore, Zanjani's time of Death and even Ali Hajweri's alleged services for Islam]
Sufis link their Chain to Hazrat Hasan Basari [May Allah have mercy on his soul] and Sufi says that Hasan Basri was given this “Sufi Science” by Hazrat Ali [May Allah be pleased with him] whereas no meeting ever took place between Hazrat Ali [RA] and Hasan Basari.
Therefore this Drama of Sufism and Sufi [DATA INCLUDED] is nothing but Bida’at in Islam which started after 300 years of Prophet Mohammad [PBUH] – Origin of this term Sufi is not even known in Arabic Grammar. [Ref: Talbees Iblees [The Devil's Deception - by Abul Faraj ibn Al Jawzi]
Patriotic Reverse Gear of Kamran Khan & Jang Group - GEO TV 4 May 2011

My only point is this that why should we blame USA when our several TV Anchors for instance Kamran Khan of GEO TV who 'SUCCESSFULLY' [Al-Qaeda commander claims responsibility for 9/11 attacks Wednesday, July 23, 2008 Accuses Pakistan of inflicting more damage on his organisation; Mustafa says al-Qaeda men also attacked Danish embassy in Islamabad These comments were made in an interview with Najeeb Ahmed that was broadcast on Monday on Geo TV's Aaj Kamran Khan Kay Saath programme. This was the first detailed interview in five years of a senior al-Qaeda leader. http://www.thenews.com.pk/top_story_detail.asp?Id=16144 ] interviewed some obscure and concocted Militant Abu Mustafa Al Yazid [What is Al-Qaida ? Aaj Kamran Khan K saath P-1 http://vidpk.com/14526/What-is-Al-Qaida-?-Aaj-Kamran-Khan-K-saath-P-1%2F http://vidpk.com/channel_detail.php?chid=41 ] and relayed it on GEO TV for creating more problem for Pakistan. How the hell they get such interviews when even the high tech Western Agencies couldn't trace them??? Months after right after 911 Hamid Mir filed a front page Super Headline In Daily Dawn that Osama Bin Laden has 36 Nukes [Hamid Mir wasn't even Dawn Employee not even on contract Daily Dawn, Hameed Haroon, Hamid Mir & Nuclear Bombs http://chagataikhan.blogspot.com/2009/04/daily-dawn-hameed-haroon-hamid-mir.html Hamid Mir Calamity & Geo TV. http://chagataikhan.blogspot.com/2008/12/hamid-mir-calamity-geo-tv.html ] what was the purpose of such stories which always embarrassed Pakistan. There are several Militants of Northern Areas who used to address crowded Press Conference and getting coverage in every Private TV Channels in Pakistan. Basically this Rat Race amongst TV Channels has ruined the mental peace of Pakistanis. Nobody is saying to ban TV Channels but did anyone ever questioned the news they present, its veracity, its source, and its background. These TV Channels are keeping alive this "Alleged War On Terror" to make money out of the miseries of People of NWFP, Baluchistan and FATA. Let me quote you a dialogue from a best seller by Late. Harold Robbins

'The truth,' I said. 'Can't any of you tell the truth? Do you always have to manipulate others doing your dirty work for you when the truth is so much simpler?'

Kindly note that "Jang Group" has changed the Format and all the stories filed by Shaheen Sehbai and Co are lost therefore please note the dates of the story and read every word in the links. Jang Group of Newspapers, GEO TV, Salim Safi, Shaheen Sehbai, Rauf Klasra and Ansar Abbasi should be ashamed of themselves because it was the Jang Group of Newspapers which statrted giving undue attention to Brigadier (R) Imtiaz since July 2009. Jang Group of Newspapers, GEO TV, Salim Safi, Shaheen Sehbai, Kamran Khan,Rauf Klasra (now in Express News Group) and Ansar Abbasi should be called the "Anti Democracy Secret Cell in the Journalist Community" to tarnish the very image of Journalism and Press Freedom, now go through the coverage "Brigadier Imtiaz received" in the GEO TV and then watch the Interview which should be called interview conducted by Express News.

Mr. Hamid Mir says that he was the first Pakistani Journalist:) who met Osama Bin Laden, I wonder who was Late. Eqbal Ahmed (Senior Columnist of Daily Dawn) who met Osama Bin Laden in mid 1980s: Reference: Terrorism, Theirs & Ours by Late. Eqbal Ahmad (1933/34 - 1999)  http://chagataikhan.blogspot.com/2011/05/terrorism-theirs-ours-by-late-eqbal.html