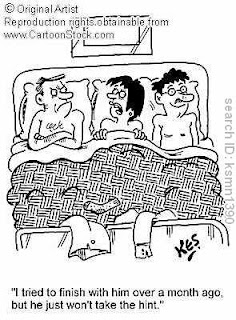 KABEERWALA: President Jamiat-e-Ulema Islam (Samiul Haq faction) Maulana Samiul Haq while utilising the Difa-e-Pakistan Council platform, said on Tuesday that Pakistan Tehreek-i-Insaf (PTI) chief Imran Khan did not want to anger US just so that he could gain power in the country. He was talking to media after meeting party officials in Kabeerwaala. Haq said his party did not want alterations or modifications in the current political system, but a complete change of the system. The JUI-S president, reacting to the PTI Chief’s decision not to attend the Difa-e-Pakistan Council, said that while the Council had no political destiny, Imran Khan did. He alleged that the former cricketer, unlike them, sought power. The JUI-S president said that Khan had been trying to put PTI on both boats of religious groups and the US. Those boats are on completely different and divergent paths, Haq said. He warned Khan that he would not be able to use religious groups for coming to power and have US support at the same time. Haq said that he and his party harboured hatred against the prevailing political system of Pakistan. Though, at the same time, he maintained that his party had no interests in politics, only the enforcement of an Islamic system. He claimed that they had public support to overthrow the current American system. He claimed that millions of people had attended their conventions all over the Pakistan under the umbrella of Difa-e-Pakistan, and that this was clear evidence that people of Pakistan too did not want a political system ruled by US. “Our gatherings are a clear message to US and it is a referendum for the government of Pakistan to immediately reconsider relations and foreign policy for US and its allies,” Haq said. Religious parties united under the Difa-e-Pakistan umbrella were sufficient to counter the strategies of US and make the US and its allies run away from the region including Afghanistan and other Muslim countries. He said that the image was wrong that US, India or Israel was afraid of Pakistan’s atomic capacity. In fact, Haq claimed, they were afraid of religious madarsahs, mosques, beards and turbans. “Let them be afraid from these realities of our ideology and foundation,” the JUI-S chief said. REFERENCE: Imran Khan catering to religious parties just to gain power: JUI-S By Owais Jafri Published: February 1, 2012 http://tribune.com.pk/story/330216/imran-khan-catering-to-religious-parties-just-to-gain-power-jui-s/
Difa-e-Pakistan/JUD Death Threat to Pakistani Media (Capital Talk - 13th Feb 2012) 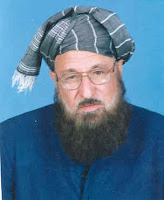 Hatred is a powerful motivator. Until the clerics made common cause against America, the six hard-line party leaders were rivals. They stormed each other's mosques and split hairs over ideological disputes dating back to Islam's early days. Their differences were stark: some worship at the tombs of local Sufi saints; others dismiss that practice as blasphemy. Most of the parties want their women veiled from head to toe, although more liberal groups argue that it ought to be the woman's choice. The personalities of the parties' leaders have also clashed. Qazi Hussain Ahmed from the Jamaat-e-Islami is a cultured, well-traveled cleric who speaks with the measured finality of a judge passing a grim sentence. Several of his new brethren, in contrast, are unquestionably flamboyant. Maulana Fazlur Rehman wears robes of golden thread and was dubbed "Maulana Diesel" after allegations were made�though never proven�that he was involved in a fuel scam. Maulana Samiul Haq earned the nickname "Sandwich Sammy" after being photographed (presumably by Pakistani intelligence officers) in an inventive position with several bedmates. "We have our differences, some of them centuries-old," concedes Ahmed, "But we have enough in common." REFERENCE: General's Election By Tim McGirk / khana-khel Monday, Oct. 07, 2002 http://www.time.com/time/magazine/article/0,9171,361788,00.html?iid=chix-sphere 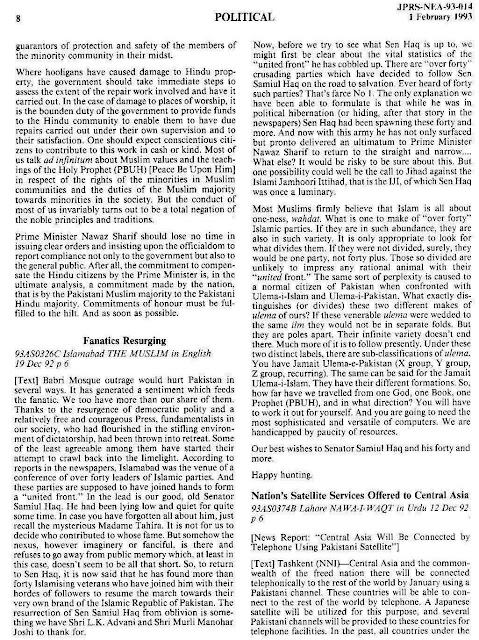 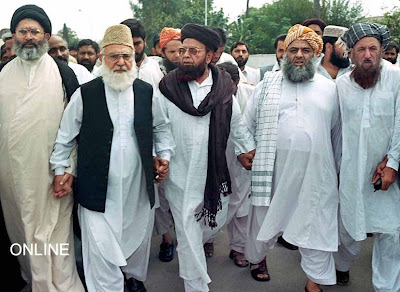 AKORA KHATTAK: Located at Akora Khattak on the main Grand Trunk (GT) road between Rawalpindi and Peshawar, the Jama Darul Uloom Haqqania is regional centre of religious instruction and has been a source of both inspiration and muscle for the Taliban government in Afghanistan. The institution has been the ideological training ground for several hundred Afghan Talibs (students), who have gone on to join the ranks of the Taliban militia in Afghanistan. The Afghan border lies a five-hour drive via Peshawar, the capital of the Frontier province and an important way station for Afghanistan. The institution, which comprises primary and secondary schools and a seminary where hundreds of students study and live, is headed by Maulana Sami-ul Haq, a former senator and religious figure in his own right. In a hall, the Maulana holds court, he is busy lamenting with some of his subordinates over why his institution has to pay electricity charges when it is working in the cause of Islam. "In a Muslim country like Pakistan, our institutions should be exempt," he says to no one in particular. Sami-ul Haq has gradually withdrawn from public life and engrossed himself more in his work at the madarssas and towards what he calls, the "glorious spread of Islam." The bearded Sami-ul Haq, nearing 70, has been a bitter critic of Prime Minister Nawaz Sharif ever since the two parted ways in the early 90s. This parting resulted in the now infamous media cell of Sharif PMDN party publicising the interviews of a certain Madam Tahira, who is supposed to have kept a house of pleasure in Islamabad and whose clients included the rich and famous. In her interviews, Madam Tahira talked about Maulana Sami-ul Haq and certain "positions" he favoured. The media lapped it up and had a ball. Even today some papers refer to Sami-ul Haq as "Sammy Sandwich" in reference to those interviews. While Sharif managed to get Sami-ul Haq off centre stage politics in Pakistan, he may have helped propel the maulana's energies in working towards a "true Islamic revolution in Pakistan," in the words of the maulana. At his institution in Akora Khatak he trains young men wo go forth and propagate the supremacy of the Quran. "There is no other way," says Sami-ul Haq, adding "unless we have supremacy of the Quran, we cannot thrive as a nation." But the maulana isn't impressed with the efforts of Nawaz Sharif towards Islamisation. Commenting on the proposed Shariat Bill, Sami-ul Haq says that it is "only a lollipop". He says that politicians in Pakistan "take refuge in religion when there are other problems at hand." Turning his attention to Afghanistan, he says that the Taliban are not the bad people they have been made out to be. "Look at the violence that was prevailing because of the in-fighting of the so-called Mujahideen. Nobody was safe. Now things have changed for the better," he says. He says Pakistani politicians have used the Taliban card to gain sympathies for themselves from the West: "Benazir Bhutto tries to sell herself as a moderating force. But she is a compulsive liar and a thief." If there is any development that Maulana Sami-ul Haq welcomes in the past year in Pakistan, it is the detonation of a nuclear device. "We have proved our manhood to Mother India," he says with a hint of sarcasm. But he warns that the Pakistani bomb is in the wrong hands; according to him. Prime Minister Nawaz Sharif will sell out to America. A tour of his institution reveals a wide array of classrooms, prayer areas, dormitories and exercise grounds. There is even the office of a magazine which the institution publishes and a library. Most interesting was block for central Asian students. Buried in one courtyard is Maulana Abdul Haq, the founder of the institution and father of Maulana Sai-ul Haq, who came to Akora Khattak from Deoband to establish this centre for religious instruction in 1972. When asked whether he sees an Islamic revolution taking place in Pakistan. Sami-ul Haq predicts: "In the next few years." He argues that things have got so bad and people are so frustrated with their leaders that Islam is the only force that they can turn to. And as an afterthought, the maulana says: "And it is here at places like the Dar-ul Uloom that we will provide the next generation of leaders, like we have done for Afghanistan. Here we give out puppets the ultimate weapon - the power of the Islamic knowledge. REFERENCE: In 'Sammy Sandwich' Country, They Get Ready for Islamic Revolution Express visits training school for Taliban, headed by Maulana Sami-ul Haq who disappeared from Centrestage after sex scandals. 7th February 1999 The Indian Express By: Kamal Siddiqi http://www.jammu-kashmir.com/archives/archives1999/99february7.html
US AID for Jamat-e-Islami & GO AMERICA GO of Jamat-e-Islami. 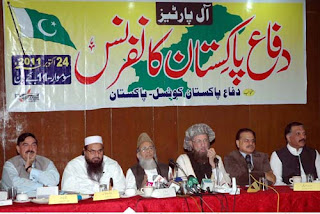 MULTAN (February 16 2005): Farooq Maudoodi son of founder of Jamaat-i-Islami, late Abul Aala Maudoodi, has said that Muttahida Majlis-i-Amal (MMA) had been created by ISI and it is a part and parcel of the military government and cannot part ways with President Pervez Musharraf. Talking to a group of journalists here on Tuesday he said: "Qazi Hussain Ahmed met the then ISI chief, General Ehsan-ul-Haq, then called on General Pervez Musharraf and later met US ambassador, then flew to United States. As soon as he returned, MMA was formed like IJI (Islami jamhoori Ittehad)." He said that IJI was organised by ISI and funds were also provided by it on the assurance of Qazi Hussain Ahmed, who had also played a key role in IJI. "Now he is playing major role in MMA." Bitterly criticising the MMA, Farooq said that the role of MMA is evidence of its loyalties with military regime. It had approved the 17th constitutional amendment which is in favour of the present regime. He said: "Where has the MMA movement gone while its leadership is claiming that it would continue till the achievement of objective of 'Uniform'?" Farooq said that Benazir knew very well about MMA and she had some reservations about it. He said that ISI has complete record of MMA leaders and they cannot escape. He said that politics ended in 1958 when Ayub imposed martial law. He said that plundering of evacuee trust property (Auqaf) and politics of clerics destroyed the politics of the country. Regarding deletion of column of 'religion' from Passport, he said that it was a good step and Ulema should have welcomed it but they made it part of their agitation to hoodwink the innocent Muslims.Farooq said that some bad things were added in the constitution by Zia-ul-Haq, which must be excluded, which had bred many ills. ends 'MMA was created by ISI' RECORDER REPORT [Courtesy Business Recorder 2005] http://www.brecorder.com/index.php?id=198267&currPageNo=12&query=jamhoori&search=1&term=2004-10-012006-12-31&supDate=
Sheikh Rashid Like Wild Women. 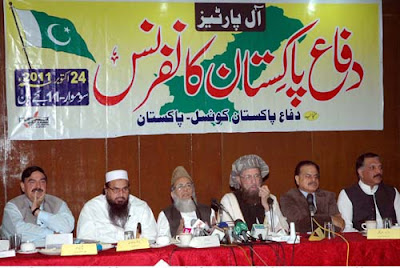 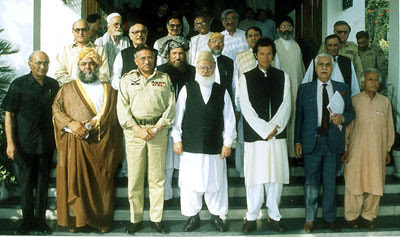