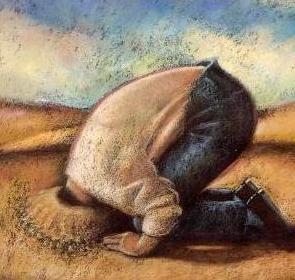 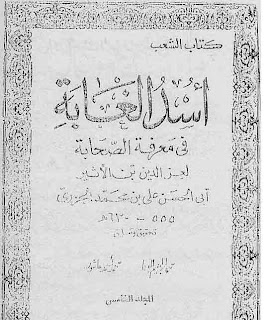 I have Sahih Bukhari and Usd al-ghābah fi ma‘rifat al-ṣaḥābah by Ibn al-Athīr [Biographies of 8, 000 Companions of the Prophet Mohammad (PBUH)] and nothing is mentioned about Companion Hamzah (May Allah be pleased with him)'s son, it would be pertinent to mention here that Prophet Mohammad (PBUH) and Hamzah (May Allah be pleased with him) were almost of the same age. Baloch are basically Kurds. What happened in Pakistan is that generally people want to see everything through the prism of scripture and when they cannot attain desired result then they invent fiction to soothe themselves and that's what happened in the above Thesis which is discussed by Zaidi Sahab. For example political history on many places praised Hajjaj Bin Yousuf and even some Secular historian as well and similarly Hajjaj is condemned in an Hadith of Tirmidhi Sharif "Imam Tirmidhi has reported a Hadith condemning Hajjaj as Mabeer "Slayer" and Mukhtar (Shia) as Kazzab" - Imam Zahbi (followed by Wahabis), and Gentleman Caliph "Omar Bin Abdul Aziz - have both vehemently condemned Hajjaj Bin Yousuf saying if the whole world bring in their worst and we would only bring only Hajjaj then Hajjaj would overpower every rogue of the world. The word Omar Bin Abdul Aziz used was "Khabees" - For Further Reading: Tabaqat Ibn Saad, Tabari, Al Bidaya Wal Nihaya.


Ashraf-us-Sawaneh
Quote 1: Ashraf-us-Sawaneh vol.1, p.12 - A strange incident is mentioned in Ashrafus-Sawaneh (biography of Ashraf Ali Thanvi) about the great-grandfather of Ashraf Ali Thanvi, Muhammad Fareed. He was accompanying a marriage procession when it was attacked by a band of thieves. Muhammad Fareed died defending the procession and was buried near the tomb of Pir Samauddin. An Urs (festival) was held at his grave for many years. The biographer writes, “After his martyrdom a strange incident occurred. At night, he returned to his home as if he was alive and gave some sweets to his family members saying, ‘If you do not tell (about my visit) to anyone, I shall keep coming this way.’ But the family members feared that the people may suspect something wrong when they see the children eating sweets, so they disclosed the incident and after this he did not return
Quote 2: Ashraf-us-Sawaneh vol.1, p.16 & 17- “The story of Hazrat’s (Ashraf Ali Thanvi) birth ... ‘They (the children) die in the fight between Umar (radhi allahu anhu) and Ali (radhi allahu anhu). Give it in the protection of Ali (radhi allahu anhu), he will remain alive.’” ... “the father is from the lineage of Farooqui (i.e. from the descendants of Umar Ibn Khattab (radhi allahu anhu)) and the mother is from the lineage of Alawi (i.e. from the descendants of Ali (radhi allahu anhu)); and up to now the name (of the child) was given upon the name of the father, like Fazl-e-Haqq. This time the son that is born should be named in accordance with the mother’s family and the name should end with Ali.’ ... REFERENCE: Scanned Images of Quotes from the books of the Deobandis http://www.ahya.org/tjonline/quotes/index.html 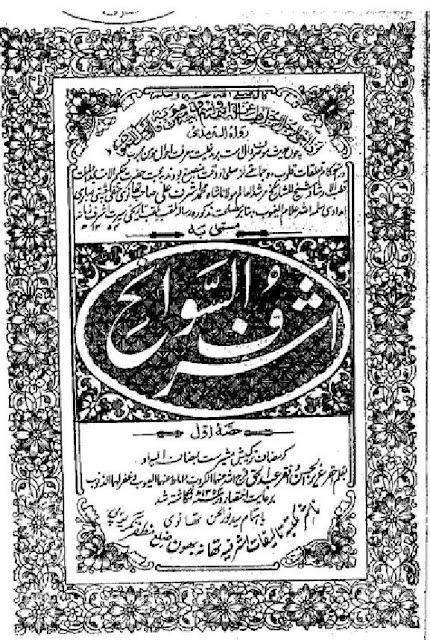 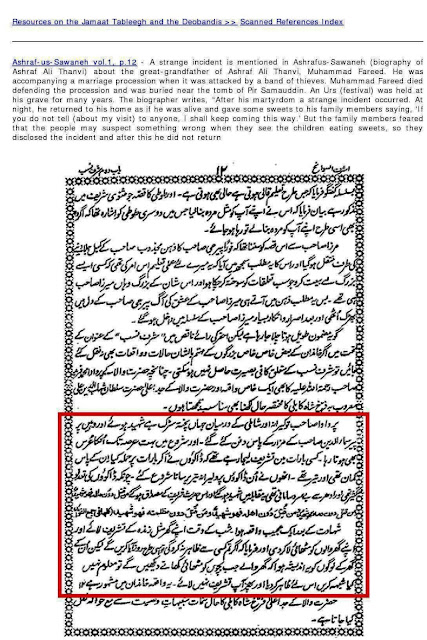 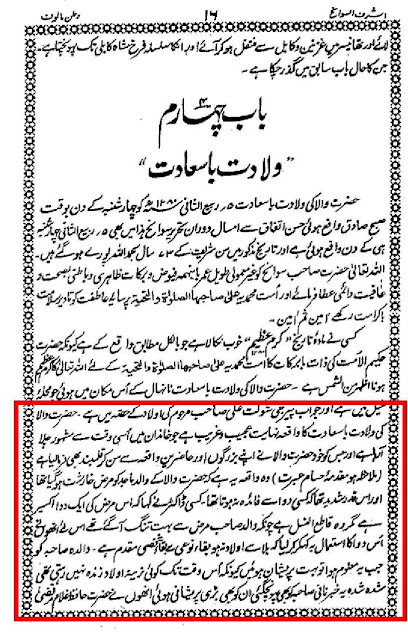 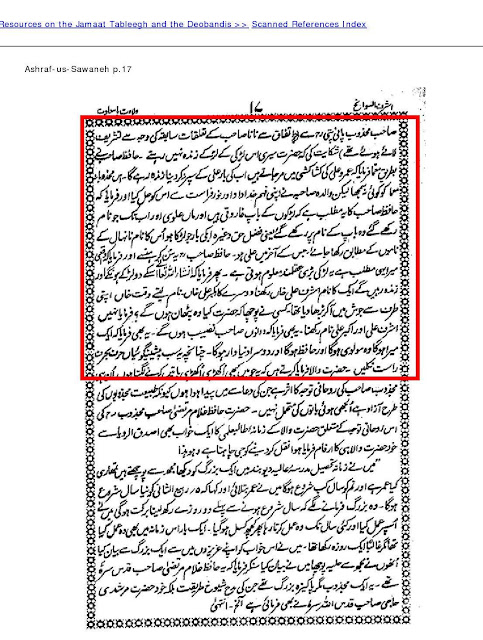