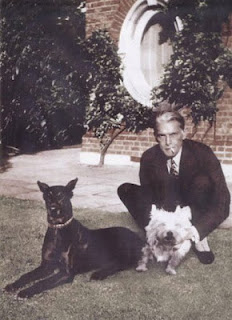 
Declare the Quran and Sunnah to be the constitution and nominate a body of ‘pious’ Muslims to interpret it.
Declare that all state functionaries, including judges, must strictly follow government directives whether they consider them to be right or wrong.
Dissolve the provinces as being contrary to the concept of Millat.
Abolish Parliament, or just the senate, and nominate a Shoora of ‘pious’ Muslims.
Declare opposition to be un-Islamic, hence banned.
Declare that public offices be restricted to ‘pious’ Muslims.
Declare restrictions on the rights of women, thus banning them from holding public office (bye-bye BB).
Declare any sect of Muslims to be non-Muslim and thus minorities.
Declare that minorities have no rights other than the practice of their religion, of their personal laws, traditions and customs, thus depriving them of their right to vote and other fundamental rights. Subject them to payment of Jazya.
Introduce flogging, amputation, lapidation, the death penalty, and public executions for various major and minor offences.
prohibit western education and declare Islamic education to be compulsory.
Restrict communications with the outside world, such as the Taliban -style banning of television.
Declare interest to be haram and thus not payable on international debts.
All this will be done in the name of a good religion as interpreted at Raiwind.


Quote 1: Malfoozat Hakeem ul-Ummat, vol.1, p.244 - Moulana Ashraf Ali Thanvi says about his Pir (spiritual guide), “Haji Sahib (Haji Imdadullah Muhajir Makki) was greatly over-powered by Tawheed (of Existence)… As for Wahdat al-Wajood, it seemed as if he was an eyewitness to it. ... “A question may be raised from the first part of this verse that since there is none other than Allah, (then) what are these Hawatith? The answer is thus, (as in the next part of the verse), ‘Lahul Asma al-Husna’ meaning that all are the Madhahar (manifestations) of Him (Allah) ... However, expressing such sayings or relating them is not for everyone.”
Quote 2: Malfoozat Hakeem ul-Ummat, vol.1, p.251 - Ashraf Ali Thanvi says: “You are amazed at people who claim Prophet-hood… People have claimed Lordship. However, nobody must think that Hussain bin Mansoor (al-Hallaj) in his saying, ‘Aanal-Haqq’ [I am the Haqq (Truth meaning Allah)] claimed Lordship (i.e. claimed to be God). Because upon him was a condition, otherwise he also believed in Abdiyaah (the state of being a worshiper) and therefore he offered Salaah. Someone asked him (al-Hallaj): “Since you are Allah, to whom do you prostrate?” He (al-Hallaj) answered: “I have two states, one outward and the other inward. My outward self prostrates to my inward self.”
Quote 3: Malfoozat Hakeem ul-Ummat, vol.8, p.37 - “Once he (Moulana Ashraf Ali Thanvi) said, that when we die and go to Jannah, and the Hoorein will come to us, we will ask them to either recite the Qur’aan to us or do their work (that is to say that leave me alone).” Once he said, “I was very sick and am very afraid of dying. I saw Hazrat Fatima (the daughter of Allah’s Messenger) in a dream and she embraced me in her arms and I got well.”
Quote 4: Malfoozat Hakeem ul-Ummat, vol.8, p.37 - “Once some one came to Ashraf Ali Thanvi and said, “The issue of Mafqood al-Khabr (missing husband) next to Imam Sahib (Imam Abu Haneefah) is a big problem (difficult).” He retorted saying, “Yes, there is a big problem. And the issue of Jihad mentioned in the Qur’aan has greater difficulty. So, remove this too from the Qur’aan.” REFERENCE: Quotes from the books of the Deobandis http://www.ahya.org/tjonline/quotes/index.html 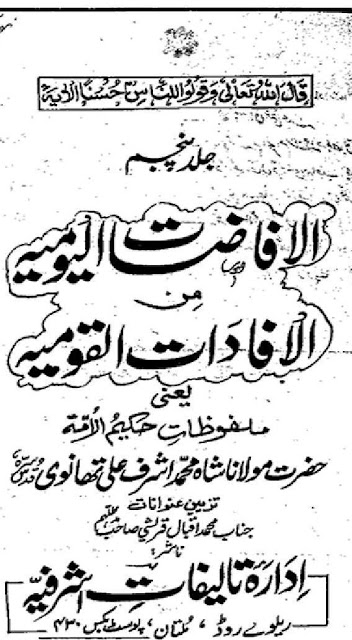 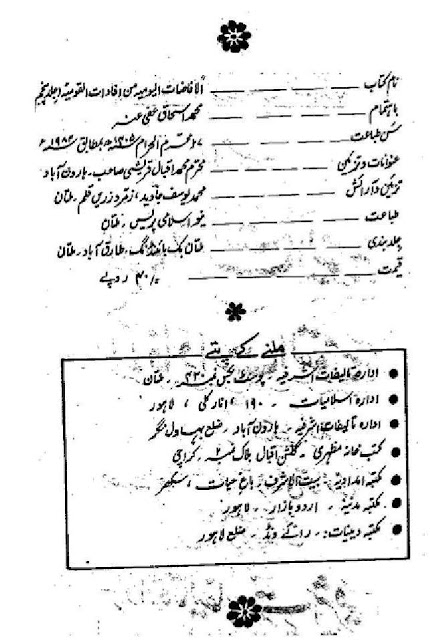 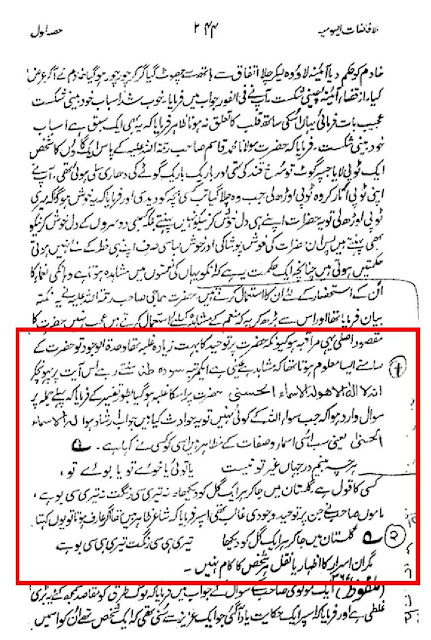 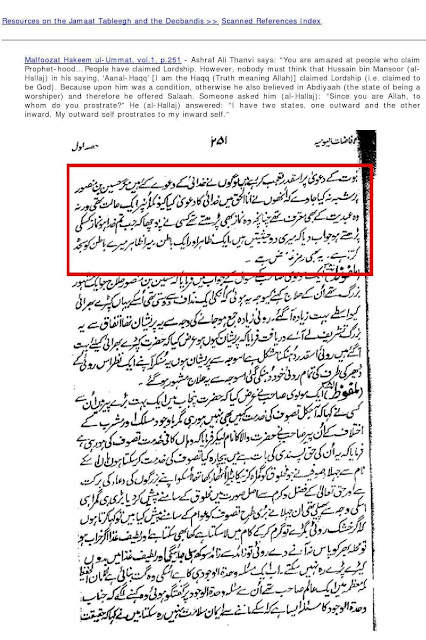 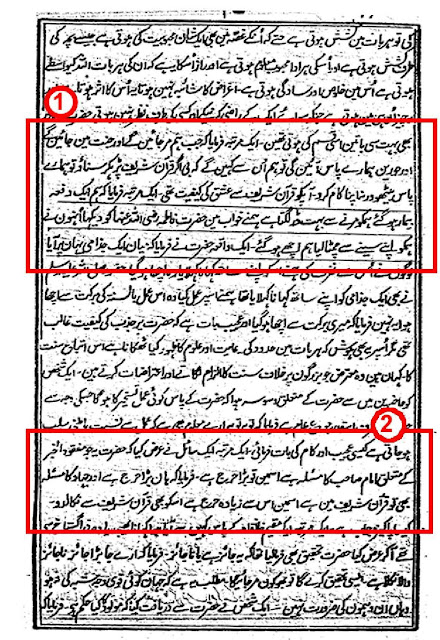