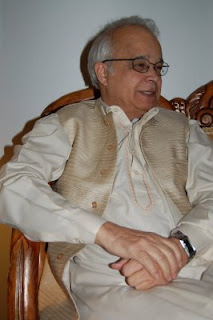 Nayyar Zaidi aka Syed Haider Karar Zaidi [Nayyar Zaidi used to write for Jang/The News International and Akhbar-e-Jahan [Weekly Magazine] but look what is heppening right under the nose of the so-called Snow White and Beacon for Press Freedom i.e. GEO TV and Jang Group of Newspapers.

He is an honorable gentleman. I met with him in Florida about 10 years ago and found him to be a man of integrity and knowledge. His health was brittle even at that time. He always preached that Muslims should integrate themselves with the American society and be a part of the American political system.

You would have noticed that subject of the post is "GEO TV's" Correspondent and if the above news about Nayyar Zaidi [GEO's Correspondent for the US] is a 'slander' then what about this slander of GEO TV due to which innocent men lost their lives. 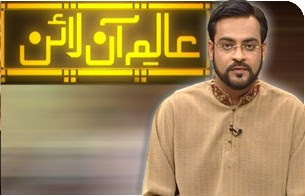 Dr. Aamir Liaquat Hussain of Aalim Online [a TV Program of Geo TV] Hussain Cursing the Companions of Prophet Mohammad [PBUH]'s Companions [May Allah be pleased with them]
http://forum.kalpoint.com/islamic-forums/68545-amir-liaquat-hussain-cursing-sahaba-radhi-allah-anhu.html

Dr. Aamir Liaquat Hussain of Aalim Online [a TV Program of Geo TV] has repeatedly incited several times, urging Lunatic Muslims [even in the Mullah State the authority to punish anybody rests with the State not with the individuals] to kill without fear. While on air the anchor person also pressured the other two Islamic scholars (from two different sects) on the program to support the statement. This resulted in a unanimous decision among the scholars, on air during a popular television show, to urge lynching with the intent to kill.

GEO TV raise hue and cry over almost everything whereas their very own key "Religious Scholar - Mr. Aamir Liaquat Hussain" is indulged in “Tabbarra Against the Companions of Prophet Mohammad (PBUH)” (Insulting Comments against the Companions of Prophet Mohammad - PBUH). Had Daily Jang quoted Quran and Hadith on Beard then it wouldn’t have been a problem but lecture on Islam from a TV Anchor who doesn’t even know about the “Status” of Companions [Sahaba Kiram] would not be acceptable to any sane person. Watch and lament.

The Asian Human Rights Commission (AHRC) has received information that an anchor person working for a prominent television channel has incited Muslims in Pakistan to kill - to devastating effect. The targets are followers of the Muslim Ahmadi sect, a group which has been declared non-Islamic under the constitution of Pakistan. The first killing happened within 24 hours of the broadcast, and just under two days later a district chief of the Ahmadi was murdered. Followers of the religion are understandably frightened, and many have left their homes and are taking shelter at their central mosque, the Rabwa.

In a program aired on 7 September 2008 the anchor of the religious program 'Alam Online', Dr. Amir Liaquat Hussain--also former federal minister for religious affairs--declared the murder of Ahmadi sect members to be necessary (Wajib ul Qatal) according to Islamic teachings, because its followers don't believe in the last prophet, Mohammad, peace be upon him. Dr. Amir repeated his instruction several times, urging fundamentalists Muslims to kill without fear.

While on air the anchor person also pressured the other two Islamic scholars (from two different sects) on the program to support the statement. This resulted in a unanimous decision among the scholars, on air during a popular television show, to urge lynching with the intent to kill. This was not a one-off. On September 9, Mr. Hussain answered a query with the comment that blasphemers are liable to be put to death.

According to the information received, at 1:15pm on September 8, 18 hours after the broadcast, six persons entered the Fazle Umer Clinic, a two-story hospital at Mirpur Khas city and two of them went to the second floor and started pressuring 45 year-old Dr. Abdul Manan Siddiqui to come downstairs to attend to a patient in crisis. Dr. Manan left his office and descended into an ambush. He was shot 11 times and died on the spot. His private guard was also shot and is in a serious condition. A woman was also injured by firing. The killers remained at the hospital until the doctor was declared dead, then they walked out of the building's front entrance. Police registered the killers as unknown.

On September 9, 48 hours after the broadcast, Mr. Yousaf, a 75 year-old rice trader and district chief of the Ahmadi sect was killed on his way to prayer in Nawab Shah, Sindh province. Yousaf was fired on from people on motor bikes, and sustained three bullet wounds. He died on the way to the hospital. The assailants had taken a route past a police station. No one was arrested.

The Ahmadi sect was declared non-Islamic sect on September 7, 1974, through a constitutional amendment, and was labeled a minority sect. Since then, there has been open hatred of the sect by certain Islamic circles and fundamentalists across the Muslim world, and sect members suffer widespread discrimination. Ahmadi followers are not allowed to bury their dead in the ordinary grave yards of Muslims, and many of those buried before 1974 were shifted by fundamentalists.

Since 1984 (when statistics have been compiled) around 93 Ahmadis have been killed for their allegiance to their sect, with four killed so far this year, including Dr. Ghulam Sarwar on March 19 in Faisalabad, Punjab province and Mr. Basharat Mughal on February 24 in Karachi. The Dr. Siddiqui is the 15th medical doctor killed since 1984.

Please write to following authorities and urge them to appropriate actions in order to stop the killings of Ahmadi followers and recognized religious freedom. Please also demand them to prevent any religious hatred or discrimination from broadcasting through the media.

Please be informed that the AHRC has also written separate letter to the UN Special Rapporteur on freedom of religion or belief.
Posted by Aamir Mughal at 12:54 PM