These dazed and confused Political Mullahs have no idea of International Politics, International Relations and Trade Relations when they miserably try to defend Pakistan and Pakistan's National Interest through Islamic Lense. Please go through the public statements issued by two Chiefs of Jamat-e-Islami and then read the details about Saudi-India Diplomatic and Trade Relations while keeping in mind the Rampant and Deviant Statements of Jamat-e-Islami Chiefs on Diplomatic Relations with Non-Muslim States. 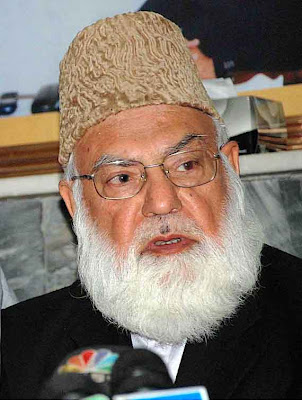 Qazi sees international conspiracy against nuclear Pakistan GEO TV Updated at: 1719 PST, Sunday, May 10, 2009 http://www.geo.tv/5-10-2009/41789.htm SIALKOT: Jamaat-e-Islami (JI) former Amir Qazi Hussain Ahmed on Sunday said that international conspiracies were being hatched against Pakistan due to its nuclear capability. Addressing a news conference here, he said that United States, Israel and India were behind these conspiracies against nuclear Pakistan. He regretted that Pakistan is an ally of non-Muslim states instead of Muslim nations. Ahmed underscored that the country needed to end its alliance with the U.S. to resolve all of its problems. Former JI Amir further said that “The United States wants to see Indian dominance in this part of the world.” 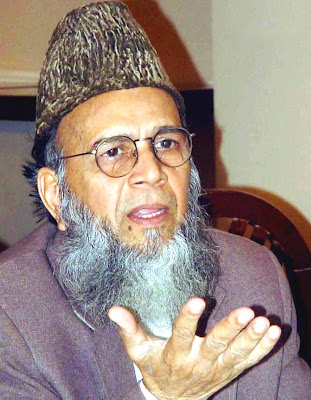 The JI Ameer stated this while addressing a large rally of party activists on The Mall on Sunday [Military action may lead to martial law, says Munawwar By Our Correspondent LAHORE Monday, May 11, 2009 - The News International http://thenews.jang.com.pk/daily_detail.asp?id=176929] Speaking on the occasion, the JI Ameer said Pakistan at the moment was facing three enemies in form of US, Israel and India which were the centre of evils. Terming India a state full of conflicts, Munawwar said “India was the name of contradiction and conflict.” The JI Ameer stressed that focus should be made on the eastern border of the countries and a strict check must be kept on the evil designs of India. “Our army should concentrate on the eastern borders of the country”, said the JI Ameer. 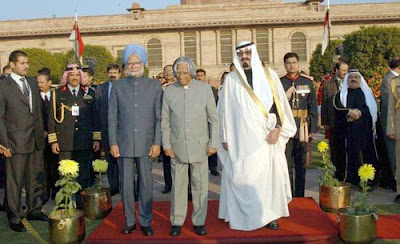 Custodian of the Two Holy Mosques King Abdullah bin Abdulaziz is currently on a state visit to India, the first such visit by a Saudi king in more than 50 years. The visit aims to expand energy cooperation and trade relations with India, one of Asia’s fastest growing economies. Indian Prime Minister Manmohan Singh broke protocol by personally receiving King Abdullah at the airport January 22, a sign of how much importance India attaches to the royal visit, the Arab News reported. King Abdullah was also the guest of honor at India’s Republic Day celebrations in New Delhi today. King Abdullah and the Prime Minister held official talks yesterday after a ceremonial reception at the presidential palace, which included a 21-gun salute. 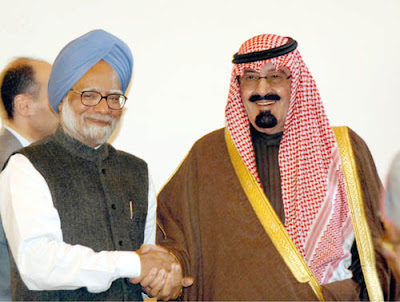 The talks focused on long-term security cooperation, including fighting terrorism, international crime and energy security. The two nations signed a number of agreements, including a Memorandum of Understanding on fighting terrorism, an accord to avoid double-taxation, and a convention to promote bilateral investment. Following their meeting, King Abdullah and the Prime Minister opened a Saudi business exhibition, where Saudi and Indian businessmen signed 10 economic agreements. Yesterday evening, King Abdullah met with Indian President A.P.J. Abdul Kalam at the presidential palace in New Delhi. In remarks, the King offered his thanks for the warm reception, and expressed optimism that his visit to India would be a vital step towards closer cooperation between the two nations. “India’s economic growth has attracted world attention. We are happy that the Kingdom of Saudi Arabia will be one of India's major trade partners,” King Abdullah said. “Moreover, the Kingdom is also happy to host more than 1.5 million Indians who are contributing to the progress, development and prosperity of the two countries.” 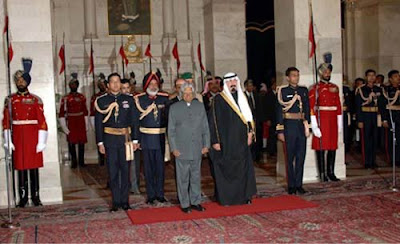 King Abdullah also expressed the hope that India would continue its supporting international efforts to achieve a fair and comprehensive resolution to the Israeli-Palestinian conflict. Speaking to Saudi reporters in New Delhi Monday, Indian Minister of State for External Affairs E. Ahamed described King Abdullah’s visit as “important and historic.” He said India attached great importance to the visit, which would further strengthen longstanding relations between India and Saudi Arabia, the Arab News reported. 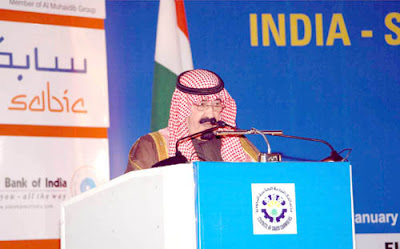 Oil Minister Mani Shankar Aiyar said that India would extend an offer to Saudi Aramco to collaborate on a Hindustan Petroleum refinery project in Visakhapatnam in India’s southern Andhra Pradesh region. Aiyar also said he hopes to discuss bilateral issues with Saudi Oil Minister Ali Al-Naimi, who is part of King Abdullah’s delegation. “The issue of hydrocarbon cooperation is also a component of bilateral talks that are going to be held between Prime Minister Manmohan Singh and the Saudi king,” Aiyar said, as quoted in the Arab News. “So far as the oil component of our energy security is concerned, we have a strong assurance from Saudi Arabia that any incremental requirement will be met by them,” he said. Aiyar also said that a 26 percent dependence on Saudi Arabia is optimal and that now there is a need to diversify oil sources. Saudi Arabia accounts for nearly a quarter of India’s total oil imports, which amount to around 1.9 million barrels per day. 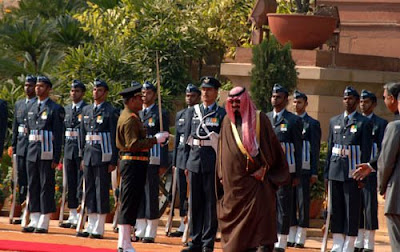 In an interview with India’s NDTV channel over the weekend, King Abdullah discussed bilateral relations between the two countries, as well as a number of regional and international issues of common interest, including energy and terrorism. The King underscored the friendly relations between Saudi Arabia and India, and said that he hopes India and Pakistan resolve their differences peacefully. Everything can be achieved through dialogue, he said. He also said he believes India can play a role in the Organization of the Islamic Conference, possibly as an observer, like Russia. On oil, King Abdullah said that Saudi Arabia has the capability to meet the petroleum needs of India and other countries. He remarked that the Kingdom prefers lower oil prices because higher prices are not in the interest of developing countries. In the interview, King Abdullah also said that Saudi Arabia’s friendly relations with China and India would not affect its good relations with the United States, which has been a friend of the Kingdom for over 60 years. In addition, he stressed Saudi Arabia’s staunch opposition to terrorism.

NEW DELHI, Jan 22: King Abdullah of Saudi Arabia has expressed the hope that Pakistan would sponsor India’s membership as an observer of the OIC even as he called on the two countries to resolve their differences. In a rare interview to India’s NDTV news channel King Abdullah did not name Kashmir as the dispute but left no doubt that he was seriously concerned about the issue. “I do believe that India can play a role in such an organisation, just like Russia does. Russia has an observer status in the Organisation of Islamic Conference and I believe that it will be very beneficial if the application of India could be put forth by a country such as Pakistan,” said the king.

Asked whether his country’s ties with Pakistan had impeded relations with India, the monarch said: “You are correct. The issue of Pakistan has had an impact on Saudi-India relations. I believe that the conflict that exists, the complication that exists, do not help the image of either country.” He said Pakistan is a “brotherly country and friendly country with which we have great ties.”

On the other hand, he said, India is a friendly country with which the kingdom has historic ties. “There is no doubt that the relationship of Saudi Arabia with Pakistan is a great relationship.”

He said Saudi Arabia was not funding terrorism directly or indirectly against India or any other country through its funds in Pakistan.

About his present visit to China, he said ties with China and India were not to come about at the expense of the United States its old ally and solid friend.

Hinting at a deeper partnership with India, King Abdullah admitted that current oil prices were too high and thus hurting developing countries. He said Saudi Arabia had the ability to meet any requirement that India may have for its energy security.

“We want to strengthen the link between India and Saudi Arabia with regards to energy and the ability to provide energy to India over the long term. From our perspective I personally feel that the current price of oil is too high.

“The price is damaging to developing countries who subsequently have to suffer. The price needs to be at a more moderate level. With regards to the export of crude oil to India, we would like to provide India’s requirement of energy in the future,” he said.

He also said he would like to move ahead with reforms in all areas, such as women’s rights. But he felt his country needed to be ready for this.

The king will arrive in New Delhi on Jan 24 and will be the chief guest at the Republic Day celebrations.
===

The tables given below indicate the year-wise figures of foreign Investment approved with Saudi Arabian companies since 1991.

The Industry-wise break-up of foreign direct investment and technical collaboration approved for Saudi Arabian companies during 01.08.1991 to 30.11.2004 is at Annex. I.

Trade between India and Kingdom of Saudi Arabia

List of Saudi Companies/ Government Departments participated in the