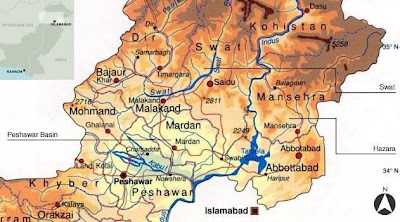 
North West Frontier of Pakistan faces an unprecedented humanitarian crisis as more than 1,200,000 displaced people flee the mountain districts of Swat, Buner, Shangla and Lower Dir as the war between insurgents and the government of Pakistan intensifies. As the army has moved into these to initiate military action to evict the area from the insurgents, the people of these areas are leaving their homes behind in hundreds to safer sanctuaries in other parts of the province. The displaced people are leaving in a hurry carrying barely anything from their homes to help them through this tribulation.

About 10% of these are being accommodated in camps established by the government at fourteen locations. Another 90% are finding refuge with social networks of families, tribes, clans, schools etc. in districts far removed from their homes. The main districts where the pressure is falling are those of Mardan, Swabi, Malakand, Nowshera, Upper and Lower Dir, Peshawar, Charsadda.

1. Shogo Naka-Shergarh on Malakand-Mardan road in District Mardan (for Influx from Swat, Buner and Upper Dir)


2. Jlala on Swat-Mardan Road-had a massive influx on 10th May 2009 (for Influx from Swat, Buner and Upper Dir)

These TFCs are providing the following services:

* Free transport facility for IDPs to their destinations in host communities, Camps or 13 schools designated by commissioner Mardan for IDPs.


* Information Provision to the IDPs regarding;

1. Registration points established in each district for them,

5. Information regarding the designated 13 Schools used for IDPs shelter


* We are also collecting information from the IDPs at these TFCs who are availing services for future programmes to support them after transition.

There are four large camps with capacity to accommodate influx from Buner, Dir & Swat are as following:

* Yarhussein Camp in Swabi with a current capacity for 1000 families

* Jalozai Camp in Peshawar with almost 8,000 existing families and its capacity is being enhanced for accommodation of 1500 additional families

SRSP has now been asked as of today by UNHCR to start NFIs distribution in the Yarhussain Camp in Swabi. Teams have been sent in to the camp and NFI distribution would be immediately started from a Rub-hall already installed by UNHCR inside the camp.

* Clothes for women and children

* Food items which are not provided by World Food Programme like Meat, Tea and Vegetables

The commissioner Mardan has ordered all government school to be used as sub camps for IDPs due to heavy influx and insufficient capacity of the camps. These Schools are on Mardan-Swabi Road, Mardan-Malakand Road and Mardan Katlang road. Most of the organization are working either in Camps or very few at reception points leaving behind these schools.

Currently the needs in the Government designated schools for IDPs in Mardan are as followed:

* Bedding (schools doesn’t provide proper beddings for the IDPs and the IDPs are demanding mattresses, blankets and Chitais especially for children, women and sick)

* Cleanings (to avoid epidemics and stay clean the communities need a pair of Buckets, mug, soap and towels)

* Ambulance (standby ambulances for emergencies one ambulance per school)

* Communication (IDPs have no communication systems so far to communicate among themselves or back at home, temporary telephone booths to be established in the schools to avoid panic)

Apart from these Reception points SRSP and UNHCR has immediately established one Humanitarian Response Centre in Mardan to facilitate all the donors, philanthropists, charities etc. This Humanitarian Response center would be based at the Extended Distribution Point (EDP) Senge Marmar Kali on Swabi-Mardan Road and would be supported with a backup warehouse on Nowshera-Mardan Road opposite Khishko Chungi.

To ensure Transparency, efficiency and effectiveness; adequate staff, labor and transport has been made available at the center. This center would be in the capacity to support the efforts of all the individuals, fund raisers and philanthropists, external organizations by providing them outreach and provide them with adequate information regarding the emerging needs to be addressed.


The Extent of the Calamity

There are many aspects to the unfolding humanitarian crisis. Those noted by us show that on Sunday 10th May 2009: According official sources present at Shugo Naka check point on the Mardan border, it was observed that more than 25,000 vehicles (trucks & Busses) crossed into Mardan loaded with Families & luggage.

The situation got worst after 2 pm when the entire road was declared one way and three lanes of vehicles were pounded into Mardan district till 1am in the morning making it impossible to count them. People travelled for hours on their foot to reach a point to get access to transportation.

People have managed with carts, rickshaws, motorbikes, wagons, cars, buses, trucks, containers or anything they can get hold of.

The transport mafia got active and started exploiting the situation. The camps have reached to their maximum capacity, new camps are being planned but meanwhile, commissioner Mardan has announced all the Schools officially closed and buildings to be used for IDPs as Sub-camps.

THE SCHOOLS NEEDS IMMEDIATE ASSISTANCE as currently only the local people are providing food etc from their charity sources, which would not last for long. Majority of IDPs are moving into host communities in Mardan, Swabi, Charsadda, Nowshera, Peshawar and Malakand.

This just one indicator of the kind of crisis which we face in this province. It will have many other humanitarian aspects emerging in the days ahead. In case you are interested in helping please contact SRSP to reach the suffering people.

For those who want to help, We've compiled a small list of various initiatives that you can help with (all these have not been verified by the Group Admin)

Pakistani Red Crescent: To make a donation or volunteer your time, call your provincial branch. I urge you to visit:

RIPORT, is also providing relief to the IDP camps. They will be going in with a scheme called, Lightening the Darkness, where they are hoping to provide electricity to IDPs. Their initial survey shows large gaps in medicine supply. If you would like to volunteer/donate funds, please call +92(91) 9211-8411

Islamic Relief USA, who provided a lot of earthquake relief and are now currently providing medicine and other essentials to IDPs in and around Peshawar. For people in the United States who would like to help http://www.irw.org/contactus

UNHCR has started an online RELIABLE drive to collect funds, The link is: http://www.unhcr.org/emergency/pakistan/global_landing.html

Ofcourse, there is Edhi Foundation. Muslim Commercial Bank, Aabpara branch, Aabpara, Islamabad. Account No: 5626-2 – A detailed list of the international Edhi Offices is available on the group wall.