The US CIA and Darfur - Sudan Crisis - 2 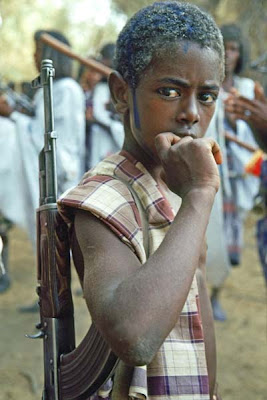 Sudan's Islamist regime, once shunned by Washington for providing a haven for Osama bin Laden as well as for human rights abuses during decades of civil war, has become an ally in the Bush administration's "war on terror". Only months after the US accused Khartoum of carrying out genocide in Darfur, Sudan has become a crucial intelligence asset to the CIA.

In the Middle East and Africa, Sudan's agents have penetrated networks that would not normally be accessible to America, one former US intelligence official told the Guardian. Some of that cooperation has spilled over into the war in Iraq: Sudan is credited with detaining foreign militants on their way to join anti-American fighters there.

Sudanese agents have also helped the CIA to monitor Islamist organisations in Somalia.

"The intelligence relationship is the strongest thread between Washington and Khartoum," the official said. "Khartoum is probably the only government in the Arab League that has contributed in a major way to the protection of US forces and citizens in Iraq."

News of the growing cooperation was first reported in yes terday's Los Angeles Times. The paper traced the thaw in relations since 2001 to a milestone last week: the visit to Washington by Sudan's intelligence chief, Salah Abdallah Gosh. It reported that Sudan's secret police had begun to crack down on suspected Islamists, had shared evidence with the FBI and allowed US personnel to interrogate al-Qaida suspects.

In May 2003, Sudanese security forces raided a suspected terrorist training camp and deported more than a dozen, mainly Saudi, militants to Arab states which work closely with US intelligence services, the newspaper said.

Yet a decade ago Sudan was a haven to Bin Laden and other international outlaws, such as Carlos the Jackal. In 1993, it was placed on the US state department's list of terrorist regimes. Approaches from Khartoum were rebuffed - even as it offered its services against an emerging al-Qaida in the 1990s.

"Sudan tried to hand over two guys implicated in the 1998 bombing of the US embassies in east Africa, and the response was to send cruise missiles to hit the aspirin factory in Khartoum," the official said. "They offered up Bin Laden in 1995, and we said we don't even have an indictment on him."

News of General Gosh's visit to Washington caused consternation in human rights circles. The general is among 51 Sudanese officials implicated in human rights abuses by the international criminal court.

"I quite understand that the war on terrorism means dealing with bad actors, but to fly in one of Sudan's chief committers of what Washington has formally described as genocide is deeply disturbing," said an independent Sudan analyst, Eric Reeves. He noted there had been signs of a slight thaw towards Khartoum for some time - despite the state department's official stance.

It was Woodrow Wilson who called the Armenian Holocaust sad, but necessary to quell an internal security threat.' Today it appears that the Bush administration, only eight months after former Secretary of State Colin Powell announced that Sudan's pro-government militias were committing genocide, has changed its mind and now is once again ignoring victims of genocide and allowing a government to quell a security threat.'

The Los Angeles Times recently reported that the US government and the Sudanese government responsible for over 180,000 deaths are forming a close intelligence partnership, and that government in Khartoum is becoming a surprisingly valuable ally of the CIA' in the war on terrorism, as surprising as that would seem to anyone aware of the fact that Sudan harbored Osama bin Laden and Al Qaeda a decade ago and that Sudan's dictator retained ties with other groups classified as terrorists by the US government after Al Qaeda left Sudan.

The Times' report on the US' new ally shows very clearly the opportunistic nature of the war on terrorism' paradigm, which in reality has nothing to do with stopping violence or promoting peace but is merely a new justification for continuing with the imperialist program that the US has pursued since the Second World War. The article is full of completely contradictory messages from US government officials, and it is difficult to imagine how an establishment reader could make sense of them without resorting to the use of doublespeak. The first few paragraphs explain that Sudan has been charged with committing genocide by the US government, once welcomed bin Laden, and has been described as "an extraordinary threat to the national security" by the Bush Administration.

Paragraphs later, the readership is told that "American intelligence considers [Sudan] to be a friend" by a senior official in the Sudanese government, and that Sudan could become a top tier' ally of the CIA by a State Department official. In addition, the Bush Administration has recently normalized relations with Sudan in light of this recent cooperation.

According to these interviews with US and Sudanese intelligence officials, in recent collaborative efforts partaken by the two governments Sudan has expelled Islamic extremists.' This leads one to wonder, have they banished themselves from the country? Among their other services, they detained Al Qaeda suspects, members of the Iraqi insurgency, and other terrorist operatives and gave them to the US for interrogation. Unfortunately, no members of the Janjaweed, the pro-government militia committing genocide against the civilians of Darfur have been detained or disarmed.

Why has the relationship between Sudan and the US shifted so suddenly, and why is the Sudanese government so interested in helping the US government hunt down extremists that it used to fund and give sanctuary to? Why is the US so ready to normalize its relationship with a country involved in a massive campaign of ethnic cleansing, as the UN calls it, or genocide, as the Colin Powell called it?

Washington's radical reversal of relations with Sudan undoubtedly has quite a bit to do with Sudan's oil, the majority of which it had been selling to China. Washington has been looking for a way to gain control over Sudan's oil fields for a long period of time. It is likely that the US helped train the two largest rebel groups whose attacks elicited the government's counter-insurgency campaign, the Justice and Equality Movement and the Sudanese Liberation Army, in an attempt to weaken Sudan's government at a time when it was developing closer ties with China. When the atrocities began to escalate in Darfur and the US Sate Department officially labeled the killings in Darfur genocide', it seemed the US was considering invading Sudan on a platform of ending the genocide, disposing of the dictator who made the mistake of giving China access to its oil fields, and replacing him with a leader who would allow US corporations to funnel oil from Sudan.

However, now that Sudan has proved willing to cooperate with the US, new questions arise. Why would Sudan be dealing so comfortably with Washington unless it knew that it would not be held accountable for its own atrocities in any real sense?

It doesn't seem altogether unfeasible for the governments of Sudan and the US have made a pact stating that the US would use its power to prevent action against the genocide in Darfur, in exchange for aid in countering terrorism' and, at some point, access to untapped oil? It is hard to think of another explanation for the sudden friendship of the two regimes. The US has been considering an attempt to repeal the sanctions placed on Sudan, a move favored both by Khartoum and by US oil companies.

Once again, it seems the US is being complicit with genocide and making deals with the war criminals responsible, just as previous US administrations were complicit with the rise of the Khmer Rouge in Cambodia which was engaged in a battle with the North Vietnamese by allowing Thailand (then a US client state) to sell arms to Pol Pot while he exterminated 1.7 million of his own people. Just as the US was silent during the Rwandan genocide and instead focused on the bombing of Yugoslavia, the US is again ignoring a massive tragedy in Sudan in favor of perusing its immediate imperial interests and destroying the resistance in Iraq.

Of course, just because ties have increased between Khartoum and Washington doesn't mean that the US wouldn't abandon the Sudanese government if the US feels the alliance is no longer politically expedient or if Sudan is insubordinate, but right now it seems like the alliance is a win-win situation for both governments; the only losers of course being the citizens of Darfur experiencing living hell.

The situation in Darfur is still one the of the worst humanitarian catastrophes in the world with nearly 200,000 dead, either due to violence or famine, and 2 million displaced. The pro-government militias continue to raid the towns of Darfur, killing men, raping women, and plundering entire villages, often abducting young women and using them as sex-slaves. It is clear that rapid action is necessary to save innocent lives and end the mass slaughter.

The solution to the tragedies in Darfur is most certainly not an American or NATO military intervention; such an imperial intervention would only augment the suffering felt in Sudan. To protect the human rights of Sudanese civilians, it would be necessary for the UN to launch a major peacekeeping mission or for the world to come together to fund the African Union's peacekeeping campaign. The AU has already launched a peace keeping mission, and AU peace keepers have been effective in stopping violence in areas where they are dispatched. However, the AU does not have the resources to sustain the kind of mission necessary to bring any degree of peace to Sudan, and has only been able to deploy 3,000 troops to Darfur, a region the size of France. In addition to enduring vicious campaigns of violence, the people of Sudan are also in dire need of humanitarian aid and are experiencing a great shortage in food, medicine, clean water, and other life essentials.

If the international community does not work together to build a peacekeeping campaign and the humanitarian aid campaign, the Oxfam aid agency predicts that the humanitarian crisis in Sudan will continue until October 2006, most likely bringing hundreds of thousands of additional deaths. However, it seems the US may present an obstacle to such campaigns, as it does not want to offend its terrorist ally in Khartoum.