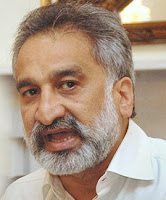 KARACHI: Sindh Senior Minister Zulfiqar Mirza said that in his view Afaq Ahmed is the real leader of Urdu speaking community and he is the second major political prisoner after Asif Zardari, Geo News reported. He was of the view that if Afaq Ahmed was a criminal then Altaf Hussain was a 100 times bigger criminal. He was addressing media at Mardan House here. Mirza pointed out that Dr Ishrat-ul-Ibad forced him to say that he didn’t meet Afaq but ‘I admit that have met him not once but twice’. He said he would continue to act against gangsters and extortionists. REFERENCE: Afaq second big political prisoner after Zardari: Mirza Updated 2 hours ago http://www.thenews.com.pk/NewsDetail.aspx?ID=18671&title=Afaq-second-big-political-prisoner-after-Zardari:-Mirza 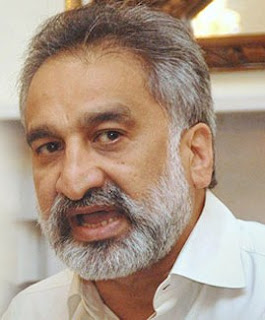 KARACHI: Pakistan Peoples’ party leader and senior Sindh Minister Zulfiqar Mirza said on Wednesday that he considers Afaq Ahmed the ‘actual leader’ of Urdu speaking community rather than Altaf Hussain and Ahmed was the second major political prisoner after Asif Zardari, DawnNews reported. MQM chief was a 100 times bigger criminal than Afaq, said the flamboyant leader as he was addressing the media in a dinner hosted by ANP Sindh Chief Shahi Syed to celebrate revival of controversial Commissionerate sytem. Mirza admitted to have met with Afaq Ahmed not once but twice. He pointed out that Dr Ishrat-ul-Ibad forced him to deny meeting with Afaq. PPP leader vowed to continue acting against gangsters and extortionists. REFERENCE: Afaq ‘actual leader’ of Urdu speakers, Altaf not: Mirza DawnNews | DAWN.COM (39 minutes ago) Today http://www.dawn.com/2011/07/14/afaq-%E2%80%98actual-leader%E2%80%99-of-urdu-speakers-altaf-not-mirza.html Zulfikar Mirza’s remarks ignite violence in Karachi By Azfar-ul-Ashfaque | From the Newspaper (1 hour ago) Today http://www.dawn.com/2011/07/14/zulfikar-mirzas-remarks-ignite-violence-in-karachi.html 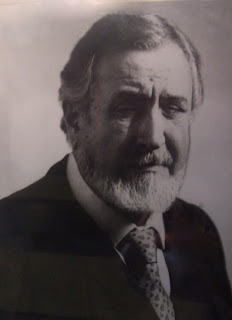 New subject: From ‘Honest Rat rathonest@yahoo.com’ came the following email message on Friday: “Dr Safdar Sarki is the former chairman of the World Sindhi Congress, London, an American national, a Sindhi nationalist and political activist, who has been arrested by security agencies in Karachi. Plainclothes security personnel arrested him from his relative’s flat in Karachi on February 23, 2006, from Gulistan-i-Jauhar area by SP Chaudry Aslam (former anti-robbery head) and it is still not known where he is. He is being tortured at an unknown place. A petition was filed in court yesterday to produce him in the court but there has been no response. “Dr Safdar Sarki was severely beaten and tortured for about an hour in his flat in Karachi at about 3 am local time, then he was taken blindfolded to an unknown location. All his belongings, including his laptop, driving licence, US passport, money and valuables, were confiscated by the agency personnel. The witnesses saw Dr Sarki bleeding heavily before being bundled into an unmarked vehicle. “Dear Cowsgee Saeen, please write an article about this story if possible. In a country where the power virtually flows from the barrel of a gun, where the military dictatorship is in vogue, accountability is an unknown commodity and the judiciary is the weakest link. It is so easy for the security agencies to ‘kill’ or ‘terminate’ anyone. Just declare him or her an Indian agent, terrorist, or a dacoit and shoot him in daylight. No one will even point a finger at ‘you’. Some would even applaud. That’s how the things are in ‘beloved’ Pakistan. “Dr Sarki’s brother and other relatives have expressed serious apprehensions that his life is in real danger. The police and the agencies have not disclosed his whereabouts. I appeal to the human rights activists, media men, political activists and all the readers to please act in this case and force the government to immediately release the gentleman. If there is any charge sheet against him, it should be brought into an open court and he must be given full rights to defend himself. “I am literally begging you to do something if you can. I don’t even know what to ask you for. Pick up your pen or phone? I don’t know. All those years I fought, challenged and contested his ideas. I did not know in the end I would have to beg for his life! Please do what you think is right.” He thought it right to pass it on to me, as I had already written on the subject of Dr Sarki’s strange arrest by the ubiquitous ‘agencies’ and his subsequent disappearance. Despite our numerous laws and legislations, despite our adherence to habeas corpus, Dr Safdar Sarki of Jeay Sindh remains untraced. Shortly after he was picked up, his wife circulated a letter via the internet, e-mail and otherwise, which also had no effect, elicited no reaction. Dr Sarki is a citizen of the United States, but if he holds dual nationality, if he is also a citizen of this country, then there is not much the US State Department or even George W Bush can do for him, as the non-laws of Pakistan will prevail. REFERENCE: Life must go on — and on By Ardeshir Cowasjee March 5, 2006 Sunday Safar 4, 1427 http://archives.dawn.com/weekly/cowas/20060305.htm We need to know, general By Ardeshir Cowasjee July 16, 2006 Sunday Jumadi-ul-Sani 19, 1427 http://archives.dawn.com/dawnftp/72.249.57.55/dawnftp/weekly/cowas/20060716.htm
The Statement which has become a bone of contention! 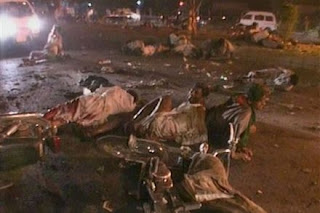 TORN apart by ethnic and political strife, Karachi has long been a tinderbox that can be set ablaze by the smallest of sparks. There is no shortage of antagonists in this city and the latest round of allegations can trigger a deadly chain reaction. It has often been said that Karachi is more cosmopolitan than any other major city in Pakistan. A patchwork and quite resplendent quilt, if you will, that had been carefully and harmoniously crafted over time but began falling apart at the seams in the mid-`80s. Since then we have seen peaceful pauses that are almost inevitably destroyed by the most horrible violence imaginable. Mohajir versus Sindhi nationalists, the security operation against the MQM, a short-lived spell of `activism` by the Punjabi Pakhtun Ittehad and then the out-and-out conflict between the MQM and the ANP that has rocked the city in recent years. Now yet another inflammatory ingredient has been tossed into the pot. The Muttahida Qaumi Movement, which has parted ways with the Pakistan People`s Party, is clearly at loggerheads with the administration. Neither side has done itself any favours. Zulfiqar Mirza of the PPP seems bent on provocation. He almost boasted the other day that he met MQM-Haqiqi leader Afaq Ahmed, Muttahida`s primary foe, in jail. Is it becoming of a minister to have contact with a man who is, rightly or wrongly, accused of heinous crimes including murder? The government must act with greater restraint than its opponents. The MQM, for its part, has thrown down the gauntlet, challenging the government to take its pick: political negotiation or street combat. As messages go this one is quite clear, for it seems that both sides have taken polar positions that can only hurt the city further. The MQM`s statements come close to a threat of extreme violence. At the same time, the MQM ought to be asked whether a person like Aamir Khan, a former dissident who was until recently accused by the MQM of similar atrocities, should have been present at the press conference in which the Muttahida`s Anis Kaimkhani lambasted the PPP. Karachi has seen enough warfare and cannot afford another showdown. Too much blood has been spilled already, families devastated and livelihoods lost due to industrial shutdowns and a general fear factor that is crippling productivity. The numbers game cannot be played out in Sindh. The political situation here is far too complex than in other parts of the country and cannot be resolved without a joint effort. We need to learn how to live with ourselves. REFERENCE: Playing with fire From the Newspaper (11 hours ago) http://www.dawn.com/2011/07/12/playing-with-fire.html
Posted by Aamir Mughal at 3:01 PM

"We condemn these despicable acts of violence designed to provoke fear and division. Those who perpetrated them must know they cannot succeed," Clinton said in a statement.Well said by H.C. ...against their own terrorist apparatus...prophetic eh?

it's really pathetic .Our Defense ministers need to answer that what our soldiers and local police Departments are doing.
how terrorist come in our city and state ? and how can they succeeded in their plans?

It will happen again...these terrorists can do it, because they know, there is no such punishment exists for these kinds of crimes. Only royal treatments as we are giving to Kasab and Guru...