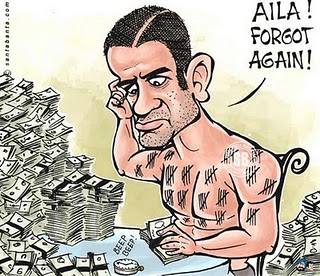 Memory Loss: partial or total loss of memory; "he has a total blackout for events of the evening" amnesia, blackout - cognitive state, state of mind - the state of a person's cognitive processes, anterograde amnesia, posttraumatic amnesia - loss of memory for events immediately following a trauma; sometimes in effect for events during and for a long time following the trauma retrograde amnesia - loss of memory for events immediately preceding a trauma forgetfulness - tendency to forget selective amnesia - amnesia about particular events that is very convenient for the person who cannot remember; "why do politicians always develop selective amnesia when questioned about their transgressions?" transient global amnesia - memory disorder seen in middle aged and elderly persons; characterized by an episode of amnesia and bewilderment that lasts for several hours; person is otherwise alert and intellectually active http://www.thefreedictionary.com/memory+loss
Hanif Abbasi (PML - N) VS Waseem Akhtar (MQM) (Off the Record 2011)

ISLAMABAD, July 8: The Pakistan Muslim League-Nawaz and Muttahida Qaumi Movement on Friday acted in unison to requisition sessions of both houses of the parliament. The two requisitions, one submitted to the Senate Secretariat and the other to NA Secretariat, say the two parties want to discuss in parliament the ongoing violence in Karachi, non-implementation by the executive of the Supreme Court orders and “massive rigging and misuse of government resources” during the recent AJK elections. The move came two days after top leaders of the PML-N and MQM resolved to set aside their bitter history and work as a combined opposition in parliament.—Staff Reporter REFERENCES: PML-N, MQM requisition NA, Senate sessions http://www.dawn.com/2011/07/09/pml-n-mqm-requisition-na-senate-sessions.html
Khawaja Asif (PML - N) on MQM.

ISLAMABAD, July 6: The Pakistan Muslim League-N and Muttahida Qaumi Movement agreed on Wednesday to work together as a ‘combined opposition’ in parliament and provincial assemblies. “We have decided in principle to play our role as a strong opposition while remaining within legal and constitutional limits,” MQM’s deputy parliamentary leader in the National Assembly Haider Abbas Rizvi told reporters after a meeting between senior leaders of the two parties. It was their first formal contact in recent years. Reading out a joint statement, he said the two parties had decided to “carry out a joint struggle” to solve problems being faced by the nation. The PML-N team, headed by Senator Ishaq Dar, included senators Pervaiz Rashid and Mushahidullah Khan and MNA Khwaja Saad Rafique. MNA Waseem Akhtar and MQM coordination committee member Raza Haroon assisted Mr Rizvi in the talks which lasted more than two hours. Mr Rizvi said the two sides had discussed the political situation, electricity and gas loadshedding, price hike, political patronisation of corruption, deteriorating law and order, poor condition of economy, rigging in Kashmir elections and misuse of government power. REFERENCE: PML-N, MQM to work together in assemblies By Amir Wasim | From the Newspaper July 7, 2011 http://www.dawn.com/2011/07/07/pml-n-mqm-to-work-together-in-assemblies.html
Faisal Subzwari (MQM) Exposing Nawaz Sharif (PML - N) (Samaa TV)

Ishaq Dar said the two parties had set aside their differences and decided to work together in the interest of the country and to oppose the government through lawful and constitutional means. “We have fought three wars with India. It does not mean that we should close the doors for dialogue,” he said when a reporter pointed out that in the past PML-N chief Nawaz Sharif had declared the Muttahida a terrorist organisation. Mr Dar admitted that the two parties had ‘reservations’ against each other because of past bitterness, but said they had now decided to put aside these issues in the best interest of the country. When asked about the possibility of launching an anti-government movement, he said it depended on the performance of the government. “If the government does not perform we will use alternatives while living within the legal and constitutional domain.” REFERENCE: PML-N, MQM to work together in assemblies By Amir Wasim | From the Newspaper July 7, 2011 http://www.dawn.com/2011/07/07/pml-n-mqm-to-work-together-in-assemblies.html
Imran Khan on MQM, ANP & PPP (Express News 24/7)

The two arch rivals of the past established informal and backdoor contacts soon after the MQM decided last month to part ways with the PPP-led coalition at the centre and in Sindh in protest against the ruling party’s alleged role in the postponement of elections for two seats of the AJK Legislative Assembly in Karachi. Leaders of the two parties recently held talks in Dubai and London. Punjab Chief Minister Shahbaz Sharif and Leader of the Opposition in the National Assembly Chaudhry Nisar Ali Khan and MQM’s parliamentary leader in the National Assembly Dr Farooq Sattar and former Sindh governor Dr Ishratul Ibad are in London. Talking to reporters after presiding over a party meeting in Lahore earlier this month, Nawaz Sharif had expressed his readiness to join hands with the MQM and ‘welcomed’ it into what he called a grand political alliance “to rid the nation of the present government”. The statement came a day before the departure of Shahbaz Sharif to London on a week-long visit amid speculations that he might meet MQM chief Altaf Hussain. A PML-N spokesman, however, said such a meeting was no scheduled. The MQM had taken Mr Sharif’s statement positively, but said it was not ready to join any move to topple the government. REFERENCE: PML-N, MQM to work together in assemblies By Amir Wasim | From the Newspaper July 7, 2011 http://www.dawn.com/2011/07/07/pml-n-mqm-to-work-together-in-assemblies.html
Faisal Subzwari (MQM) VS Hanif Abbasi (PML - N) - 1 (Off the Record 2009)

“We recognise the PML-N mandate and will definitely cooperate with it on the opposition benches in parliament, but we do not believe in plans to topple governments to achieve certain political goals,” MQM leader Wasay Jalil had said. When contacted, PML-N Senator Pervaiz Rashid said the two parties had not discussed any plan to launch an anti-government movement or form an alliance. He said they had basically decided to jointly press the government on key issues like delay in the presentation of accountability law and energy crisis. Senator Rashid, who is official spokesman for the PML-N-led Punjab government, said the issue of nomination of Mr Dar as the leader of opposition in the Senate did not come under discussion because the talks were held on a “broad-based agenda” to resolve larger national issues. REFERENCE: PML-N, MQM to work together in assemblies By Amir Wasim | From the Newspaper July 7, 2011 http://www.dawn.com/2011/07/07/pml-n-mqm-to-work-together-in-assemblies.html
Faisal Subzwari (MQM) VS Hanif Abbasi (PML - N) - 3 (Off the Record 2009)

Although relations between the two parties have been tense since the early 90s when a military operation was carried out against the MQM in Karachi and Hyderabad during the first term of Nawaz Sharif as prime minister, their rivalry worsened when the PML-N came out with harsh criticism of the Muttahida for supporting former military ruler Gen Pervez Musharraf. At a conference of opposition parties in London in 2007, the PML-N had declared that it would never establish contacts with the MQM in future because of its alleged role in the May 12 killings in Karachi during the visit of the then deposed chef justice Iftikhar Mohammad Chaudhry. Leaders of the two parties kept issuing statements against each other and on a number of occasions even used abusive language against the each other’s leaders. Political observers term the latest ‘friendship’ a significant political development which can have an impact on future events. REFERENCE: PML-N, MQM to work together in assemblies By Amir Wasim | From the Newspaper July 7, 2011 http://www.dawn.com/2011/07/07/pml-n-mqm-to-work-together-in-assemblies.html
Posted by Aamir Mughal at 4:04 AM