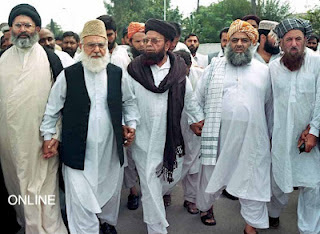 Once again the Bill on Domestic Violence (Prevention and Protection) for the Islamabad Capital Territory (ICT) has been deferred by the joint session of Parliament on April 4. This Bill was unanimously passed by the National Assembly in 2009. It was stuck in the Senate that referred it to the mediation committee for further deliberation. The Bill remained in the cold storage till the passage of 18th Constitutional Amendment that devolves legislative issues to the provinces. With the drastic increase in all forms of social, economic and political insecurities under the present regime, the only feather in the cap of the present government is that it has managed to pass some pro-women statute laws. This includes Sexual Harassment at Work Place Act (2010), Acid Control and Acid Prevention Act (2011), Prevention of Anti-Women Practices Act (2011) and Women in Distress and Detention Act (2011). Women who entered parliaments on reserved seats for women have been making efforts for the passage of a Bill on Domestic Violence since 2002. Every time the Bill on Domestic Violence is blocked by decadent, anti-women right wing forces sitting in the legislative assemblies at the national and provincial levels. The question is why there is so much resistance to the passage of Domestic Violence Bill in our country? What is the argument of those who keep on blocking this important, urgently needed piece of legislation? What are the implications of this Bill for the family and the society? These are important questions that need to be addressed and analysed. The JUI and the PML-N which opposed the Bill on Thursday did not refer to any particular clause of the Bill that they had objections to.Maulana Fazulur Rehman simply blasted the Bill on the ground that it was the conspiracy of the West and foreign funded NGOs which are working against Islam and trying to destroy our family system through the introduction of this Bill. He accused women rights activists as agents of the Western powers who are working on women’s rights for American dollars. The PML-N simply asked for more time to review the Bill. It was very obvious from the arguments of the representatives of both parties which blocked the Bill that none of them had even bothered to read it. First of all, as mentioned earlier that this is the Bill that was unanimously passed by the National Assembly in 2009. The PML-N and JUI had expressed no reservation at that time then why now? The opposition to the Bill is clearly a part of political bargaining in new political alignments. Secondly, if they had objection to some of the clauses of the Bill (the position they are taking now), why those inadequacies were not shared with the mover of the Bill and the committee that was working on the Bill, which includes the representatives from all parties, including JUI and PML-N. If the PML-N did not bother to give their input in the drafting of the Bill over the last many months, how would they do so in the next few days? It appears a lame excuse and simply a retarding ploy to block the Bill. REFERENCE: Politics of domestic violence bill Dr Farzana Bari Tuesday, April 10, 2012 http://www.thenews.com.pk/TodaysPrintDetail.aspx?ID=102205&Cat=2&dt=4/10/2012
Javed Chaudhry & Sultan Lakhani (Express news) promotes Acid Throwing on Woman http://express.com.pk/epaper/PoPupwindow.aspx?newsID=1101487647&Issue=NP_LHE&Date=20120401

Based on the Qur’anic teachings, the Prophet Muhammad (pbuh) explained the procedure and mode of divorce clearly. In the light of these guidelines, Muslim jurists set out the detailed rules for all matters related to divorce. The key points relevant to this discussion are outlined below:
Any talaq given for the period during which the husband can revert back to his wife is called talaq-e-rujaee (revocable divorce). After the first or second pronouncement of divorce, even if the iddah period is completed, the husband, prior to the pronouncement of the third divorce, has the option of taking his wife back by re-solemnization, with her consent. This type of divorce is called talaq-e-bain sughra. The third pronouncement makes divorce final and irrevocable — it is then called talaq-e-bain kubra or mughallaza (the third, irrevocable divorce). The third divorce means that the couple can never rejoin, unless the extraordinary condition of halala is fulfilled. Halala is the situation where a divorced woman marries another man in a regular manner with the solemn intention of living with him, but again unfortunately separates from him due to his death or divorce. She is then allowed under Islamic law to remarry her former husband, if she so wishes.[20] Notably, the ugly custom of preplanned halala, in which the former husband manipulates someone to marry his former wife and then divorce her immediately without even consummation for enabling him to remarry the woman, is a mockery of the divine law and is cursed by the Prophet Muhammad (pbuh).[21] The Caliph Omar and Abdullah bin Omar regarded such marriages as adultery.[22] - REFERENCE: Dissolution of Marriage: Practices, Laws and Islamic Teachings Policy Perspectives, Vlm 4, No.1 http://www.ips.org.pk/islamic-thoughts/1120-dissolution-of-marriage-practices-laws-and-islamic-teachings.html#_ftn21

Fatawa Alamgiri Ek Nazar  http://www.ziyaraat.net/books/FatawaAlamgeereParAikNazar.pdf  do read how Immoral & Absurd our Mullahs are. 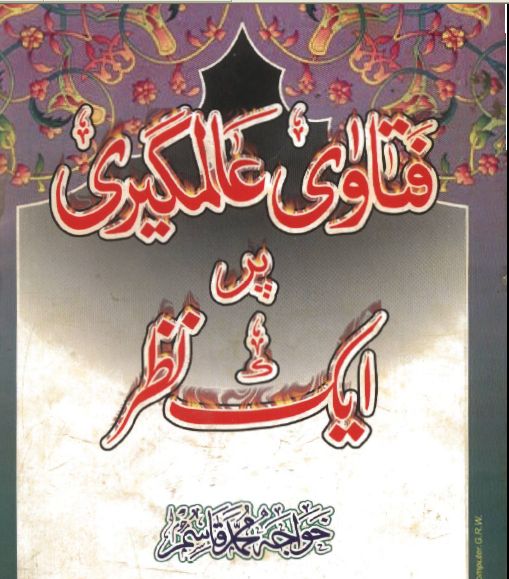 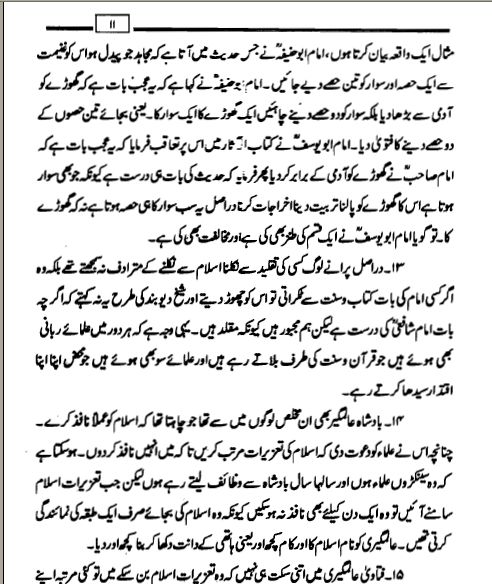 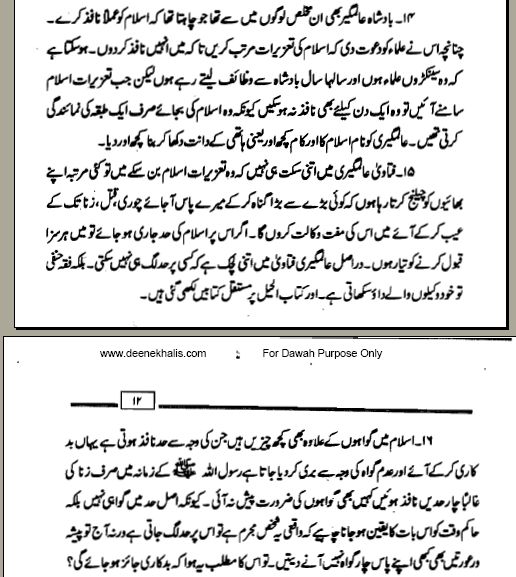 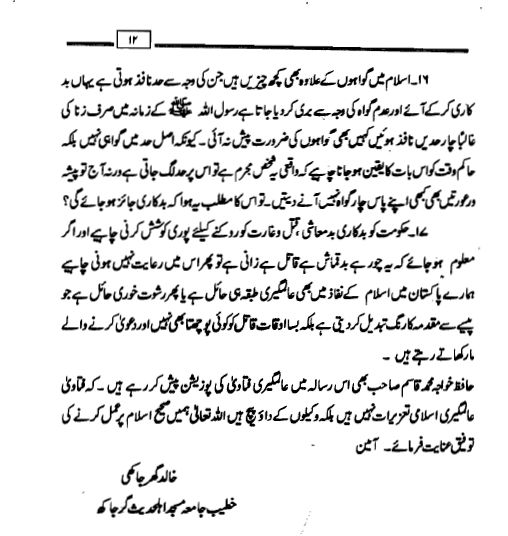 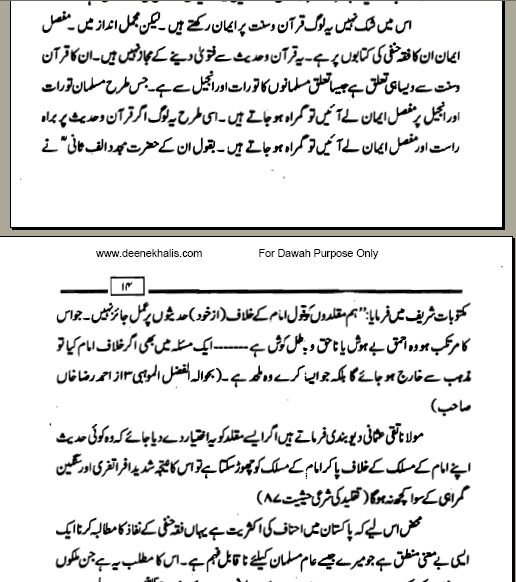 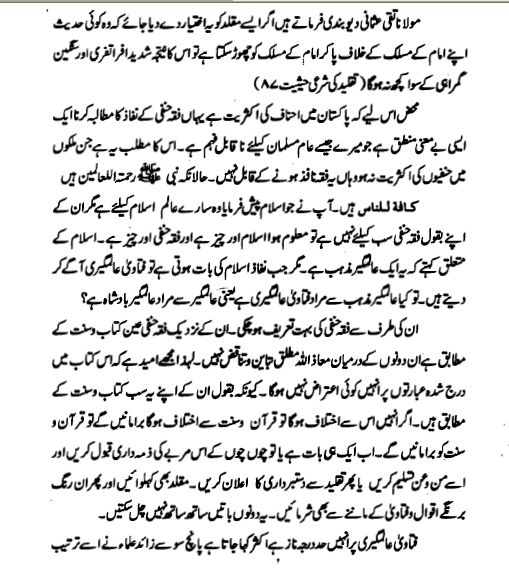 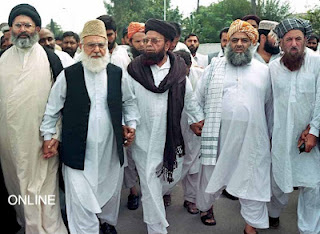 SAYING Talaq three times to effect a divorce has become part of the psyche of some Muslims in South Asia, to have the word ready to be blurted out three times whenever stress is felt in the husband-wife relationship. This act of pronouncing all three talaqs in one breath and its destructive and tragic fallout is the result of lack of knowledge about the injunctions on divorce in the Quran and hadith. The Holy Prophet (PBUH) is reported to have said that divorce is one of those permitted acts which is most disliked by God. When Hazrat Omar was the caliph, he used to punish those men severely who pronounced a three-in-one divorce. This is why if husband and wife cannot get along, two arbitrators, one from each side, should provide counselling to avoid a divorce (4: 35). As a last resort, if steps have to be taken to bring about a divorce, then the prescribed method should be followed, which is to pronounce it once after the woman is clear of her monthly cycle. Then both should live in the same house (65: 1) for a month, during which time the husband will have the right to revoke the divorce. If he does not, he’ll have to pronounce a second divorce after one month. Then after the second monthly cycle is over, he will either have to revoke it or pronounce the divorce for the third and the final time, making it irrevocable: “…either the woman should be asked to stay honourably or asked to leave in the best way. It is not lawful for you to take back anything from what you have given them.”(2: 229) If the man initiates the divorce, he is not supposed to take back any of the dowry or mehr given at the time of marriage or later as gifts. The presence of witnesses at the time of divorce is necessary to make the procedure of divorce complete: “And appoint two honest witnesses from among yourselves, and give testimony for God” (65: 2). The divorced woman should restrain herself for three months before she re-marries (2: 228). “If he divorces her (three times), she will not be lawful for him after this, until she marries another husband and if he (the second husband) divorces her, then there will be no blame on either if they re-marry.” (2: 230)If the woman marries another man, with good intentions, but the second husband divorces her as well, only then she may remarry the first husband. In Surah Al-Baqarah, it is stated, “When you divorce women and they complete their period of waiting, do not prevent them from marrying the husbands of their choice, when they have agreed mutually, in a befitting manner”(2: 232). But in Pakistan, sometimes a man divorces his wife and when she re-marries, he accuses her of adultery and has her and her husband booked under Hudood Ordinances. This is made easier when the divorce is not registered officially. In the case of khula, the unconditional right of the wife to initiate and obtain a divorce, she has to approach the relevant authorities(2: 229). This means if the husband and wife are not able to live together with love and harmony, the woman can ask for a divorce. When she sues for a divorce, without bringing any charges against the husband, she has to return the mehr and the husband is allowed to take it back. There was the case of a beautiful woman, Jamilah bint Abi bin Salul, who came to the Prophet (PBUH) and conveyed to him that she could not bear to be with her husband, Thabit bin Qais. She found him unattractive. The Prophet (PBUH) asked her if she was willing to return whatever mehr he had given her. When she consented, he sent for her husband, discussed the matter with him and brought about a divorce between them. In case pregnant women are divorced, there are instructions to treat them well, “…if they are pregnant spend on them till they lay down their burden” (65: 6). The father is responsible for all the needs of his child. During the time that the divorced wife nurses the child, the father should pay for the mother’s upkeep as well. The parents should cooperate in the matter of the children: “The mothers should nurse their children for a total of two years. This is for those who wish to complete the nursing period. And on him whose child it is, is (the responsibility of) feeding and clothing (even of the divorced, nursing mother), in a befitting manner” (2: 233). So the proper way of giving a divorce is to pronounce it three times at intervals, once a month, for three months, in front of two witnesses, right after the woman’s monthly cycle is over, while she should be living in the same house as the husband. All the jewellery or wealth, etc., given to her will be her property. In order to reform society and to protect husband and wife as well as their children from undue suffering, the Quranic method of giving a divorce should be explained by our scholars, who should be convinced to make people aware of the right and wrong methods of giving a divorce by mentioning these details in their sermons and lectures. REFERENCE: Injunctions on divorce By Nilofar Ahmed Friday, 24 Sep, 2010 http://www.paklinks.com/gs/religion-and-scripture/454662-punishment-for-triple-talaq.html
Fatawa Alamgiri Ek Nazar  http://www.ziyaraat.net/books/FatawaAlamgeereParAikNazar.pdf  do read how Immoral & Absurd our Mullahs are. 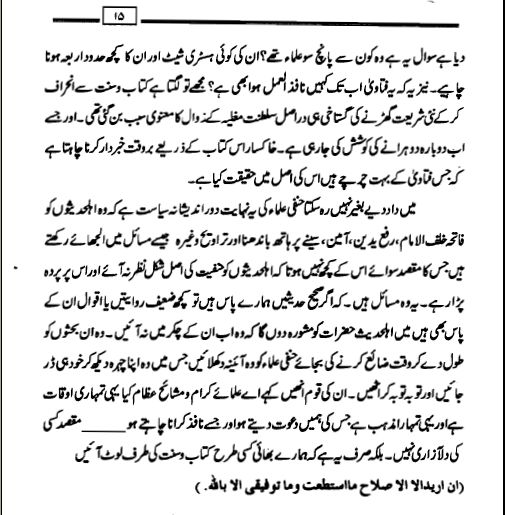 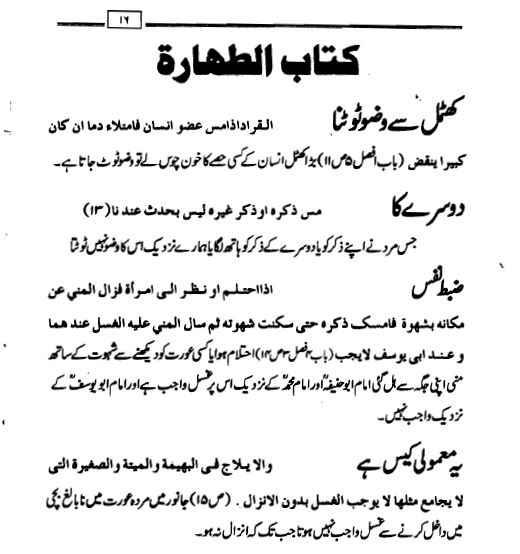 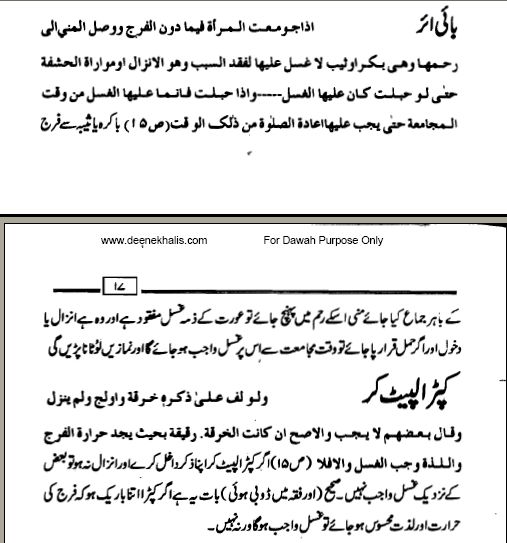 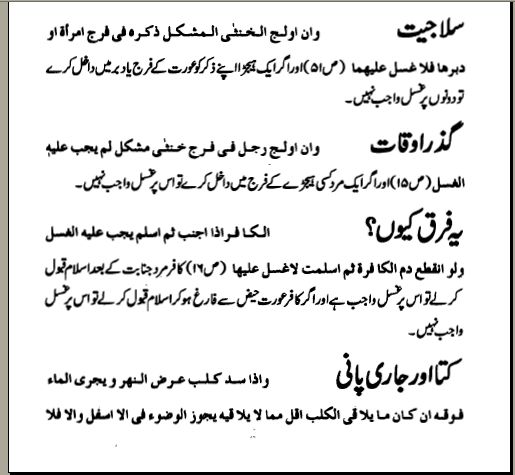 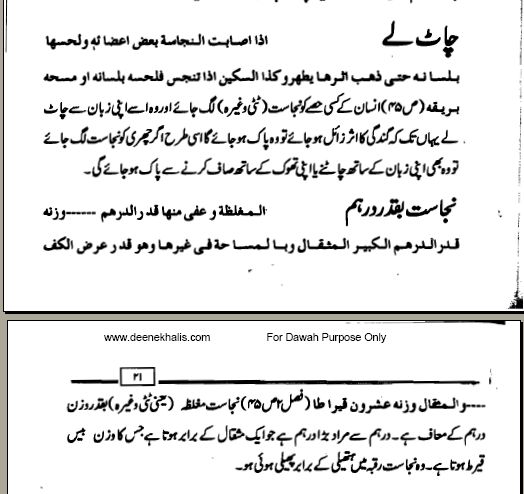 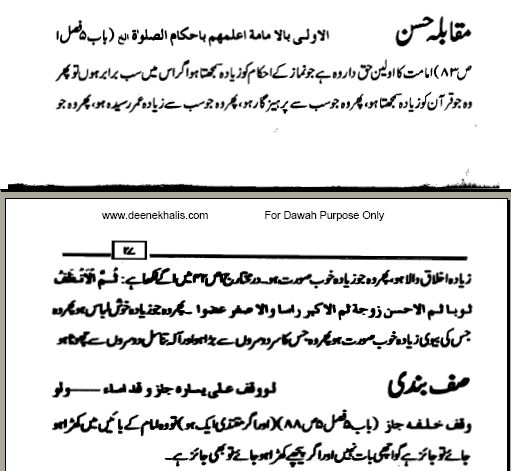 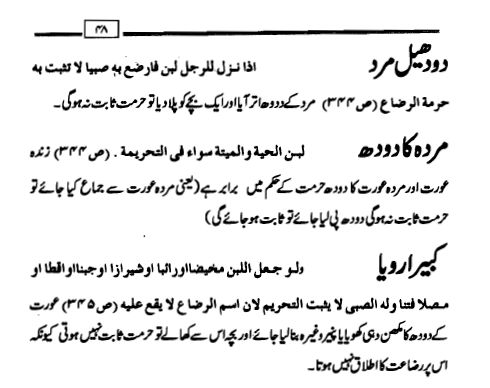 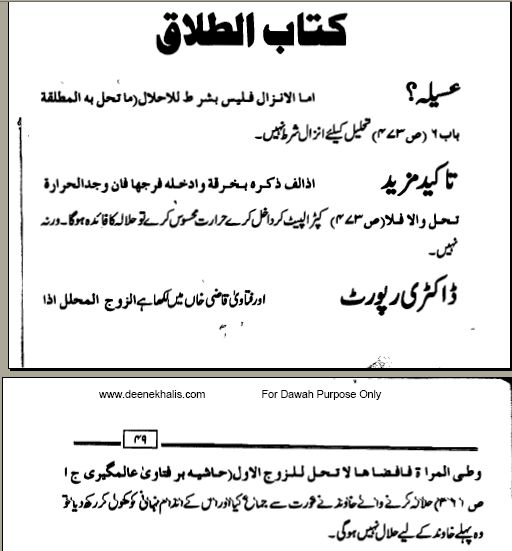 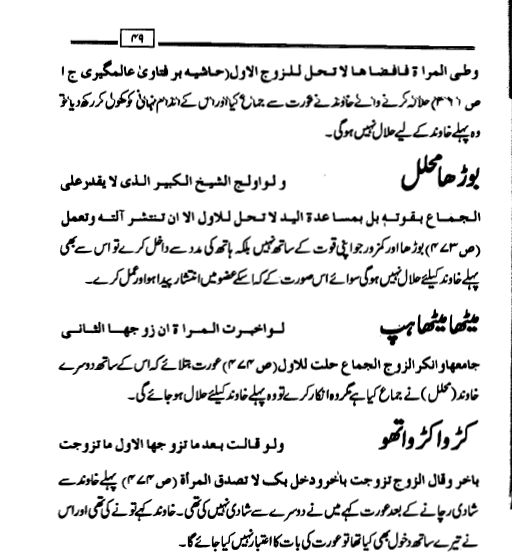 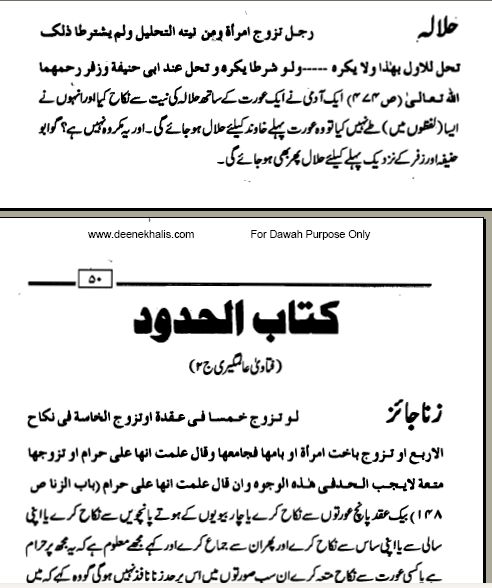 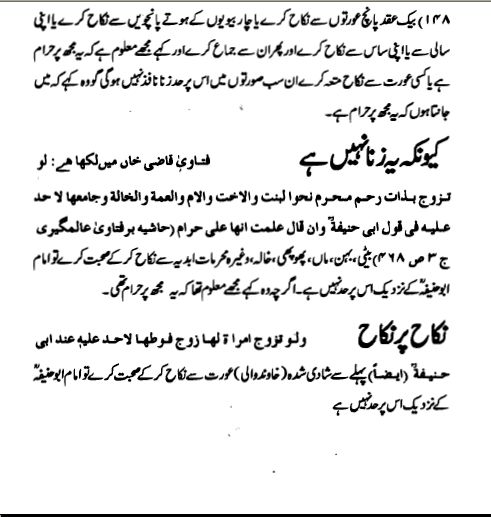 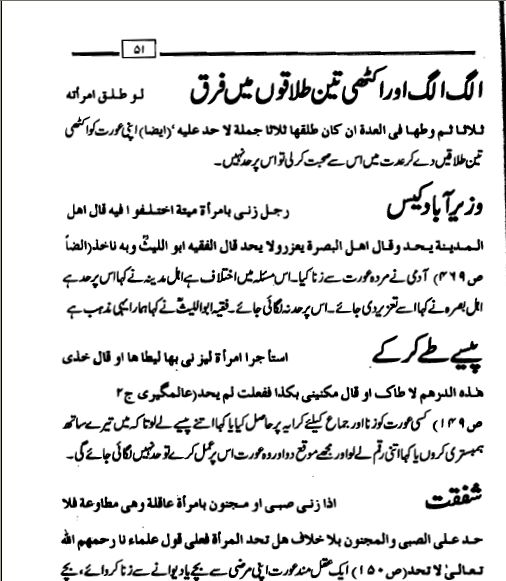 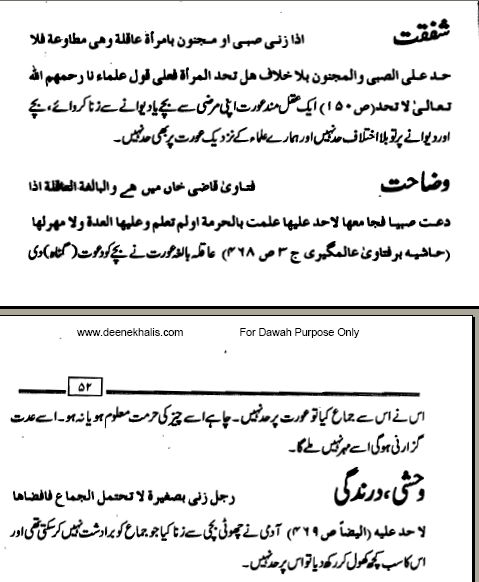