The hate campaign by fake bloggers: whose agenda they are promoting? Raza Rumi 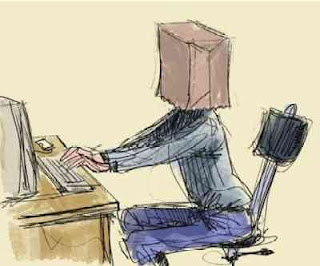 A dubious blog – LUBP – has taken some of my tweets and weaved a story around it. The problem with that blog is that it is not managed by real people but by individuals who have no moral courage to reveal their names. I was wrong about the blog and the people who manage it. I must admit my mistake and change my view. I was supportive of them in the past thinking that all progressive bloggers and voices should come together. I was criticised by several people for engaging with these fake identities. My sole purpose was that progressive discourse on the internet should not be undermined. However, over the past few months it is clear that these cowards are not furthering the progressive agenda but sabotaging it. People like Rabia Shakoor, Ali Arqam who were part of this blog left it due to differences with chief blogger Nishapuri (there is no picture of his to post here since he mysteriously sits in the UK and runs this hate campaign of which I am the latest target. Hence the image on the right is a representation for the readers). Then came threats, vilification and attacks on Dr Saleem Javed, an earnest activist from Quetta who is forever reporting from the ground on social media about the massacre of Hazaras. I was even more intrigued. Here is a man based in a dangerous zone and this anonymous guy sitting in the UK has the audacity to abuse Javed! Perhaps the turning point was the Not-the-so-real-Nishapuri started to attack liberals for condemning the suicide of an acid attack victim Fakhra. He thought that liberals were not condemning Shia killings enough but Fakhra got more attention. This ‘competitive’ politics of condemnation business finally tested my patience. I was appalled at the fact that Nishapuri-Laibaah was trivializing such a gruesome death (the woman underwent dozens of surgeries and died many deaths before her last breath). Lo and behold the bullies started to malign me. This dubious blog should be renamed as Let Us Bully Pakistan ( especially its liberals through false accusations, misrepresentation and promoting the view of ISI sympathisers and Zaid Hamids of the world that Pakistani liberals are the actual problem in this country). LUBP in view of its vicious campaign appears to be a plant of forces which are always looking for opportunities to undermine Pakistan’s liberal and secular minority. This common agenda speaks for itself. The intellectual bankruptcy of this platform is evident from the fact that while they are using my tweets but hurling abuse at The Friday Times and its staff. Quite ridiculous. I will leave that to TFT team to handle that. But the libelous nature of posts will not be ignored. Suffice it to mention that TFT and its chief editor has been under the watch of ISI and had to leave the country last year due to numerous threats. Once again, the LUBP is helping the agencies who have targetted Najam Sethi etc.
Why the bullies started their recent hate-campaign against me?
I was startled to find out one day that the Shia Mullahs were initially part of the deliberations of an all party conference organised by Difa Pakistan Council in Oct, 2011. I was intrigued as to how a community’s clerical leadership was doing that while their apologists in blogosphere were attacking liberals instead of the the Mullahs who happily truck with the establishment; and this is a historical fact. I am posting a few images of the minutes of the meeting of the joint resolution that was passed by Pak Defence Council’s initial meeting on 24 October 2011 at the Ambassador Hotel. It is a charter of sorts as well. According to this letter, obtained from the head of DPC, Maulan Sami ul Haq’s office by a journalist friend, there were two Shia representatives along with some Hindu and Christian representatives.
Here are the images:

I am skipping the full list but here is the basis for my tweets. Check out the numbers 48 and 49 on the list below which indicate two Shia clerics as participants to this conference. 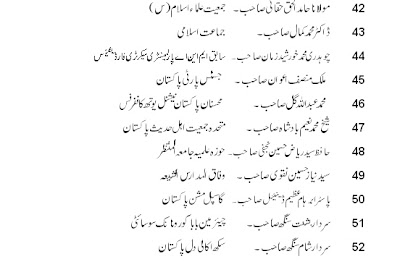 This was the evidence that was given to me; and unlike LUBP I do not make my opinions on conjecture, hatred or wild speculation. I was quite furious and tweeted that why were these Mullahs sharing a stage with DPC. The agenda in the document has their names at the end; and of course this ‘stage show’ by LUBP’s liberal-hating and bashing friends did not exclude the clerics who should not have attended this meeting and made a strong statement about the DPC for the very start. DPC is full of Shia-hating Salafis and other Muslim sects. Guess what Nishapuri-Laibaah found more offensive? That I had tweeted this little uncomfortable truth.

When one criticizes the Shia clerics it does not mean that a community is attacked. Clerics – be they Sunni, Shia or of any other variety – have done more harm than good. If Saudia Arabia has misinterpreted Islam and exported Wahabism, the Iranian clergy has also done no less by turning a great country, with a thousands of years old civilisation into a repressive theological state. Neither can be condoned or justified. If agents of Wahabis are dangerous so are the sympathisers of Iranian regime and its dangerous Mullahs.
Later developments:


After my initial tweets based on the letter above, there was a storm caused by the bullies at LUBP. Luckily a very reasonable and informed tweeter, Mahdi Baloch told me (via Twitter) that the Shia representatives later distanced themselves from the DPC. I have not found any public statements yet. However, Sana Bucha in her TV programme of Feb 4 discussed this issue and the website of DPC does not include the names of these leaders now (http://www.difaepakistan.com/about-us.html) . (Yes they grew apart but on Mahdi Baloch’s insistent tweets I checked on 9 April, 2012 again and I was informed by a source that the leaders were present in the initial meetings, not later though) I even told clarified that many times on Twitter as advised by Mahdi.
Good that clerics are not there anymore and have retracted. But the record of ALL mullahs – Shia and Sunni – has been far from enviable.
In 1974, almost all clerics (including Shia clerics) united to back the state in declaring Ahmedis as non-Muslims and since then a pandora’s box has opened. Sunni extremists such as Dr Israr Ahmed have also called for similar exclusion of Shias.Earlier, a piece I wrote was also condemned for covering the Shia exclusion under the constitutional amendment declaring Ahmedis non-Muslim. Due to a language error the message was unclear or conveyed the different meaning but it was a simple point: the support to Anti-Ahmedi constitution amendment was a death-knell for a tolerant Pakistan and Shia clerics who backed it then, are now becoming a victim of it. On youtube there are many videos which show how some extreme Sunni sects use the Ahmedi-exclusion principle for Shias as well.
In these times, the clerics should remain away from the establishment and its various ploys. As recent as 2009, the Shia clerics apparently backed Nizam e Adal regulation passed to appease the extremists in Swat and which was later reneged by the same militant group[s]. Ali Salman has written an excellent post http://alisalmanalvi.wordpress.com/2012/04/05/identity-assassination-of-shia-community-in-pakistan/ where he gives more detail:

Facing the escalating political pressure to reach a settlement, President Zardari signed the controversial regulation into law on April 13, 2009 after a National Assembly resolution approved of the measure…In a show of rare defiance, only one MNA Ayaz Amir stood up and opposed the regulation valorously despite the grave coercions by Taliban’s spokesman, Muslim Khan, carried by all the daily newspapers in the morning.
As feared the militants took advantage of the peace deal and expanded their territory into other districts and within few days they took control of Buner, Lower Dir and Shangla. Given a free hand to the deo-bandi hard liners, it was evidently understood that the Shia community would suffer the most since Taliban and their supporters firmly believe that Shias are apostates/infidels. Much to the bewilderment of many readers the so called Shia leadership (understandably constituted of religious clerics) gathered in a well known seminary “Jamia tul Muntazir”, located in Model Town Lahore, and fervently endorsed highly controversial Nizam e Adal regulation proposed by Sufi Muhammad vide an announcement letter despite facing such a palpable threat to the community. The letter claimed to have been released with the consent of Sajid Ali Naqvi and it held the support for the regulation as a religious obligation on all the seminaries affiliated with Wafaq ul Madaris Al-Shia Pakistan as well as all the Shias living in Pakistan. It goes without saying that the much extolled Niazm e Adal regulation later yielded in horrific repercussions.
Announcement letter signed by various Shia clerics, at Jamia tul Muntazir Lahore, showing solidarity with Sufi Muhammad is pasted below: 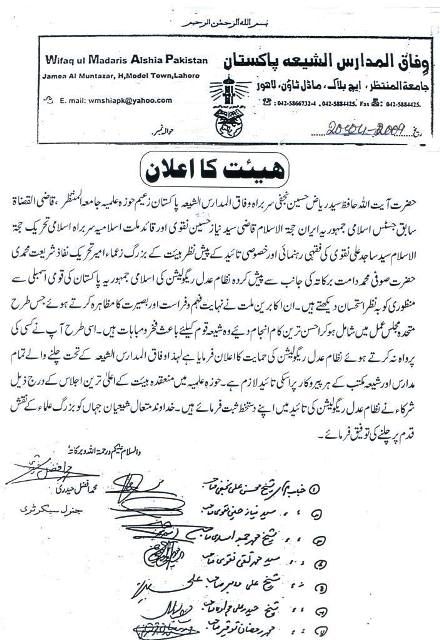 Shia community in Pakistan, bearing in mind that there is no time to lose, will have to find a way out of this absurd state of affairs. Instead of following those who never miss an opportunity to stab in the back, Shias should endeavor to bring forth a leadership that can safeguard their interests and not of those who aren’t anywhere in the picture. Otherwise living peacefully in Pakistan would become a distant dream not only for Shias but for other minorities including Christians, Hindus, Sikhs and Ahmadis considering the sense of insecurity ripping through a commoner’s mind.

In the current scenario, while Shias are being killed some of their religious leaders are chanting the establishment mantra.Nadem Farooq Paracha wrote about it:  http://dawn.com/2012/04/01/smokers-corner-shifting-attentions/

The most interesting is the emergence of the Shia platform, the Majlis-i-Wahdat-e-Muslimeen (MWeM). Constantly harassed and targeted by their Salafi counterparts, Shias finally managed to hold a large religious gathering in Karachi to protest against what many of the MWeM’s leaders assert are the unrelenting murders of Pakistan’s Shias at the hands of the ‘establishment-backed Salafi/Deobandi jihadist outfits.’ The odd thing about this rally was that even during this gathering aimed at Salafi groups and the establishment, many Shia leaders did not miss the opportunity to attack the United States and Nato! This further confirms the fact that anti-Americanism, at least as a political ploy, is now squarely a narrow ruse of Islamic parties and groups of varying sects and sub-sects in Pakistan.

So attacking Mullahs is more difficult and condemning liberals is quicker, easier and wins brownie points by all and sundry. This raises serious doubts and questions about the fake activists and their nefarious agenda. If LUBP and its cowardly, anonymous haters think they can bully people like me they are wrong. Not only that we will counter their campaign, we shall continue to remain true to our firm stand that Pakistani state has to become secular and the influence and role of ALL Mullahs needs to be removed from politics. Activism and advocacy for the cause of Shias, Ahmedis and other endangered communities can only be secular. We have had enough of Mullahs and their ignorance for decades. The hate campaign by fake bloggers: whose agenda they are promoting? Raza Rumi April 11th, 2012 http://pakteahouse.net/2012/04/11/the-hate-campaign-by-fake-bloggers-whose-agenda-they-are-promoting/
Posted by Aamir Mughal at 7:21 AM