Pseudologia fantastica, mythomania, or pathological lying are three of several terms applied by psychiatrists to the behavior of habitual or compulsive lying. It was first described in the medical literature in 1891 by Anton Delbrueck. Although it is a controversial topic, pathological lying has been defined as "falsification entirely disproportionate to any discernible end in view, may be extensive and very complicated, and may manifest over a period of years or even a lifetime." In August 2001, the State of California Commission on Judicial Performance ordered the removal from office of Judge Patrick Couwenberg for making misrepresentations to become a judge, continuing to make misrepresentations while a judge, and deliberately providing false information to the Commission in the course of its investigation.1 The judge had lied at various times to judges, attorneys, a newspaper reporter, and the Commission on Judicial Performance. He told the Commission, under oath, that he had participated in covert CIA operations in Southeast Asia and Africa and that he had a master's degree in psychology when, in reality, he had never been in the CIA nor did he have a degree in psychology. He had committed many other misrepresentations, including stating that he had received a Purple Heart for injuries sustained in Vietnam and dramatically reporting that shrapnel was still lodged in his groin. In reality, he was never in Vietnam during the war. REFERENCE: Pseudologia fantastica http://en.wikipedia.org/wiki/Pseudologia_fantastica#cite_note-jaapl-0 Pathological Lying Revisited Charles C. Dike, MD, MRCPsych, MPH, Madelon Baranoski, PhD and Ezra E. H. Griffith, MD Journal of the American Academy of Psychiatry and the Law Online http://www.jaapl.org/content/33/3/342.long 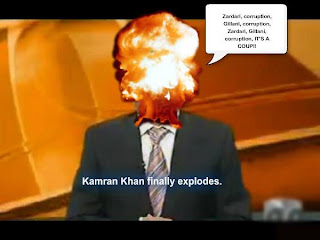 Geo TV‘s Kamran Khan could not have expected what happened when he invited Information Minister Qamar Zaman Kaira (25 April 2012) as his guest on Wednesday to discuss the possible outcomes of contempt charges against the Prime Minister. Kaira’s complaint about Kamran Khan’s behaviour may seem like the frustrations of a PPP Minister, but they might also be familiar to another high profile figure who is anything but a jiyala. Five years ago, Kamran Khan was playing the same role of media creating a biased mindset in the audience only this time his target was not the PM, but Chief Justice Iftikhar Chaudhry himself. We have noted several times the importance of media acting responsibly and not attempting to influence the outcome of a case or to create a biased mindset in the public before the Court has made its decisions. Opposition supporters may be enjoying the media’s keeping the PM in their sights today, but the PPP won’t be the party in power forever. And when the tables turn, well, just ask the Chief Justice… REFERENCE: Kamran Khan’s Contempt For Objectivity http://pakistanmediawatch.com/2012/04/27/kamran-khans-contempt-for-objectivity/ 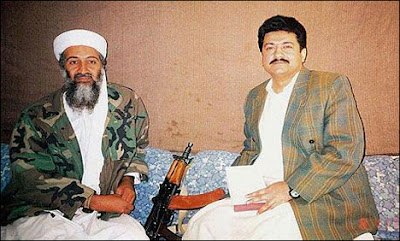 ISLAMABAD, Pakistan — Pakistan’s premier spy service, stung by lingering suspicions that it was complicit in sheltering Osama bin Laden, said Friday that it deserves credit for helping U.S. intelligence officials locate the hideout where the al-Qaeda chief was killed by American commandos nearly a year ago. “The lead and the information actually came from us,” a senior official with Pakistan’s Inter-Services Intelligence Directorate (ISI) said in an interview, reviving a push for recognition ahead of the anniversary of the stealth raid in a town about 70 miles by road north of the capital, Islamabad. On Friday evening, over iced tea at a hotel cafe, two ISI officials offered a narrative that they say puts Pakistan in a better light. They spoke on the condition of anonymity because of the sensitive nature of the matter. One noted that the ISI’s new head, Lt. Gen. Zaheer ul-Islam, is taking a “proactive” approach to public relations to improve the international image of the much-maligned intelligence service. “Any hit on al-Qaeda anywhere in the world has happened with our help,” the official said. The other official, who said he had been intimately involved in the hunt for senior al-Qaeda operatives, including bin Laden, said the ISI provided the CIA with a cellphone number that eventually led to an al-Qaeda courier using the nom de guerre Abu Ahmed al-Kuwaiti. REFERENCES: Pakistan's spy agency seeks some credit for bin Laden's death By Richard Leiby, Published: April 28 http://www.washingtonpost.com/world/asia_pacific/pakistans-spy-agency-seeks-some-credit-for-bin-ladens-death/2012/04/27/gIQANaU7lT_story.html Pakistan provided initial lead in hunt for Osama, say US officials Anwar Iqbal http://dawn.com/2012/04/29/pakistan-provided-initial-lead-in-hunt-for-osama-say-us-officials/
Osama Bin Laden (Capital Talk 02 May 2011)

Mr. Hamid Mir, The News International, Jang Group and GEO TV Falsely claim that first Pakistani Journalist was Hamid Mir who interviewed Osama Bin Laden in 1997 - Osama bin Laden is history now but Al-Qaeda is still determined to make some new history. US officials have rightly claimed many times that Al Qaeda has become weaker after the death of Osama bin Laden but they cannot deny the fact that bin Ladenism is still a source of inspiration for the militants fighting from Afghanistan to Yemen and from Iraq to Palestine. Dead Osama is as dangerous as living Osama. The Obama administration has foiled at least 8 terrorist plots on the US soil since the death of Osama bin Laden on May 2, 2011. President Obama can take credit of bin Laden’s death but he is not aware that actually bin Laden got the death of his own choice. It was his old dream not to be captured by enemy but to be killed by enemy and no burial in any grave. Osama bin Laden always prayed to become a martyr like his old friend Shafiq-al Madni. I heard the name of Shafiq from bin Laden first in 1997. I was the first Pakistani journalist to meet Osama bin Laden in March 1997 and I was the last journalist to interview him seven weeks after 9/11. I started writing his biography in 1998 and once I asked him about the people who impressed him a lot and created big impact on his life. Osama said that he was lucky to have brave friends like Shafiq-al Madni who always loved martyrdom. Shafiq from Madina was a very good player of soccer but he joined the Jihad against the Soviet troops in Afghanistan with Osama bin Laden. He remained on the frontline during the battle of Jalalabad in 1989. REFERENCE: How Obama fulfilled the dreams of Osama http://www.thenews.com.pk/article-46740-How-Obama-fulfilled-the-dreams-of-Osama
Life of Osama Bin Laden - Part 1 (Capital Talk 5 May 2011)

The question here is that I mentioned that I would go somewhat into the story of Bin Laden, the Saudi in Afghanistan and didn’t do so, could I go into some detail? The point about Bin Laden would be roughly the same as the point between Sheikh Abdul Rahman, who was accused and convicted of encouraging the blowing up of the World Trade Center in New York City. The New Yorker did a long story on him. It’s the same as that of Aimal Kansi, the Pakistani Baluch who was also convicted of the murder of two CIA agents. Let me see if I can be very short on this. Jihad, which has been translated a thousand times as “holy war,” is not quite just that. Jihad is an Arabic word that means, “to struggle.” It could be struggle by violence or struggle by non-violent means. There are two forms, the small jihad and the big jihad. The small jihad involves violence. The big jihad involves the struggles with self. Those are the concepts. The reason I mention it is that in Islamic history, jihad as an international violent phenomenon had disappeared in the last four hundred years, for all practical purposes. It was revived suddenly with American help in the 1980s. When the Soviet Union intervened in Afghanistan, Zia ul-Haq, the military dictator of Pakistan, which borders on Afghanistan, saw an opportunity and launched a jihad there against godless communism. The U.S. saw a God-sent opportunity to mobilize one billion Muslims against what Reagan called the Evil Empire. Money started pouring in. CIA agents starting going all over the Muslim world recruiting people to fight in the great jihad. Bin Laden was one of the early prize recruits. He was not only an Arab. He was also a Saudi. He was not only a Saudi. He was also a multimillionaire, willing to put his own money into the matter. Bin Laden went around recruiting people for the jihad against communism. REFERENCE: TERRORISM: THEIRS AND OURS By Eqbal Ahmad (A Presentation at the University of Colorado, Boulder, October 12, 1998) Courtesy: University of Colorado http://www.sangam.org/ANALYSIS/Ahmad.htm http://www.stanford.edu/class/intnlrel193/readings/week3/geopolrev.pdf
Life of Osama Bin Laden - Part 2 (Capital Talk 5 May 2011)

I first met him in 1986. He was recommended to me by an American official of whom I do not know whether he was or was not an agent. I was talking to him and said, ‘Who are the Arabs here who would be very interesting?’ By here I meant in Afghanistan and Pakistan. He said, ‘You must meet Osama.’ I went to see Osama. There he was, rich, bringing in recruits from Algeria, from Sudan, from Egypt, just like Sheikh Abdul Rahman. This fellow was an ally. He remained an ally. He turns at a particular moment. In 1990 the U.S. goes into Saudi Arabia with forces. Saudi Arabia is the holy place of Muslims, Mecca and Medina. There had never been foreign troops there. In 1990, during the Gulf War, they went in, in the name of helping Saudi Arabia defeat Saddam Hussein. Osama Bin Laden remained quiet. Saddam was defeated, but the American troops stayed on in the land of the kaba (the sacred site of Islam in Mecca), foreign troops. He wrote letter after letter saying, Why are you here? Get out! You came to help but you have stayed on. Finally he started a jihad against the other occupiers. His mission is to get American troops out of Saudi Arabia. His earlier mission was to get Russian troops out of Afghanistan. See what I was saying earlier about covert operations? A second point to be made about him is these are tribal people, people who are really tribal. Being a millionaire doesn’t matter. Their code of ethics is tribal. The tribal code of ethics consists of two words: loyalty and revenge. You are my friend. You keep your word. I am loyal to you. You break your word, I go on my path of revenge. For him, America has broken its word. The loyal friend has betrayed. The one to whom you swore blood loyalty has betrayed you. They’re going to go for you. They’re going to do a lot more. These are the chickens of the Afghanistan war coming home to roost. This is why I said to stop covert operations. There is a price attached to those that the American people cannot calculate and Kissinger type of people do not know, don’t have the history to know. REFERENCE: TERRORISM: THEIRS AND OURS By Eqbal Ahmad (A Presentation at the University of Colorado, Boulder, October 12, 1998) Courtesy: University of Colorado http://www.sangam.org/ANALYSIS/Ahmad.htm http://www.stanford.edu/class/intnlrel193/readings/week3/geopolrev.pdf 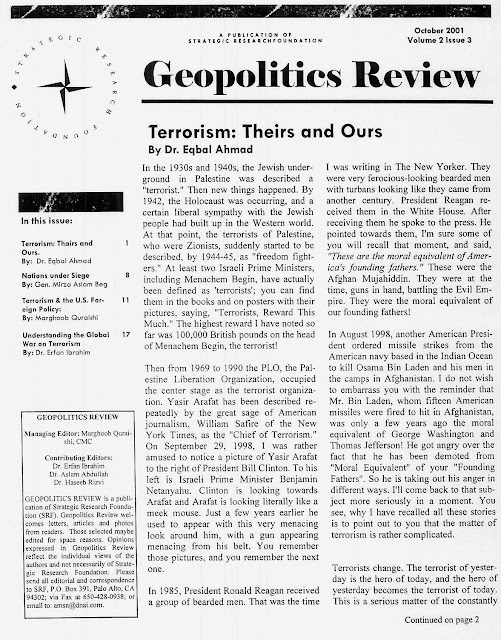 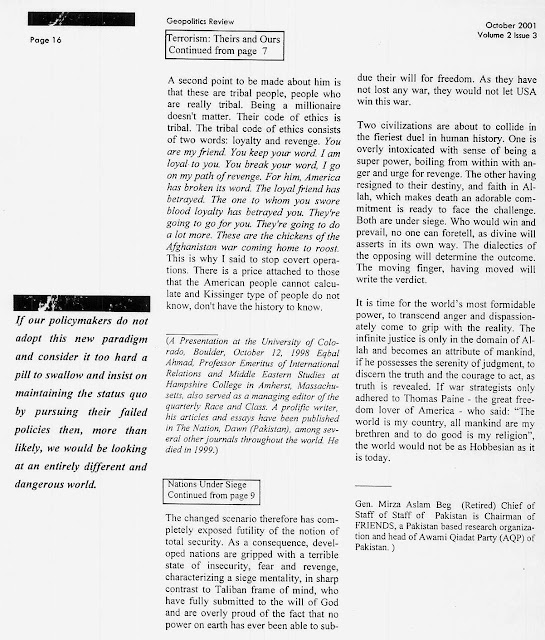 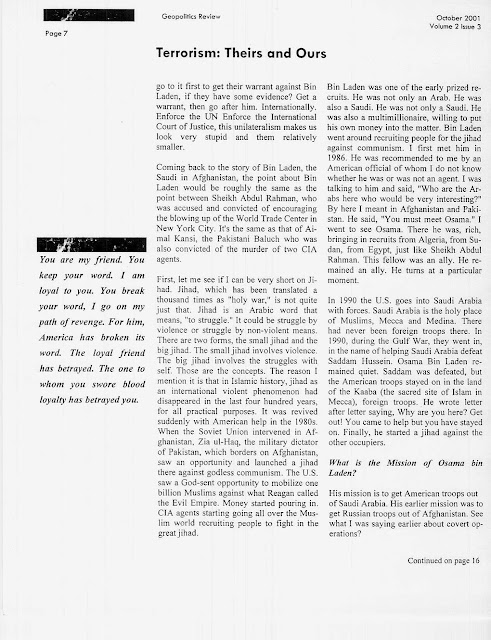 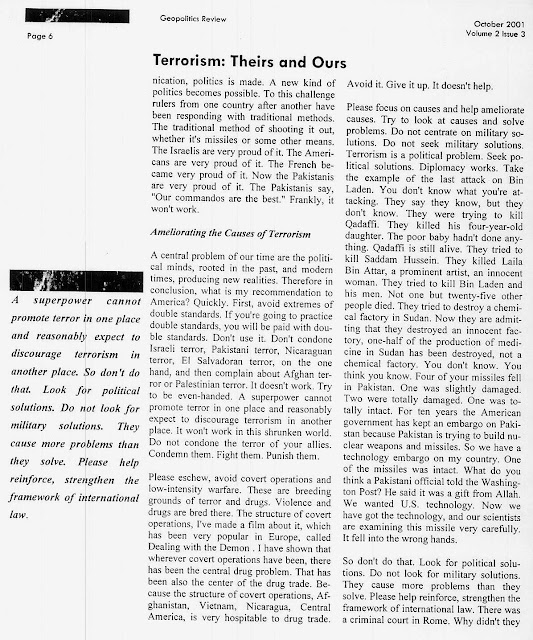 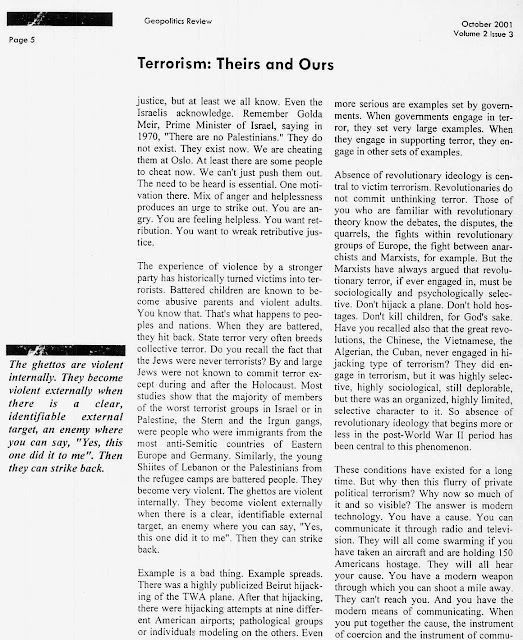 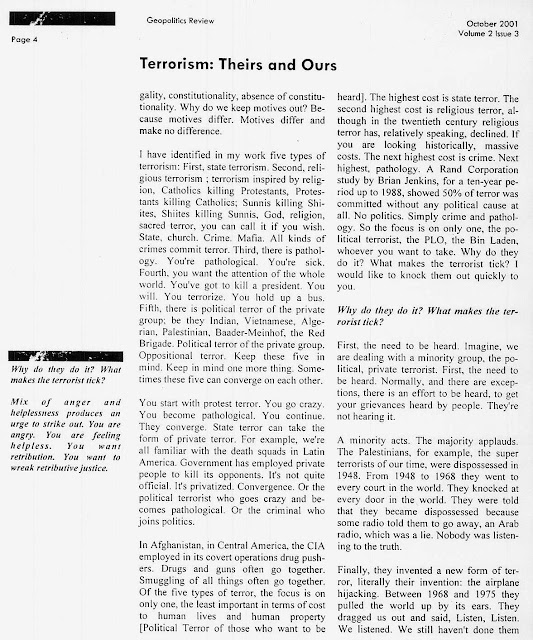 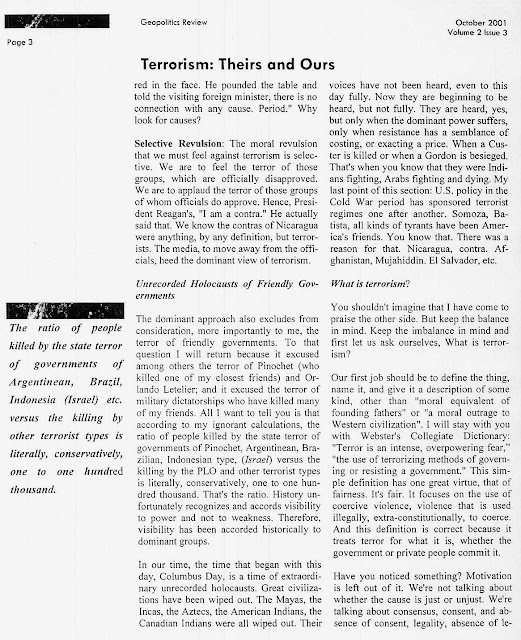 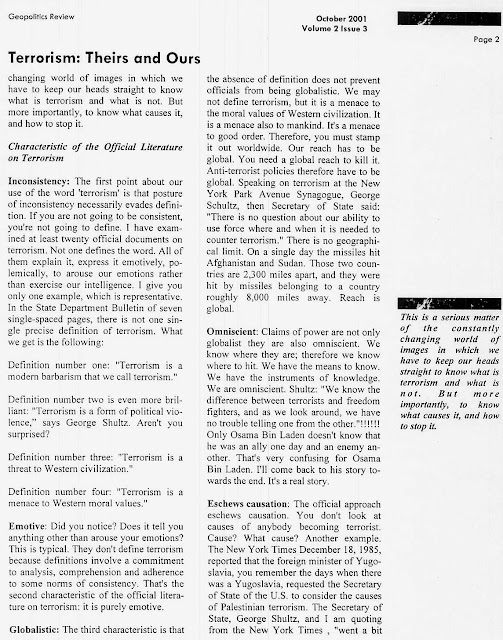