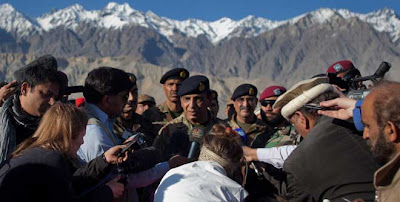 Pakistan's army chief Gen. Ashfaq Parvez Kayani, center, talks with reporters after visiting a Siachen area where huge avalanche buried more than 125 Pakistani soldiers, at Skardu on Wednesday. – Photo by AP - SKARDU: Pakistan’s powerful army chief Wednesday said he would like to see the country spend less on defence, arguing that national security depended on development as much as on protecting borders. Chief of the Army Staff, General Ashfaq Kayani, said “peaceful coexistence” with arch-rivals India was vital to both countries and the welfare of the people should be a priority. The nuclear-armed neighbours have fought several wars since independence in 1947 and both spend heavily on their military while millions of their people languish in poverty. “Peaceful coexistence between the two neighbours is very important so that everybody can concentrate on the well-being of the people,” he told reporters. The general was speaking at Skardu airport in northern Pakistan after visiting the remote Gayari army base in disputed Kashmir, which was hit by a massive avalanche on April 7.
Pakistan & India Should Bilaterally Resolve Siachen Issue: COAS Ashfaq Parvez Kayani 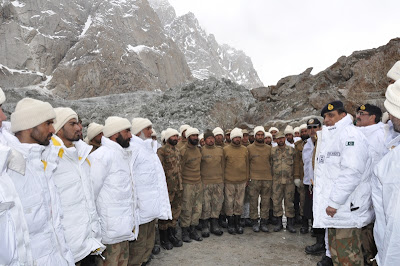 Rescuers are still searching for nearly 140 people buried by the mass of snow and rock at the camp, which lies around 4,000 metres (13,000 feet) above sea level. Pakistan and India invest significant resources in maintaining a military presence on the Siachen Glacier — dubbed “the world’s highest battleground” — and the tragedy has sparked lively debate about the human and financial cost of defending an uninhabitable patch of snow and rock. Kayani said soldiers would do their duty come what may, but defending borders should not be the country’s sole priority. “We in the army understand very well that there should be a very good balance between defence and development. You cannot be spending on defence alone and forgetting about development,” he said. “Ultimately the security of a country is not only that you secure boundaries and borders but it is when people that live in the country feel happy, their needs are being met. Only in that case will a country be truly safe.” He said national security should be a comprehensive concept. “And therefore we would like to spend less on defence, definitely,” he said. “Any country should do the same — more focus should be on the welfare of the people.” Pakistan has spent more than half its history since independence under military rule and Kayani is widely regarded as the most powerful man in the country. He said the decades of enmity between India and Pakistan should be resolved through negotiation and stressed the urgency of halting the damage to the environment caused by troop deployment on the Siachen Glacier. “Ultimately it’s going to affect the River Indus adversely and we understand water is important and water management is very important,” he said. Kashmir has been the cause of two wars between India and Pakistan and the nuclear-armed rivals fought over Siachen in 1987, though guns on the glacier have largely fallen silent since a peace process began in 2004. REFERENCE: Kayani urges less spending on defence AFP http://dawn.com/2012/04/18/kayani-calls-for-talks-with-india/
Posted by Aamir Mughal at 1:21 PM