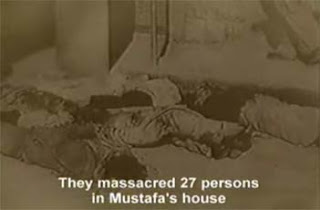 "Chief Justice Iftikhar Mohammad Chaudhry has been nominated for the Nobel Prize", said SCBA President, Aitzaz Ahsan, which, he added, was a great honour not only for him but for the entire country.

Lets not make Nobel Prize a Criteria to Honour Chief Justice Iftikhar Muhammad Chaudhary because the NOBEL PRIZE MAFIA had also awarded Nobel Prize to a known Butcher i.e. Notorious Zionist Terrorist i.e. Menachem Begin, Prime Minister of Israel in 1978. I wonder if anybody in Pakistan even know about the Massacre at Deir Yassin - Palestine in 1948 [read the quote of Einstein published in The New York Times below agaisnt this massacre]? The massacre [OF UNARMED NON-COMBATANTS PALESTINIANS OLD MEN, CHILDREN AND WOMEN] was planned and conducted by Menachem Begin.
Lets have a quick look at the Criteria The Norwegian Nobel Committee had set to award Nobel Prize of Peace to a Butcher of Innocent Men, Women and Children:

The Irgun: Palestine 1931-48
[1931] Irgun Zvai Leumi (National Military Organization) was founded in Jerusalem; led by Avraham Tehomi, it advocated armed Jewish insurrection against British rule and war against Palestinian Arabs.
[1943] Menachem Begin became leader of the Israeli terrorist Irgun Zvai Leumi (National Military Organization), which was engaged in a campaign against the British in Palestine.
[1946] King David Hotel bombing (July 22): Irgun Zvai Leumi terrorists, commanded by Menachem Begin, bombed the British office wing of Jerusalem's King David Hotel, killing 91 people, 17 of them Jews. Among other Irgun terrorist actions was the bombing of the British Embassy in Rome.
Later Menachem Begin won Nobel Peace Prize.
It was 48 years ago, on Jan. 4, 1948, when Jewish terrorists drove a truck loaded with explosives into the center of the all-Arab city of Jaffa and detonated it, killing 26 and wounding around 100 Palestinian men, women and children.1 The attack was the work of the Irgun Zvai Leumi—the "National Military Organization," also known by the Hebrew letters Etzel—the largest Jewish terrorist group in Palestine. The Irgun was headed by Revisionist Zionist Menachem Begin and had been killing and maiming Arabs, Britons and even Jews for the previous 10 years in its efforts to establish a Jewish state. This terror campaign meant that at the core of Revisionist Zionism there existed a philosophical embrace of violence. It was this legacy of violence that contributed to the assassination of Israeli Prime Minister Yitzhak Rabin on Nov. 4, 1995.
The Irgun was not the only Jewish terrorist group but it was the most active in causing indiscriminate terror in pre-Israel Palestine. Up to the time of the Jaffa attack, its most spectacular feat had been the July 22, 1946 blowing up of the King David Hotel in Jerusalem, with the killing of 91 people—41 Arabs, 28 Britons and 17 Jews. The other major Jewish terrorist group operating in Palestine in the 1940s was the Lohamei Herut Israel , "Fighters for the Freedom of Israel," Lehi in the Hebrew acronym, also known as the Stern Gang after its fanatical founder Avraham Stern. Two of its more spectacular outrages included the assassination of British Colonial Secretary Lord Moyne in Cairo on Nov. 6, 1944, and the assassination of Count Folke Bernadotte of Sweden in Jerusalem on Sept. 17, 1948. Both groups collaborated in the massacre at Deir Yassin, in which some 254 Palestinian men, women and children were slain on April 9, 1948. Palestinian survivors were driven like ancient slaves through the streets of Jerusalem by the celebrating terrorists.
Yitzhak Shamir was one of the three leaders of Lehi who made the decision to assassinate Moyne and Bernadotte. Both he and Begin later became prime ministers and ruled Israel for a total of 13 years between 1977 and 1992. They were both leaders of Revisionist Zionism, that messianic group of ultranationalists founded by Vladimir Zeev Jabotinsky in the 1920s. He prophesied that it would take an "iron wall of Jewish bayonets" to gain a homeland among the Arabs in Palestine.5 His followers took his slogan literally. Begin and the Revisionists were heartily hated by the mainline Zionists led by David Ben-Gurion. He routinely referred to Begin as a Nazi and compared him to Hitler. In a famous letter to The New York Times in 1948, Albert Einstein called the Irgun "a terrorist, rightwing, chauvinist organization" that stood for "ultranationalism, religious mysticism and racial superiority."6 He opposed Begin's visit to the United States in 1949 because Begin and his movement amounted to "a Fascist party for whom terrorism (against Jews, Arabs, and British alike), and misrepresentation are means, and a 'leader state' is the goal," adding:
Mohammed Tareq Al-Khadra, who has been a direct witness to much of the brutal hatred exhibited by the Zionist supremacists, describes this in the book "Zionist Massacres ... Committed Against the Palestinian Arab People in the 20th Century." He writes,
"Terrorism is considered the main pillar on which the Zionist movement rested for occupying Palestine. Since the 1930s, the Zionist invaders considered that Palestine should be emptied of its indigenous population, the Palestinian Arabs, so that they can establish their artificial entity on the land of Palestine without instances of future obstacles. ... The series of massacres in Palestine did not cease with the creation of the Zionist entity. It, rather, increased in violence and brutality. During that time, the Zionist occupiers perpetrated many grisly massacres against our people, rendering homeless hundreds of thousands of them."
This book then documents literally hundreds of such massacres committed by the Zionist hatemongers. "Al-Quds Massacre--29 December 1947. The Irgun terrorist gang threw a barrel full of explosives near Bal Al-Amood in Jerusalem, killing 14 Arabs and injuring 27.... Al Quds Massacre--30 December 1947. The Irgun terrorist gang hurled a bomb from a fast moving car, killing 11 Arabs.... Balad El-Sheikh Massacre--31 December 1947 to 1 January 1948. On New Year's Eve, a joint force composed of the First Battalion of the Palmach and of the Carmeli Brigade led by Chaim Avinoam attacked the village, killing 60 Arabs.... Jaffa Massacre--4 January 1948. Stern Zionist gang threw a bomb at a crowded square in Jaffa, killing 15 and injuring 98.... The Massacre of the 'Old Government House' in Jaffa. On 4 January 1948, the Irgun Zionist gang placed a car filled with explosives adjacent to the Old Government House. The blast destroyed the building and everyone in its vicinity. Thirty Arab! s were murdered, others injured...."
The list goes on. Later, it becomes like a diary of who died in unchecked Zionist atrocities. One day after another, it lists many of those who have been murdered, hundreds upon hundreds of such incidents. Take the date 15 November 2000, for instance:
Terrorism and the origins of Israel—Part 1 By Jean Shaoul 21 June 2003 The Stern Group