Bold and Excellent Step of Mr. Nawaz Sharif on Balochistan. 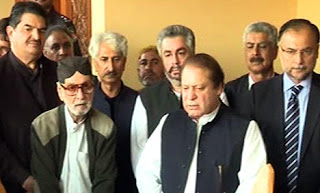 KARACHI: PML-N president Nawaz Sharif held a meeting with BNP head Ataullah Khan Mengal, Geo News reported. Speaking to the media after the meeting Mengal said they had suffered the consequences of their past mistakes and those dying in Balochistan were also human beings. “The existing conditions have led to Balochistan reaching the point of no return,” Mengal said adding that the situation was not in his control anymore and talks would need to be held with the youth present on the mountains of the province. The BNP head criticised the atrocities which were taking place in Balochistan and questioned why there was no action by the Army. Nawaz Sharif said Mengal’s concerns were legitimate and atrocities were being committed in Balochistan. “My party will fight the case for Balochistan. We love Balochistan and it is an important part of Pakistan,” Sharif said. REFERENCE: Balochistan at point of no return: Ataullah Khan Mengal http://www.thenews.com.pk/NewsDetail.aspx?ID=28946
Monday, December 19, 2011, Moharram-ul-Haram 23, 1433 A.H. Updated at: 1740
http://jang.com.pk/jang/dec2011-daily/19-12-2011/u90632.htm 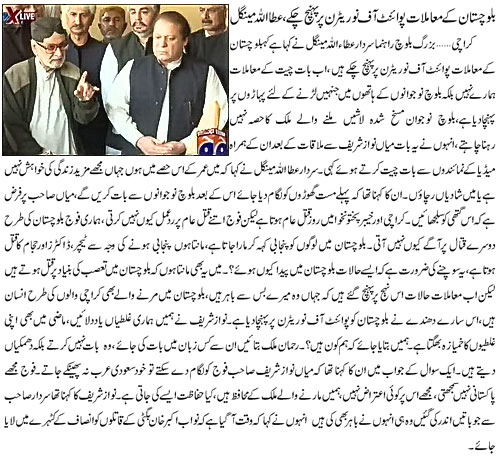 ISLAMABAD: The British government has refused to process warrants against former president Pervez Musharraf in the Benazir Bhutto assassination case, issued by an anti-terrorism court of Pakistan, DawnNews reported. The British Foreign Office informed the Pakistani government that the arrest warrants cannot be processed because there is no official agreement signed between the two countries on prisoner exchange. However, the British Prime Minister David Cameron during his visit to Pakistan had assured Pakistan’s request would be processed. REFERENCES: UK refuses to handover Pervez Musharraf DAWN.COM April 19, 2011 http://www.dawn.com/2011/04/19/uk-refuses-to-handover-pervez-musharraf.html  Warrants issued for Musharraf By Mudassir Raja | From the Newspaper February 13, 2011 http://www.dawn.com/2011/02/13/warrants-issued-for-musharraf.html 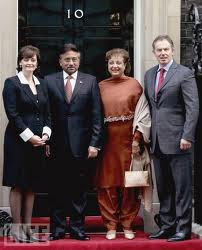 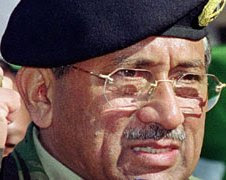 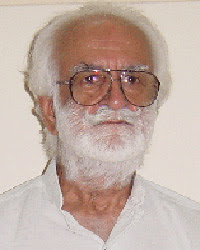 NEW YORK: President All Pakistan Muslim League (APML) and former president Pervez Musharraf, criticizing PML-N’s Nawaz Shaif said, he made a blunder as he messed with four ex-army chiefs, two presidents and the chief justice during his government, Geo News reported Sunday. Musharraf was addressing APML’s mass gathering here on Sunday. Former President, responding to threats of filing a lawsuit incessantly posed to him by Nawaz Sharif, said, “As Nawaz knows that neither will he regain power nor will he be able to try me in a court of law therefore he takes resort to blow this trumpet time and again.” He said he doesn’t regret killing of Nawab Akbar Bugti and attack on Lal Mosque and neither will he seek apology over those actions, adding that he was ready to replicate all what he did during his tenure in the face of similar situation. Musharraf said, on one hand Nawaz Sharif chant slogan of ‘Jaag Punjabi Jaag’ to accumulate votes in Punjab and on the other hand, he has worn criminal silence over killings of Punjabis in Balochistan. Also, Musharraf alleged Nawaz Sharif of handing refuge to Talal Bugti in Lahore whom (Bugti) he termed ‘lawbreaker’. The supporters of PML-N and APML were also present on the occasion and were chanting slogans against chiefs of both parties. REFERENCE: Don’t regret Bugti’s murder: Musharraf Updated at: 1150 PST, Sunday, November 07, 2010 http://www.thenews.com.pk/latest-news/4448.htm  Don’t regret Bugti’s murder: Musharraf Updated at: 1217 PST, Sunday, November 07, 2010 http://www.geo.tv/11-7-2010/74006.htm
Former Chief of the Army Staff General (R) Pervez Musharraf Justifies the "Murder" of Sardar Akbar Bugti 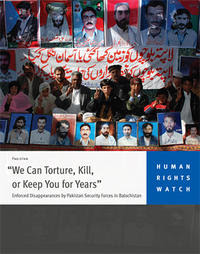 The 132-page report documents dozens of enforced disappearances, in which the authorities take people into custody and then deny all responsibility or knowledge of their fate or whereabouts. The report details 45 alleged cases of enforced disappearances, the majority in 2009 and 2010. While hundreds of people have been forcibly disappeared in Balochistan since 2005, dozens of new enforced disappearances have occurred since Pakistan returned to civilian rule in 2008. REFERENCE: “We Can Torture, Kill, or Keep You for Years” Enforced Disappearances by Pakistan Security Forces in Balochistan July 28, 2011 http://www.hrw.org/sites/default/files/reports/pakistan0711WebInside.pdf
http://www.hrw.org/reports/2011/07/28/we-can-torture-kill-or-keep-you-years 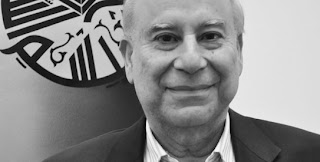 “People in the periphery think they have been neglected, humiliated and culturally looked down upon by the Centre.” – Photos by author Mark Twain once said “travel is fatal to prejudice, bigotry and narrow-mindedness.” Pakistan’s former high commissioner to United Kingdom and the current Ibn Khaldun Chair at the Washington DC-based American University, Professor Akbar S. Ahmed, truly fits in the category of people who believe in seeing and experiencing things to challenge the prejudices of the ignorant. Described by the BBC as “world’s leading authority on contemporary Islam”, Dr Ahmed today travels across the globe to promote inter-faith dialogue and mutual understanding. As a civil servant, career diplomat and one of the world’s foremost anthropologists, he regularly discovers and interacts with many known and often unknown communities of the world. Ahmed has not forgotten home, Pakistan, all these years. He worries for Pakistan but the separatist groundswell in Balochistan, where he served in 1980s consecutively as the commissioner of Quetta, Sibi and Mekran divisions, makes him anxious. As a civil officer, he had an opportunity to closely interact with and learn from some of the most prominent Baloch nationalist and tribal leaders such as Mir Jaffar Khan Jamali (father of Dr Ahmed’s batch-mate Sikandar Jamali and the uncle of the former prime minister Mir Zafarullah Khan Jamali), Nawab Akbar Bugti, former governor Mir Ghaus Baksh Bizenjo and ex-chief minister Jam Ghulam Qadir. He attributes the current turmoil in Balochistan to policymakers’ lack of understanding of the local society and culture. The first rule of good governance, he says, is to know and respect the people of the area where a civil or military officer serves. Former president and army chief General Pervez Musharraf ignored this basic principle of governance while dealing with Balochistan which caused confrontation with Baloch tribes and eventually led to the killing of the powerful tribal chief Nawab Bugti. REFERENCE: We don’t have much time left: Dr Akbar Ahmed Malik Siraj Akbar December 17, 2011 http://www.dawn.com/2011/12/17/we-don%E2%80%99t-have-much-time-left-dr-akbar-ahmed.html
Dr Shahid Masood Exposed in Dr Shazia Khalid Rape Case (Bolta Pakistan 13th July 2011) 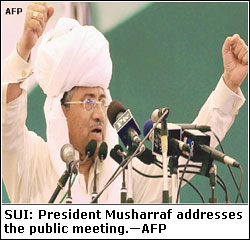 “Bugti’s killing was a tragedy for Pakistan,” he tells Dawn.com, “it was humiliating how President Musharraf threatened to “hit him” like a common criminal. Bugti was a man who is a part of our history and you don’t treat a man of history like this.” In mid 1980s, Dr Ahmed was posted in Balochistan. Soon after his appointment as the commissioner of Mekran Division, he was caught in the midst of an attempt by some non-local religious fanatics who wanted to harm the followers of minority Zikri community. In order to prevent a possible bloodbath, the young administrator boldly reached out to Baloch opposition leader Bizenjo for assistance. For Ahmed, contacts with Bizenjo, a left-wing opposition leader, amounted to alienating President General Zia-ul-Haq while meeting such a senior government official would garner criticism for Bizenjo from his comrades. “He had a wonderful sense of humour,” Ahmed recalls. They had a one-to-one dinner at the commissioner’s house, which they later joked, would get both men in trouble. “It was Bizenjo who helped me behind the scene to calm down the people of Mekran and enabled me to take swift measures to protect the Zikris.” Bizenjo did not forget Ahmed’s good service and praised him openly during an anti-Zia political rally in Sibi where he told the local people how lucky they were to have a committed commissioner like Ahmed. As expected, intelligence officials approached Ahmed and asked why an anti-Zia nationalist leader had publicly praised him. REFERENCE: We don’t have much time left: Dr Akbar Ahmed Malik Siraj Akbar December 17, 2011 http://www.dawn.com/2011/12/17/we-don%E2%80%99t-have-much-time-left-dr-akbar-ahmed.html
Sardar Akbar Bugti on GEO TV - 1 Ahmed hurriedly sent a message to the Baloch demagogue urging him not to be so generous in public praise. Holding a Master’s degree from Cambridge University and a PhD from London University, Ahmed was impressed by what he recalls as the “charisma and wisdom” of Baloch tribal leaders as he newly arrived in Balochistan. “These leaders had many critics but they were men of honour,” he said. “There was a rhythm of life in Balochistan at that time and the Baloch leaders were the jewels of that remarkable society,” he remembers. He met Nawab Akbar Bugti as the Commissioner of Sibi Division of which Bugti’s stronghold Sui was still an administrative unit. The Nawab invited him for dinner at his traditional home. “The Nawab had so much charisma and authority that even his son, Saleem, who was a minister himself did not eat with us and instead served dinner to me as their honoured guest,” he recalls. However, what inspired Ahmed about Bugti was his knowledge of history and different cultures. They spoke about politics, history, tribes and traditions late into the night. “We talked about Ibn Khaldun and I asked myself which Pakistani politician would know about Ibn Khaldun and here was a Baloch tribal chief discussing Ibn Khaldun and his sophisticated theories on society with me in Balochistan’s tribal region.” In Ahmed’s view, it is critical that the federal government should understand how to deal with the Baloch. As an officer in the area, he used to tell his junior officers that it did not matter if they had been educated at Oxford or Cambridge universities. What mattered was the respect they showed to the locals. REFERENCE: We don’t have much time left: Dr Akbar Ahmed Malik Siraj Akbar December 17, 2011 http://www.dawn.com/2011/12/17/we-don%E2%80%99t-have-much-time-left-dr-akbar-ahmed.html
Sardar Akbar Bugti on GEO TV - 2 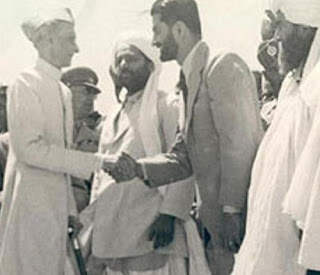 “I’d tell my officers that you have come to their (Baloch), we are privileged to serve them. Don’t take their material poverty as spiritual poverty.” However, he regrets that several officials mistreated the locals. The veteran scholar, who is also the first Distinguished Chair of Middle East and Islamic Studies at the US Naval Academy, says that news of kidnappings, torture and murders by security forces in Balochistan shock him. Contemplating the repercussion of mistreating different ethnic groups, Ahmed warns that a country like Pakistan, which experienced dismemberment in 1971 must pay attention to the demands of people living in the periphery. “Right now we are in a state of civil war in Pakistan,” he says, “People in the periphery think they have been neglected, humiliated and culturally looked down upon by the Centre. This is absolutely the same thing we did with the Bengalis. Pakistan is in a very fragile condition. Both civil and military leadership must urgently show wisdom and vision to come out of this situation.” Increasing tensions in Balochistan between civilians and the security forces is another area which Ambassador Ahmed thinks urgently needs policy review. He describes assaults by security forces and cases of torture as ‘sadism’ and ‘foolishness.’ REFERENCE: We don’t have much time left: Dr Akbar Ahmed Malik Siraj Akbar December 17, 2011 http://www.dawn.com/2011/12/17/we-don%E2%80%99t-have-much-time-left-dr-akbar-ahmed.html
Sardar Akbar Bugti on GEO TV - 3 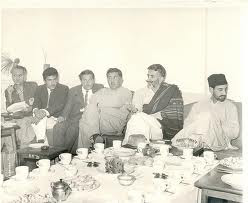 Ahmed blames Musharraf’s “rash actions” for subverting the very foundations of an already shaky structure in Pakistan. The ordinary Pakistani soldier is frustrated and struggling to survive in that chaotic system. He says Pakistan cannot survive without Balochistan. “We can’t afford to make the Baloch feel like second class citizens. Their demands are valid and some of these demands have been overlooked for several. Islamabad should make urgent accommodation with the Baloch. You can’t fool around with them. One day you offer them talks and the next day you kill their leaders. They should be treated as equal partners in the federation.” While talking about the distance between the Center and the largest province, he appeals to the powers that be “to stop the torture and the killing because we don’t have much time left.” REFERENCE: We don’t have much time left: Dr Akbar Ahmed Malik Siraj Akbar December 17, 2011 http://www.dawn.com/2011/12/17/we-don%E2%80%99t-have-much-time-left-dr-akbar-ahmed.html
Posted by Aamir Mughal at 12:44 PM