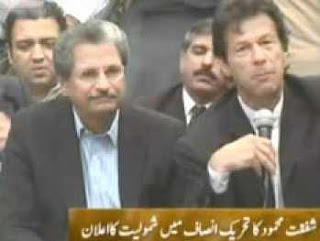 On 13 December 2011, one of the Alleged Senior Correspondent Mr. Kamran Khan of The News International, Daily Jang and Contributor to The Washington Post and GEO TV while talking to a known turncoat (Lota) Mr. Shafqat Mahmood alleged that many Ill reputed politicians are joining Imran Khan's party and ultimately this would harm Imran Khan's reputation and his party's as well. Kamran Khan conveniently forget to mention that Mr. Shafqat Mahmood is also one such person who earlier had served PPP, and then Farooq Laghari Caretaker Cabinet in 1996, and then also served General Pervez Musharraf's Illegal Martial Law Regime and Shafaqt Mehmood while serving Illegal Martial Law Regime of Musharraf had violated article 6 of 1973 constitution of Pakistan and committed a crime which is punishable by death. Mr. Kamran Khan without any evidence also attacked Former IB Chief, Major (Retd) Mr. Masood Sharif Khan Khattak. Lets hope Kamran Khan still remember his own dirty and third class past which is riddled with black mailing and Fifth Columnist Activities also full of Yellow Journalism. Kamran Khan (Senior Correspondent of The News International/Jang Group of Newspapers/GEO TV and Washington Post) was one of the asset of Brigadier (R) Imtiaz of Cold War Days and after the end of Cold War Mr Kamran Khan remained in touch with Brigadier (R) Imtiaz, he was a regular guest of Brigadier (R) Imtiaz when he became Director Intelligence Bureau and used to meet him regularly in his office way back in 1990/1991. Turncoat (Lota) Shafqat Mahmood with Imran Khan! http://chagataikhan.blogspot.com/2011/11/turncoat-lota-shafqat-mahmood-with.html  Anti Pakistan Kamran Khan (Jang) VS EX IB Chief Masood Sharif Khan Khattak http://chagataikhan.blogspot.com/2011/12/anti-pakistan-kamran-khan-jang-vs-ex-ib.html One can differ with the politics of Mr. Masood Sharif Khan Khattak (I proudly say that he was my boss and also proudly say that I have the honour to serve Pakistan under him), I have also differed with my Former Boss on his joining PTI and its Chief Buffoon Imran Khan but I have given reason not just wild rhetoric and wrongfully accused a person who valiantly served not only Pakistan Armed Forces as a Major but also one of its Intelligence Agency. 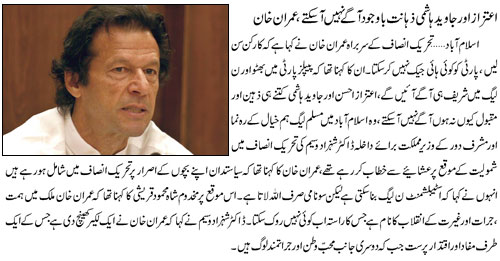 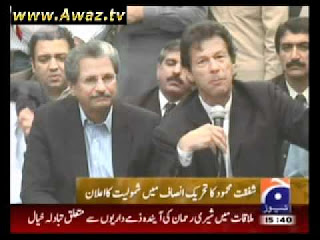 ISLAMABAD: As Pakistan Tehrik-e-Insaf (PTI) is flooded with newcomers, the appointment of a fresh recruit, Shafqat Mehmood, as secretary information has raised many eyebrows as he was one of the ardent critics of Imran Khan, terming him a “signal failure”. In a strange twist of fate, Shafqat Mehmood has replaced Omer Sarfraz Cheema, as secretary information who had been regularly sending rejoinders to Shafqat’s diatribe against Imran Khan, not realising that this man would soon be grabbing his position as the party grows in size and space. Shafqat wrote in an article on Imran that as a “westernised liberal person” while he was railing “against something called western culture, which was a straight forward rejection of modernisation.” His article published in The News on May 15, 2009 titled “Imran Khan’s strange politics” ( http://www.thenews.com.pk/TodaysPrintDetail.aspx?ID=177589&Cat=9&dt=5/15/2009 ) and Omer’s subsequent rejoinder defending Imran, are quite instructive to determine how the wind of change leaves an impact on hearts and minds. Lauding his contribution in sports and social work in that article, Shafqat then started counting Imran’s shortcomings: “When it comes to politics and policy though, the same Imran is unfortunately a signal failure.” “It can be truly said of him that he never misses an opportunity to miss an opportunity,” wrote Shafqat about Imran. He was probably right as he never missed an opportunity to grab a good position. A former bureaucrat, Shafqat was joint secretary in the Prime Minister’s Secretariat when appointed Special Assistant to PM Benazir Bhutto, then got elected as PPP senator, later took oath in President Farooq Laghari’s caretaker cabinet after Benazir was sent home. He didn’t stop here. Shafqat also served under Pervaiz Musharraf in the Punjab’s cabinet. But when it came to attacking Imran, he criticised him for joining hands with Musharraf in his early days. In Shafqat’s word, Imran “flip-flopped with Musharraf — supporting him in the rigged referendum, opposing him in the ensuing general election — and got the worst of both worlds.” By the time, his article was published in May 2009, Shafqat was voicing support of Mian Nawaz Sharif while lambasting Imran for foolish choices and missing opportunities. He continued: “He (Imran) could have teamed up with Nawaz Sharif in 1997 and got his party a presence in parliament. He did not.” A politician should know, he went to explain, which battles can be won and which are a lost cause. Shafqat then thought that “Imran is on the wrong side of history.” His frustration against Imran was also based on the latter’s stance on militancy as PTI chief was opposed to army operation in tribal areas and Swat and thought that Imran is opponent of modernisation. According to Shafqat, Imran’s biggest policy blunder was his stance on militants: “But, all these mistakes pale in comparison when measured up against his obsessive, single track refusal to understand that these barbarian hordes targeting Fata and Malakand division are a threat to our country. He has just one mantra that this is America’s fault, America’s fault, America... etc. America has contributed to it but is that the only problem we confront?” Terming himself a westernised liberal, he wrote: “If he does not want to believe a ‘westernised liberal’ like me, he should read Saleem Saafi in Jang or others that know these people well.” At the end of his article, he urged Imran to stand with the people and armed forces. Omer’s job at the time was to defend party leadership’s policy, right or wrong, that he did through issuing a rejoinder published four-days later ( http://www.thenews.com.pk/TodaysPrintDetail.aspx?ID=178276&Cat=11&dt=5/19/2009 ), not realising that this man would usurp his position doing the same job, no matter it is intellectually right or wrong. Responding to a set of queries, Shafqat told The News that he now has had a change of heart towards Imran and that he has “always liked Imran” and his misunderstandings about PTI chief removed after having detailed sittings with him. “Imran is a good politician. The change we dream of is only possible through him,” said Shafqat whose opinion has transformed now. Imran has two essential qualities a leader must possess: honesty and determination, he explained, and clarified that the slot he has been given was not his dream position as he wanted to focus on policy matters. Talking about the above-quoted article, Shafqat said he had lambasted Imran for opposing operation against militants without clearly understanding what PTI chief really meant. “But detailed discussions later on convinced me about Imran’s vision on how to combat militancy,” he said. Asked about his speculative plan of joining PML-N in 2009, Shafqat acknowledged that he had several meetings with the N-leadership but those were all about policy matters and he was invited as an analyst, not a potential new entrant. He acknowledged working under Musharraf but declared it as a wrong decision. Shafqat said he had served in bureaucracy and politics but nobody can point fingers towards his financial integrity. REFERENCE: Imran’s new media czar was his strongest critic Umar Cheema Thursday, December 15, 2011 http://www.thenews.com.pk/TodaysPrintDetail.aspx?ID=82447&Cat=2
Shafqat Mahmood Become New PTI Central Information Secretary (Dec 13 2011) 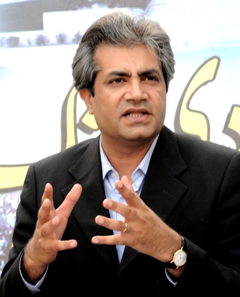 Shafqat Mahmood's article of May 15 titled "Imran Khan's strange politics" is misleading and reflects limited understanding of our history and acceptable norms of democracy practised in functional democracies. The writer's statement that "it is in tough times that a nation's mettle is tested and we have not faced such challenges since 1971" is an indictment against the very premise that the military option will lead to a solution in Swat that will save the federation. One need not be reminded that despite the endorsement of military operations against Bengali insurgents by most, if not all, West Pakistani opinion-makers of the time, including Zulfikar Ali Bhutto, half of Pakistan was in fact lost. As in 1971, when the Bengalis were demonised and a perception was created in West Pakistan that there was no solution except military action, today our westernised elite are conditioning the nation on the inevitability of such action. As for the writer's assertion that the military "appear to be going about their task unhurriedly and with great care", the fact is that military operations in Swat have brought death, destruction, and dislocation of people on a scale unknown since 1971. If the military operation in Swat was launched to protect the life and property of the people, then why did those who were to be protected had to flee for their lives from the indiscriminate shelling and bombing? Counterinsurgency operations are meticulously planned and directed primarily to de-capacitate the leadership of the insurgents. The use of artillery and the air force can only be justified under the doctrine of 'collective punishment'. It took decades of negotiations, agreements, and repeated breakdown of ceasefires, before a final settlement was reached and peace was achieved in Northern Ireland. Never, during the decades of insurgency in Northern Ireland, did the British employ the military tactics now being employed in Swat or for that matter the Indians in occupied Kashmir or to suppress any of a number of insurgencies now raging in India. The timing and haste shown by the government in launching the military operations at a time when President Zardari was in the US is indicative that it was done under US pressure. Furthermore, the 'barbarian hordes', to borrow the writer's phrase, were unknown prior to 9/11. They are obviously a creation of a policy pursued by General Musharraf and subsequently followed more relentlessly by the NRO-manufactured leadership, which in effect meant the US outsourcing its war on terror to us. The outsourcing strategy meant that our army was to be used against the militants in FATA, a strategy both cost-effective and more domestically acceptable to the US compared to direct US military intervention. As for the writer's allegation that Imran Khan 'rails' against western culture and that this was a 'straightforward rejection of modernisation' one can only say that the Quaid-e-Azam and Allama Iqbal are Imran Khan's role models and neither could be seen as 'Taliban supporters'. Without making an effort to travel to the tribal areas to acquire a full understanding of their devolved social system through the jirgas which gave them freedom, the writer depicts Pashtuns as 'semi-literate and simple rural people,' a polite way of demonising them. Rather than lecturing society sitting in their cushy air-conditioned abodes in Islamabad and Lahore, our self-styled opinion-makers should, at the bare minimum, visit and talk to the refugees of Swat if not spend a few nights with them to understand their plight and the human cost of such military operations. Omar Sarfraz Cheema Central information secretary, Pakistan Tehrik-e-Insaf Lahore. REFERENCE: PTI rejoinder Tuesday, May 19, 2009 http://www.thenews.com.pk/TodaysPrintDetail.aspx?ID=178276&Cat=11&dt=5/19/2009 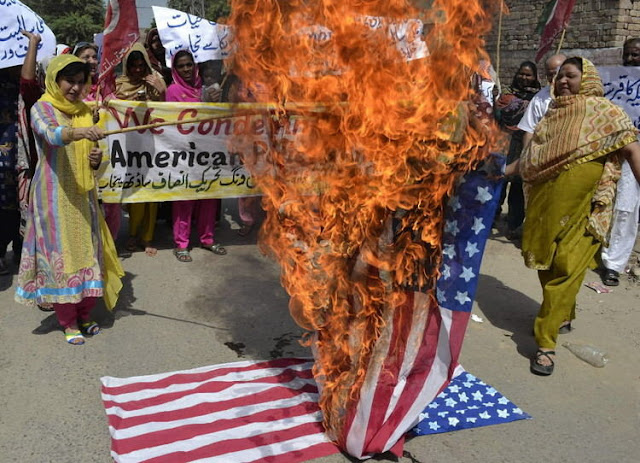 PTI activists torch a US flag during a protest in Lahore 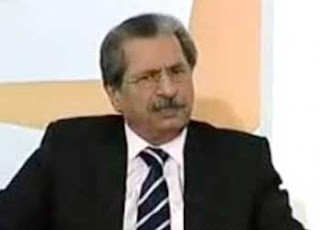