Imran Khan Rally & Some Past History. 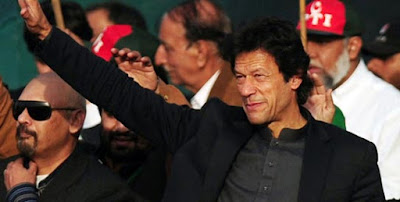 KARACHI: The Imran Khan wave, which the cricketer-turned-politician prefers to call ‘tsunami’, reached Karachi on Sunday with a large turnout at a Pakistan Tehrik-i-Insaaf (PTI) meeting which surprised many political analysts, some of whom termed it one of the largest rallies recently held in the city. Imran Khan was accompanied on the dais by the new entrant to his party, the firebrand Pakistan Muslim League-Nawaz (PML-N) heavyweight Javed Hashmi who had left his party on Saturday to join the PTI bandwagon and former PPP foreign minister Shah Mahmood Qureshi. In his speech, PTI chief Imran Khan dropped a bombshell by announcing that senior PPP leader and another former foreign minister, Sardar Assef Ahmed, had called him earlier in the day to confirm that he was joining his party. Imran Khan touched on his favourite themes, including rampant corruption, people’s misery and economic downslide. But most noticeably, he pledged to address the grievances of the people of Balochistan if his party came to power. He said he would apologise to Baloch people on behalf of their other compatriots for injustices done to them. “We have committed excesses and have treated you like the people of a colony as we did in the case of the people of East Pakistan,” he said. “I pledge that when we come to power, we will give you a special status as West Germany gave to East Germany by diverting all development projects to the latter.” Turning to an emotionally charged crowd of youths, Mr Khan said if his party came to power with the support of people, he would accomplish the dream of the Quaid-i-Azam to turn the country into an Islamic welfare state. He reminded the people that he had never disappointed the nation as a cricketer, built a cancer hospital and a most modern university in a rural area of Mianwali and said he would fulfill their dream of a welfare state with their support. He appealed to the nation to join him to build a new, sovereign and prosperous Pakistan. The PTI chief claimed that he would eliminate much of the corruption in government within 90 days of coming to power. He described corruption as the biggest hurdle to progress. Referring to development and prosperity in Singapore, Malaysia and Turkey, he said they were able to do so by installing honest leadership in power. The cricketer-turned-politician termed the crowd a tsunami and announced that its next stop would be in Quetta on March 23. He said he had decided not to speak against any party, but PML-N chief Nawaz Sharif had given him a challenge to play a 10-over match with him. He advised Mr Sharif to hurry up lest he should be left with men not enough even to form a cricket team. He said he also wanted to play a match with Asif Zardari, but he now stood retired hurt. Welcoming Javed Hashim into the party fold, he announced that another wicket was about to fall as Sardar Assef Ahmed Ali had called him to confirm that he was joining the PTI. REFERENCE: ‘Tsunami’ sweeps Karachi http://www.dawn.com/2011/12/26/imran-vows-to-redress-grievances-of-baloch-people-work-for-islamic-welfare-state-tsunami-sweeps-karachi.html
Imran Khan Supported Military Operation in Swat.

Imran Khan ruthlessly, heartlessly, brutally, and coldly blames the victim of Terrorism for their own death. 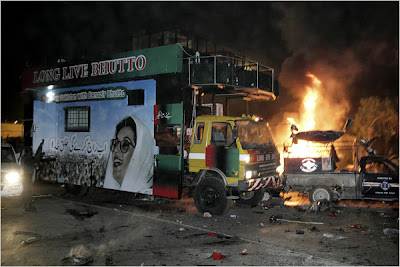 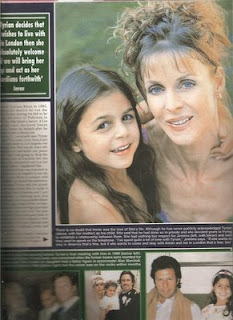 ISLAMABAD, June 12: The Muttahida Qaumi Movement (MQM) on Tuesday filed a reference against Tehrik-i-Insaaf chief Imran Khan to National Assembly Speaker Chaudhry Amir Hussain, seeking disqualification of the TI leader. Speaking at a press conference here, the Parliamentary Leader of the MQM, Dr Farooq Sattar, said that the reference had been filed under Articles 62 and 63 of the Constitution and the Public Representation Act, 1976. Minister for Ports and Shipping Babar Ghauri and MNA Haider Abbas Rizvi were present on the occasion. Mr Sattar said that the Los Angeles Superior Court had declared on July 30, 1997, that Imran Khan was father of a daughter of Anna Luise alias Sita White born out of wedlock. He said the court wrote in its verdict that ?the defendant (Imran Khan) was the father of the minor child (Tyrian Jade) born on June 18, 1992.? The court had further said that Ms Anna Luise would have the sole legal and physical custody of the child, he added. Mr Sattar said that a copy of the US court verdict had been attached with the reference submitted to the Speaker of the National Assembly. He said Imran Khan deserved to be disqualified for being a member of the National Assembly as under the laws of the land no person involved in such extra-marital affairs could contest elections or continue as a member of parliament. Giving details about the reference, MQM leaders said the reference had been prepared under the Rules of Procedure Clause 16 and People's Presentation Act Clause III. Answering a question, he said the speaker was bound to forward the reference to the Election Commission of Pakistan within 30 days and the ECP should announce its decision within 90 days. Earlier, the MQM leaders submitted a copy of the reference in the chamber of National Assembly Speaker Chaudhry Amir Hussain. The MQM leaders parried a question as to why had the MQM not taken action against Imran Khan when the US court had announced its verdict. Federal minister Babar Ghauri said in reply to a question that the MQM could in no way be termed a terrorist organisation. He said that a report of a US think-tank declaring the MQM a terrorist organisation was baseless and must not be given importance as it did not reflect the official position of the government of the United States. He said such think-tanks also kept accusing Pakistan of being a terrorist country. REFERENCE: MQM files reference against Imran By Iftikhar A. Khan June 13, 2007 Wednesday Jamadi-ul-Awwal 27, 1428 http://archives.dawn.com/2007/06/13/top5.htm

From the outset Imran Khan's marriage to Jemima Goldsmith would face the severest of tests. Their contrasting background, age and upbringing meant that it would always be under pressure. At the time of her engagement in 1995, Jemima Goldsmith was a 21 year old socialite, more than two decades younger than Imran Khan. She was the daughter of one of the richest men in the world, Sir James Goldsmith, and from a Jewish background. He had just retired from international cricket, earning legendary status in Pakistan for his role in winning the 1992 cricket world cup. Their different lives prior to marriage meant that both had to make radical changes after their wedding. He would have to abandon the itinerant playboy image acquired during his bachelor years, and she would have to adjust to living in Pakistan and adopting the Muslim faith. Jemima may have come from a wealthy background, but her new husband - a proud man - was not interested in taking any of his father-in-law's money. She would have to get used to living with an extended South Asian family in a middle class Pakistani household in Lahore, with uncertain water and electricity supplies. The tabloid press in Britain reported that she did not even have a washing machine and slept in the same bed as her two sons. Imran Khan may be a cricketing aristocrat who dated some well known British heiresses, but he has never lived a life of grandeur. His father was an engineer who taught him always to watch the financial outgoings. Initially it seemed that she was adjusting to her new lifestyle despite the difficulties, playing a prominent role in her husband's cancer hospital. She also became an ambassador for the United Nations Children's Fund in 1991. But it was not too long before the difficulties emerged. Imran may have abandoned his nomadic cricketing existence, but his time on the road had not come to an end. He was constantly travelling in the early years of their marriage to promote his political career and the Tehreek-e-Insaf party which he founded in 1996. There were reports that Jemima was becoming increasing frustrated over Imran's fledgling political career, and wanted him to spend more time at homeOn top of that, she always seemed to miss Britain - where she had started a designer clothes company - and was reportedly keen for her children to be educated in her homeland. Like her friend Diana Princess of Wales, past girlfriends of her husband always seemed to hover over the marriage. In May 2004, one of those old girlfriends, the millionairess Sita White, died suddenly of a heart attack. Her daughter Tyrian was proven to be Imran Khan's child in 1997. Imran denied he had fathered the little girl until a legal suit proved otherwise. He did not meet Tyrian until she was six years old. Jemima was reported to be "highly upset" about the court case, even though she and Imran are now reported to have developed a close relationship with Tyrian. In the later years of her marriage Jemima spent more and more time in Britain, ostensibly to study but also mixing with celebrity friends including the actor Hugh Grant, Princess Rosario of Bulgaria and supermodels Elle Macpherson and Laura Baily. She celebrated her 30th birthday in February surrounded by supermodels, superstars and society figures, but her husband remained 4,000 miles away in Pakistan. The pressures on her life seemed to mount up in recent years. In January 2001 a mentally ill passenger attempted to seize control of a plane in which she was travelling with her family in Africa. It plunged nearly 10,000 feet before air staff reclaimed control of the plane. The Goldsmith family were all convinced that they were about to die. Just over a year later, a knife wielding burglar broke into her London house - despite multi-million dollar security measures. While all these factors undoubtedly would have placed a strain on the marriage, ultimately the break-up appears due to the differences of east and west. Culturally, socially and financially Imran and Jemima were always worlds apart. . REFERENCE: A parting of the ways By Ivo Tennant, Imran Khan's biographer Last Updated: Tuesday, 22 June, 2004, 16:06 GMT 17:06 UK http://news.bbc.co.uk/2/hi/south_asia/3829829.stm 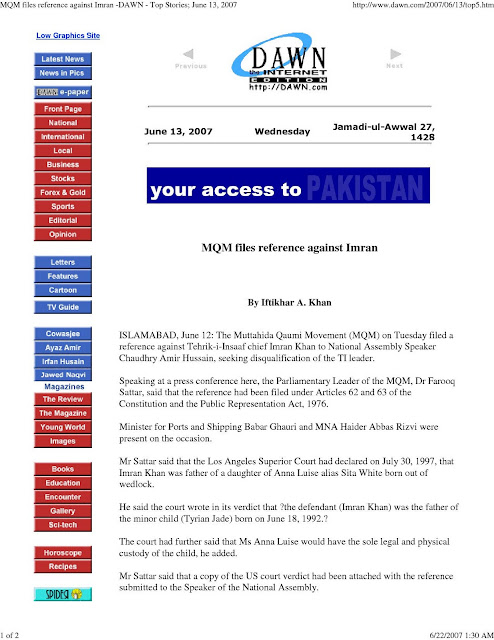 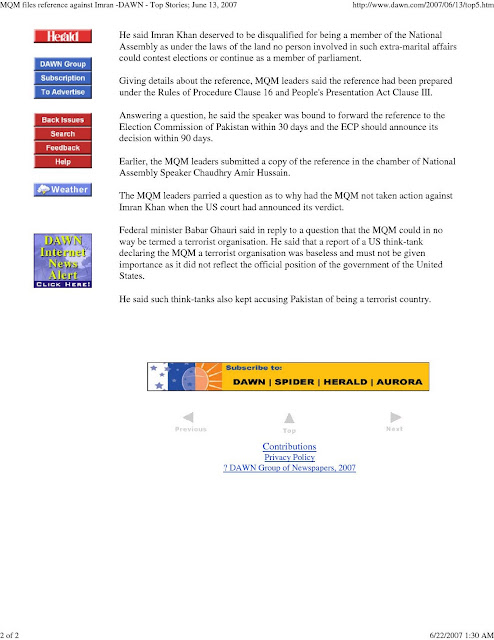 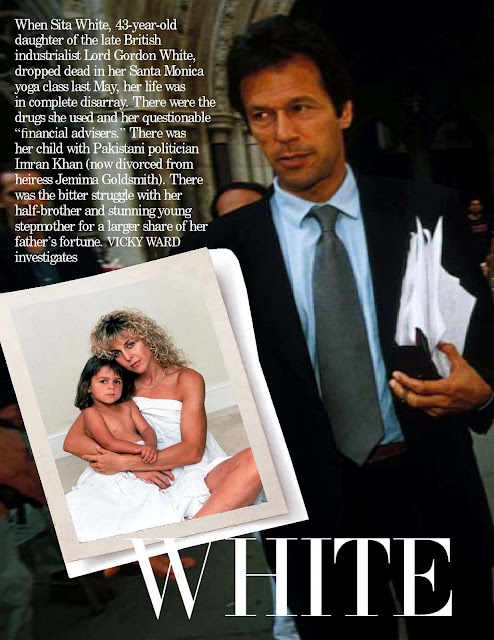 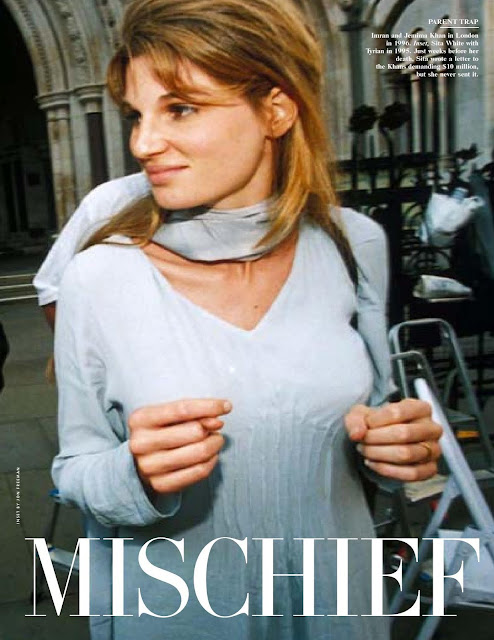 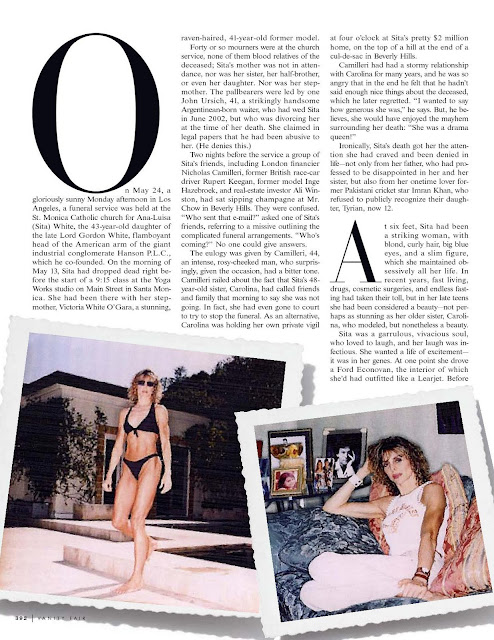 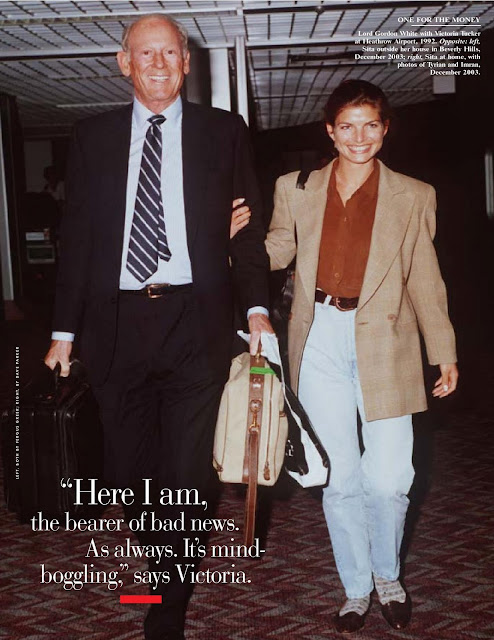 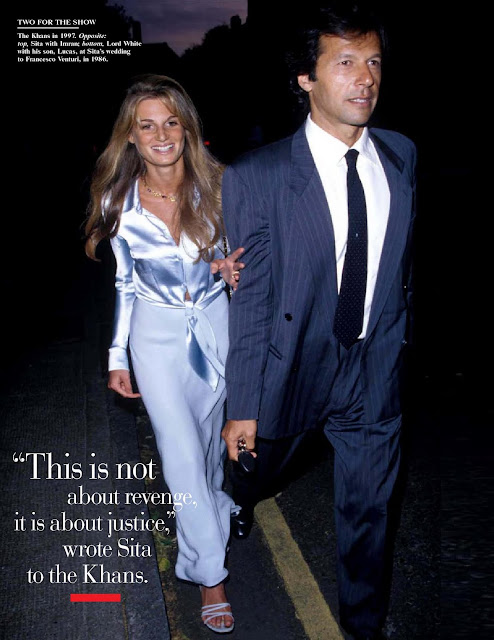 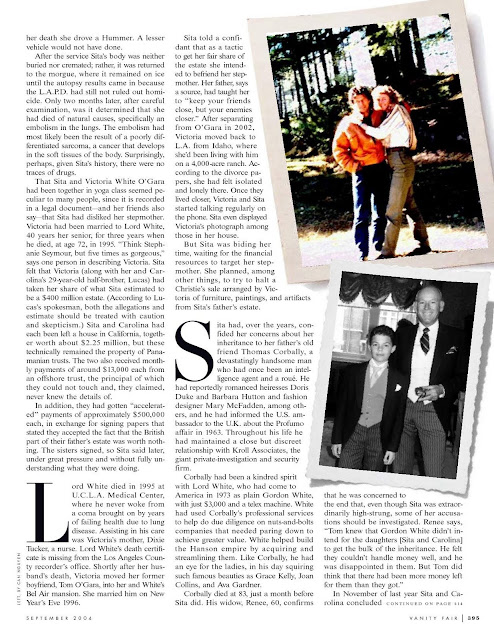 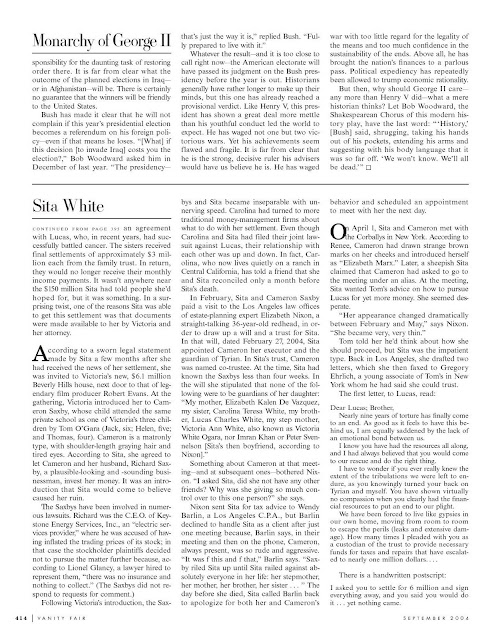 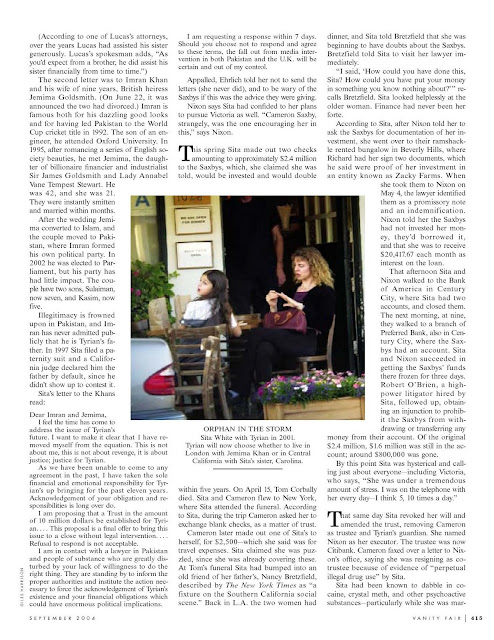 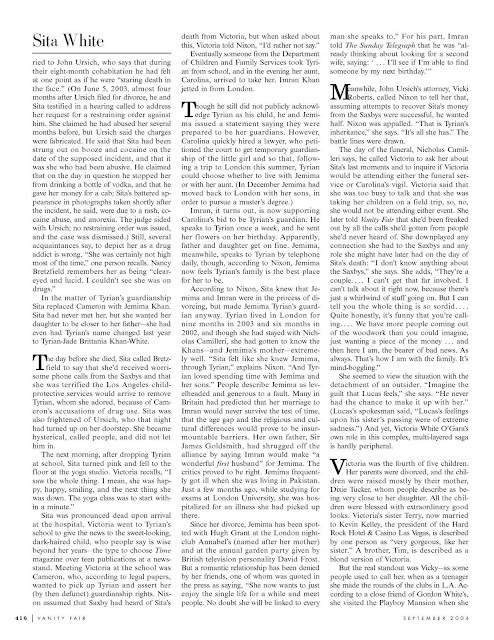 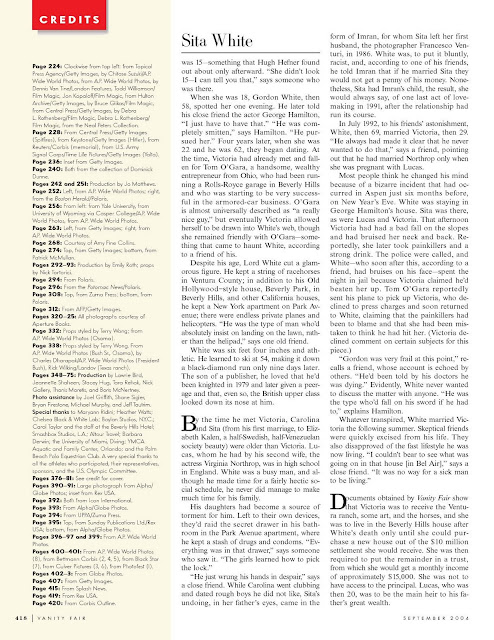 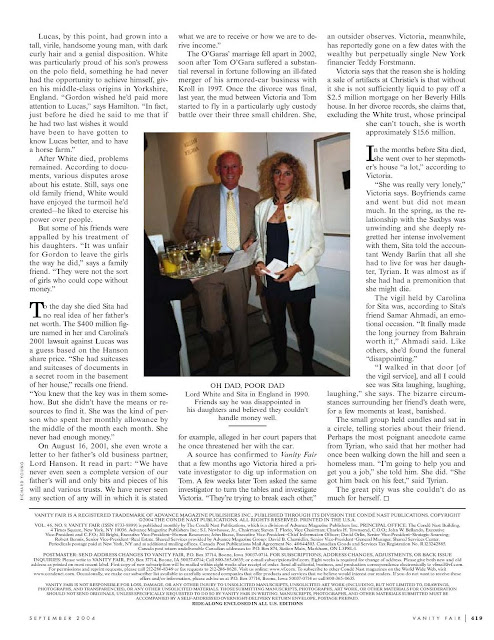