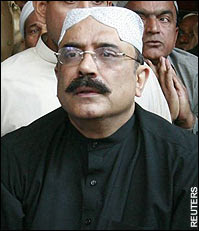 Mr Asif Ali Zardari has recently commenting upon Bhurbhan Declaration that his announcement of resinstatement of judges was a political statement and not a hadith and it could be interpreted in different ways and that was not a big deal.[1]

As per several News Channels teh PPP-PML-N Alliance is no more and PML-Q Forward Bloc or you may say the Reincarnation of General Musharraf League comprising Watto, Neelofar Bakhtiar and Hamid Nasir Chatta [relative of Chaudhary Shujaat Hussain, and Parvez Illahi] is almost ready to replace PML-N Members in the Cabinet and wait another Operation Horse Trading in Punjab to replace Dost Mohammad Khosa. Agreed that PPP didn't use Restore the Judiciary Slogan [Mr Iftikhar Mohammad Chadhary and other Judges of the so-accled Free Judiciary Movement served under General Musharraf and General Musharraf elevated Justice Iftikhar Mohammad Chaudhary under PCO to the Supreme Court] but the thing is that you dont go against Public Sentiment and i.e. Restore the Pre 3 Nov 2007 Judiciary and Restore Pre 12 Oct 1999 Constitution of Pakistan and Asif Ali Zardari is actually doing everything in reverse in the name of Reconciliation and Rapprochement that too the extent of even accepting [by Betraying Late. Ms Benazir Bhutto's soul by accepting Remnants of General Zia. The Remnants of Zia whom Late. Benazir Bhutto (as per her Press Conference of 19 Oct 2007 details in Ref no "2") had held responsible for the destruction of PPP, Democracy and Bhutto Family and above all for the Blast in Karachi in PPP Rally on 18 Oct 2007 wherein 150 innocent people lost their lives] Former Major General [Redt] Mehmood Ali Durrani [Former Military Attache under General Zia from 1978-1982 and then Pakistan's Ambassador to the US under General Musharraf] as Advisor to the PM for National Security [what the hell is that when innocent Pakistanis are not safe from the hands of State and Terrorists as well].

In the name of Reconciliation and Rapprochement PPP and Asif Ali Zardari should now accept Chaudharys of Gujarat, Ejaz ul Haq, Humayun Akhter, and even General Musharraf in PPP as Central Members because PPP leaders have started telling all of us that PML-Q is a Reality

I wonder where has gone the nomenclature of Qatil League which Asif Ali Zardari had used;

On Feb 22, 2008 Former speaker and a key leader of the former ruling PML, Hamid Nasir Chattha who lost the National Assembly election but won a seat in the Punjab Assembly, also met Mr Zardari. PPP spokesman Farhatullah Babar told Dawn that Mr Chattha had come only to offer condolences to Mr Zardari over the assassination of Benazir Bhutto.[3]

Not in a very distant Past Mr Asif Ali Zardari [Co-Chairperson PPP] used to dub PML-Q as the "Qatil League," or the 'Killer League.' The implication was that the politicians allied to President General (R) Pervez Musharraf, were behind the assassination of the PPP chairperson Benazir Bhutto.[4]

So who will decide the definition of Qatil League. I leave it for you. You decide. Or is it that if any of the Q League leader comes to meet with Mr. Zardari then he/she is out of that Qatil definition.

As per Major Retd. Kamran Shafi [Former Advisor to Late Ms Benazir Bhutto] has quite aptly put a fact in his article [that is a sincere advice of a person who is sincere with PPP]

IN HIS OWN WORDS

"No sirs, no. Get off that cloud you are riding and realise that the brilliant Benazir who might have pulled the party out of the problems into which you are forcing it has departed this earth, she is no more. Don’t, for God’s sake, try and become cleverer than half. Keep the promise made in the Murree/Bhurban declaration; for, after all, you did sign it!

While all this argy-bargy goes on with new and ever newer PPP tamashas being reported every single day, the PML-N goes about doing the right thing. The Punjab government is already feeling energised: as you get off the motorway at Thokar Niazbeg you see the petrol and CNG stations being moved back from the land they had encroached upon.

There was even less reason, or call, for Gilani to say that the army also had to defend the ‘ideological frontiers’ of the country. For God’s sake, prime minister! Fifty years have we tried to disabuse the army of its arrogating this duty to itself! And yet you go and do this! What the devil are ‘ideological frontiers’ anyway? Seeing the ugly, hateful place our country has become, hasn’t it had enough of ‘ideology’? An aside here. It appears Sharifuddin Pirzada is still a frequent visitor to the presidency. Asked quite recently why he represented military dictators, he replied that he was a lawyer (gun?) for hire, simple as that. So, who is paying the man now? Has the Commando apportioned massive funds for the presidency’s ‘secret fund’ of which there is no accountability? Or is one of Musharraf’s wealthy arms-dealer friends footing Sharifuddin’s surely considerable bills? [6]

The best solution available to finish this anarchy is that both President General Musharraf and all those Judges Pre 3 Nov and Post 3 Nov 2007 who took under PCO should go [both the parties have politicised three institutions Army, Judiciary and the Symbol of Federation Presidency honourably like in the case of President Late Ghulam Ishaq Khan and Prime Minister Nawaz Sharif had done in 1993. To save Pakistan from more anarchy and chaos they should go voluntarily.

Benazir is no more: understand that By Kamran Shafi [6]