Benazir Bhutto: Before her death - 20 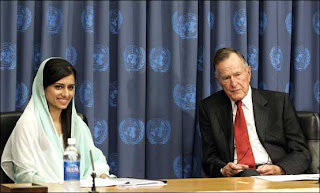 "Ms Hina Khar entered the folds of PPP and managed to get party ticket for a National Assembly seat. Earlier, she was rejected by the PML. [1]

The latest news is this that Former Memebr of Mr. Musharraf's 12 Oct 1999 Revolutionary Cabinet i.e. Lt. General [Retd] Tauqir Zia has joined PPP and he is even provided a ticket as well. Read the details later [The News International story filed by Rauf Klasra]. 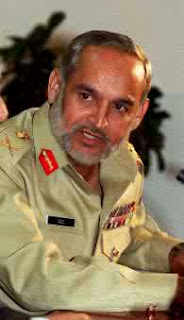 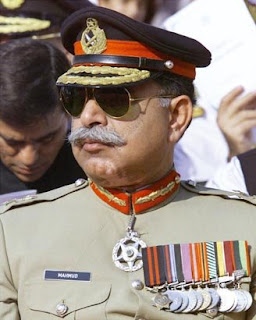 PML-N should also give tickets to Lt. Genral Hamid Gul, Lt. Gen Retd. Javed Nasir and other such Praetorian Guards.

Jamat-e-Islami should try Lt. General Retd Muzaffar Hussain Usmani. If that is not enough pull the bodies of Ayub, Yahyah and Zia to give them appropriate tickets of those political parties which are close to their ideologies.

Strange isn’t it? The charter of democracy signed by Benazir Bhutto and Nawaz Sharif says something else on turncoats and particularly there is clause in that charter which is clearly saying that “we shall not join military regime or any military sponsor government”. One wonder are they [PPP and PML-Nawaz] expecting Martial Law in near future because these two parties have taken many leaders in their fold who were part and parcel and several of them were even Ministers in Musharraf Military Junta [1999-2007]

Read the Charter of Democracy signed by BB and MNS:

Whereas as per several clauses of the so-called Charter of Democracy [signed by Ms. Benazir Bhutto and Mian Nawaz Sharif] the born again Social Contract of the Renaissance Europe says [As per Pakistan Peoples Party's website [latest visited on 4Feb 2007]

We will respect the electoral mandate of representative governments that accepts the due role of the opposition and declare neither shall undermine each other through extra constitutional ways. We shall not join a military regime or any military sponsored government. No party shall solicit the support of military to come into power or to dislodge a democratic government.

To prevent corruption and floor crossing all votes for the Senate and indirect seats will be by open identifiable ballot. Those violating the party discipline in the poll shall stand disqualified by a letter from the Parliamentary Party Leader to the concerned Speaker or the Chairman Senate with a copy to the Election Commission for notification purposes within fourteen days of receipt of letter failing which it will be deemed to have been notified on the expiry of that period.

http://thenews.jang.com.pk/top_story_detail.asp?Id=11579
ISLAMABAD: President Pervez Musharraf’s once trusted colleague, Lt-Gen (retd) Tauqir Zia, who was a part of the team that arrested Nawaz Sharif in the Oct 1999 coup, is now a hot favourite of the PPP to become a parliamentarian from Lahore.

Zia confirmed to The News on phone that he was about to join the PPP and said he was in the process of negotiations to get a party ticket from Lahore. He confirmed that he had already filed his nomination papers from NA-127. Makhdoom Amin Fahim confirmed to The News from Sindh that General Tauqir had contacted the PPP leadership to join the party and wanted a ticket from Lahore. “As I am in my home constituency, I have no idea what the final decision of the party is,” Amin Fahim said. Zia, a former chairman of the Pakistan Cricket Board, will contest on the PPP ticket on the seat for which former governor of Punjab Khawaja Tariq Rahim was to be the PPP candidate. Tariq is said to have refused the PPP ticket after raising objections over the award of ticket to Ali Badr, the son of PPP Secretary General Jehangir Badr, for the provincial assembly seat fearing he might lose the polls.

Ali Badr will, however, remain in trouble as Zia is also negotiating to bring his own running mate for the Punjab PA seat in his constituency. He is believed to have asked the PPP to give the PA ticket to Zahid Bashir, director at Pakistan Cricket Board when Zia was the chairman. Zia had been serving on important positions after General Pervez Musharraf became the Army chief in October 1999. During the Kargil war in 1998, Lt-Gen Tauqir Zia, was the DG Military Operations.

Likewise, on the night Nawaz Sharif was arrested from the Prime Minister House, he was serving as the Corps Commander Mangla, which is considered to be a prize post after the Corps Commander Rawalpindi. After the coup, he was the first Army general to capture the top civilian slot of chairman Pakistan Cricket Board (1999-2003) in place of a widely-respected professional figure Dr Zafar Altaf.

General Tauqir, who was not expecting that the news might reach a journalist before the completion of all the formalities, tried to downplay the importance of this development which might send some shockwaves on the political scene. When asked had he met Benazir Bhutto to give final touches to his decision to join the PPP, General Zia replied that within two or three days, the full picture would be clear. He was of the view that The News should not publish this news unless the things became clear.

Meanwhile, the potential running mate of Tauqir Zia, Zahid Bashir, also confirmed to The News that General Tauqir was in the process of getting the PPP ticket from Lahore. “We are in the negotiations,” Zahid Bashir said. Tauqir Zia faced many controversies as the PCB chairman and resigned twice but his resignation was rejected by President Musharraf. He had to quit in 2003 after a huge controversy when his son was inducted in the Pakistan cricket team.