Benazir Bhutto: Before her death - 8 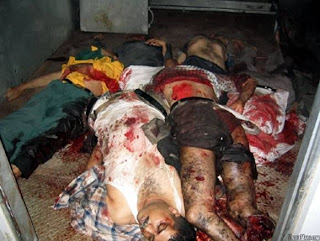 As per the UN High Commissioner for Refugees (UNHCR) reports that 100,000 Iraqis are fleeing the country every month. UNHCR estimates that approximately 700,000 Iraqis are currently living in Jordan and another 600,000 in Syria -- although many experts believe the real numbers are higher, given the numbers leaving every month. It is becoming increasingly difficult also to find room for the hundreds of thousands moving to another location within Iraq. The UNHCR issued a warning on Jan 9 that the scale of internal displacement of Iraqis was beyond the capacity of humanitarian agencies, including the UNHCR. It declared that a humanitarian crisis looms in Iraq beyond that anticipated by aid agencies at the beginning of the US-led invasion in 2003. The UNHCR estimates also that there are more than 1.5 million internally displaced people within Iraq itself.[1] 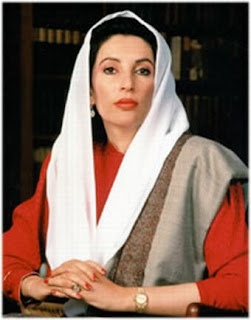 Daughter of the East and Hope for the Democracy i.e. Ms. Benazir Bhutto 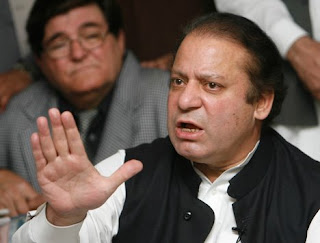 But our so-called Daughter of the East and Hope for the Democracy i.e. Ms. Benazir Bhutto has no shame et all whatsoever, she signs the so-called Charter of Democracy with the Former Prime Minister of Pakistan Mian Nawaz Sharif to finish the Role of Armed Forces from the Politics of Pakistan but secretly makes deal with the very same institution. She doesnot want to participate in the All Parties Conference convened by Nawaz Sharif [even a person like Mumtaz Bhutto a former caretaker Chief Minister in Farooq Laghari's cabinet is going there] but guess what Benazir says that participating in APC would be decided by the Central Committee of PPP. In a country where political parties are being run as personality cults based upon autocratic principles, one feel like puking when Benazir Bhutto, Qazi Hussain Ahmed, Mian Nawaz Shareef and last but not the least Altaf Hussain refer to the so-called Central Working Committee as a policy makers. 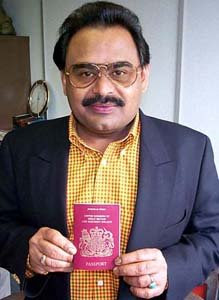 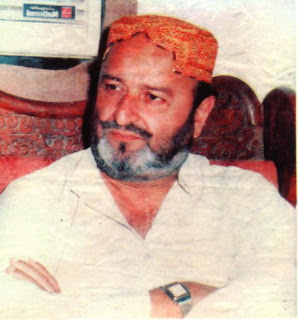 Shame on Qazi Hussain Ahmed and Imran Khan too who before 12 October 1999 used to refer Nawaz Sharif 'a security risk' for the country but now to save their Political Hides they religiously attend Political Meetings of Mian Nawaz Sharif in Lahore and listen to his Telephonic Address from London. 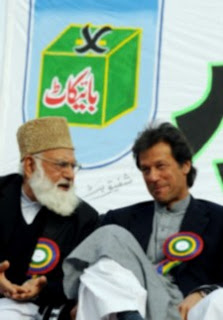 As per Daily Dawn date 30 Jan 2007, Former prime minister Benazir Bhutto and her husband Asif Zardari would attend the White House prayer breakfast together to dispel media reports that they had separated, PPP officials said on Monday, which President George W. Bush is scheduled to address as well. [2]

It would be better that the above couple should prefer to dine with Mongolian Army and Helegu Khan.

Our Political Leaders are worse than Hollywood Celebrities who at least have better Moral Character and compassion for Human Life and Tragedy than our Political and Religious Leadership.

A day or two ago tens of thousands of protesters have demonstrated in Washington to demand the withdrawal of US troops from Iraq. The rally comes days before Congress is to discuss President George W Bush's new strategy for Iraq - including the despatch of 21,500 additional troops. The protesters, chanting "Bring the troops home", were joined by Vietnam War-era protester, actress Jane Fonda. Jane Fonda, the Hollywood actress who angered many Americans by visiting Hanoi in 1972 during the Vietnam War, told the crowd: "I haven't spoken at an anti-war rally for 34 years. But silence is no longer an option." She added: "I'm so sad that we still have to do this, that we did not learn the lessons from the Vietnam War." Fonda was joined by fellow actors Sean Penn and Tim Robbins. [3] 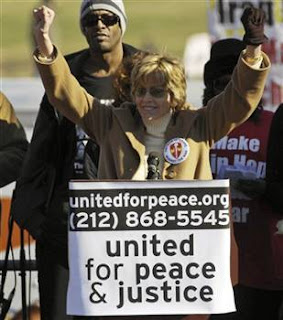 American Actress Jane Fonda Protests against US War against Iraq

Robbins said: "What we need is courage, courage and conviction and we need people to represent the voice of the American people, a very clear voice last November, a voice that said: 'We're done with this war'." Although nearly all Democrats and a growing numbers of Republicans oppose the president's plans, he says, senators have not been able to agree yet on a single non-binding resolution expressing their concerns. [3] 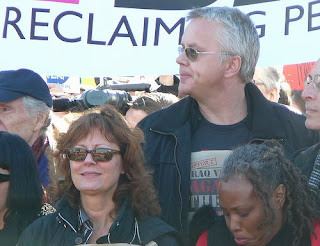 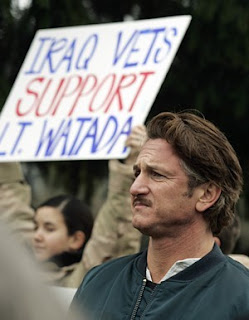 Actor Sean Penn said lawmakers will pay a price in the 2008 elections if they do not take firmer action than to pass a nonbinding resolution against the war, the course Congress is now taking. "If they don't stand up and make a resolution as binding as the death toll, we're not going to be behind those politicians," he said. [3]

Benazir to visit White House with Asif By Anwar Iqbal [2]

Tens of thousands of protesters have demonstrated in Washington to demand the withdrawal of US troops from Iraq. [3]